The Prickly Symbolism of Cactus Fruit in Israel and Palestine - Gastro Obscura
Want to see fewer ads? Become a Member. 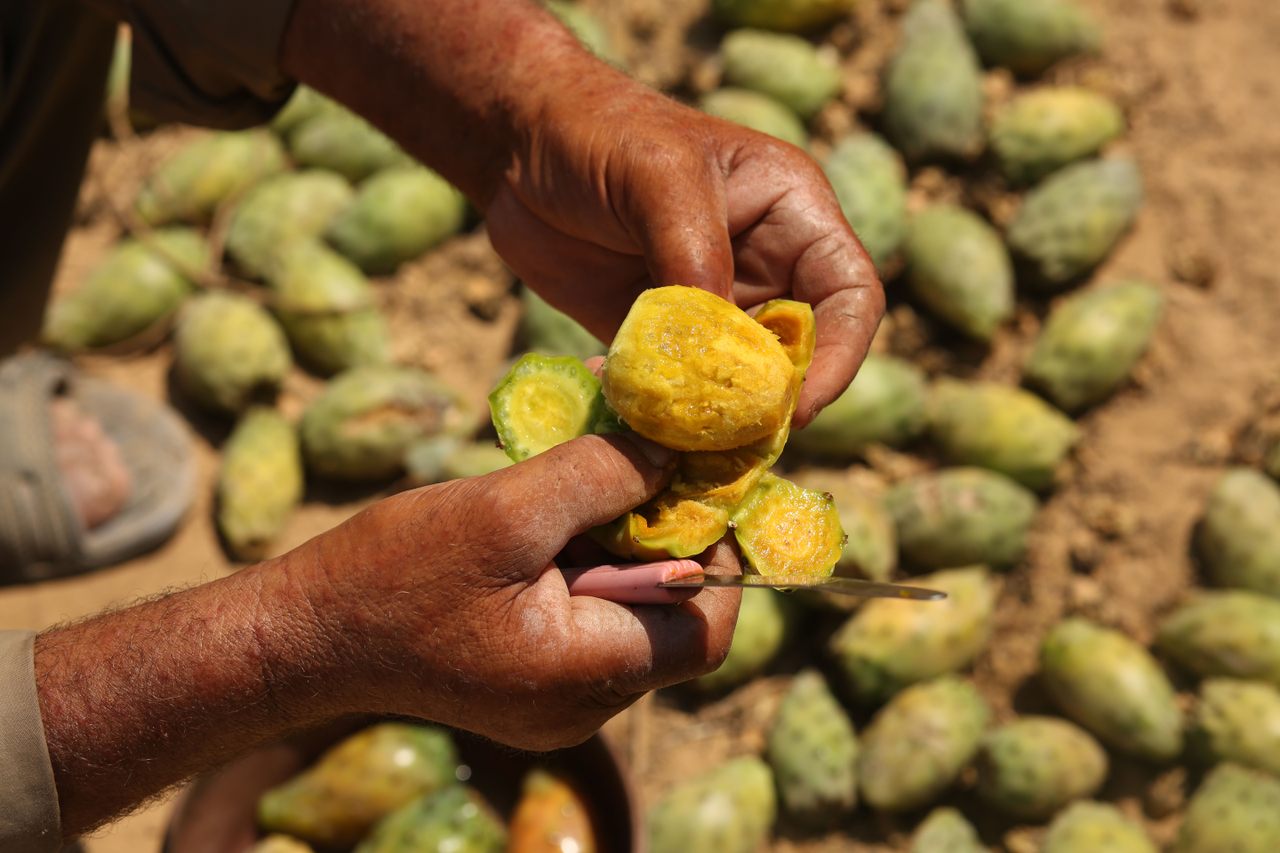 The prickly cactus fruit has intrigued chef Fadi Qattan since childhood. He and his grandmother would sit on her porch in the Palestinian city of Bethlehem peeling off the thick, spiky skin of the seedy yet sweet fruit that she bought by the bucket from nearby villages. Then they’d eat the colorful fruit as it came: juicy and chunky and quick to lose its ovular shape after the first bite or slice of a knife.

At his restaurant, Fadwa Café and Restaurant, in Bethlehem, Qattan incorporates the cactus fruit into his cooking—though it’s a struggle. The fruit “has a very delicate flavor,” says Qattan, so when cooked with other produce, the taste often gets lost. It’s also very acidic, further limiting its culinary utility. Qattan has perfected a cactus fruit jam and dessert based on its juice. But his favorite use is pairing cactus fruit sauce with shrimp from the Jaffa seaport along the Mediterranean Sea.

For Qattan, cooking with cactus fruit isn’t just about eating local—it’s also political. Qattan lives in the Israeli-occupied West Bank, where Palestinians like him need an Israeli-issued permit to travel to Jaffa, a historically Arab city located at least one checkpoint and fewer than 50 miles away in Israel. For him, this cactus fruit dish is a symbol of Palestinian dispossession.

That’s a lot of politics for one fruit, but that’s the prickly cactus fruit’s nature in the region. Like with the Israeli-Palestinian conflict itself, very different stories are told about the cactus fruit depending on whom you ask. Called sabr in Arabic and sabra in Hebrew, the fruit has become a core but disputed symbol of Israeli and Palestinian national identities.

After a century of conflict, the sabr-sabra divide still infuses everyday art and language. Surprisingly, though, its core use in the kitchen hasn’t really changed. People still buy it in the market, now often already peeled or with the thorns removed, ready to eat just as it is.

“It’s not a beautiful fruit,” says Qattan, comparing the texture and qualities to passion fruit. “When you chop it up, it breaks. It’s very fragile. It doesn’t look nice once its peeled and worked with.”

Like many Palestinians, when Qattan sees cactus fruit, he sees remnants of the Palestinian villages that were destroyed or conquered in what is now Israel during the 1948 war for Israel’s independence, called the nakba, or the catastrophe, by Palestinians. (Today there are around five million United Nations-recognized Palestinian refugees, the descendants of those who fled or were expelled from their homes.) For generations, Palestinians had used the hardy plants to form fences around their land. As a result, the only sign of some villages’ one-time existence is lines of cacti.

“If you look at most Palestinian villages demolished in Israel, what’s left is cactus fruit and olive trees,” says Qattan. Since 1948, he adds, this has imbued the cactus plant with a “mythical symbolism.”

About 65 miles and a disputed border away, Israeli Shachar Blum views cactus fruit, which he calls sabra, very differently. Blum owns Orly Cactus Farm in southern Israel, the largest producer of the prickly plant in the Middle East, and he insists it’s the next big, antioxidant-packed super fruit. He’s even developed a powder to use in shakes, along with cactus-based jams and spicy sauces.

Blum’s father built the farm in the 1970s, and Blum describes his obsession with cactus fruit as rooted in Zionist nationalism. Since the early days of Jewish immigration to then-Mandate Palestine, Israelis have called the ideal Israeli, who is born in the country, a sabra: tough on the outside like the thorny fruit, soft on the inside like its sweet flesh, and native to the soil like the plant. (Although like many Israelis, sabra is actually an immigrant, having arrived from the Americas via Spain several centuries ago.)

When Blum’s father started the farm, he knew that many parts of the world have cactus fruit plants, so he wanted to make theirs the best. They chose Dimona, in southern Israel, because of its intense sun and “the Zionist dream of making the desert bloom.” Now the farm is completely organic and uses recycled water from Dimona. In the 1990s, Blum started experimenting with different species to make the fruit bigger with fewer seeds and spines (and less likely to induce constipation, according to Blum). While the farm previously produced only orange fruits, now they grow in six colors, including yellow, purple, and red. Blum has also been able to extend the notoriously short cactus fruit season from just the summer to more like June to October.

Blum doesn’t want to get into politics, though, in Israel, it’s often unavoidable.

“A lot of people in Israel say the Arabs and Jews can’t work together,” he says. “In our farm, we have Bedouin, Jewish, Sudanese, Thai, and Sri Lankan employees … We believe that whoever you are, if you want to work, you can come here.”

As one example, Blum explains that the farm’s manager is from a nearby Arab-Bedouin community. The manager started working at the farm at age 14 (today this would be a violation of Israeli labor law, which stipulates that 14 year olds can only be employed for light summer work) and is “like my father’s third son.”

With his cactus fruit farm blooming, Blum says he’s not focused on the Israeli-Palestinian conflict. “I don’t think I need to think about the past. I think about the future … The problem is with the leaders and not the people. I don’t have much time to do politics. I have too much work.”

Another 120 more miles and part of the disputed border away, Palestinian artist Ahmed Yasin, age 25, has never spoken with an Israeli who is not in military uniform. Yasin lives in a small village outside of Nablus in the occupied West Bank, where the past often appears more stable than the future. But like Blum, Yasin is obsessed with the cactus plant, which he uses as the canvas for his artwork.

Yasin comes from a line of artists, and his parents had him decorate their ornate and colorful family home. The cactus plants in their rocky backyard caught his eye in 2015 when he was looking for a new canvas. Facing limited work opportunities and hemmed in by permits and checkpoints in the West Bank, Yasin found something fruitful at home.

“[The cactus plant] lives in the hardest environmental conditions,” says Yasin. “It lives in the desert. It resists drought. It endures the weather conditions. In the end, the product is the fruit.” In Arabic, sabr also means patience, and Yasin’s words echo a well-known mantra of Palestinian resistance: sabr wa samud, or patience and steadfastness.

Yasin became something of a local celebrity for his handful of haunting cactus-based images, which are all located in his backyard. One shows an old Palestinian woman with a key to her pre-1948 home; another depicts a baby breastfeeding from the cactus through a bullet hole. He describes his work with the sabr as a kind of “cultural resistance,” inspired by other Palestinian artists and writers who’ve turned to cactus imagery.

It’s illegal for Israeli food entrepreneur Naama Eliyahu, 33, to travel into the Palestinian Territories and see Yasin’s artwork. But while she was raised with the sabra narrative in school, she can’t recall the last time she’s seen or tasted the fruit.

“When was the last time I saw sabra anywhere?” Eliyahu rhetorically asks. “I really can’t remember.”

Eliyahu is the founder and CEO of the Tel Aviv World Food Market, a monthly event showcasing different cuisines and chefs in Israel and abroad. The cactus fruit hasn’t made it there. “Not yet,” Eliyahu adds.

Fifty to 60 years ago, Eliyahu says, the cactus fruit symbolized the new, Israeli-born Jew laying down roots. “[But] nowadays, it’s obvious. We’re Israeli. There’s no doubt about it … We don’t use the term and symbol today.”

As Israel has shifted from a more socialist to now capitalist country, people’s relationship with the land has also changed: In Tel Aviv, it’s the technology sector, not farming in communal communities, that’s the ideal.

“It’s a sad story,” Eliyahu says. “No one cares about the farmers today.”

Despite this disconnect, discussion in Israel about the disparate histories of the sabra, and who and what came before it, is still muted amid an increasingly nationalist political climate.

Yassan, meanwhile, had never heard the Israeli narrative around the prickly cactus fruit. Qattan has, but he won’t work with Israeli chefs, as part of his personal boycott of Israel’s ongoing occupation and what he calls “food appropriation.”

“We have to remember that the conflict is about land and occupation, not about faith,” he says.

In the meantime, the cactus plant keeps bearing fruit.

The Latin Typo That Gave Us the Temple of Ridicule

Tons of Delicious Fruit in Los Angeles Is Going Uneaten

A story of immigrant populations, gentrification, and the free loquat bonanza.
deserts

Prickly pear gummies are a taste of the Sonoran Desert.
gardens

How the Tip of Florida Became a Tropical-Fruit Paradise

A family recipe is just one of several touches that make this Hebrew headstone special.
Neve Ilan, Israel

In a small town outside Jerusalem, a roadside diner is devoted to all things Elvis Presley.
Eilat, Israel

Underwater restaurant at the coral reefs of Eilat.
Jerusalem, Israel

After over 100 years out of service this landmark windmill once again turns as a symbol of Jerusalem's self-sufficiency.
Atlanta, Georgia