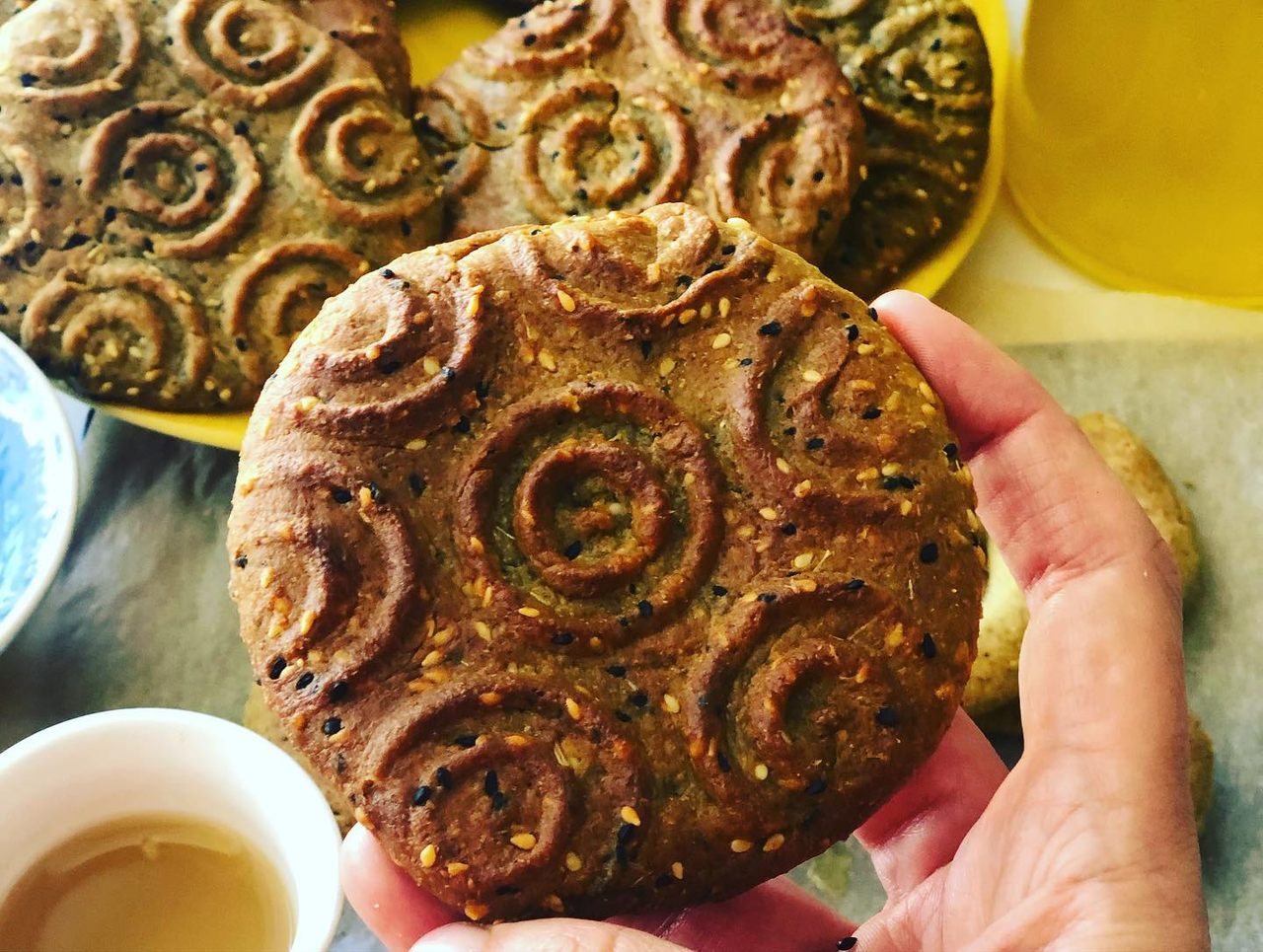 A sweet bread made with whole wheat Jordanian flour by artisan baker Ruba Asi. Courtesy of Ruba Asi
In This Story
Destination Guide

In the bustling capital of Amman, Jordan, teachers, dentists, and entrepreneurs kneel in unused lots behind furniture stores and shopping malls, sowing seeds like their ancestors did. Under the tutelage of farmers from the city’s outskirts, they follow the grain from planting to harvest, eventually walking through lush fields of wheat with sickles in hand. They gather enough wheat to feed their families for an entire year, with enough left over to share with friends, relatives, and neighbors.

These urban farmers are participants in the Al Barakeh Wheat Project, an organization that aims to revive an ancient wheat and baking culture that has been decimated by globalization. From farms in the sweltering Jordan Valley to urban harvests to Amman’s only stone mill, the organization (whose name translates to the “Wheat Blessings Project”) endeavors to reconnect Jordanians to their land—and, in the process, to one another.

The baking tradition that Al Barakeh seeks to revive may be the world’s oldest. In 2018, archaeologists discovered a 14,000-year-old loaf of bread in Jordan, the oldest evidence of bread on the planet by about 5,000 years. That Jordan’s bread tradition may be the world’s oldest should come as no surprise for those familiar with the Fertile Crescent. Jordan’s rich soil and arid climate are so ideal for wheat-growing that the Roman Empire converted much of the region into its breadbasket, followed by the Byzantines, Umayyads, and Ottomans.

As recently as the 1960s, its fields were awash with grain, producing twice as much as people needed. Though a wide variety of wheat grows in the region, the most famous and common varieties all fall into the category of durum, a hard wheat that carries a rich, earthy taste, dense crumb, and high protein content. Durum is ideal for the wide range of flatbreads that long made up a crucial part of the Jordanian diet, from the thick, naan-like taboon to the paper-thin shrak to the more recent pita.

But today, Jordan’s heritage durum has been almost completely replaced by cheap white flour imported from other countries. White pita bread is so ubiquitous that Al Barakeh has to convince professional bakers that it’s possible to use Jordanian durum to bake good bread. Many Jordanians are uncomfortable with the complex, earthy taste of the wheat that was the foundation of local cuisine just a generation or two earlier.

“The white flatbread that is made in commercial bakeries, in my opinion, is a byproduct of colonialism,” says Lama Khatieb, Al Barakeh’s cofounder. Many countries in Europe subsidize their wheat—a soft variety better suited for white flour—before exporting it, thereby lowering its price. Jordan, on the other hand, has been restricted for years by the conditions of loans from the International Monetary Fund and World Bank, and cannot subsidize its growers’ durum. Today, in the face of cheap imports, the former breadbasket now produces only 2 percent of its own wheat.

Residents of the country still rely on bread, but with white flour selling for a third the price of whole wheat, bakers almost exclusively make a white pita that lacks the taste, texture, and nutritional value of the country’s heritage breads. Khatieb hopes that through Al Barakeh, Jordanians can reclaim some of the self-sufficiency they have lost since the 1960s.

By reconnecting Jordanians to the country’s native wheat, Al Barakeh hopes to revive not only rich, hearty bread, but also the communal culture that birthed it. When Khatieb’s grandparents were young, she says that villagers cared for the land together, distributing the wheat harvest equally so those without the physical ability to work still received their share.

Her grandparents’ generation also baked bread at home. But today in Amman, one of the fastest-growing metropolises in the world, bread comes from bakery shelves more than household ovens. In two generations, Jordan’s population has rapidly urbanized, with 92 percent of the once-agricultural nation now living in cities. Amman’s soil, moist and fertile, is perfect for agriculture, but most of its fields have been paved to make way for apartment buildings and shopping malls. Khatieb says that the ubiquity of white bread is part of what she sees as a wider shift toward a Western-facing lifestyle, disconnected from the land.

Khatieb and Rabee Zureikat, Al Barakeh’s cofounder, came to the idea for the project from their work with their other organization, Zikra Initiative for Popular Learning, which seeks to revive aspects of Jordanian heritage, including food. “What brought communities together for thousands of years was the basic staple of food,” Khatieb says. “Once you take this away from them, it all disintegrates.”

Under the guidance of a local farmer, Khatieb and Zureikat reaped their first harvest in a village an hour and a half from Amman during the beginning of the COVID-19 pandemic. At a time when Jordanian police were going door to door distributing white pita bread to prevent hunger, Khatieb and Zureikat felt empowered sharing fresh wheat for their friends and families to bake their own nutritious loaves.

The following growing season, they recruited nearby farmers to teach wheat cultivation to Amman residents on empty plots of land in the city. The community has grown so that this year, 165 families and four schools will pay a subscription fee to learn the art of cultivation from local farmers and buy a share of the urban harvest at the end of the season. As part of the education program, people learn how to bake with whole wheat, as it is often more viscous and tough than white flour. As participants work side-by-side, Khatieb sees the communal ethic of an older style of village life returning: “I need to help you and you need to help me as well. In this way you start to build a community. We’ll have a break together. We will break bread, have a breakfast, exchange numbers. I’ll invite you to my house.”

Al Barakeh’s other arm brings the wheat of rural farmers to outlets in Amman. Zureikat buys wheat from growers throughout the country at higher prices than they would get from the state, otherwise their largest buyer. Today, through Al Barakeh, these growers supply whole wheat flour to nine restaurants, two bakeries, a small hotel, and a retail grocery chain.

Last month, Al Barakeh milled some of this wheat in its own stone mill, located in a space on a sloped Amman street behind a restaurant. Since its inception, the organization’s progress has been limited by Jordan’s paucity of stone mills, which are necessary for producing high-quality whole wheat flour. Before Al Barakeh’s new mill, the only existing ones were outside of Amman and over 100 years old, so grinding grain in them required extra time and care.

Local palates also present a challenge to Al Barakeh, as some Jordanians remain skeptical of whole wheat’s complex taste. Ruba Asi, an artisan baker and teacher who is an old friend of Khatieb and Zureikat, views it as her mission to persuade them otherwise. She describes Al Barakeh’s hard wheat as earthy and mellow with vanilla and maple accents. In her own baking and weekly classes, she folds it into everything from pita to cookies to a stamped flatbread covered with seeds and olive oil.

Despite some Jordanians’ reservations, the nutty, chewy bread made from Al Barakeh’s wheat has caught on quickly: Qabalan bakery, one of the largest family-owned chains in Jordan, made a 100-percent whole wheat pita bread with the project’s flour and sold out of it within the first couple of hours after its introduction, prompting them to ramp up to 2,000 bags a day. A journalist described it as “rich, smooth, with a slightly earthy undertone—fluffy but filling.”

Khatieb hopes that their new mill will bring more Jordanians into the fold. In order to do that, she wants to make it into a community center. When the mill opens to visitors later this year, they will be met with an exhibit on the history of Jordanian wheat and will be able to taste fresh wheat, hot out of the mill. Khatieb also hopes to provide visitors with the skills to use whole wheat with weekend baking workshops in the space.

While Al Barakeh shares this knowledge with younger Jordanians, those who have the most thorough understanding of the country’s wheat are getting on in age. Khatieb worries about Al Barakeh’s farmers; many of them are in their 70s and 80s, and within decades they could all be gone. She hopes to document their knowledge of wheat cultivation and pass as much as possible on to Al Barakeh’s growing community.

Meanwhile, through Al Barakeh’s work, some older Jordanians are able to enjoy traditions they thought they had lost. Ruba Asi’s 76-year-old father had long missed the taste of the bread his mother had baked for him from fresh wheat when he was a child in a village in northern Jordan. His daughter recently baked a whole wheat sourdough flatbread with Al Barakeh’s flour, and gave him a taste. “He liked it,” she says. “He really liked it.”

There's a lot of history in every bite.
science

Farmers and foragers set up at sunset to sell hundreds of species valued in traditional medicine and ritual.
architecture

"Sowing water" in this mountainous region has been crucial for people, crops, and biodiversity for more than a millennium.
Video • Gastro Obscura