How to Spot a 'Short Snorter' - Atlas Obscura
Want to see fewer ads? Become a Member. 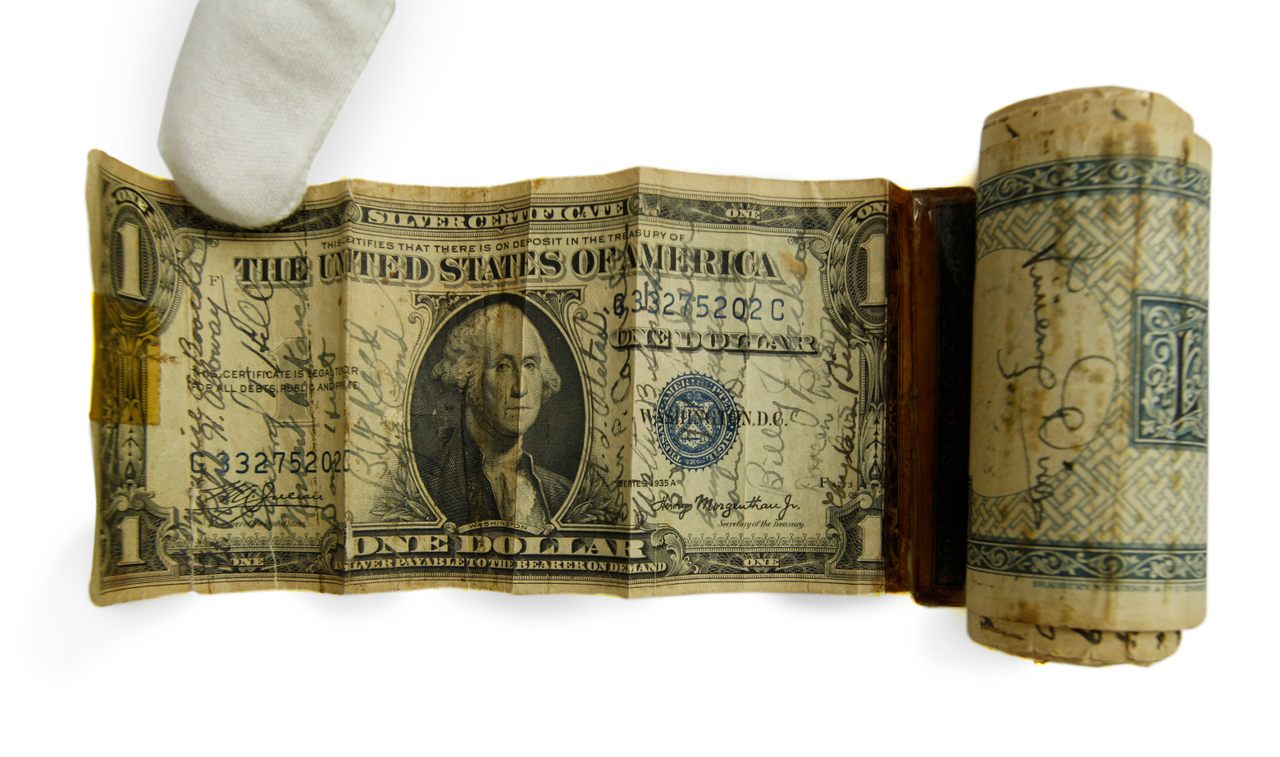 This short snorter belonged to Tom Farrow, a member of the 384th Bomb Squadron taken prisoner in Germany during World War II. These 19 bills are a snapshot of his experience in the war. Courtesy Air Mobility Command Museum
In This Story
Place

Formerly known as National D-Day Museum, this collection commemorates the battles of Normandy and WWII.

At first glance, the dollars look like any others, tinted with age with some bearing the familiar visage of George Washington and others adorned with faces that aren’t easily as identifiable. But upon closer inspection, these bills are covered with signatures and are taped to one another, like an odd and expensive celebratory banner. This is a “short snorter,” part secret society badge and part autograph book.

The short snorter in the Air Mobility Command Museum collection belonged to Tom Farrow, a B-17 crew member of the 384th Bomb Squadron who escaped the burning wreckage of his bomber before being taken as a prisoner of war in Germany during World War II. After being rescued, he retired to Delaware and donated his short snorter to the museum, along with his diary and dog tags. It would have been rolled up for easy transport, only unrolled when a new bill or signature was added from a colleague or famous figure.

“The short snorter itself is 19 bills long,” says Joseph H. Sellars, the museum’s collections manager and exhibit specialist. “The first four [bills] have signatures. The 10-shilling note has a list of his bombing missions and dates.”

The tradition of the short snorter is believed to have started with Alaskan bush pilots in the 1920s, who would leave autographed bills in the small towns they flew into. What is certain is that it was popularized by stunt pilot Jack Ashcraft of the Flying Gates Circus after a show in Syracuse, New York, in 1925.

Ashcraft was sent to find champagne for a party but got distracted by a female companion so the next day, when he was reprimanded for his disappearance, he sidetracked his boss by asking him for two dollars. Ashcraft scrawled “Short Snorter No. 1” one of the bills, initiating the man into a club of sorts (and earning a buck for his troubles). A “snorter” was a shot of liquor; a “short snorter” was a small amount that wouldn’t put the pilots like Ashcraft over the legal limit; and a short snorter bill was evidence that you had a place among the still small number of people who had taken to the skies.

The scheme became especially popular with other pilots, who recruit members into their fold by simply taking their dollar bills and signing one as an initiation. Eventually a whole set of “rules” were developed. But there was one guideline that was more important than all the rest: If you signed a short snorter and the person who owned it didn’t show it when asked, they had to buy you a drink or give you a dollar.

The tradition picked up steam in the military mess halls of World War II as more people made these long-haul flights to Europe, Short snorters became a sort of good luck charm as fellow passengers signed the bills. When you filled one bill, usually a small sum, you taped onto another, including foreign currency picked up in your travels. It became a ledger of where you flew and who you flew with.

Many famous names joined the fun. Winston Churchill was recruited to become a short snorter by future President Dwight D. Eisenhower, who had his own collection of over 90 signatures. First lady Eleanor Roosevelt was also a “member” as was actress Marlene Dietrich, whose short snorter was signed by Ernest Hemingway and General George S. Patton. But not everyone was a fan. Writer John Steinbeck complained that the short snorter club had ballooned out of control, describing it as a “menace” in a dispatch from North Africa to the New York Herald Tribune in 1943. “The original half of the joke has been lost,” he wrote. “Serious and intelligent gentlemen sign one another’s bills with an absolute lack of humor.”

Short snorters told the stories of the servicemen and women, where they traveled, the battles they fought in, and the people they met along the way. How many bills were included in each snorter was also part of the status symbol. For a long time, the longest was believed to be owned by one Captain John L. Gillen, measuring a reported 100 feet, or about 200 bills. But In 1993, a 172.5-foot short snorter came up for auction, breaking Gillen’s record. Dietrich’s short snorter fetched over $5,000 at auction in 2017 while others currently for sale online go for more modest sums, often under $50.

These items have become an important part of museum collections, especially those focusing on World War II, including the Air Mobility Command Museum and the National World War II Museum in New Orleans. The Patton Museum in Fort Knox, Kentucky has one from General Patton, signed by attendees of the Casablanca Conference. The San Diego Air & Space Museum has a bill marked by aviator Charles Lindbergh.

The short snorter tradition seemingly ended after World War II’s devastation and in the years that followed as transatlantic flights became more common and less of a novelty. But signing dollar bills remains a popular way to leave a mark, not just for soldiers crossing an ocean but also civilians on a bar crawl.

Join us for a daily celebration of the world’s most wondrous, unexpected, even strange places.
military history

The tunnels under Okinawa's Shuri Castle should be preserved as a reminder of the costs of war, advocates say.
Video • Object of Intrigue