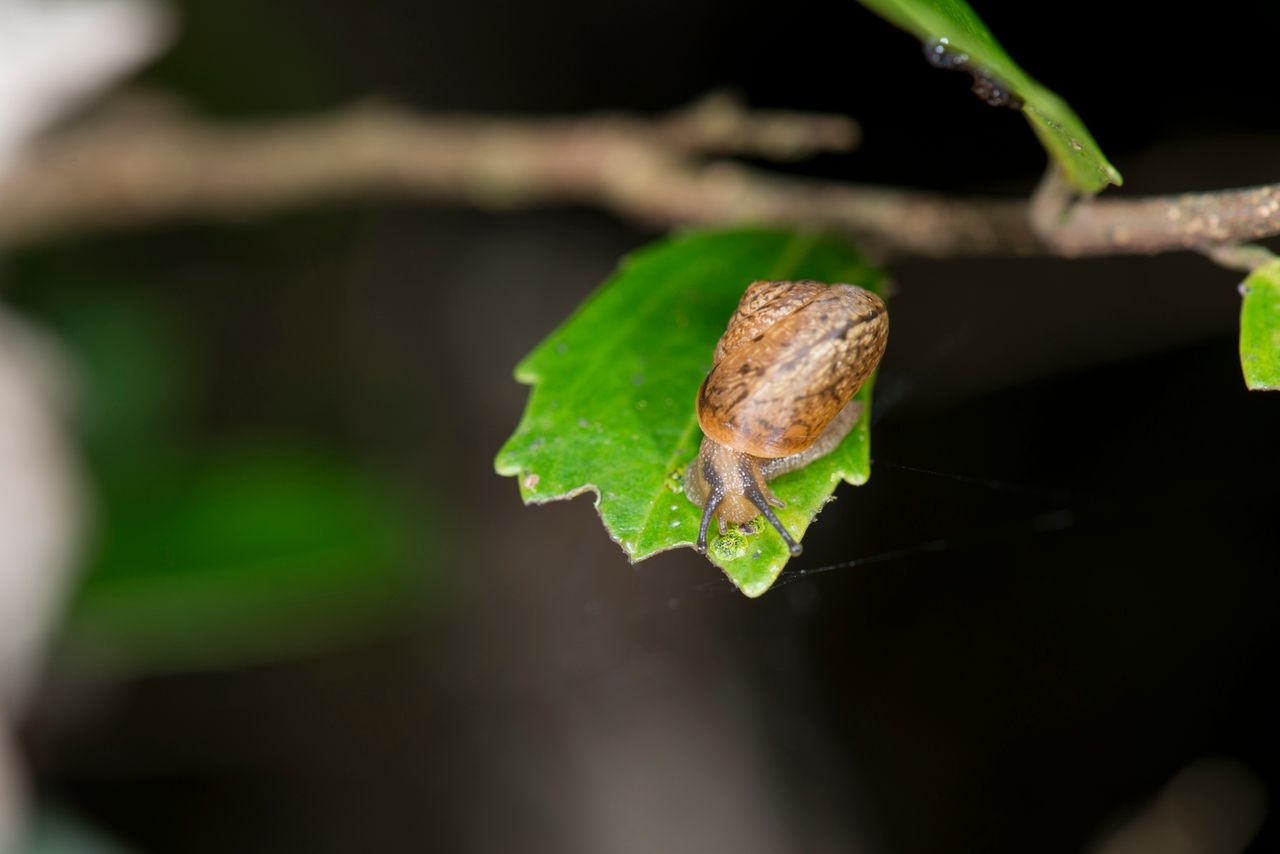 A small snail's new diet has some big implications. LiCheng Shih/CC BY 2.0
In This Story
Destination Guide

Zachary Hajian-Forooshani never expected to find snails in the mountainous, coffee-producing heart of Puerto Rico. In 2016, when he was a University of Michigan masters student, he and his peers noticed some curious excrement on the undersides of coffee plants, which they eventually traced to the invasive Asian tramp snail. “Cool things pop out and you follow up with them,” says Hajian-Forooshani, who has made the snails and their colorful poop the subject of his doctoral research. “I just followed a trail of excrement.”

The oddly colored snail poop was, not coincidentally, the same bright-orange color as coffee rust, a parasitic fungus that’s coming for your morning buzz.

Coffee leaf rust has been a menace for more than a century. After appearing on Sri Lanka in the late 1800s, it enveloped the island within 20 years, ridding what was once the world’s greatest coffee exporter of its cash crop in near entirety. Traveling on the wind across Africa’s coffee belt, coffee rust reached the Atlantic coast by the 1950s. Its arrival in Brazil in 1970 sowed panic in a heavily coffee-reliant economy, and within 12 years, no coffee-producing region in Latin America, where seven-eighths of the world’s joe is produced, was rust-free. Today, 70 percent of Central American farms are infected, costing the region $3.2 billion in damage and lost income.

Much to Hajian-Forooshani’s delight, these tiny mollusks were eating coffee leaf rust without damaging the plant itself. Along with two fellow researchers, he has published a new study that explores the role this invasive land snail may play in the war against coffee leaf rust. Ironically, this gastropod, which has a reputation for feeding on crops and gardens, may be an unexpected hero for coffee farmers and consumers alike.

Historically, attempts to stop the spread of rust have proved short-term solutions at best. “It’s a relatively fast-evolving fungus,” says Hajian-Forooshani. Honduran farmers tried planting rust-resistant hybrid coffee plants several years ago. “It was going to be the coffee leaf that saved us from rust,” he says, “but within a year it started to lose its resistance.” Not even 80-mile “safety zones” and diesel-fuel laced herbicides were enough to contain the spores that—let’s remember—crossed the Atlantic Ocean on wind alone.

The efforts thwarted by the rust make Hajian-Forooshani’s findings all the more shocking. “We didn’t have it anywhere in our minds that such a small snail could be eating rust like this,” he says. His team was stationed in the buggy, verdant mountains of the country’s Utuado region, collecting data on rust, or roya as it’s known locally, from farm to farm. “We noticed this kind of orange squiggle on the undersides of the leaves. Once we realized it was poop, we started finding the snails all over.”

After gathering samples of snails and rust-infected leaves, the team returned to their makeshift laboratory in the basement of their homestay. “We conducted the experiments in pie tins,” says Hajian-Forooshani. “It was no CDC.” The lack of state-of-the-art facilities, however, didn’t keep the team from conducting unprecedented research.

Their newly released paper, titled “Insights From Excrement,” explores the implications of the snails’ unlikely Carribean diet. Despite being one of the most widely distributed invasive land snails, it reads, the species is known to be strictly herbivorous. In Puerto Rico, however, the snails pass on leaves for a larger helping of rust, imparting its poop with the telltale bright-orange tone. The shift is unheard-of, and significant: The study shows that when placed alone with a rust-infected leaf, a single snail can reduce spore coverage by 30 percent in 24 hours. While digestion may not render the spores inviable, Hajian-Forooshani notes that, at the very least, snail poop is far less wind-dispersible than naked spores.

While the snails may be a solution to coffee leaf rust, scientists advise against deploying an army of gastropods across the continent just yet.

Oliver Windram is a Research Fellow at the Imperial College London who studies fungal pathology. He distinguishes between specialists and generalists in the realm of biological controls, the former being, say, parasitic wasps who evolved alongside host caterpillars and cannot reproduce outside of their native ecosystem. “The chances of the wasp finding a new host in another location and becoming a problem are extremely minimal,” says Windram.

Snails, on the other hand, “are terrible generalists—they’ll eat almost anything.” They changed their diet in Puerto Rico, so who knows what economically important crop they could ravage in Colombia, Brazil, or Peru?

“I’d be very worried about moving snails around the world,” says Windram. He advises simple biodiversity. “If you plant non-host trees around an infected area, when the wind blows, the spores are more likely to just land on a non-host plant, germinate, and die.” A quiet ending to a centuries-long, global scourge.

Hajian-Forooshani has similar concerns about scaling the miniscule champion to such a gargantuan threat. As unsure as we are of the snail’s potential benefits, we’re still unsure of the potential danger it may pose. “There’s such a long history of people making a relatively simple observation in the field and saying, ‘This snail can save everything, let’s introduce it into every coffee-producing country in the world,’” says Hajian-Forooshani, “and then it just messes everything up.” Believe it or not, there are worse things than running out of coffee.

Farmers and foragers set up at sunset to sell hundreds of species valued in traditional medicine and ritual.
disasters

The organisms, growing at the Ukrainian site amid invasion and occupation, may one day help keep space travelers safe.
trees

Which trees will live and which ones will die?
More Food & Drink
Ponce, Puerto Rico

Everyone from Alan Ginsberg to The Rolling Stones has stopped by this classic dive bar.
Bayamón, Puerto Rico

The bat-covered home of one of the world's most popular brands of rum is located on a tropical Art Deco campus.
Want to see fewer ads? Become a Member.
From Around the Web
THE GASTRO OBSCURA BOOK
Taste the World!
An eye-opening journey through the history, culture, and places of the culinary world. Order Now