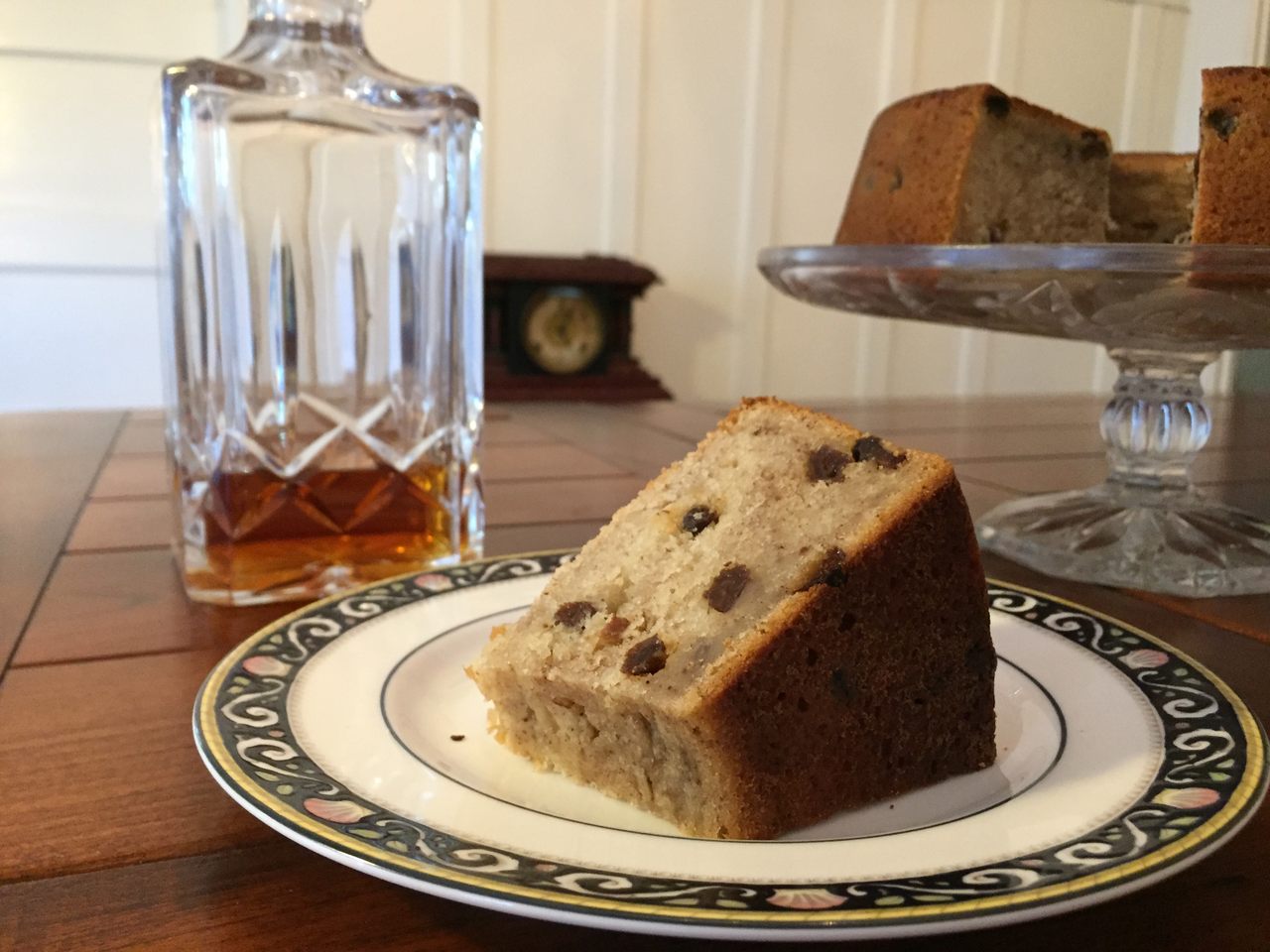 Election cake was meant to be dense, rich, and filling. All photos by Anne Ewbank
In This Story
Food

These massive, booze-filled cakes once made voting sweet.
Destination Guide

While paging through the first known cookbook written in the United States, Amelia Simmons’s 1796 American Cookery, you’ll find quite a few recipes that seem familiar. There’s the pumpkin pie, the roast turkey, and even the “cookey.” But one recipe stands out, both due to its name and its gargantuan proportions: the Election Cake.

American Cookery’s recipe calls for 14 pounds of sugar, 12 pounds of raisins, and oodles of spices, along with both wine and brandy for flavor. These rich ingredients, expensive and rare when the book was published, speak to how Election Day used to be celebrated. Early Americans, flocking to town from their rural homesteads to cast their ballots, treated the occasion like a party, with the alcohol and food to match. Women, who at the time were denied the vote, provided refreshments to voters in the form of a dense, buttery cake, flexing political power in the only way allowed to them.

There are a few elements that defined Election Cakes. Studded with dried fruits and flavored with booze, they evoked fruitcake, as they were based off of the “great cakes” that were once served in England for special occasions. These cakes were usually naturally leavened with yeast that the baker would have made herself—essentially, a sourdough starter. But the texture was definitely more dense and cakey, due to the addition of eggs, sugar, and lots of butter. The only way to bake such gargantuan cakes was in large communal ovens, the only ones that could accommodate their girth.

That’s all according to Maia Surdam, a historian who brought Election Cake back into the limelight during the presidential election in 2016. Surdam, whose research has focused on agriculture, labor, and women’s history, is the co-owner of OWL Bakery in Asheville, North Carolina. Four years ago, she and bakery founder Susannah Gebhart started baking their version of the old-school civic sweet, based on a recipe developed by bread expert Richard Miscovich.

They had been inspired, Surdam explains, by the cake’s history as a woman’s way of participating in the electoral process. Dense and rich, the cake provided fuel for weary voters, many of whom had traveled long distances to cast their ballot. Both the large numbers of people flooding into town and the special food and drink laid out for the occasion turned Election Day into a thrilling holiday.

Surdam also notes that, in 2016, it seemed poignant to revive the cake at a moment when the United States could have very well had its first female president. After all, explains Surdam, the Election Cake was an artifact from a time when women couldn’t vote at all, much less run for office. Nevertheless, “there were these informal channels and through which they influenced the culture around voting and democracy.”

The unexpected popularity of OWL Bakery’s Election Cake made for an exciting, if tiring year for the business. Interviewed by the BBC and All Things Considered, the bakery owners found themselves shipping cakes across the nation to eaters eager to try them, donating part of the profits to the League of Women Voters, while providing a free recipe for curious bakers to try at home. It was an Election Cake frenzy. “We pulled it off,” says Surdam. “But it was really difficult!” Even so, the bakery has since made Election Cake for every local and national election. Surdam sees it as a sort of mission, “in the spirit of promoting democracy, and trying to encourage people to bring back a sense of revelry and excitement around the voting process.”

But in 2020, Surdam found herself facing some doubts on whether to make Election Cake or not. It’s been a fantastically difficult year in the United States on all fronts, with the COVID-19 pandemic, the climate crisis, and a national reckoning on racial justice. She hesitated to celebrate an election that, for many, feels like an extremely serious matter.

While yeast-raised cakes largely disappeared after the advent of artificial leavening, Surdam also notes that election-day rituals may have faded from the American consciousness for an ugly reason. “As more Americans have gained the right to vote, there has also been this decline of sorts of our celebration and our excitement around voting,” she says. “Early on, when the Election Cake was first made, it was during the time when it was mostly propertied white men who could vote.” But things changed, and that change was an affront to many who saw new voters as a threat.

“When we look at the history of women’s suffrage, and we look at the history of Black Americans and other racial minorities trying to get the right to vote, their voting was not met with revelry and excitement,” she says, with women jailed and Black Americans “beaten and killed” for attempting to cast a ballot. “It was a hard fight. And it’s still an ongoing fight,” she says. Such tension doesn’t exactly lend itself to celebration.

Similarly, under the cloud of 2020, it was hard for Surdam to think about making Election Cake. “This is a very stressful election for me, personally, and I think for a lot of people,” she says. However, she recently had a change of heart. “It became clear to me recently, again, that the point of the election is not to honor a specific candidate or to hope for a specific outcome of an election, but to honor the tradition of using food to celebrate democracy,” she says.

“And so,” she concludes, “we will make cake. We made it last weekend. I took it to the tailgate market and had such a great time talking to people about the history. And we raised money for the League of Women Voters and it felt so good. Now, I’m going back to the bakery today to make more.”

Combine the milk and sourdough starter or yeast and mix thoroughly until the starter or yeast is well dispersed in the milk mixture. Add the flour and mix vigorously until the starter is consistent and smooth. Scrape the sides of your bowl and cover it with a damp towel or plastic wrap. Allow your starter to ferment for 8-12 hours at room temperature. When your preferment has bubbles covering the surface, it’s ready to use.

If you plan to use dried fruits in your cake, first soak them overnight or for several hours beforehand. Measure out around a cup and a half of dried fruit (think raisins, chopped dried apricots, or cranberries) and cover with liquor (such as brandy or sherry) or a nonalcoholic liquid of choice (try apple cider, juice, or steeped tea) in a small sauce pot. Warm the pan over a low heat for a few minutes, then remove it from the heat and allow the fruit to soak, covered, overnight or at least for several hours.

Before incorporating the fruit into your cake, strain the liquid off. You can use this liquid to make a simple glaze after the cake is baked.

With a paddle attachment in a stand mixer, cream the butter very well, then add the sugar, mixing until it’s very light and fluffy. Add the eggs one at a time on medium speed. Mix in the sorghum or honey and yogurt.

Divide evenly into a bundt pan or cake rounds that have been buttered and lightly floured. OWL Bakery uses mini bundt pans, which yield 8–10 cakes. Proof for 2-4 hours, until the cake has risen by about ⅓ of its volume.

Bake at 375° F (190° C) for 10 minutes. Reduce the oven temperature to 350° F (177° C) and continue baking for about 25–30 minutes, until a tester comes out clean. Cool completely before cutting and eating. You may enjoy this cake plain or topped with a simple glaze.

Despite James Hemings’s leading role in Jefferson’s kitchen, he’s credited with only a handful of recipes.
politics

For 80 years, wieners have been an essential component of foreign policy.
music

Explore the unexpected and tasty tradition of chinchorreo along the "Pork Highway" of Guavate.
Sponsored by Discover Puerto Rico
Video • Wonder From Home

A 17th-century bezoar, dirt from an infamous site, and other curios decorate this unusual bar.
Asheville, North Carolina

Classy up your Big Mac with bow-tied servers and chandeliers at the world's fanciest McDonald's.
Chewton, Australia

Learn to drink tea like an Estonian at this museum.
Want to see fewer ads? Become a Member.
From Around the Web
THE GASTRO OBSCURA BOOK
Taste the World!
An eye-opening journey through the history, culture, and places of the culinary world. Order Now