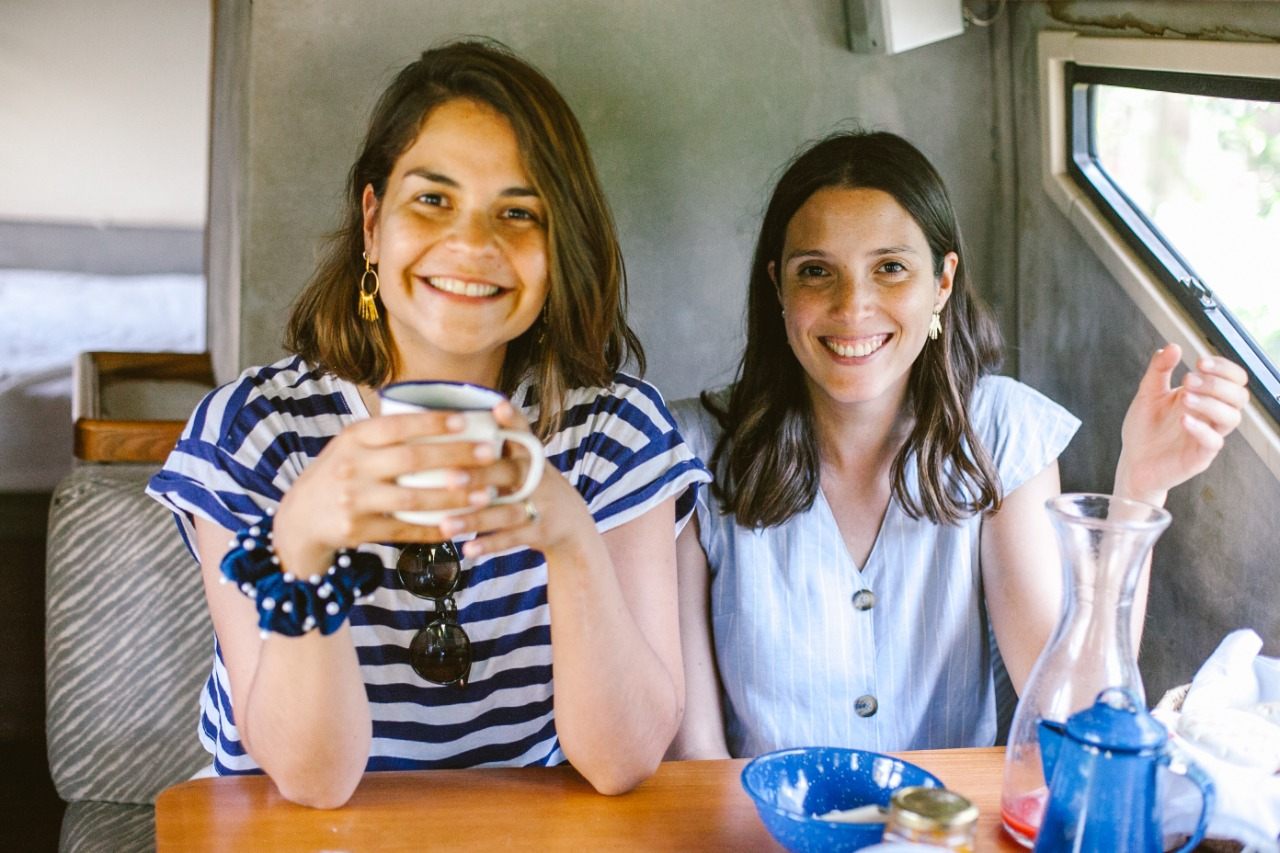 Renata Tesser and Kalu Downey are documenting the tradition. Courtesy of Proyecto Once
In This Story
Destination Guide

You know how you can sometimes view something you love through such a nostalgic lens that you begin to lose track of whether it still exists or may have tiptoed out of fashion? That’s how Kalu Downey felt about la once, or Chilean tea time.

It was 2017, and the Santiago resident wanted to find out if Chileans still gathered around a table each afternoon for their so-called “fourth meal.” Was la once dying off with grandmas, she wondered? Or had it adapted to the elongated workdays and hectic schedules of 21st-century life?

Downey set up an Instagram account with the goal of collecting 100 photos in 100 days that showed what modern tea times looked like. What she discovered was that not only was la once very much alive, but her fellow Chileans were offended she ever thought otherwise. Proyecto Once (Project Once) was born.

Proyecto Once tells stories of modern-day tea time through various platforms, including Instagram and a column in one of the nation’s largest women’s magazines. “It’s really been a beautiful project,” Downey explains, “because it’s allowed co-creator Renata Tesser and I to build a register of both how onces look and what people in Chile eat today.”

Fact and fiction swirl together in the not-so grandmotherly origin stories of la once, yet almost every tale eventually circles back to a common theme: alcohol. Specifically aguardiente, the cheap and generic “firewater” swigged across Latin America.

Brits are believed to have brought their tradition of elevenses, or a short tea break at around 11a.m., to Chilean shores in the 1800s. It was popularized in English-owned saltpeter mines scattered across Chile’s legendarily harsh and rain-starved Atacama Desert. Though it’d be easy to assume that “once” (eleven in Spanish) was a simple translation, the most commonly told origin story is that it was actually coded language for a secret ingredient miners slipped into their teas to get through the work day in such an inhospitable environment: the eleven-lettered aguardiente.

The fad for boozy tea died in the desert in the early 1900s when the Atacama’s boomtowns went bust. However, tea time quickly spread across Chile, morphing into a wholly unique ritual and turning the nation into one of the world’s 15 largest per capita tea consumers. Meanwhile, la once inched ever later in the day to when modern Brits indulge in happy hour (roughly between 5p.m. and 7p.m.).

“Make no mistake: la once is not the English tea time,” says documentarian Maite Alberdi, whose 2014 film La Once follows a group of elderly women who’ve plotted the course of their 60-year friendship through monthly tea gatherings.

“Our version is not nearly as sophisticated,” Alberdi adds. “It’s much more egalitarian, with rich and poor families using mostly the same items.”

Chief among them is bread. Chile is, by leaps and bounds, the largest bread consumer in Latin America. The roll-like marraqueta and biscuit-like hallulla are preferred styles, accompanied by jam, butter, cheese, and scrambled eggs. Avocado is another staple, making la once something of a predecessor to the California-style brunch. “Avocado toast may be super hipster and trendy around the world, but here it’s as normal as bread and butter,” Alberdi says.

When the filmmaker envisions afternoon tea in England, she pictures dainty cucumber sandwiches, fluffy little pastries, and bite-sized scones. “Here, it’s all about abundance,” she says. If it’s a weekend, you can expect a hulking slice of something sweet, such as sponge cake, lemon pie, or milhojas (a gut-busting pastry oozing with dulce de leche, known locally as manjar).

Of course, there are regional differences. In the German-influenced south, forest-dwellers tend to couple their tea with kuchen (cake) sweetened by Patagonian berries. Up north, desert-dwellers pair theirs with empanadas stuffed with candied alcayota (a fibrous gourd). In the fertile Central Valley, you’ll find strips of fried dough with lemon zest and powdered sugar known as calzones rotos (literally “broken panties”). A fisherman on the coast might cap a workday with a fried-fish sandwich, while those in the interior prefer sopaipillas (fried pastries spiced with pumpkin). Age also plays a role in one’s tastes. Downey says she once interviewed a 100-year-old woman for Proyecto Once who put condensed milk in her tea, something she says would merit a vomit emoji from the younger generation.

But no matter where you are, or what your age, onces almost always revolve around family. “Food is a way of showing love and care in Chile,” Downey says. “The aroma of toasting bread is the smell of my childhood. The fragrance of cake in the oven speaks of family to me.”

Onces are often the preferred meal for birthday celebrations, particularly for kids or the elderly. They’ve also evolved in more urban areas into a meal that can replace dinner altogether, in which case it’s called an once-comida. The ritual—and time slot—have become difficult in places such as Santiago, whose nearly 7 million residents have some of the longest workdays in the world.

Yet, onces appear to be making something of a comeback in the age of coronavirus.

“I think today, during the quarantines, people are really starting to get to know their kitchens again,” Downey says. “They’re starting to experiment, try new recipes, watch YouTube tutorials, ask their moms, ask their grandmothers. There is this moment where it is difficult to see anyone beyond your four walls, but you can feel close to your family through la once.”

The vast majority of those who follow Proyecto Once on Instagram are between the ages of 25 and 35. Moreover, according to the most recent National Survey of Food Consumption, which was conducted between 2010 and 2011, 80 percent of Chileans report having onces. Downey says she’s happy her initial assumption was proven wrong. Once may not look the same as it used to, or take place as often or have quite the same rituals, but it isn’t going anywhere.

They're fueling a new approach to traditional cuisine.
gardens

Remember the history, practice, and be creative.
food

All around the world, bakers are making paska in solidarity.
Video

At this desert restaurant, meals are cooked in solar ovens.
Santiago, Chile

How a lunch counter in Chile became a shrine to the 42nd president of the United States
Atlanta, Georgia

No passport is required to eat around the world at this elegant restaurant.
Sponsored by Discover Atlanta
Want to see fewer ads? Become a Member.
From Around the Web
Atlas Obscura Trips
Chile’s Atacama Desert: Geology, Geoglyphs & Ghost Towns
View This Trip
Thanks for sharing!