The Dark Side of the 'Angel’s Share' - Gastro Obscura
Want to see fewer ads? Become a Member. 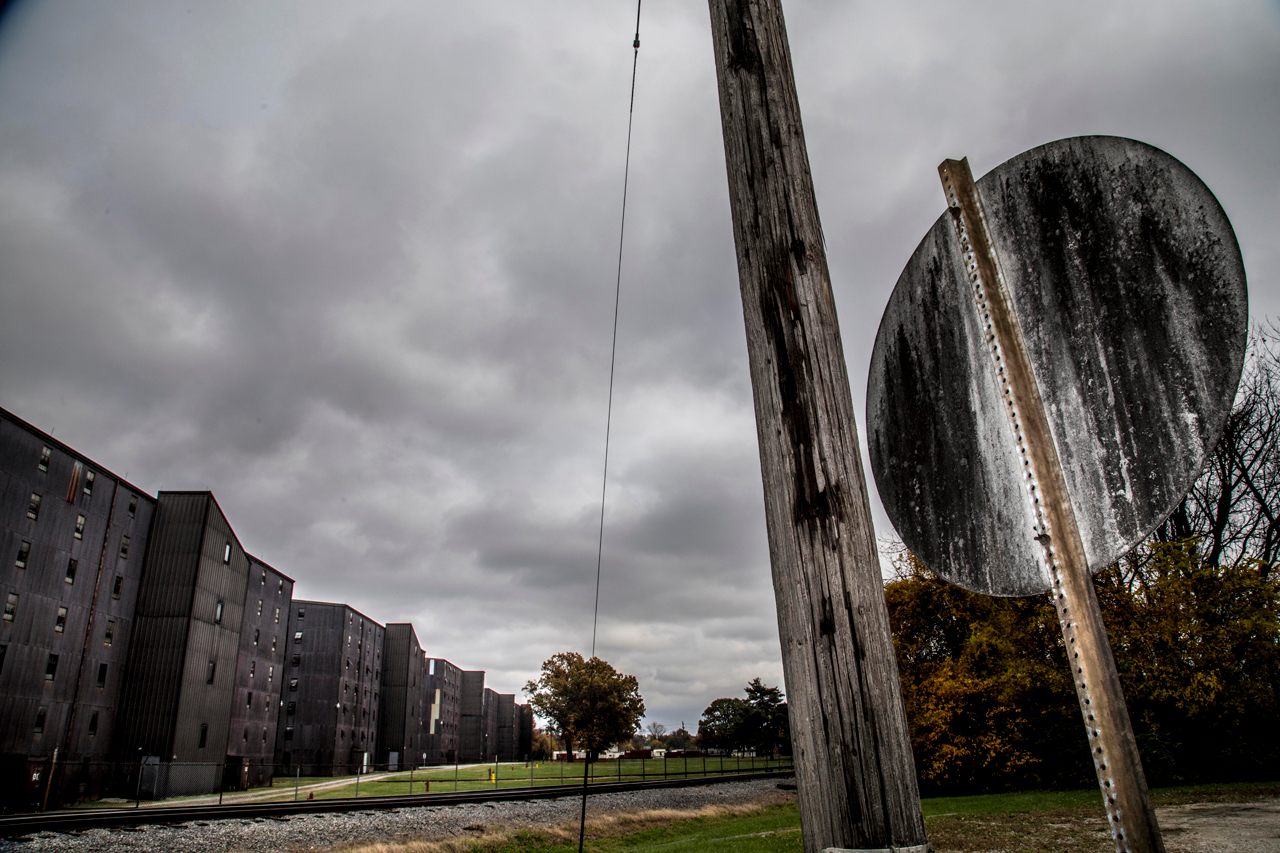 On a gray autumn morning, Kayleigh Count stands outside her home eyeing the mist curling through the trees and lazing around open spaces. For many in Kentucky, the cool dampness signals relief, the end to an unusually hot fall. Not for Count. “It’s a bad time for the stuff,” she says, pointing to the eaves and gutters of her home. They look as if they’ve been shaded in with pencil.

The “stuff” is a fungus: Baudoinia compniacensis. It grows all over her neighborhood—on stop signs, porch furniture, siding, fences, basketball hoops, cars. It’s even been found growing on the dome of the Kentucky state capitol building. From a distance it looks sooty. Up close, a little like thin, black felt. Anything left untouched for years ends up a convincing burnt-to-a-crisp black.

Several communities in Kentucky spent years wondering why the dark film always returns, no matter how deep they clean. Count suspected it was ash from chimney smoke. Others blamed nearby factories. “I had no idea what it was,” says Bruce Merrick, owner of Dant Clayton Corp., a manufacturer of stadium seating and bleachers in Louisville, Kentucky. His business has been in an industrial section of the city for decades, so the gunk on his buildings and bleachers didn’t seem unusual. Only later did he learn that Kentucky’s beloved spirit is quietly fueling the fungus.

Kentucky makes 95 percent of the world’s bourbon. In Frankfort, where Count lives, as well as Louisville, large warehouses hold stacks of bourbon left to expand and contract in charred oak barrels, a process that takes at least a couple of years and results in bourbon’s caramel color and smoky sweetness. During this phase, an estimated two to five percent of the alcohol evaporates. For one distiller alone, that can add up to as much as 200 to 1,000 tons of ethanol emissions every year.

In the bourbon world, the lost ethanol is referred to as “the angel’s share.” The name suggests that ethanol vapors reach the heavens. But research shows that vapors actually filter out, traveling as far as a mile, and fall back down to earth. When that ethanol combines with a hint of moisture (say, morning dew or humidity) Baudoinia compniacensis thrives, earning Baudoinia its nickname: whiskey fungus.

“Ethanol is like a flying sugar as far as [Baudoinia] is concerned,” says Dr. Richard Summerbell, a Canadian mycologist who’s researched Baudoinia extensively. Many fungi use ethanol as a nutrient. But in Baudoinia, which is otherwise a slow-growing, humble mold, the drifting vapors trigger a superpower. “The ethanol turns on a heat-shock protein in the machinery of the Baudoinia cells,” Summerbell explains, making it tough and aggressive. The fungus can survive severe winters, covering buildings surrounding Canadian whiskey distilleries, as well as the tropical sun of St. Croix, home to rum distilleries.

A French scientist named Antonin Baudoin first studied this “plague of soot” in 1872, after noticing it on distilleries in Cognac, France. It was misidentified until 2007, when Canadian mycologist Dr. James Scott re-classified the new fungi through DNA analysis and named it Baudonia, honoring the scientist who first took notice of the mold. In 2011, a lengthy article in Wired magazine detailed the discovery, unmasking the mystery soot as whiskey fungus.

Many people who live near Kentucky’s distilleries say the problem has worsened as bourbon’s popularity has soared. According to the Kentucky Distillers Association, 68 distilleries dot Kentucky, a 250 percent increase in one decade. While many of those are small-batch distilleries, large operations such as Jim Beam and Buffalo Trace have also grown. Last year, Kentucky distillers filled 1.7 million bourbon barrels. Not all those barrels age in Kentucky, but hundreds of thousands do.

Count has had her home professionally power-washed twice in the last five years. Now she does it herself to save money. A bucket of bleach and water at her feet, sponge in gloved hand, the 57-year-old straps a mask over her nose and mouth. (Baudoinia has no known adverse health effects, but public health officials recommend people not inhale spores that come free during washing.) Count stands nearly nose to light-gray siding, cleaning a textbook-sized square repeatedly before moving to the next similarly sized section.

“It’s a tough spore,” she says. “It sticks.” Completely scrubbing her 1200-square-foot home takes three days. “When you come home and the house is dirty and black,” Count says, pausing, “it’s depressing.”

Merrick and Count were among several Kentucky residents involved in class-action lawsuits filed in 2012 against five major companies that operate distilleries in Kentucky, including Brown-Forman, Heaven Hill, and Diageo. All these companies hold locally issued permits that certify compliance with the federal Clean Air Act. Since distillers claim that preventing ethanol emissions would harm their product, administrators of the law don’t regulate the angel’s share. The lawsuits sought to prove that the angel’s share, though, was a giant nuisance, causing property damage and forcing neighbors to spend money on messes not of their making.

William F. McMurry, the attorney who brought the suits, has worked on similar legal action in the Virgin Islands and Scotland. The case in Scotland is “alive and well,” he says, and the judge in St. Croix recently issued an order to test all affected homes for Baudoinia. In Kentucky, the cases stair-stepped up the legal ladder through motions to dismiss and appeals. One case wound up in the Kentucky Supreme Court.

But Kentucky’s $8.6 billion bourbon industry is no scrappy opponent. McMurry says the justices were sluggish to rule, so after five years of litigation (and five years of paying scientists to swab homes and experts to analyze how ethanol carries on winds) he decided to call it quits. “The economic benefit of moving forward was heavily outweighed by the cost,” he says. (The distillers involved in the lawsuits were contacted by email and telephone for this story but did not provide any comment.)

Merrick was disappointed. He had hoped going to court might push distillers to look at ways to remedy the issue, such as the ethanol-capturing equipment used by brandy distilleries in California. “At a minimum we could’ve had a dialogue on how to address it,” he says. “I can deal with this problem as a business owner. I think the biggest travesty is for the people who live here.”

Neighborhoods surrounding Merrick’s business, including parts of Shively, a suburb of Louisville familiar with Baudoinia, have median incomes in the $25,000 to $40,000 range. Power washing a home can cost anywhere from $200 to $500. If the fungus grows too unsightly, Shively’s code enforcement department can impose a $100 fine. Many in the community worry about property values. If they want to sell, who wants a home routinely cloaked in fungus?

Joyce Edwards, a 73-year-old retired factory worker and widow, has lived in her home on the edge of Shively for 50 years. Last year she spent $20,000 on new gray aluminum siding and crisp white awnings. Still, this summer, she climbed an eight-foot ladder with a sponge, brush, and cleaner to erase the crusty mold that had returned. “I can’t get up on the ladder with a power washer. It’s so powerful it will knock me off,” she says.

Despite the nuisance, many who live with whiskey fungus still talk fondly of bourbon, the spotlight it shines on Kentucky, and the thousands of jobs it provides. Edwards’s husband used to work in a distillery. Kayleigh Count’s father, uncle, and aunts did too. Count speaks warmly of using old bourbon barrels as kindling in the fireplace as a kid. “It smelled so good,” she recalls.

Driving through Frankfort that autumn morning, she stops at Buffalo Trace, a historic distillery down the street from her home. She points out a water tower sprouting a black beard and an ashy-colored warehouse. But she’s quick to compliment the “wonderful tour” they offer and their “gorgeous” Christmas light display. “I want them to be my neighbor,” she says. “Just a good neighbor.”

And partnering with a distillery to resurrect one.
shipwrecks

Winning bidder take note: It is not safe to drink.
collections

A preference for blending put the Great White North on the wrong side of industry standards.
More Food & Drink
Louisville, Kentucky

The grave of the iconic Kentucky Fried Chicken mascot features a bust of the man behind the goatee.
Genoa, Nevada