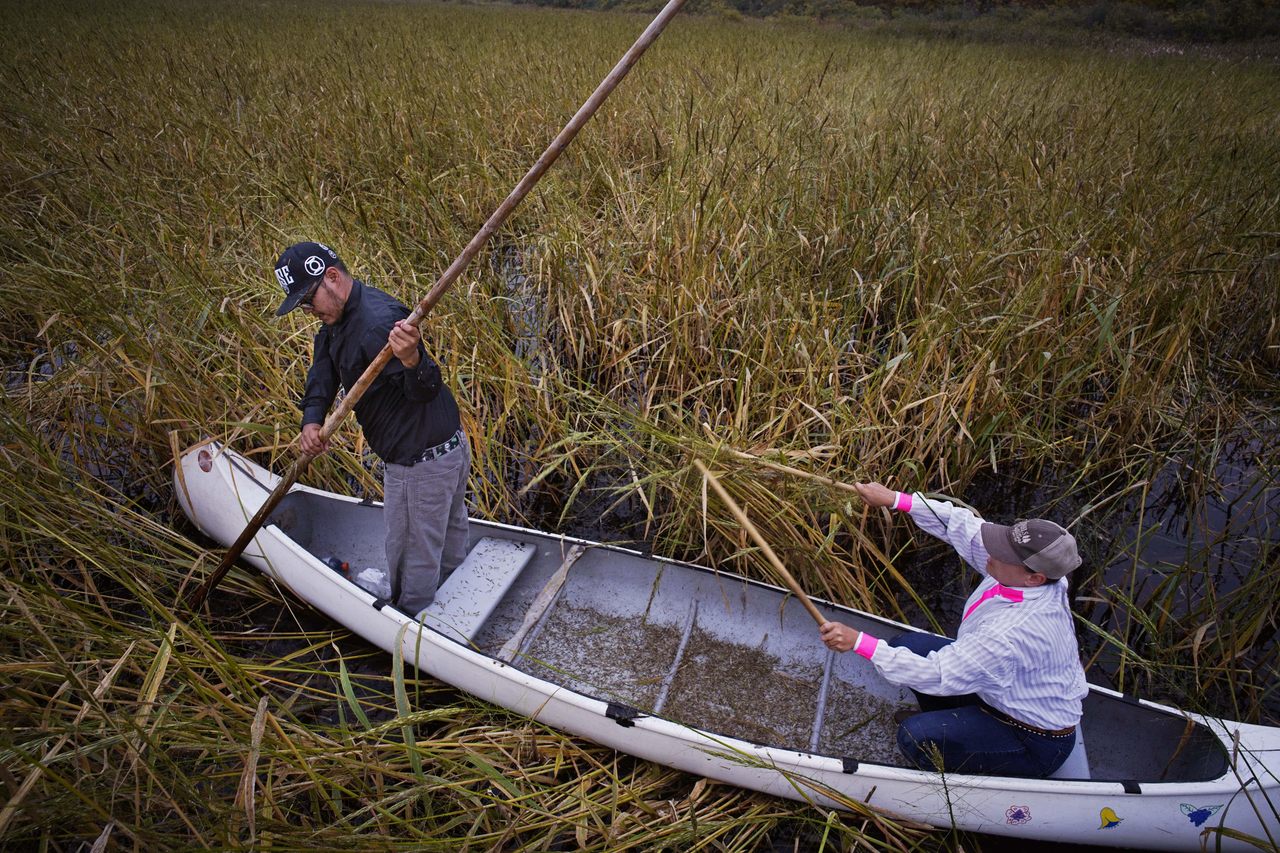 Canoes are the traditional vehicles for gathering wild rice. Richard Tsong-Taatarii/Alamy
In This Story
Destination Guide

James Whetung is willing to go to jail for wild rice. When he was a child, he helped his uncles harvest it in the Kawartha Lakes area, northeast of Toronto. As a Christmas treat, he ate wild rice pudding. His family members were among the last rice gatherers in his Curve Lake First Nations community.

“80 years ago, most of Kawartha Lakes had lots of wild rice in them,” says Whetung. “It used to be the rice bowl of North America.” One rice bed mentioned in Curve Lake oral history measured 17 miles long by a mile wide. “Used to,” Whetung says. “It’s gone now.” He blames the construction of the Trent Severn Canal, built in 1833, for much of that disappearance. Once an important shipping route, the waterway is now a National Historic Site operated by Parks Canada and a popular recreation area.

Today, there’s a tense, decades-old standoff between Whetung and recreational users of the lakes. That’s because he’s been reseeding wild rice in this area for the past 30 years. Boating, fishing, and swimming are difficult where the thick rice beds are flourishing once again. Cottage owners claim their property values are dropping as a result. Whetung has become a lightning rod for anger and frustration. His opponents created a group called “Save Pigeon Lake” to thwart Whetung’s efforts. So dramatic and protracted is this battle that the well-known Canadian author Drew Hayden Taylor, himself from Curve Lake First Nations, wrote a play about it, called Cottagers and Indians.

“I don’t care,” Whetung says after telling me about the opposition to his activities. “I would go to jail for it.”

The revival of wild rice in the Kawarthas began in 1986, when Whetung attended a conference led by Dr. Peter Lee of Lakehead University, a biologist who specializes in wetland ecology. Now retired, Lee says the conference had a dual purpose: to bring wild rice research to the community, and to encourage people to grow it. The conference took place at Minaki Lodge on the Winnipeg River, where 40,000 acres of rice grew as late as the 1970s. “As far as you could see, there was wild rice,” says Lee. Today, he estimates the beds are reduced to less than a quarter of their original size.

That conference and a call to action from other First Nations communities started Whetung down the path of what he calls a “food security uprising.” His yard and home double as Black Duck Wild Rice, the company he named for his father’s clan. Whetung himself is a slim, fit middle-aged man. The sides of his head are shaved, and his black Mohawk-style hair is combed back behind a pair of sunglasses propped on his head. A mischievous smile flits about his mouth as he shows me a furnace oil barrel fitted with a rusty chimney at one end and a wooden barrel at the other. This is his rice roaster. Scattered about the property are earlier generations of wild rice-processing machinery.

Processing wild rice is labor-intensive. Whetung cures and roasts the rice beneath a sugar maple wood fire, giving it a smoky flavor. To separate the chaff or husk from each grain, the rice is placed in a hide or blanket over a hole in the ground so someone can dance on it. To speed up the work, Whetung built what he calls a ‘dancing machine,’ with rubber paddles to remove the chaff. Traditionally, the rice and loosened chaff was tossed in the air using a blanket so the breeze could carry the non-edible chaff away. Whetung’s modern solution is a winnowing machine fashioned from an old furnace blower.

For Whetung, the stakes couldn’t be higher. He calls wild rice the gift of the creator. In the Ojibwe language of the Great Lakes Anishinaabeg peoples, wild rice is manoomin, which translates literally as “good seed” or “spirit food.” The return of manoomin means nothing short of survival, Whetung says. “Our people are so sick. We’ve been suffering pretty bad, confined to this reserve. Wild rice is one way to keep our people healthy.”

Wild rice is rich in protein, fiber, B vitamins, and minerals, making it nutritionally superior to white rice, oats, barley, and wheat. Whetung’s hope is that wild rice will once again become a plentiful source of food for Curve Lake and other First Nations. “A couple days of gathering, a week or two of other work, and a family could have a hundred pounds of rice,” he says.

As in Canada, Barb Barton says that many people who live next to lakes in Michigan consider wild rice a weed. “They don’t want it growing on their lake or around their dock, so they apply for permits to put chemicals in the water that kill it,” she says.

Barton is a member of the State of Michigan’s wild rice working group, an endangered species biologist, and the author of Manoomin: The Story of Wild Rice in Michigan. In 2009, Michigan State University honored Barton with the Extension Diversity Award for her work with Michigan tribes on manoomin.

The first thing to know is that manoomin isn’t a rice at all. Zizania palustris, Zizania aquatic, and Zizania texana (found only in Texas) are grasses native to North America, where they prefer to grow in gently flowing waterways with muddy bottoms. While Zizania grows mostly in the center of the continent, it’s listed as present in over 30 states and all but one of Canada’s 10 provinces. It’s so important to Indigenous people that the word manoomin has contributed to more place names than any other plant in North America.

Barton says that by the early 20th century, the plant was lost from much of its original range. She blames logging, dredging, and the draining of wetlands. “There was even draining because of the malaria epidemic in the mid-1800s,” she says. Mills, railways, farms, and settlements were built on the banks of rivers and lakes where rice beds once flourished.

Manoomin was particularly hard hit by dam construction. One such dam, built in the late 19th century at Lac Vieux Desert—the headwaters of the Wisconsin River—changed the lives of the Lake Superior Chippewa tribe. “By raising the water level, it drowned the rice,” Barton says. “A lot of people used to sell rice, so they lost a big source of income. Many folks moved away from the lake and into town. Manoomin is extremely important to the tribal people.”

Renee Wasson Dillard serves on the Natural Resources Commission of her Little Traverse Bay Band of Odawa Indians in Michigan. She says that manoomin is rooted in their history. “We were once living on the east side of the United States,” she explains. “As we started to migrate, we were following symbols we were told to look for along the way. We would know that we were home once we came to the place where food grows on water. We came to understand that this was rice.”

“Now, it’s a part of our ceremonial feast,” she continues. “You cannot have a ceremonial feast without wild rice.” Until recently, the Little Traverse Bay Band had to purchase their wild rice, but recently band members have been able to harvest their own, thanks to the work of band members and people like Barb Barton. “It’s a very small amount, perhaps half a burlap bag,” says Dillard. “But at least we can do it ceremoniously.” This past year was particularly special, because the community built a birch bark canoe to harvest rice traditionally. She says the canoe helps decolonize the process. “We make our prayers and honor the rice,” she says, “to show it how much we appreciate it.”

Appreciation for the rice goes a long way, given how hard this band and others are working for its preservation. But new threats are lurking. Dillard says Asian carp and a tall invasive grass called Phragmites are taking over rice beds. Barton also notes that climate change has added new stresses. With increased temperatures, there’s a fungus now affecting the plants, and water levels are fluctuating wildly.

But there are hopeful signs too. The White Earth Band of Ojibwe in Minnesota recently adopted the “Rights of Manoomin” law. It’s the first of its kind, securing the rights of wild rice to exist, as well as the clean water and habitat it requires to flourish, both on- and off-reserve.

“It’s unfortunate we have to have a law,” says Barton. “But I think it helps bring the worldview of the tribal peoples to the general public.”

Dr. Lee agrees. “Wild rice provided nourishment for Indigenous people long before first contact with Europeans, and is a very important part of their heritage that needs to be respected.” He says he’s glad that Whetung is bringing back rice awareness in his community. Today, Whetung shares that responsibility with his daughter Daemin, ensuring that the battle to save wild rice in the Kawarthas will carry on.

In Buenos Aires, Queer Tango Takes a Revolutionary Dance Back to Its Roots

Restaurants and pop-ups are putting indigenous culinary traditions in the limelight.
food

This Haudenosaunee restaurant is a delicious tribute to indigenous cuisine.
Colborne, Ontario

This giant roadside fruit is home to an array of apple-based treats.
Toronto, Ontario

In the back of a bustling factory lurks a quiet museum honoring the history of Canadian sugar manufacturing.
Saint Jacobs, Ontario

This quaint museum taps into the sweet history of the maple syrup industry.
Perth, Ontario

A fake block of cheese remembers a feat of dairy engineering from the Chicago World's Fair.
Want to see fewer ads? Become a Member.
From Around the Web
THE GASTRO OBSCURA BOOK
Taste the World!
An eye-opening journey through the history, culture, and places of the culinary world. Order Now