Do Not Eat, Touch, Or Even Inhale the Air Around the Manchineel Tree - Atlas Obscura
Want to see fewer ads? Become a Member. 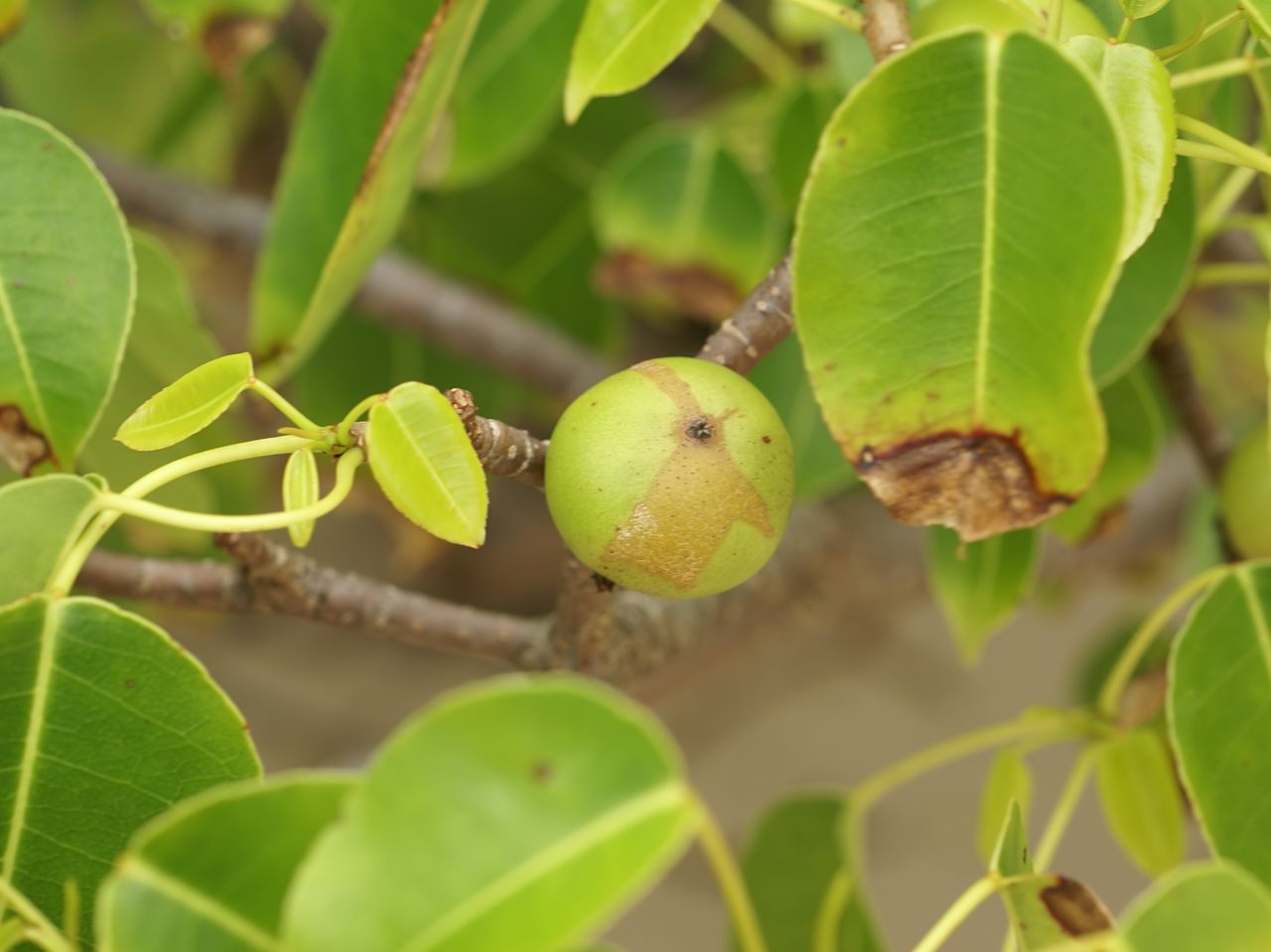 The fruit of the Manchineel tree. (Photo: Hans Hillewaert/CC BY-SA 3.0)

Throughout the coasts of the Caribbean, Central America, the northern edges of South America, and even in south Florida, there can be found a pleasant-looking beachy sort of tree, often laden with small greenish-yellow fruits that look not unlike apples.

You might be tempted to eat the fruit. Do not eat the fruit. You might want to rest your hand on the trunk, or touch a branch. Do not touch the tree trunk or any branches. Do not stand under or even near the tree for any length of time whatsoever. Do not touch your eyes while near the tree. Do not pick up any of the ominously shiny, tropic-green leaves. If you want to slowly but firmly back away from this tree, you would not find any argument from any botanist who has studied it.

After all, it is rumored to have killed the famed explorer, Juan Ponce de Leon.

This is the manchineel, known sometimes as the beach apple, or more accurately in Spanish-speaking countries as la manzanilla de la muerte, which translates to “the little apple of death,” or as arbol de la muerte, “tree of death.”

“Warning: all parts of manchineel are extremely poisonous. The content in this document is strictly informational. Interaction with and ingestion of any part of this tree may be lethal,” write Michael G. Andreu and Melissa H. Friedman of the University of Florida in a brief guide to the tree. This is not an exaggeration. The fruits, though described as sweet and tasty, are extraordinarily toxic. Fatalities are not known in modern literature, though it’s certainly possible that people have died from eating the fruit of the manchineel. “Shipwrecked sailors have been reported to have eaten manchineel fruits and, rather than dying a violent death, they had inflammations and blistering around the mouth. Other people have been diagnosed with severe stomach and intestinal issues,” says Roger Hammer, a naturalist and botanist who has written many books about the flora of Florida.

We do have, thankfully, a description of what it’s like to eat this fruit; Mother Nature Network alerts us to a paper written by radiologist Nicola Strickland, who unwisely chomped down on a manchineel fruit back in 2000 on the Caribbean island of Tobago. A quote from her paper:

I rashly took a bite from this fruit and found it pleasantly sweet. My friend also partook (at my suggestion). Moments later we noticed a strange peppery feeling in our mouths, which gradually progressed to a burning, tearing sensation and tightness of the throat. The symptoms worsened over a couple of hours until we could barely swallow solid food because of the excruciating pain and the feeling of a huge obstructing pharyngeal lump. Sadly, the pain was exacerbated by most alcoholic beverages, although mildly appeased by pina coladas, but more so by milk alone.

Over the next eight hours our oral symptoms slowly began to subside, but our cervical lymph nodes became very tender and easily palpable. Recounting our experience to the locals elicited frank horror and incredulity, such was the fruit’s poisonous reputation.

The sap, white and milky, is spectacularly toxic; it causes burn-like blisters upon any contact with skin, and if you’re unfortunate enough to get it in your eyes, temporary blindness is highly likely. This sap is found throughout the tree, including in the bark and leaves, so, you know, don’t touch any of it.

The specific toxins found in this sap and in the fruits remain partially unknown, but not unused. The aboriginal peoples of the Caribbean were familiar with the tree and used it for many purposes; the sap, in particular, was used to tip arrows. “It is believed that the Calusa used it in that manner to kill Juan Ponce de Leon on his second trip to Florida in 1521,” says Hammer.

Manchineel is a member of a family of plants known as the spurges. (The name comes from “purge,” because, although all these plants have toxic sap, the toxicity varies, and some can be used as a laxative.) Spurges are found worldwide, in various forms, ranging from tiny herb-like plants to large bushes and trees. Manchineel is one of the largest, reaching up to 50 feet in height, but despite its dangerous reputation is not the most famous—that’d be the poinsettia, the manchineel’s more festive cousin.

Juan Ponce de Leon. The arrow that killed him was said to be tipped with sap from the Manchineel tree. (Photo: Public Domain)

The manchineel tends to live along the coast, especially in brackish water. Generally speaking, it likes the same environments as the mangrove, though it’s nowhere near as common. In Florida (and in the US in general), the manchineel is endangered, but tends to occur in clusters. Assuming you want to find one for some reason, it’s most common in the Flamingo section of Everglades National Park, along with some smaller Floridian islands like Elliott Key and Key Largo. “There are other very small populations elsewhere in the Keys,” says Hammer. “It’s quite common around some of the coastal mangrove-buttonwood forests near Flamingo.”

In looking into the manchineel I was most curious about its place in the chaotic ecosystems of south Florida and the Caribbean. What could possibly be the evolutionary reason, I wondered, for a tree to be this toxic? The sap is fairly easy to explain, as a method of deterring herbivores who might otherwise want to harm the tree by eating its leaves or bark. But the fruit, in particular, baffled me: fruits, typically, are designed to trick animals into spreading seeds, since trees can’t spread seeds themselves. The tree wants animals to eat the fruit; the animal, ideally, will eat the fruit and poop out the seeds somewhere else, scattering them with a nice helping of fertilizer (read: poop) to help them grow somewhere new.

The poinsettia is in the same family of plants as the Manchineel. (Photo: Marcus Hsieh/shutterstock.com)

Hammer says that mammals generally find the manchineel fruit completely toxic; its Linnaean (also known as Latin or scientific) name is Hippomane mancinella, which translates to “little apple that makes horses mad,” showing that we’re not the only species to find the fruit problematic. Iguanas appear immune to the toxins, and in parts of Central and South America do indeed eat the fruits and disperse the seeds.

But iguanas are not native to south Florida; the few that are there are, like the Mystery Monkey of Tampa, foreigners who have been dropped into the ecosystem and have found it to their liking. Instead, says Hammer, the Floridian manchineels look not to animals but to the seas for help spreading seeds. “In much of its range its a coastal species so tides and currents are its principal dispersal mechanism,” he says. Fruit drops from the tree into nearby water, and thanks to its buoyancy, is taken by the tides somewhere else. Eventually the fruit rots and the seeds can grow. This isn’t an uncommon method of seed dispersal, also being used by such common plants as the coconut palm.

The spotted water hemlock, or cicuta maculata, is also found in Florida and is far more toxic. (Photo: Public Domain)

The toxicity to humans, though, that’s a mystery. “There really isn’t an evolutionary answer to its being toxic, other than to just say it’s a biological mistake because it certainly doesn’t gain anything by being toxic to humans,” says Hammer. It could be simply a holdover from some past point in its evolutionary history when the tree had to discourage animals from eating it; the fruit doesn’t gain anything, sure, but because its seeds can be dispersed by water, it also doesn’t lose much. (It’s not all bad, though. The wood has been used for non-lethal purposes, and actually prized for some purposes like cabinetry and servingware. To make it usable, it has to be burned at the base to cut it down—nobody has any interest in getting in there with an axe and chopping at a manchineel trunk—and then dried for several days in the sun to neutralize the sap.)

Interestingly, though Hammer confirms the manchineel is the deadliest tree in the country, he says it’s not the deadliest plant. “There are other plants (not trees) in Florida that are far more toxic than manchineel, and one is spotted water hemlock (Cicuta maculata). A quarter-inch of the stem is enough to kill a person,” he says, calling it “probably the most violently poisonous plant on the North American continent.” Of course, it’s also found in Florida—America’s weirdest, most fascinating, and, apparently, most treacherous ecosystem.

There's literally nothing that trees can't do, including get weird with their bodies.
trees

7 Nominees for the Best Tree in Literature

Cast your mind back to childhood and choose a favorite.
Video • PinDrop