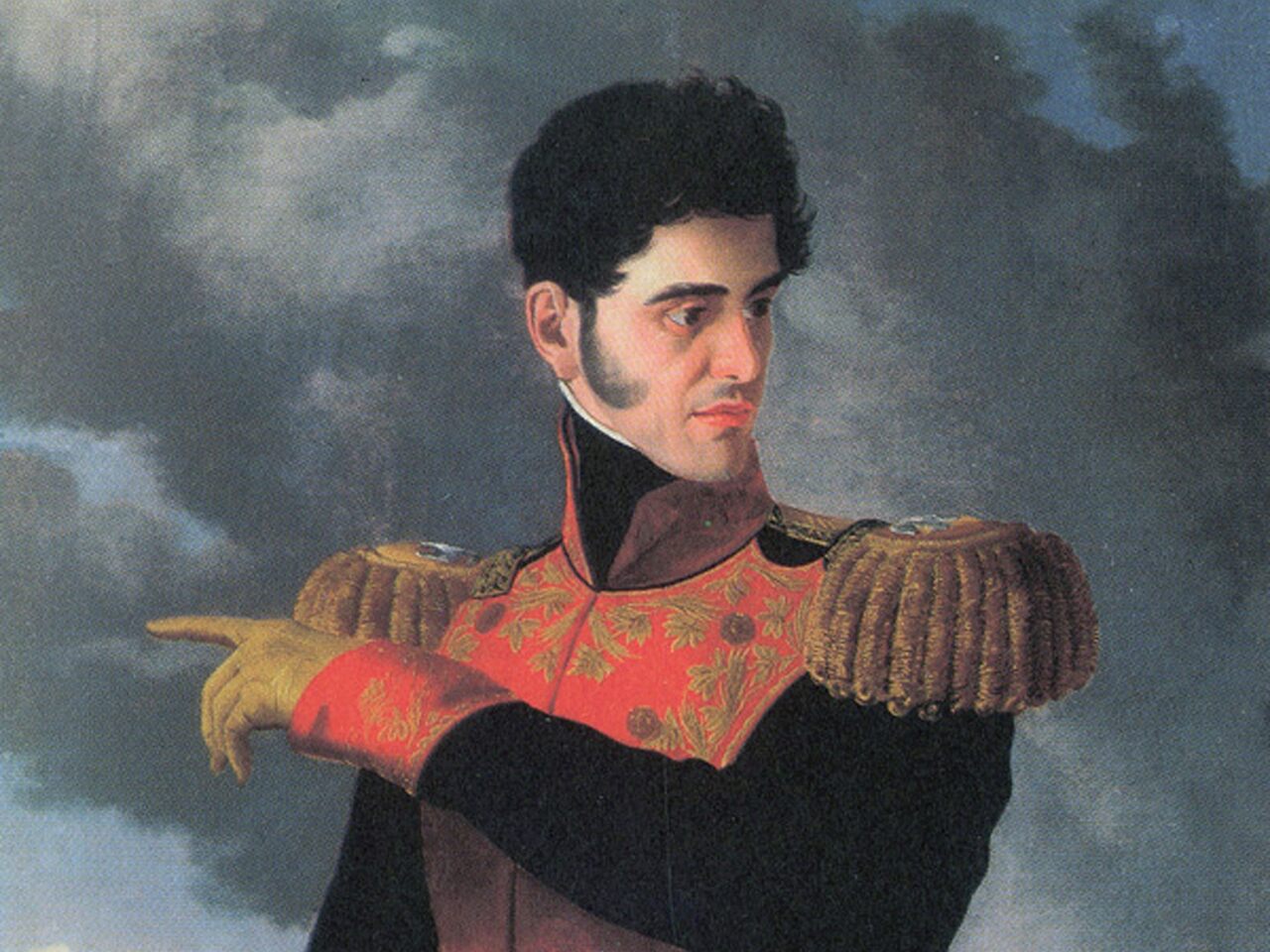 Antonio López de Santa Anna in his days as a dashing soldier, before his unglamorous exile. Universal History Archive/Getty Images
In This Story
Destination Guide

Two years before he died senile and broke, the disgraced Mexican General Antonio López de Santa Anna lived in a modest residence in Staten Island. Known variously as the executioner of hundreds at The Alamo, the man who lost Texas, and “His Most Serene Highness” and “The Eagle,” Santa Anna was missing a leg and had recently been conned out of tens of thousands of pesos. He spent his exile moving among high society, plotting to get rich or return to Mexico, and chewing on something called chicle.

Santa Anna hoped that his supply of chicle, a natural latex harvested from trees in the same fashion as rubber, would make him rich. He’d pitched Thomas Adams, a local inventor, on developing this foreign substance into an inexpensive replacement for rubber. It never worked. But after he left for Mexico for the final time, dumping his chicle on Adams, it became something else: the first modern chewing gum.

Santa Anna was born in 1794 to an aristocratic family in Veracruz, Mexico. A conflicted character from as early as his mid-teens, he fought with the Spanish in Mexico’s struggle for independence but had a change of heart a few years later. Santa Anna ultimately became a Mexican general and helped the rebels overthrow his former colonial comrades. Like many revolution-leading generals, his next act was as a populist dictator, becoming Mexico’s eighth president after years of struggling to consolidate the country’s independence and years of infighting for political power.

To boost his image, Santa Anna pulled propaganda stunts that included staging a state funeral for an amputated leg he’d lost in battle. (His wooden prosthetic was later captured by Americans as a war trophy and allegedly displayed by P. T. Barnum—although that may have been one of the showman’s many hoaxes.) Alongside his military victories, they made him immensely popular. His supporters praised him as “Liberator of Veracruz,” “Hero of Tampico,” and “Founder of the Republic.”

His habit of chewing chicle, though, was unremarkable. After all, chewing the waxy sap of the Yucútan Peninsula’s abundant sapodilla tree was common in Santa Anna’s birthplace. Following ancient Maya tradition, chicleros had harvested the sapodilla tree’s resin under the zig-zag slash of a machete for centuries. Chewy, odorless, and tasteless, it was an ancient form of gum.

Santa Anna was president of Mexico no less than 11 times, flip-flopping on issues when it benefited him. To first gain power, he stood for freedom, but once installed, he told a U.S. ambassador, “A hundred years to come my people will not be fit for liberty … unenlightened as they are.” Increasingly out of touch, Santa Anna began to lose public support.

The fatal blow to his reputation came with the loss of large swaths of territory to Texas and the United States. Still, his grandiose sense of self-importance persisted. Infamously captured at San Jacinto—the battle in which Mexico lost Texas and was considered revenge for Santa Anna’s cruelty at the Alamo—he proudly remarked to his captors “that man may consider himself born to no common destiny who has conquered the Napoleon of the West.”

Forced into exile in the mid 1850s, Santa Anna floated around Cuba, Colombia, and Jamaica. In the Danish West Indies, he met with U.S. Secretary of State William Seward. Misinterpreting this as American support, writes Jennifer P. Mathews in Chicle: The Chewing Gum of the Americas, he was convinced by a Colombian revolutionary that the U.S. intended to back him against the current ruler of Mexico. Blinded by ambition, Santa Anna invested personal funds into the ploy and voyaged to New York City.

Fatefully, he brought his supply of chicle with him.

In New York, he learned that it was a lie. When all was said and done, Santa Anna was caught up in costly litigation, defrauded of tens of thousands of pesos, and forced to lease an unimpressive home on Staten Island, which was then not even within New York City limits.

Living among the Island’s modest agricultural and fishing community, Santa Anna pursued his most far-fetched machination yet: to replace rubber with chicle. Santa Anna’s interpreter had befriended local glass merchant and inventor Thomas Adams, a Civil War photographer who had settled down to raise seven children. Sharing his chicle supply, Santa Anna implored him to develop it into a cheap alternative to the costly rubber used in carriage tires. If it worked, they’d become rich.

Chicle did make Adams rich, but not as a replacement for rubber.

During the late 1850s, Adams and his son Thomas Jr. made many attempts to vulcanize chicle. They yielded nothing, and Santa Anna’s focus drifted. Near the end of his life, penniless, beaten, and sliding down a steep slope of physical decline, he was allowed to return to Mexico City. Two years later, the “Napoleon of the West” died, unaware that his lasting legacy would come from leaving his chicle in Staten Island.

Adams had sunk $30,000 into the rubber project, to no avail. But before he gave up, he noticed a girl buy gum at a drugstore.

In Chicle: The Chewing Gum of the Americas, Mathews explains that at the time, chewing gum was nothing like it is today. Made with a paraffin base, it was brittle after chewing and often contained impurities. In comparison, as Thomas Adams noted in his patent application, chicle gum “contained nothing of an unwholesome character” and it could “be stretched, molded into form, or broken and instantly reunited.”

Inspired, Adams and his sons boiled down some chicle and rolled up a batch of flavorless balls. First put on sale in 1859, they sold so quickly that Adams and his sons went all-in on chicle chewing gum. Together, the family founded Adams Sons and Company and sold “Adams New York Gum - Snapping and Stretching” for a penny a pop. They soon added flavors to their gum, and the company took off.

By the late 1800s, Adams Sons and Co. had turned into a conglomerate called American Chicle Company that employed more than 300 workers at the largest chewing-gum plant in the world, near the Brooklyn Bridge. Chewing gum became so popular that, in an article arguing against Prohibition, Nikola Tesla claimed excessive gum chewing was more dangerous than alcohol abuse.

Eventually chicle was overfarmed, leading to the use of alternatives. While Adams and Santa Anna sought to replace rubber with chicle, in the end it was the other way around, when synthetic polymers (a kind of rubber) developed by a Staten Island chemist in 1909 became the base of choice for gum manufacturers.

The remains of the decommissioned Stapleton naval base are a reminder of Cold War-era nuclear anxiety.
shipwrecks

This slave trade is well known to historians, but this is the first known wreck from it.
maps

How a 16th-Century Spanish Questionnaire Inspired Indigenous Mapmakers of Mexico

It has claws like a mole, eyes that look like poppy seeds, and a great strategy for evading predators and filling up on prey.
Video

In the middle of suburban Staten Island, a nearly 150-year-old bakery is preserving the art of a disappearing New York treat.
Staten Island, New York

Crammed into several rooms of a Staten Island home, this museum is a vodka-soaked paean to the pleasures of drinking.
Staten Island, New York

Nonnas of the World

A smoky doorway in Dakar leads to one of the city’s great communal eating experiences.
Want to see fewer ads? Become a Member.
From Around the Web
Related

Nonnas of the world, unite!
Read more
Thanks for sharing!