Everything We Know About Birds That Glow - Atlas Obscura
Want to see fewer ads? Become a Member. 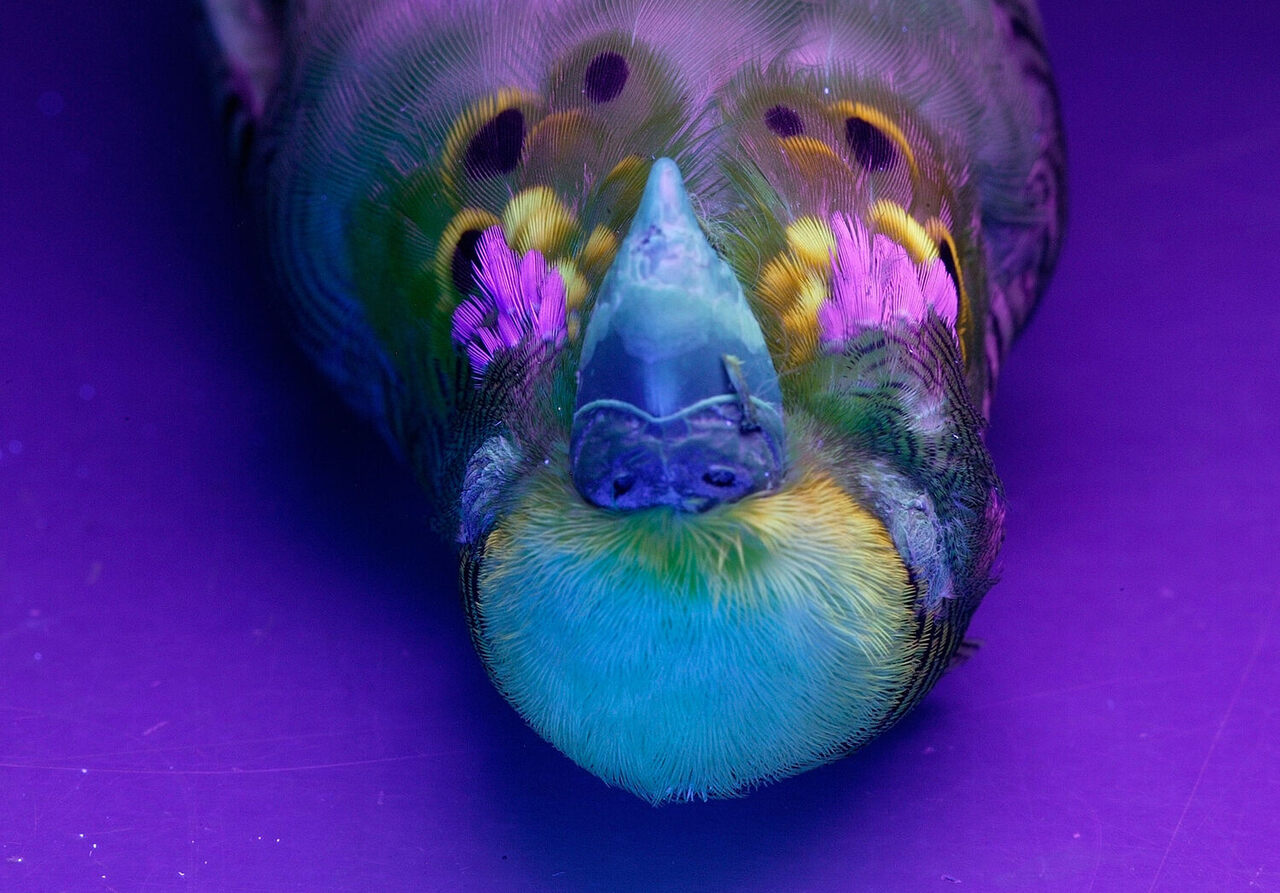 A budgie fluoresces under ultraviolet light. The Natural History Museum/Alamy

Tony Diamond can’t remember exactly why he first shone a blacklight on a puffin. It was around 2010 or 2011, and the ecology professor was helping a graduate student investigate some questions about beak coloration. “For some reason, a colleague had brought a UV light,” he says now. “We thought, ‘Well, why don’t we see what happens.’” So they pointed the light at the bird in question—a preserved specimen—and switched it on.

“We got a big surprise,” Diamond says. Under the blacklight, parts of the bird’s beak glowed brightly, as though it had been striped with fluorescent paint. Earlier this year, when another researcher, Jamie Dunning, posted photos of a similar discovery on Twitter, a CBC reporter compared the puffin’s shiny nose with “a freshly cracked glowstick.” “Puffins are lit,” wrote one fan. “The most scene animals,” agreed another.

Such a glowy nose is certainly impressive. But if you threw a best-dressed contest at an all-bird disco, puffins would have some competition. As it turns out, a lot of avian species—from parrots and penguins to owls and nightjars—glow in ways we can’t see. What’s more, they do so using at least two different methods—and for a whole lot of different reasons, some of which remain mysterious to researchers.

To properly understand bird glowiness, you have to first understand ultraviolet light, and the various ways in which it makes things visible. Because of how the human eye is constructed, we can only see light made up of wavelengths that fall within what we call the “visible spectrum.” This ranges from about 390 nanometers, which appears purple to us, to 700 nanometers, which appears red.

Ultraviolet (or UV) light is shorter than that—it ranges from about 100 to 400 nanometers. We can’t see it, but a fair number of birds can access at least some of this part of the spectrum. Studies have shown that seeing in UV helps birds with all kinds of tasks, from finding food to differentiating their own eggs from those of nest parasites. Some, like grouses, use it to more effectively forage for bilberries, which start reflecting UV light when they’re ripe. Others, like kestrels, may use it to track voles, which apparently mark their paths with bright yellow trails of UV-saturated urine (although this finding has been subjected to recent scrutiny).*

This brings us to the first type of secret bird brightness: UV reflection. “There are probably thousands of species of birds that have UV reflective patches on their plumage,” explains naturalist Scott Weidensaul. These include starlings, many tropical songbirds, and a whole lot of types of parrot. It’s difficult for us to imagine exactly what this looks like to the birds—because we can’t see in UV, the sensory experience is inaccessible to us—but researchers with spectrometers have determined that these patches play a huge role in bird society.

A male and female parrot that look identical to us, for example, might have UV patterns that make them look vastly different to each other. This influences mate selection—female blue tits, for example, prefer males with crests shined up with UV. And such signalling remains helpful even after the babies are made: many chicks have ultraviolet markings around their beaks, so that their parents know where to put the worms.

This, however, is not what’s happening with the puffins. They are displaying a different type of glowy phenomenon: fluorescence. There are certain substances that, when exposed to UV light, absorb it rather than reflecting it. They then emit visible light in response, often in a surprising color. When you shine a blacklight at something and it suddenly pops, that’s because it contains materials of this kind.

Fluorescence, too, is not uncommon in the bird world. King and emperor penguins have glowing beaks, says Diamond, as do at least a few other species. (This article features a UV-illuminated crested auklet, its nose a vibrant orange.) Many parrots have fluorescent plumage, which, when combined with their UV-reflective patches, add even more pep to their mating displays.

Most owl species have fluorescent wings, a quirk that was also discovered accidentally, by a rat researcher named Bruce Colvin in the early 1980s. Colvin—who had fed rats a fluorescent material as part of an unrelated experiment—was shining a blacklight on owl pellets looking for glowing rodent bones when he noticed that the owls glowed, too.

“He quickly figured out that the fluorescence in the wing feathers correlates with the age of the feathers,” says Weidensaul (who, with Colvin and a few others, later published an article about the technique). New feathers glow brightly, while older ones have lost some of their pigments, and so appear darker or duller under the blacklight.

Now most researchers who band and track owls take a moment to check their age under a blacklight. “It’s a combination of serious ornithology and a cheap party trick,” he adds. “You turn off the lights, you turn on the blacklight, you show the owl’s wing, and it’s glowing this raspberry pink.” (Other owls, he he adds, shine a deep blue or lavender instead, and snowy owls, lacking the correct pigment, don’t glow at all.)

We may be able to see fluorescence under blacklights, and marshal it for our own research purposes. But in most cases, we’re not quite sure what the birds themselves use it for. Unlike, say, parrots, owls probably can’t even tell that their feathers are glowing—the moon doesn’t emit enough UV light to kick off the fluorescent effect.

The puffin beaks present a similar mystery, one that researchers have just begun trying to solve. “They will see this differently than we do,” says Diamond. “But we don’t know how they see it, because we’re not puffins.” No matter how hard we try to imitate them at Burning Man.

*Update: We’ve added a mention of a study that asks important questions about vole urine.

The Upside of Freaking Out About Insects on Twitter

When people post about bugs and birds, ecologists can gain some solid data.
science

In Search of Rare Birds and Glory in Colombia