The Unexpected Elegance of Irrigation Systems From Above - Gastro Obscura
Want to see fewer ads? Become a Member. 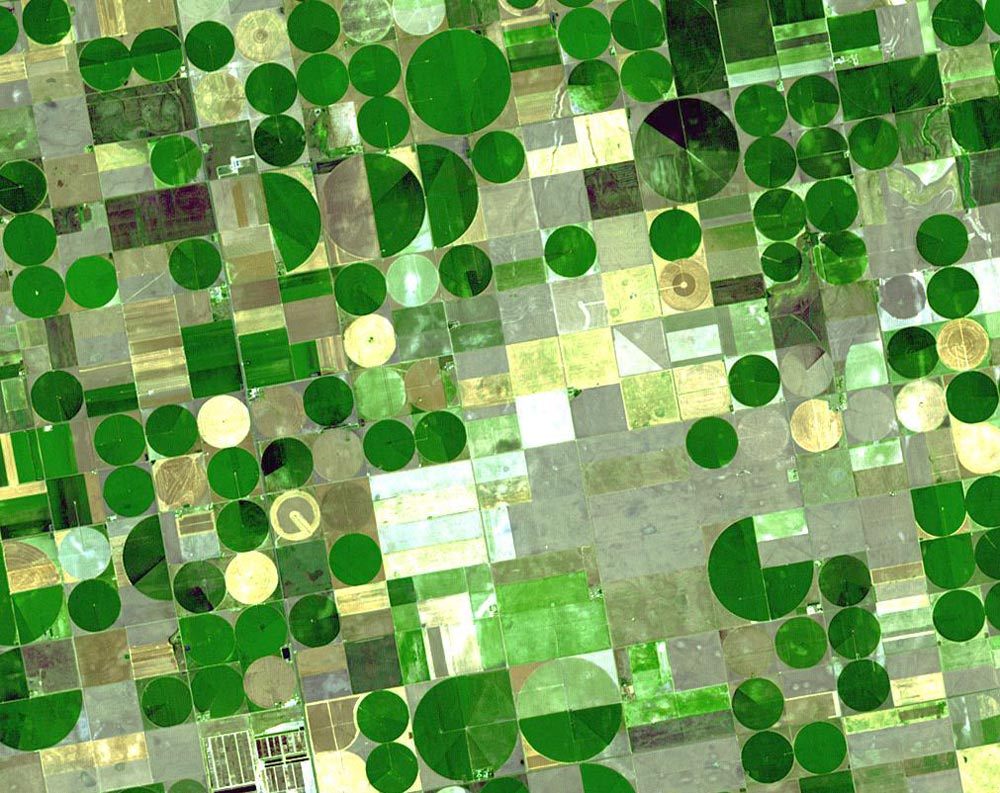 Center-pivot irrigation was not invented to look pretty. The technology was developed, by a Nebraskan farmer in 1948, as an alternative to the groundwater-irrigation methods that failed to sustain many American farms through the Dust Bowl of the 1930s. These new, elevated pipes radiated out from the centers of fields as far as 133 acres, making it unnecessary to lay and later remove pipes from the ground.

Useful as this new technology proved to be, it also provided an ancillary aesthetic benefit: It has created distinct circles within squares that, when seen from above, look like they belong on the walls of the MoMA. (The circles are the result of the pipes’ inability to reach the outermost acres of the fields; as they spin, they miss the edges and corners.) The architect Ronald Rael, a professor at the University of California, Berkeley, recently launched an Instagram account spotlighting these irrigated circles. Simply called Center Pivot Sprinkler, the account’s images span both the globe and the color wheel, often recalling the painter Piet Mondrian, had he worked with circles rather than squares.

Growing up in Colorado, Rael says he was “pretty much surrounded by center-pivot sprinklers,” so much so that he could pull over on the side of the road and expect a free car wash. He recalls seeing them from above during his first flight, as a teenager, and being struck by what they looked like when he was no longer standing next to them. When a friend recently launched an Instagram account documenting everyday life in Juárez, Mexico, Rael returned to his longtime interest in the sprinklers and decided these images were worth sharing.

Among his favorites of the 90 he’s posted (as of press time), Rael counts fields in Settat, Morocco, that appear to be lined by grids—as if the pivot system was abandoned and left behind as a “scar,” after a more traditional irrigation system was reinstated. He also highlights fields in Jubail, Saudi Arabia, that stand out for the “stark contrast between the desert and the life.” In other words, those that he finds “most interesting are where there’s intersections between more than one system,” be those systems of irrigation or qualities of the landscape.

While these farmers may not think of themselves as artists per se, Rael believes that “farmers inherently understand the beauty of their work … They’re generating life” after all, and “there’s inherently beauty in that.” These pivot systems, in their own way, showcase the diversity of life on earth: They range from “impressionistic” and “surreal” to “modern” and “technological,” as Rael sees them. Ultimately, that’s what he loves the most about these pivot systems. “I fly around” on Google Maps and Apple Maps, he says, not knowing when he’ll land on the next field he’ll feature. All he knows is that when he lands on it, it will be unlike the others. It’s more than a substitute for travel in times of quarantine; it’s a reminder that many of the things we’re most familiar with are more than what they seem, that our eyes can only see so much of what something really looks like.

A post shared by Center Pivot Sprinkler (@centerpivotsprinkler) on Aug 8, 2020 at 8:28pm PDT

From biscuits to cherry pie, these award-winning dishes tell family stories dating back to the 1800s.
food