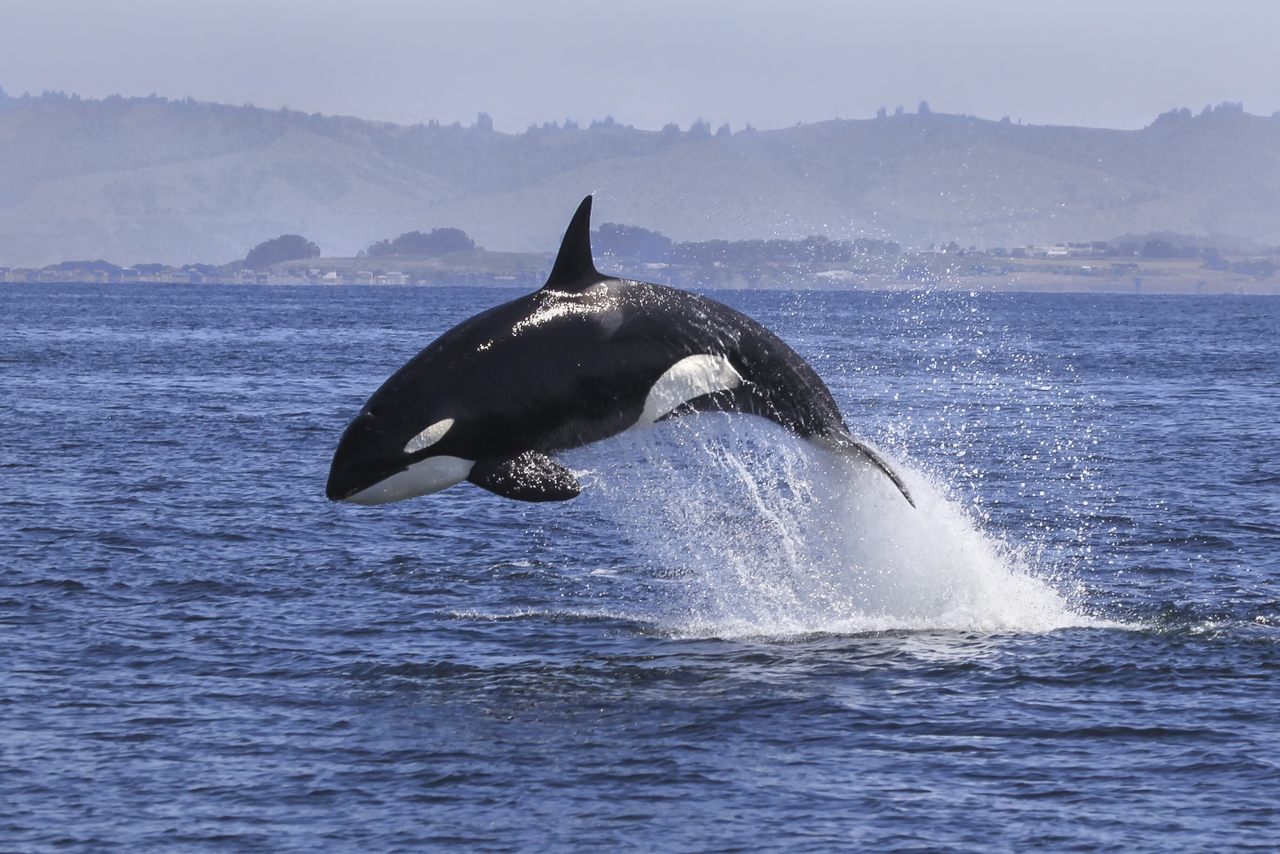 A new study suggests that when orcas and other whales swim to warm waters, they're taking a spa vacation—sloughing their skin and shedding the algae they accumulate in cold water. Tory Kallman / Shutterstock
In This Story
Destination Guide

Marine biologists have long debated what drives whales to undertake the longest migrations of any mammal on earth. The answer, it turns out, may be as simple as skin care.

That’s the conclusion of a new paper in Marine Mammal Science by Robert Pitman, of the Marine Mammal Institute at Oregon State University, and colleagues. Adding to work that the team reported in 2012, the new data comes from 62 satellite-tagged killer whales, which make six- to eight-week winter migrations from Antarctica to the edge of the tropics and back.

Analyses of the whales’ behavior strongly suggests that sloughing the skin—and thereby letting loose a heavy film of microorganisms that congregate on whales in cold water—is what drives the mammals’ movements. It’s the whale’s version of a spa vacation (complete with a good all-over scrubbing) in the tropics.

All mammals and birds shed (and replace) their skin or feathers regularly—a process called molting. (We humans actually lose our entire outer layer, flake by flake, every two to four weeks; for each of us that adds up to about a pound of keratin per year.) Whales are no exception. And they carry a lot of extra stuff as well, especially diatoms—a form of algae—that attach to their skin with sucker-like valves.

Whalers in the early 1900s were aware of this phenomenon: They referred to whales with infested bellies as “Sulphur bottoms.”

Meanwhile, many whale species travel thousands of miles in winter toward the tropical waters of the equator, then back to food-rich cold seas to feed in summer. (Gray whales are the superstars of this epic migration, swimming more than 12,000 miles between breeding grounds off Baja California, and feeding grounds in the Bering and Chukchi seas off Alaska and Russia, respectively.)

Theories as to why abound. One is that calves do better—that is, grow larger and are more likely to survive—when they’re born in warm waters. Another posits that adults are able to feed and save energy (despite the long trip) by wintering in warm waters when polar areas are especially cold and light on prey. A third idea is that whales—especially baleen whales—escape predatory killer whales hungry for calves by moving to lower latitudes, where these animals are less common.

These explanations may apply in some cases. But the story of Antarctic killer whales suggests a different prime mover.

The orcas make their long-distance round-trip migrations of nearly 6,000 miles at high speed (five to 12 miles per hour), sometimes more than once a year, without major food stops, and with abrupt turnabouts to head back to Antarctica. Rather than taking months to travel, as some whales do, they zoom back and forth in just weeks. There’s little time on these journeys to feed or give birth—and, anyway, a new calf would be hard pressed to keep up with the adults on such a speedy return to Antarctica.

Scientists believe that orcas can and do give birth in cold water. And if calving were the reason to head north, it’s unlikely that males and non-breeders would take part in the migrations.

What whales of all species can’t do in icy seas is slough their skin—which needs to occur regularly to allow for wounds to heal and new epidermal growth. “We’ve seen killer whales so heavily coated it looks like fouling on a ship’s hull,” Pitman says, noting that this could affect swim performance (though it may also be somewhat insulating in cold waters).

To shed the funky stuff, he explains, blood must be flowing to the skin. But when the whales are feeding in Antarctica, “they could retain body heat by not shunting blood to the surface,” which would impede the molting process.

Returning from their trip to the tropics, however, the whales are squeaky clean—having shed the diatoms plus any parasites or harmful bacteria that have glommed on. (The whales’ speedy swimming may help loosen the old skin.) Molting may not be the sole reason they migrate, Pitman says, “but we think it is the main driver.”

“It’s a novel and exciting idea,” says conservation biologist Joe Roman of the University of Vermont, who was not involved in the study. “And it leads us to think about these movements in a new way.”

Before commercial whaling drastically reduced their numbers, millions of large whales used to move annually many thousands of miles—what Roman calls “a great whale conveyor belt of energy.” Even in smaller numbers today, “these animals bring all that biomass, releasing nutrients—carbon and nitrogen—from urine, carcasses, and placentas as they travel.”

Other organisms, from algae to sharks, benefit from those nutrients. “And now this work says, ‘Hey, there’s also all this sloughing going on, maybe even driving the movement.’”

No one has ever tried to quantify the sloughed-off skin, he says. “But as a pathway of movement for these diatoms and other microbes, it could be very meaningful ecologically.”

Pitman next intends to do the math and figure out the shed material’s ecological significance, including how much of a resource it is for other species. In tropical waters, “we’ve seen the surface just littered with skin, with gulls flying in to feed and fish coming up from below,” he says. “It definitely has an ecological impact.”

Speaking of impact, there’s a related whale-behavior question that this work may have resolved: Why do marine mammals breach—exploding out of the sea and landing with a giant smack against the surface?

They sure seem to be letting loose. And if the skin-care theory applies, that’s exactly what they have in mind.

Correction 3/04: This article previously identified a breeding ground for gray whales as being off Baja, California. It is off Baja California.

The Incarcerated Inuit Artists Who Carve to Support Their Families

Scientists observing a pod in the wild think the animals may choose specific species for a skin care wellness routine.
animals

A massive human-assisted migration lands the imperiled animals back in warmer seas.
science

Lauded for her research on gentle giants of the sea, Andrea Marshall is using her fame to find hope for our troubled oceans.
Video • AO Docs

3:38
Want to see fewer ads? Become a Member.
From Around the Web
Atlas Obscura Trips
Swim with the Singing Whales of Tonga
View This Trip
Thanks for sharing!