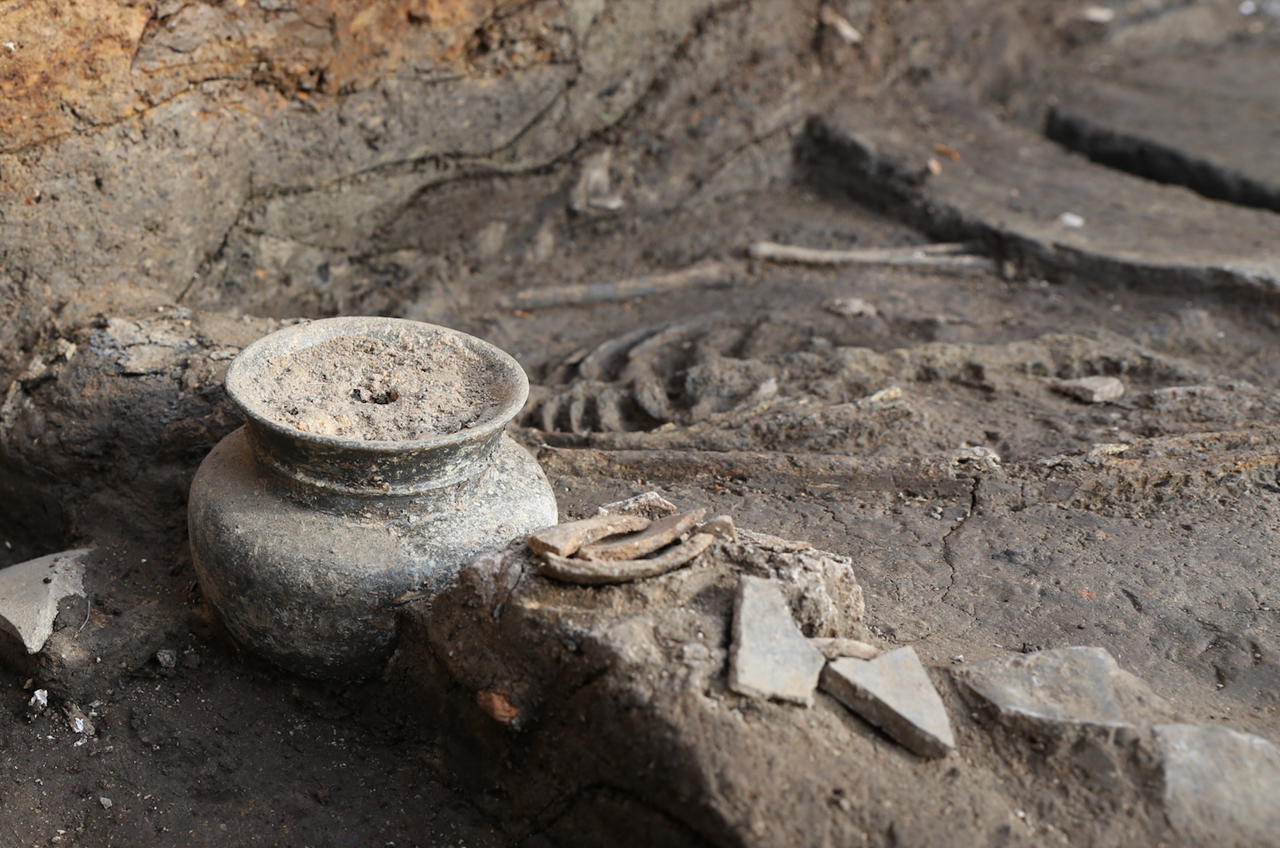 More than 1,600 years ago, close to the southeastern coast of the Korean Peninsula, laborers were hard at work building a palace for a fledgling kingdom. They finished the foundation layer of the massive western rampart and then paused before beginning the next construction phase, a stone wall. The foundation, made from packed shells and earth, was complete from an engineering standpoint. But the ancient builders believed something more was needed to protect the structure: human sacrifices.

The victims sealed in the rampart included a peasant couple in their 50s, who were laid side-by-side to safeguard the castle against future invaders or structural collapse. Their bones were uncovered in 2017 by archaeologists excavating at Wolseong, the palace of the first dynasty to unify the Korean peninsula. The researchers had reason to suspect the deaths were no accident: Though the couple’s bones provided the first physical evidence, there had long been rumors of sacrifices. Now, ongoing investigations have yielded a grisly new find, as well as clues to who the victims may have been. Still to be uncovered: How many more bodies may be hidden in the rampart, waiting to be found.

Kim Heonseok, an archaeologist who was part of the 2017 team that discovered the couple’s remains, says that, at the time, the researchers thought the burials “could be human sacrifice for the rampart” but weren’t sure—there was no precedent for a construction-related sacrifice on the Korean Peninsula. Kim and colleagues from the Gyeongju National Institute of Cultural Heritage continued digging. Earlier this year, a few feet away from the couple, they unearthed a third skeleton: a slight young woman wearing a bracelet and a glass earring. Now, the team is convinced the trio were killed in rituals intended to protect the building.

The ongoing excavations overall are opening a window to the earliest days of the Silla dynasty, which built Wolseong. The sacrifices and fortifications reveal how threatened these kings felt in the fourth century, hundreds of years before they came to control the entire Korean peninsula.

Wolseong is part of the Gyeongju Historic Areas, a UNESCO World Heritage Site that encompasses more than 7,000 acres of temples, tombs, pagodas, and other structures built in the first millennium. The area served as the heart of the Silla kingdom, which ruled the peninsula from the seventh through 10th centuries.

“It really is the state that was the first step towards forming what became Korea,” says archaeologist and historian Mark Byington, president of the Massachusetts-based Cambridge Institute for the Study of Korea.

But, at the time Wolseong was built, Silla was just one of several kingdoms or confederacies that partitioned the peninsula and fought fiercely over their borders. By the mid-sixth century, during what’s known as the Three Kingdoms Period, just a trio of rivals remained: Silla in the southeast, Baekje in the southwest, and Koguryo in what’s now North Korea and parts of China. While Silla’s rise to power during this period is well known, questions remain about the kingdom’s origins.

According to Korea’s oldest known written history, the 12th century Samguk sagi, or History of the Three Kingdoms, Silla was founded in 57 B.C., but archaeological evidence suggests otherwise. “There’s nothing resembling a kingdom until the fourth century at best,” Byington says. He notes that the Samguk sagi, compiled long after the Three Kingdoms period, draws from other, less reliable sources regarding Silla’s earliest days.

The Samguk sagi and archaeology do agree that Silla eventually outmaneuvered its rivals, and was the first unifier of the peninsula. Silla’s kings reigned from their palace at Wolseong, called the “moon castle” because the overall structure, built over a hill, resembles a crescent moon. (“It actually looks more like a donut cut in half,” says Byington.)

Archaeologists have been investigating the palace and its surrounding area for more than a century, and had found human remains before 2017. In the 1980s, a team unearthed a jumble of human and animal bones but did not suspect human sacrifice. Unlike the three bodies later found in the rampart foundation nearby, these earlier remains did not appear to be positioned intentionally as part of a ritual during construction. Gyeongju National Institute archaeologist Jang Ki-myeong, part of the 2017 team, remembers what it was like to find the couple, clearly placed in the rampart. “It was astonishing,” says Jang, speaking through interpreter and fellow researcher Juhee Lim.

Over the next four years, the team excavated a roughly 40-yard stretch of the rampart, which stood about 30 feet high. The digs revealed the various construction phases of the structure, how the bodies fit into it, and that third skeleton. The three victims were buried at the same time, right after the foundation layer was completed and before the structure began growing vertically. A few broken pottery pieces accompanied the older couple. Next to the young woman’s skull sat a complete ceramic jug with a smaller pot inside.

The researchers think the individuals came from a lower class because their bones and teeth show signs of nutritional deficiencies, and the young woman’s jewelry items were “not luxurious,” says Jang, adding, “We assume they are just ordinary, low-ranking people.” To learn more about the victims and their possible cause of death, the scientists are attempting to extract DNA and other chemical clues from the bones and surrounding soil.

The Korean Peninsula has numerous examples of human sacrifice associated with ancient tombs of the elite. Researchers believe the practice existed in Silla until the year 502 when, according to the Samguk sagi, the king outlawed it. The Wolseong sacrifices are unique, however, because they are associated with the construction of a building rather than a high-status tomb. Although similar sacrifices occurred in ancient China more than 1,000 years earlier, it’s unclear why Wolseong’s builders chose to include the dead within the palace ramparts.

The answer may lie in another major finding from the Wolseong rampart excavation. Radiocarbon dates confirm that construction began in the mid-fourth century and took 50 to 70 years. It’s further evidence that this period marks the start of the Silla kingdom, rather than the earlier, unsupported date. It would have been a perilous time for the emerging state, “assailed on all sides by other groups,” says Davey.

Silla’s rulers likely would have done whatever they could to safeguard their new palace, the heart of their burgeoning dynasty—including human sacrifice. Says Davey: “Every step would be taken to ensure that this centrally important fortress and palace would be protected and not fall.”

A city built on water was always going to struggle with burials—especially when a deadly pandemic came to town.
cults

At a site in Spain, archaeologists piece together the last days of Tartessos, an advanced society that vanished 2,500 years ago.
List

One of the world’s most historically contentious borders is peppered with intriguing attractions.
Video • Wonder From Home