The True Glory of Woodstock Is That They Managed to Clean Up So Well - Atlas Obscura
Want to see fewer ads? Become a Member. 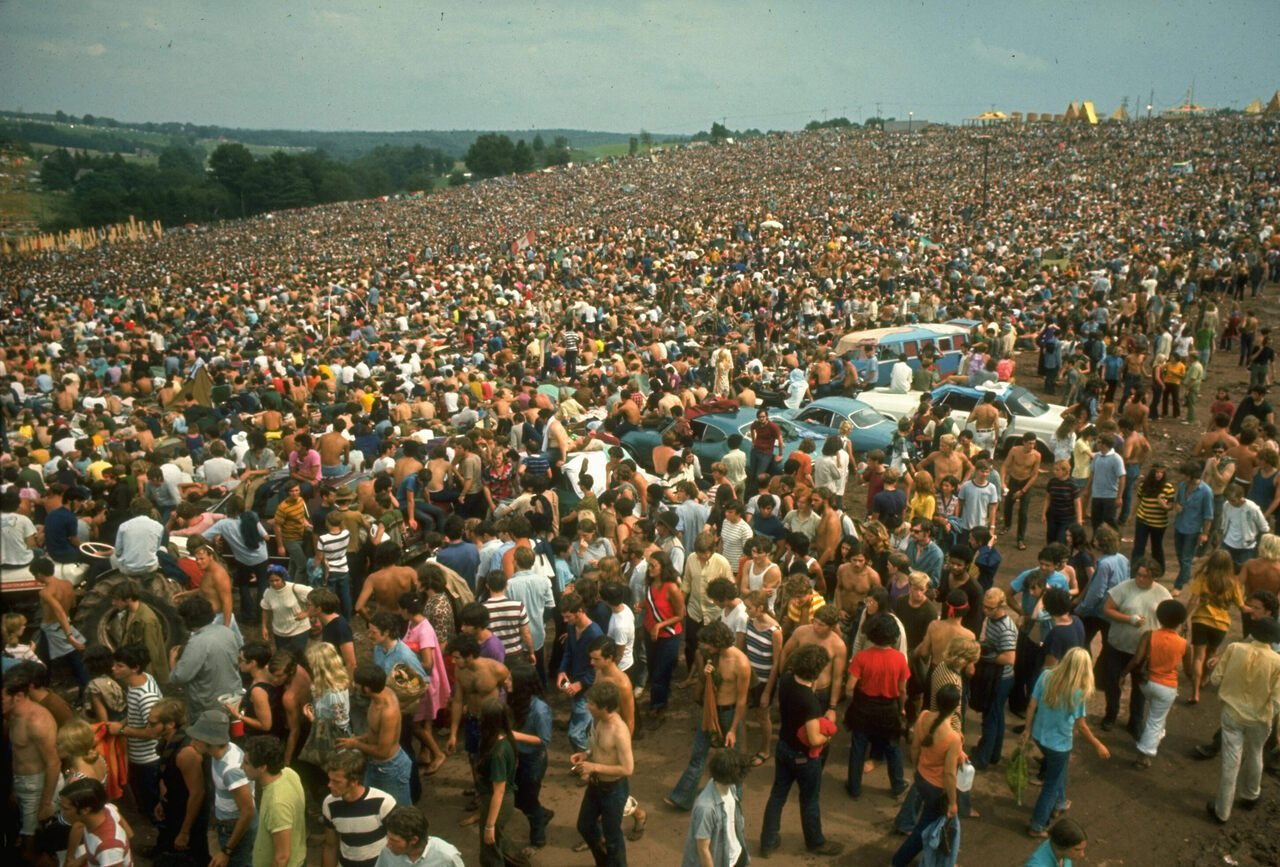 The crowd was much, much bigger than expected, which helped turn a music festival into the stuff of legend. John Dominis/The LIFE Picture Collection via Getty Images
In This Story
Place

The dairy farm in upstate New York where nearly half a million people gathered for three days of peace and music in 1969.
Destination Guide

Fifty years ago, a farm in Bethel, New York, traded 650 Guernsey cows for 400,000 human beings and a lot—a whole lot—of drugs. A few of those humans were famous, and were there to play music for the rest of them. The occupation there was brief, but intensive. It was August 1969, and the site has been widely interpreted as a kind of mass ritual gathering. It’s also been interpreted as Woodstock.

“For many hippies,” says Damon Bach, a historian at Texas A&M University, “it was three halcyon days where they were immersed in their ideal microsociety.”

Woodstock brings certain sounds and images to mind. Jimi Hendrix’s iconic “Star Spangled Banner.” Joe Cocker’s croon. Sha Na Na’s anachronism. Masses of people rolling around in mud, if just for a little while. And when the last notes of Hendrix’s “Hey Joe” faded, there was little to do in Bethel besides head home. But not before cleaning up.

Since the concert, not much has happened on the Woodstock site. There have been some anniversary events, sure, but nothing even remotely approaching the scale and impact of the first. This makes life easier for the archaeologists who have been digging into the material history of the legendary festival. Over the past two years, researchers from Binghamton University, in conjunction with the Museum at Bethel Woods, conducted excavations and surveys on the site, to see what 72 hours of peace and love look like 50 years later.

Unlike the deep, successive layers—known as stratigraphy—of places such as Tenochtitlan or Antioch that were occupied over thousands of years, Woodstock’s occupation layer is paper thin—three days of pandemonium sandwiched between unremarkable decades of pasture. In that layer, presumably, would be pull tabs from beer cans and beads and bracelets that got trampled into the mud or left behind in moments of ecstasy. Considering the size of the crowds, there ought to be a lot of it. But not as much as you’d think, it turns out.

“They planned on something in the tens of thousands and 400,000 showed up,” says Maria O’Donovan, a Binghamton archaeologist who conducted surveys on the site. “Things got out of hand.”

Photos of Max Yasgur’s farm right after the concert look like a tornado had gone through. Crates, plastic, and clothes were strewn about, and the farm’s green grass was trampled into oblivion. (Frankly, it looked like a lot of places when humans are done with them.) But in truth the clean up that followed was quick and thorough, helped by some 8,000 attendees who volunteered to help. That’s kind of a feel-good story for a feel-good weekend, but 50 years later, O’Donovan is a little sore about it.

“If you look at the pictures in the aftermath of the festival, the clean up efforts were pretty darn good,” she says. “Our excavations did not encounter a quantity of trash.”

In her line of work, trash is good, if not downright essential. Beginning in October 2017, the archaeologist was tasked with examining the Bindy Bazaar, an eclectic network of vendor booths and walking trails located in the wooded hillside adjacent to the festival grounds. Her team was supposed to survey for the remains of the booths and ultimately reconstruct the woods’ trail network.

“What we found is that the trail system we identified doesn’t really match up with the ideal plan,” says O’Donovan. “People made their own spaces. There’s the best archaeological evidence for that.”

Woodstock has become synonymous with America’s 1960s counterculture. Though it was a for-profit venture, the festival became free once it was overrun, and that ethos is what a lot of people remember about it. As O’Donovan says, “It wasn’t driven by the almighty buck. They didn’t have to pay five dollars for water.” (A New York Times article states that water was going for 25 cents—less than two bucks today.) The Bindy Bazaar was an extreme case—cash was off-limits entirely there. Booths were barter-only and attendees were encouraged to create trinkets and trade what they had on hand. Trails through the woods were overrun, and instead took shape wherever it made the most sense to roam. Joni Mitchell, who missed the concert when Crosby, Stills, and Nash took the helicopter without her, recalled decades later in Life magazine that the event was “a spark of beauty” where acid-tripping, middle-class kids “saw that they were part of a greater organism.” She added that, “If we don’t wake up ecologically, our organism will die.”

Woodstock, as publications noted at the time, was a health hazard. Brown acid aside, there were just 600 portable toilets for everyone. A storm system rolled through during the festival, so everyone and everything was soaked. The American Red Cross arrived with potable water and Governor Nelson Rockefeller debated deploying the National Guard.

“Woodstock happened in spite of itself, and those who were there to witness the coming together of humanity in the face of hunger, thirst, dampness, heat, and all other sorts of discomfort are forever affected,” says Julia Fell, assistant curator at the Museum of Bethel Woods. “Woodstock is a testament to what people can do when they are at their best and willing to work together in love and cooperation.”

That’s the message many take away from the weekend. There’s the way that history captures events, and the way they’re reinterpreted over time—all subject to perspective and hindsight—and then there’s the irrefutable evidence of the archaeological record. The survey and excavation work at the site is the first of its kind. “We’re looking for what people just did,” says O’Donovan.

On the Bindy Bazaar site, where the trail networks have been opened for visitors, Fell says they’ve found half-century-old wires embedded in tree bark that vendors used to set up tarps and display their goods. She mentions that a “lonely tire” marks the spot where a swing once hung. O’Donovan came across a small circle of rocks that may have been a fire pit. The scene in the woods was bucolic and amiable, a spontaneous respite from the cacophony of the pasture below.

“The Bindy Bazaar was a vibrant and bustling part of Woodstock, which is often overlooked because so much focus goes towards the concert and main field,” says Fell.

Since the bazaar surveys, the Museum at Bethel Woods also sponsored excavations of the area surrounding the stage, hoping to get a better idea of the event’s layout. They found it—a posthole marking where a fence kept concertgoers from encroaching on the stage. With that evidence, Fell says, the museum can extrapolate the locations of the stage and Woodstock’s last-minute, makeshift lighting and sound systems, which were intended for a crowd so small that most attendees didn’t hear a single note.

Though the archaeological work was conducted in anticipation of what would have been a huge 50th anniversary concert, the event’s cancellation has not deterred O’Donovan. She says she wants to dig on the Hog Farm’s site next, where attendees built large fire pits—“more interesting features,” archaeologically speaking. And it is thought that the population that frequented the Hog Farm might be different than the mainstream hippies listening to Sly & the Family Stone.

“There wasn’t necessarily a single counterculture movement,” says Patrick Burke, the head of Washington University in St. Louis’s musicology department. “A lot ideas and lifestyles intersected. Woodstock almost becomes a commune. The audience was required to pull together and take care of themselves, on their own.”

The archaeology corroborates a base fact, that for many attendees, Woodstock wasn’t really about Jefferson Airplane or Country Joe and the Fish, so much as it was about removing themselves from the world of the Vietnam War, from the struggles of protest, the civil rights movement, and the sexual revolution. The archaeology didn’t turn up any sleeping bags, crumpled umbrellas, copies of The Feminine Mystique, or drug paraphernalia. Woodstock’s trails were found to be made in the spirit of cooperative mayhem. They were free-form, and cleaned up pretty well.

The Archaeologists Recreating the Sounds of the Stone Age

Researchers are working to uncover whether ancient objects in South Africa were once used to make noise or music.
archaeology

In Maryland, archaeologists are racing rising waters to find traces of the past.
art

In a workshop in Lebanon, an oud maker continues an ancient tradition.
beer

Scientists are partnering with brewers to taste test ancient recipes and sip a long-lost past.
Video • PinDrop

The Messy Business of Scrubbing 2,000 Years of Bird Poop From an Egyptian Temple

The crap covered up cartouches and constellations.
Read more
Thanks for sharing!