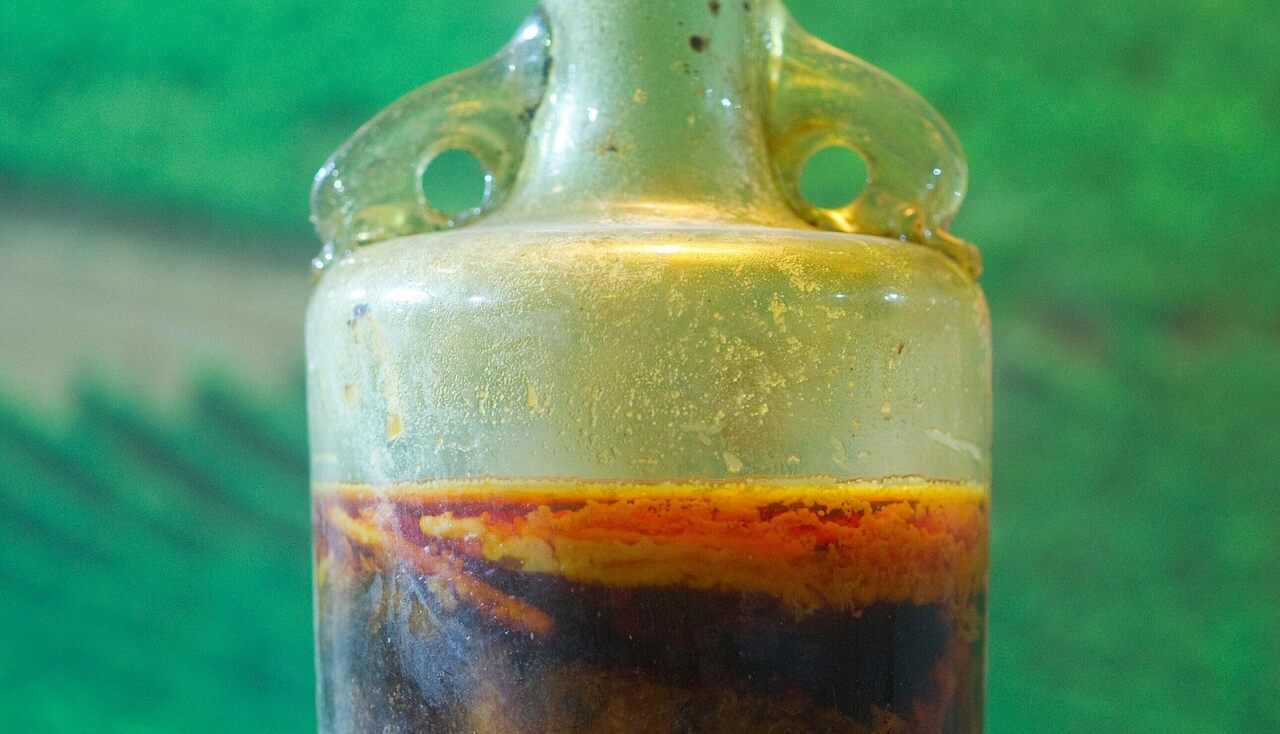 For the last hundred years, Germany’s Historical Museum of the Palatinate has housed the world’s oldest unopened bottle of wine. But a century is nothing to the Speyer wine bottle, also known as the Römerwein aus Speyer. Its murky contents have sat undisturbed inside clear glass for 1,693 years.

The 1.5 liter bottle has handles shaped like dolphins and was buried in the tomb of a Roman nobleman and noblewoman near today’s city of Speyer. Researchers estimate that it dates to around 325 C.E. When the tomb was excavated in 1867, other wine bottles were found, long since shattered or empty. In earlier eras, Romans cremated the dead. But by the time of the Speyer bottle, Romans laid corpses to rest in sarcophagi with grave goods, which included everyday items, including wine.

The wine inside the Speyer bottle was likely made from local grapes that were planted during Roman rule. Unknown herbs were added as well, perhaps as flavoring or as a preservative. The residue inside, however, is no longer truly wine. Instead, it consists of a solid, dark mass and a milky liquid. Even the survival of that residue is unprecedented. An unusually well-made bottle that stayed airtight over the millennia, a wax seal, and a thick layer of olive oil preserved its contents from totally evaporating. In fact, more oil than wine was poured into the bottle, creating the dense, solid layer visible through the glass.

So, could you drink what’s left?

On a microbiological level, yes: Researchers say it’s likely safe and won’t kill you, although the wine won’t taste good. But you’d first have to wrestle the wine away from the museum, where staff refuse to open the bottle, even for research. According to a local news report, most of the museum staff is too afraid to handle the bottle. It’s hard to say which would be scarier: dropping the world’s oldest bottle of wine, or actually drinking it.

Researchers enlisted microbes to create a model for a self-sustaining food web. But the finished meal looks like goo.
wineobjects of intrigueromanalcoholarchaeologyfood

Unearthing a Roman Villa Under a Working Vineyard

The wealthy once labeled their ketchup, soy sauce, and champagne with style.
beer

Welcome fall in Germany with this fizzy, refreshing young wine and a slice of savory onion tart.
Gastro Obscura

Pressed from frozen grapes, this prized wine was a sweet accident.
Gastro Obscura

Deer antlers were once essential to light and fluffy baking.
Gastro Obscura

These Bavarian cookies are also intricate works of art.
Related

Police suspect a rival grape-grower got a little jelly.
Read more
Thanks for sharing!