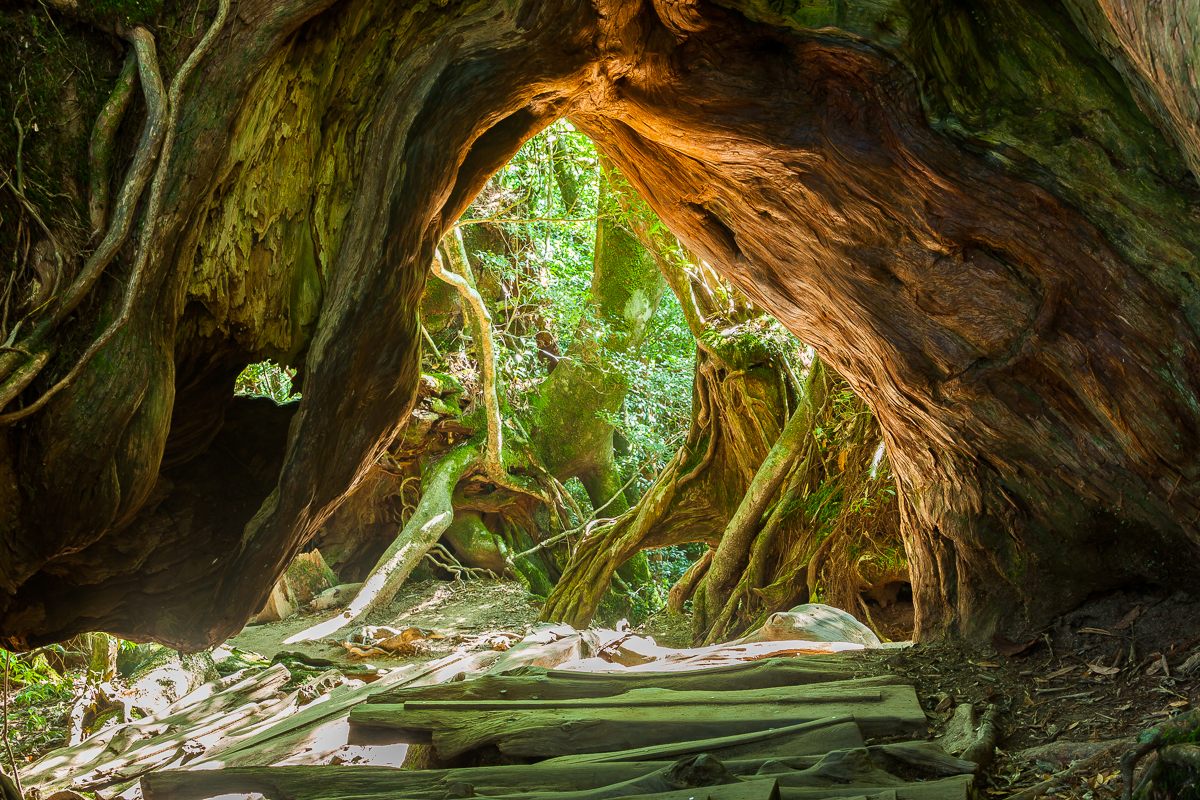 Triangular openings that hikers can crawl through are born from the forking of trunks at the base of large trees. All Photos: Wil Kuan

Yakushima is an almost perfectly round island 37 miles south off the southernmost point of the Japanese island of Kyushu. Its remote and isolated setting is home to one of the best-preserved moderate temperate growth rainforests in Japan.

The 17-mile-wide island also possesses one of the wettest climates anywhere in the world, so much so that locals say it rains “35 days a month.”

Diverse ecosystems coexist here, ranging from subtropical lowlands, to cool temperate highlands, where it can even snow. The combination of these factors has given Yakushima a mystical aura that is often compared to fantasy lands such as the island where King Kong resides (in large part due to its almost perfectly round shape), as well as providing inspiration for the animated film Princess Mononoke from the Japanese animation powerhouse Studio Ghibli.

To reach Yakushima, you take a leisurely four-hour ferry ride from Sakurajima, famous for its active volcano that makes headlines every few years as it spews ash to cover the city. The ferry lands at the north of the island in the port settlement of Miyanoura, where the majority of Yakushima’s population of about 13,000 resides. The rest of the population is sprinkled along the coastline supporting mostly tourism activity that has replaced the logging economy that once thrived here.

The desire for a spiritual experience with nature lures many to this island, where many Japanese salarymen relieve job stress by hiking the interior mountains. There are multiple walking trails, some of which traverse the entire width of the island. For those who wish to do overnight hikes, simple mountain huts found along certain parts of the trails that can be used free of charge.

The trails wind among Yakushima cedar trees (Yaku-sugi), which are famous for their incredibly old age. Most are around 1,000 years old, and a few are believed to be older than 7,000. Due to the abundant rainfall, there are moss-covered rocks all over the forest floor, which add to the overwhelming green.

The largest animals to be found are Yakushima macaque monkeys and spotted white sika deers that are endemic to the island. These two creatures sometimes show a symbiotic relationship. Some visitors have even reported seeing monkeys riding the deer for transportation purposes.

Which Two Songs Are the First to Be Encoded Into the Fabric of Life?

Advances in synthetic DNA are offering a way to preserve music forever, like a fly in amber.
visualislands

Lucas Bustamante wants you to fall in love.
libraries

See the Crumbling Concrete Dwellings of an Abandoned Japanese Island