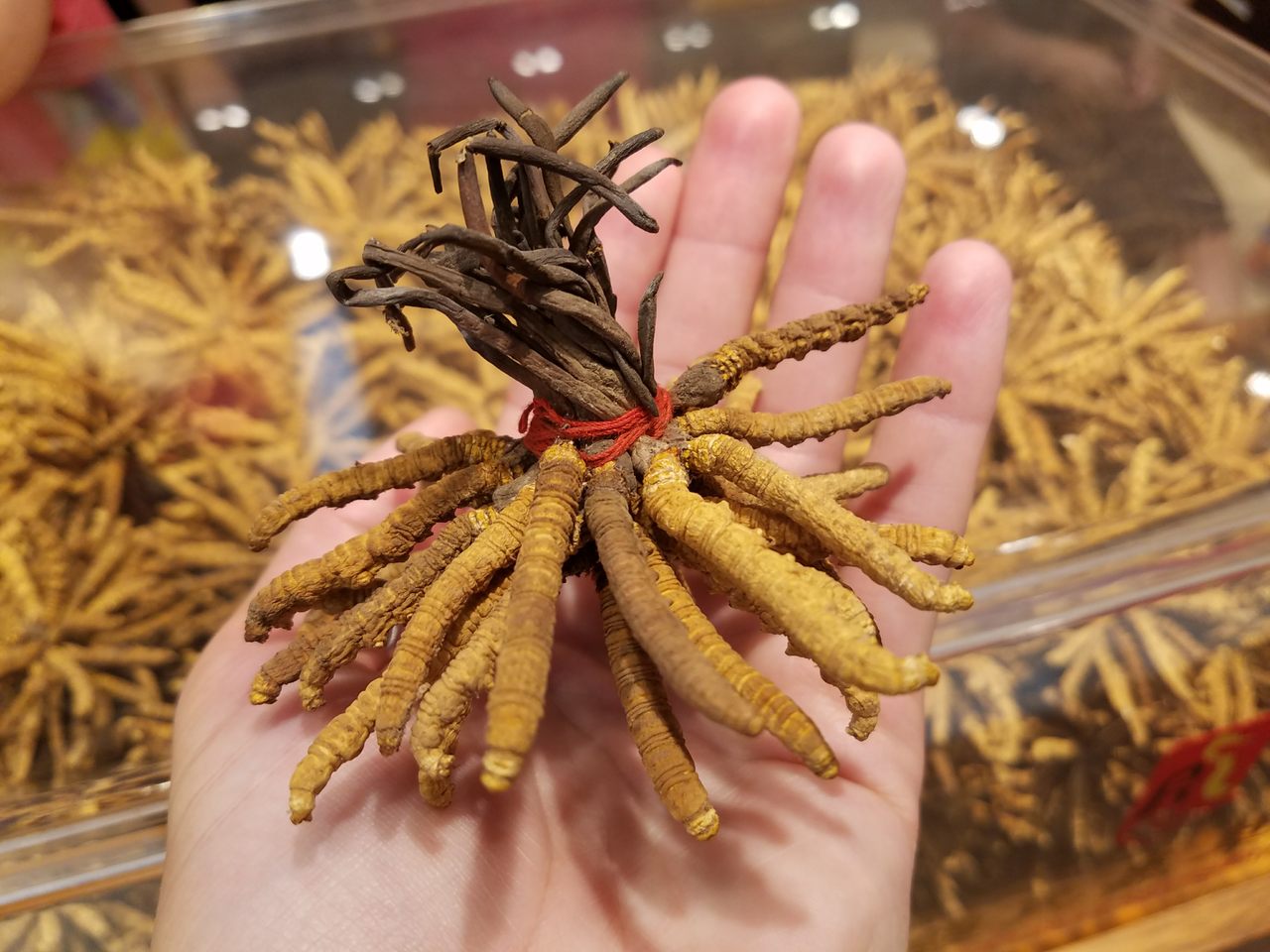 Cordyceps for sale at a high-end Chinese medicine store. Kelly Hopping
In This Story
Destination Guide

Growing up in rural Tibet in the early 2000s, Nlang Mao Tso spent her childhood summers trudging along mountainsides, searching the ground with a tiny pickaxe in hand. When she found treasure—caterpillar fungus—she placed it in an instant noodle cup.

Caterpillar fungus, also called cordyceps or even the “zombie mushroom,” is unusual in that it propagates itself by infecting one specific insect: the ghost moth caterpillar. Upon entering its gut, the mushroom slowly kills the caterpillar, then “mummifies” its body, until there is nothing left a but a long, tube-like mushroom. Finally, a stalk bursts out of the caterpillar’s head, ready to infect any other caterpillars in the vicinity, like something out of the Alien movies.

After a day crawling along the mountainside, raking the ground, Nlang Mao Tso could usually expect to bring home at least a few caterpillar mushrooms. It was hard work. But Nlang Mao Tso, who is now a student at Tibet University, has fond memories of a childhood spent collecting. It was a community activity—her whole village would head to the mountain, singing Chinese pop songs and playing pranks on one another as they worked.

Tibet is one of the few places caterpillar fungus grows—the mushroom is found only in the Himalayas and Tibetan Plateau above 10,000 feet. And in this part of the world, cordyceps fuels an entire economy. Prized across southeast Asia for its medicinal properties, the fungus fetches as much as $30,000 per pound—enough to pay for her education, from schoolbooks to college tuition.

“People can make so much money collecting it that they don’t need to do anything else the rest of the year,” says Kelly Hopping, an ecologist at Boise State University who spent years on the plateau watching the cordyceps collectors at work.

But soon, this all could change: Climate change and decades of overharvesting have made it harder and harder to find the mushrooms, according to a November study by Hopping and two colleagues published in Proceedings of the National Academy of Sciences.

In China, the primary consumers of caterpillar fungus, researchers are well aware of this fact. Chinese pharmaceutical companies are racing to develop a workaround: Instead of raking the mountainside for the subtle tubular fungus, why not cultivate it on a large scale in a lab?

Attempts at artificial cultivation began in earnest in the 1990s, spurred by two crucial events. In 1993, Chinese distance runners broke several world records in succession while on a diet regimen purportedly including cordyceps. Demand skyrocketed. Then, in 1999, cordyceps was listed as an “endangered species for protection” by the Chinese government. But it wasn’t until around 2014 that scientists succeeded at growing the mushrooms on a large scale, according to Caihong Dong, a microbiologist who researches cultivation for Sunshine Lake Pharma, one of the companies rushing to perfect the process.

The industry is fiercely competitive. So far, only three labs have succeeded at growing the mushroom indoors, says Dong. And all of those in the race have guarded their methods.

“They are all keeping it a secret,” says Dong, who is also affiliated with the Chinese Academy of Sciences in Beijing. “No connection, no communication.”

The process is tricky. Not only do scientists have to get the fungus to infect the caterpillar, they first have to keep both parties alive. And it turns out that caterpillar fungi are quite finicky. They require conditions that mimic the 10,000-foot Tibetan Plateau: very cold temperatures and low oxygen. In the wild, the caterpillars take four to five years to mature enough for the fungus to attack them, though labs have cut that process down to two years. The caterpillars also get sick very easily, according to a review of cultivation breakthroughs published earlier this year in Critical Reviews of Biotechnology. Researchers have to pamper the caterpillars, feeding them on a diet of carrots and special probiotics to boost their immune systems.

After keeping the caterpillar alive for years, the scientists then have to figure out how to get the fungus to kill it. In the wild, only one in 1,000 caterpillars get infected. But Sunshine Lake Pharma in Guangdong, China, has drastically improved those odds. Its two laboratories produce 10 tons of the fungus annually, and after the company finishes building a third, even larger laboratory, it expects to produce 20 percent of the world’s supply of cordyceps.

Chinese researchers have generated a slew of research in recent years purporting to show that the fungus is an effective treatment or cure for myriad conditions, including multiple types of cancer, erectile dysfunction, diabetes, Parkinson’s disease, dementia, and even SARS, the deadly viral respiratory infection that killed 774 people in 2003.

Some Western experts, however, are skeptical of the claims. They note that these studies have been almost entirely carried out in rats and in test tubes—methods that don’t accurately predict the effects of cordyceps on people. The few studies that do involve humans use very small sample sizes, and often aren’t double-blind—people know when they’re getting cordyceps versus a placebo—two factors which can lead to biased results.

Despite the uncertainty about its benefits, the demand for the fungus has been unquenchable—and thus a boon to the Tibetan Plateau, where wild cordyceps collection makes up close to 80 percent of the local income in some areas. But the prospect of mass propagation in labs could soon disrupt livelihoods for hundreds of thousands of people.

“Now that they have been successful cultivating cordyceps in the lab, it’s no longer a necessity to harvest,” says Dong, through a translator.

And while artificial cultivation hasn’t had any impact on wild collection so far, there are some signs of discontent on the plateau, Dong adds.

“Local governments in areas of wild cordyceps were not supportive,” she says, “they weren’t trying to oppose, or interfere, but they weren’t enthusiastic.”

Part of the concern is that labs like Dong’s are getting better at producing high-grade mushrooms that are fuller, cleaner and more attractive than most wild varieties. Plus, the labs can produce the mushroom year-round; wild cordyceps only appear in the summer.

Not everyone is alarmed, however. In Bhutan, local cordyceps collectors aren’t concerned because the wild mushrooms have other advantages, according to Kesang Wangchuck, deputy chief research officer at Bhutan’s Renewable Natural Resources Research Center.

“Cordyceps grown in the wild and cultivated cordyceps are different in value,” he says. People believe that nature itself imbues the caterpillars with their purported (if scientifically dubious) ability to cure most illnesses. Although ecologists aren’t sure what ghost moth caterpillars eat, many locals believe it’s the medicinal plants that the insects munch that gives them their healing properties, Wangchuck says; carrots just wouldn’t have the same effect.

But the biggest threat to wild cordyceps collection isn’t artificial cultivation. It’s the one-two punch of overharvesting and climate change, according to Boise State’s Hopping.

“It’s a sticky thing—short of thinking of a sustainable way for people to harvest it, it’s a lose-lose situation,” she says.

Nlang Mao Tso has noticed this decline. She remembers when collectors would easily bring home 100 of the mushrooms in one day. Now, they’re lucky to find 20.

A key problem is that consumers prefer mushrooms that haven’t grown spores yet, and therefore haven’t had a chance to reproduce, Hopping says.

She analyzed over 18 years of interviews with cordyceps collectors across the mushroom’s range, and the vast majority of collectors asserted that they saw fewer mushrooms. The collectors blamed overharvesting. However, considering the cordyceps’ extremely specific habitat requirements, and its location in one of the most rapidly warming areas of the world, Hopping thinks it’s likely that climate change is worsening the problem of unsustainable harvest.

It may turn out that artificial cultivation is the only way to fulfill the enormous demand for cordyceps without driving the wild variety to extinction, Sunshine Lake Pharma’s Dong says. Despite the endangered status of the cordyceps, people keep collecting in new areas.

But how it will impact the collectors, she adds, is still an open question.

A young medical researcher's idea led to a powerful weapon against the disease—and a Nobel Prize.
food

Caffeinated soups and chewing the leaves were once the norm.
dinosaurs

Or at least it used to. What can these recently identified dino-birds teach us about extinction?
food

Layers of meaning surround the names of nearly every dish.
Video • Object of Intrigue

14:07
Want to see fewer ads? Become a Member.
From Around the Web
Atlas Obscura Trips
China: The Great Cuisines of the Middle Kingdom
View This Trip
Thanks for sharing!