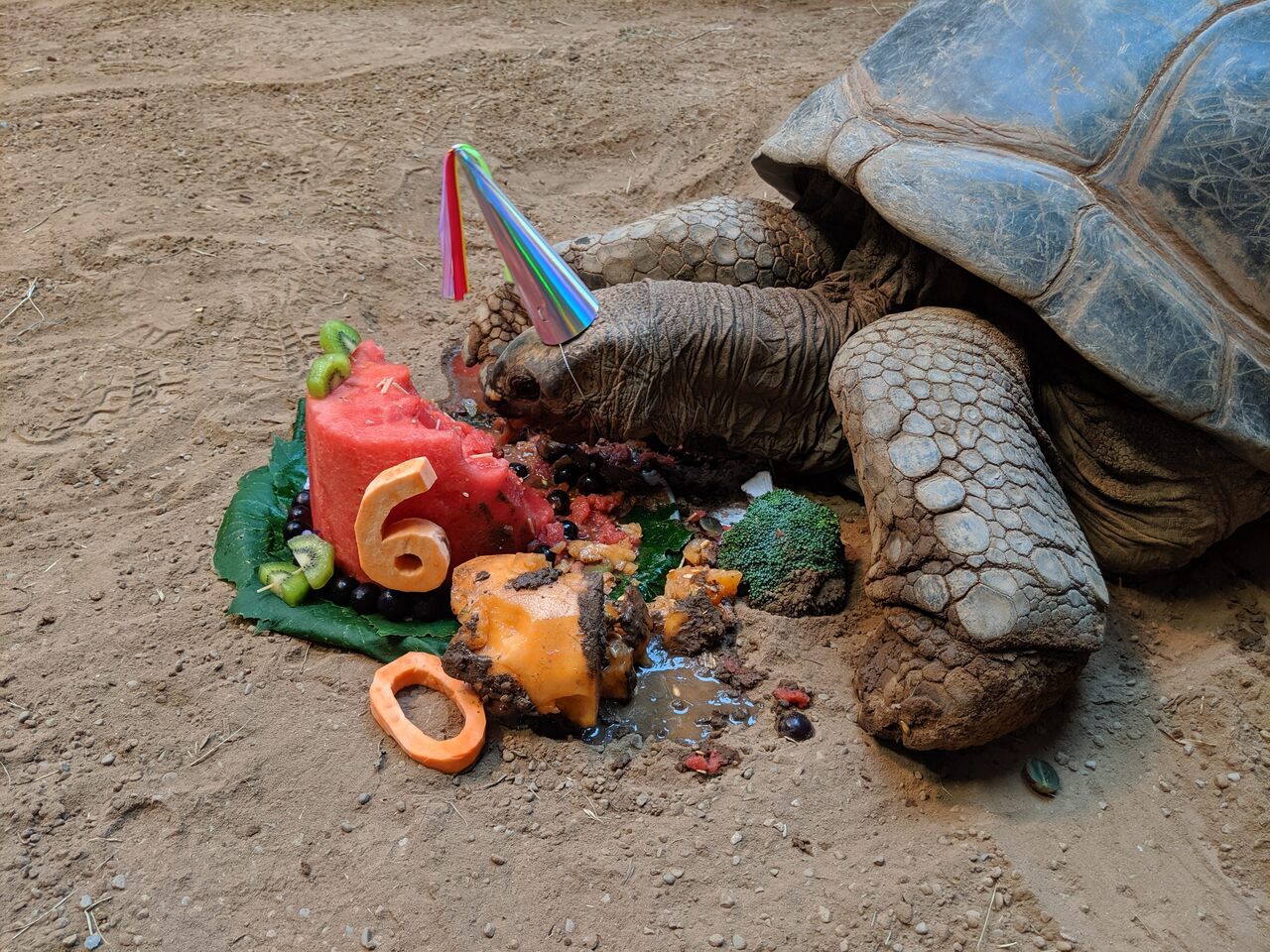 Last summer, for the 50th birthday of Nenette the Bornean orangutan, one of the oldest in captivity, her keepers at Jardin des Plantes zoo in Paris presented her with a strawberry layer cake crowned with tropical fruit. Adelaide, a short-beaked echidna at Illinois’ Brookfield Zoo, also got a cake when she turned 50 last spring, although her gooey treat was frosted with wax worms.

Henry, an Aldabra tortoise with a decade on both dames, celebrated his 60th birthday with a decadent confection made of watermelon, cantaloupe, grapes, kiwi, sweet potato, broccoli, and edible flowers—all held together with raw spaghetti. The gentle senior of Clyde Peeling’s Reptiland in Pennsylvania usually grazes on grass and hay, and he had never received a birthday cake before; he munched on it while wearing a party hat. “Sometimes he tried to take another bite before swallowing the one he had,” says Kalin Palmatier, a Reptiland spokesperson. “This was a lot of fruit at one time, but you only turn 60 once!”

Reptiland began making birthday cakes for its critters a few years ago, joining countless other zoos around the world in commemorating their residents’ birthdays. These creative concoctions typically consist of ingredients an animal would receive in its daily diet, plus special treats. Whether made of broccoli or bugs, birthday cakes can serve as an appropriate source of nutritional enrichment, helping to encourage an animal’s natural behavior. “Keeping a wild animal in captivity comes at a cost to that individual,” says Lisa Riley, an animal welfare scientist at the University of Winchester who recently co-authored a study on environmental enrichment in zoos. “A birthday ‘cake’—if it contains novel but appropriate food or presents food in a different way—has the potential to improve welfare by motivating the animal to problem-solve, try new tastes or textures, and making the animal engaged and satisfied.”

At the Taipei Zoo, panda twins Tuan Tuan and Yuan Yuan have been receiving stimulating birthday cakes since 2009. “Through the spreading of food and hiding it in the equipment we designed, they are willing to spend time solving the problem they face, just like they do in the wild,” a zoo spokesperson writes in an email. Last year, the 15-year-old twins enjoyed a playful ice-block cake in the shape of a unicorn that was loaded with balloons, bamboo leaves, sugarcane, and a lot of fruit. “It was a big surprise, as the amount of fruit was quite different from an ordinary day,” the spokesperson adds. “Tuan Tuan was excited.”

Birthday bashes for zoo residents have become trendy with the rise of social media, but they are far from new. The Bronx Zoo was one early adopter of the tradition. In the 1930s, its keepers began serving cake to its hippopotamus, Peter the Great, who lived to the ripe age of 49. Intrepid reporters at The New York Times attended his fêtes every year: “ZOO HIPPO’S PARTY UPSET BY HOYDEN,” read one 1933 headline, on Peter’s 30th birthday. (An elephant had swiped the birthday boy’s four-layer cake, and Peter ended up gobbling up the plate.) The following year was no brighter: “ZOO HIPPO GLUM ON 31ST BIRTHDAY,” the Times announced. “Boys Steal Cake, Promise of Rain Fails and Peter the Great Begins to Feel Age.” By his late 30s, Peter seemed to tire of the festivities. His keeper tried to dump a 50-pound cake of bran, ground carrots, oatmeal and hay—topped with 38 iced carrots—into the hippo’s maw. The Times reported: “ZOO HIPPO SPURNS A BIRTHDAY CAKE; Big Pete, Now 38, Merely Nips a Few Carrots in Bronx, Then Makes Beeline for Pool.”

If media frenzy is a measure of fame, the Peter of today might be Fiona, the Cincinnati Zoo hippo and internet star. The three-year-old has enjoyed birthday parties since her first birthday in 2018, when the zoo threw a day-long bash and distributed Fiona-themed goodies. The zoo’s nutritionist has since made the world-famous youngster a giant fruit cake every year, and thousands of fans, both in-person and online, watch her devour it.

This might be savvy marketing for zoos, which often face criticism from animal rights activists, but safe celebrations do have the potential to raise public interest in conservation efforts. “Having a birthday makes animals more relatable to people who care little or are disconnected to the natural world—particularly pertinent at this time when disrespect for nature may have caused a pandemic that challenges the livelihoods of people and animals across the globe,” Riley says. “Showing an animal is an individual with a name and a particular age that should be celebrated allows people to value an animal.” It also showcases the hard work of the animal’s keepers.

But even birthday boys and girls need to watch their diets. Many zoos have an on-site catering staff, which may work with keepers to design cakes that are both Instagram-worthy and nutritious. Recently, the Shedd Aquarium whipped up an extravagant but healthy sweet potato pie with a crust of tortoise pellets for Yam, its giant river turtle, complete with kale candles. (The 28-year-old demolished it in 10 minutes.) At the Toledo Zoo, an executive chef oversees the construction of edible arrangements for the park’s megafauna, including its herd of African elephants. “In the beginning, the cakes were more peanut butter-based, a little more of a treat,” says Kim Haddix, the zoo’s spokesperson. “Now, with some of the changes in animal care and diets, we try to give them more to fruits and vegetables and keep them on a little healthier side.”

Adjustments also have to be made for health reasons. The Virginia Zoo laid out a special picnic for the first birthday of its twin screaming hairy armadillos, Dora and Diego, feeding them their routine insectivore grain, fruit and veggies, and mealworms. But shortly after, Diego was diagnosed with megaesophagus—a dilation of the esophagus—and he now needs to be held upright and fed soft foods. So for their second birthday, last year, the twins received cakes of insectivore gel that were iced with a blend of baby food, honey, and food coloring. The reviews were still positive. “They ate it with gumption and didn’t leave anything behind,” says zoo spokesperson Tara Baumgardner.

The hirsute siblings turned three in late April, but they enjoyed a quiet birthday in their enclosure, away from the public eye. “We don’t always do a celebration for each animal’s birthday,” Baumgardner says. “It’s a lot.”

Before cows and chickens, cuscuses may have been the original livestock.
science

The unlikely method may reshape an unhealthy relationship between farmers and lions.
dinosaurs

Nothing adds prehistoric flair to a decorating scheme quite like a moving T. rex.
Video • Wonder From Home