Join us for a one-hour virtual tour at the private North London studio of Bellerby & Co. Globemakers, where artisans from around the world handcraft and hand-paint a dazzling array of bespoke globes!

Led by founder Peter Bellerby, you'll get a behind-the-scenes look at the globe-making process in action. We'll join the talented makers and painters while they work on globes of all sizes (their largest is over four feet in diameter!). Nearly the entire production process - from casting the sphere to setting the finished globe on a custom base — is done in-house by the company's team of expert cartographers, woodworkers, metal-workers, engravers, illustrators, watercolor artists, and globemakers. It can take weeks or even months to produce a single globe. Each Bellerby & Co. globe is one of a kind and passes through at least five sets of hands from start to finish.

In this tour, we'll focus on the processes of map design and map-making, color selection and painting, and the traditional style of globemaking which requires applying paper gores to the sphere. As we check out current projects in the studio, Peter will share the unique story of how the company came to be, discuss the difficulties of creating a world map for today's global audience, and answer any questions you may have.

Don't miss this special look inside the world of the artisans that literally make the world go round! 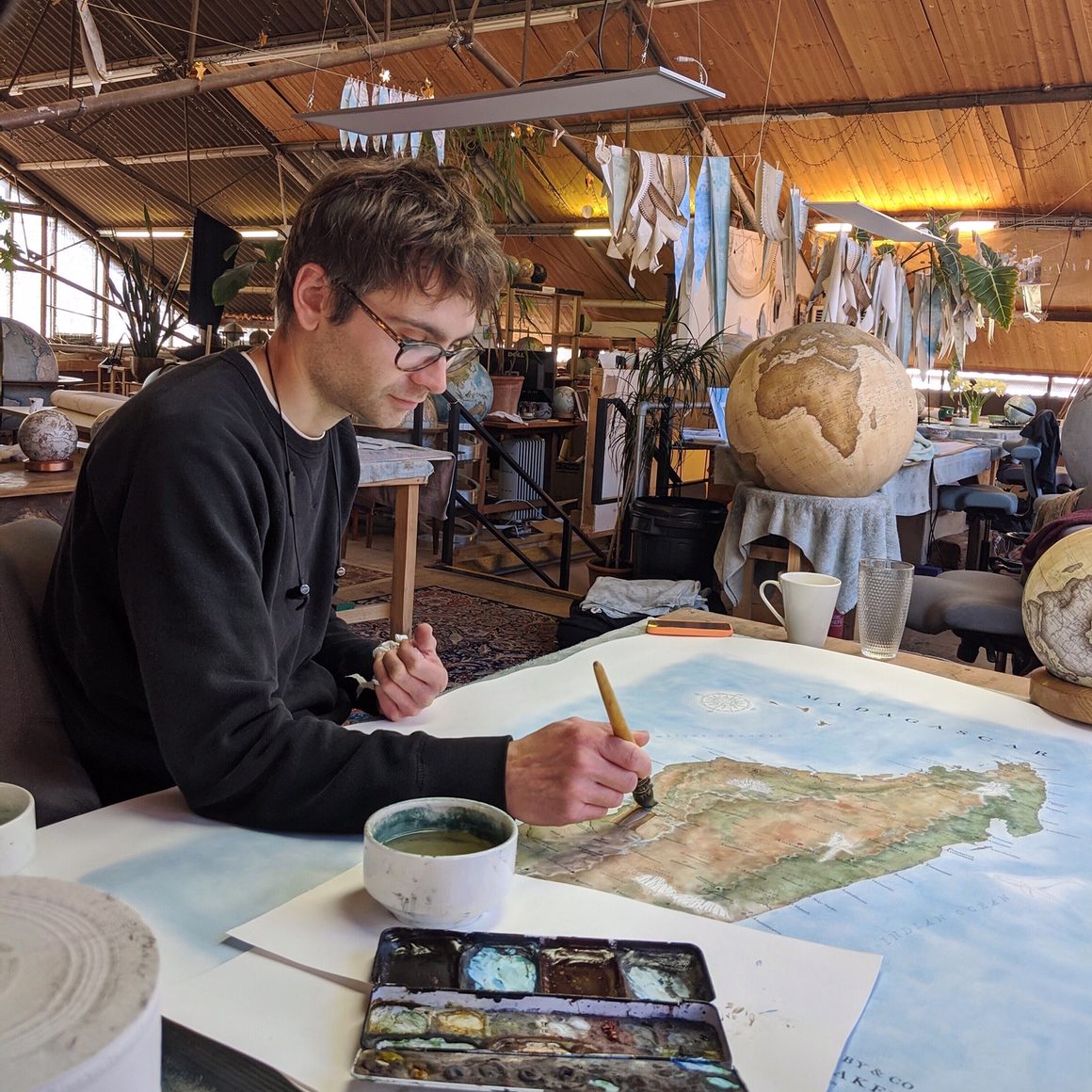 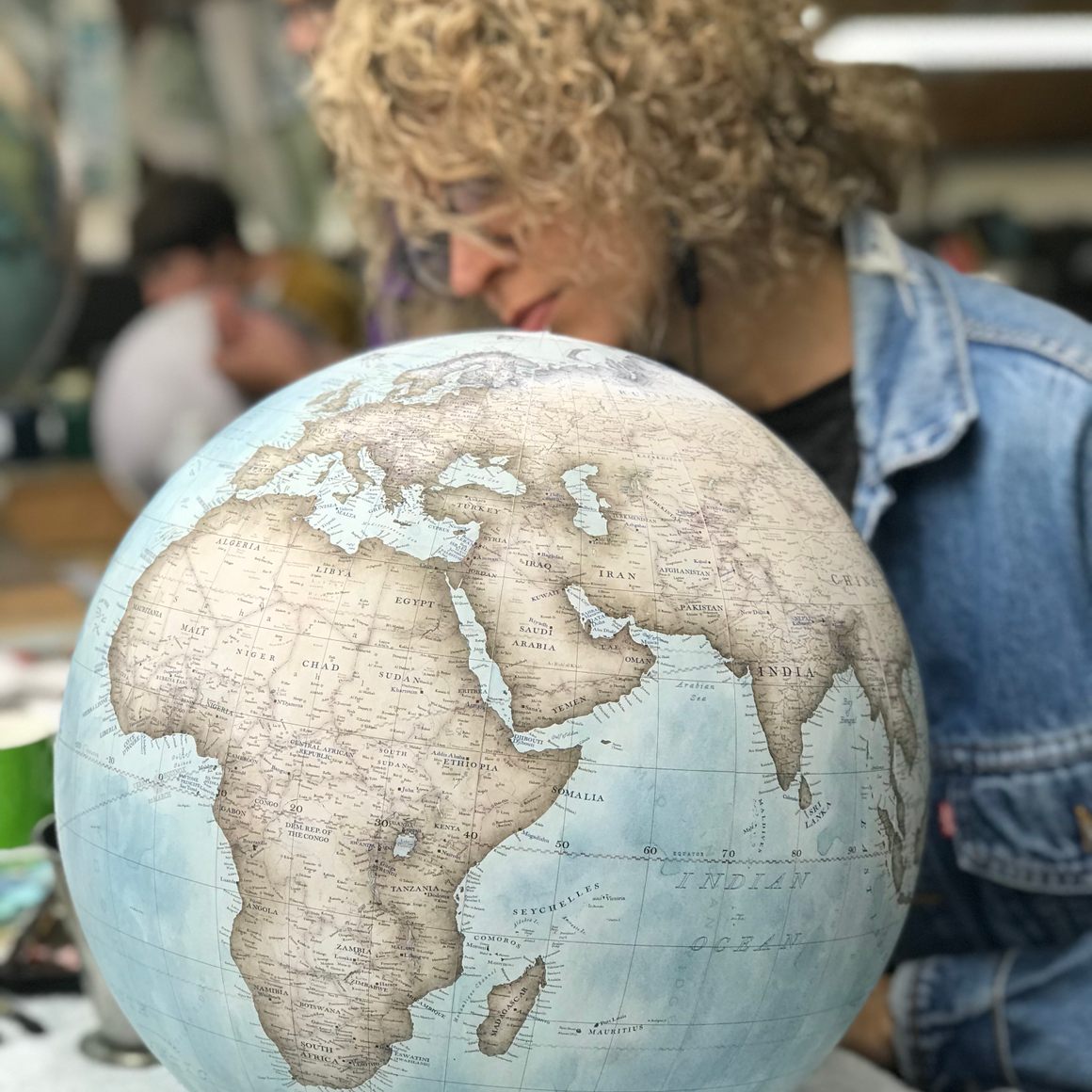 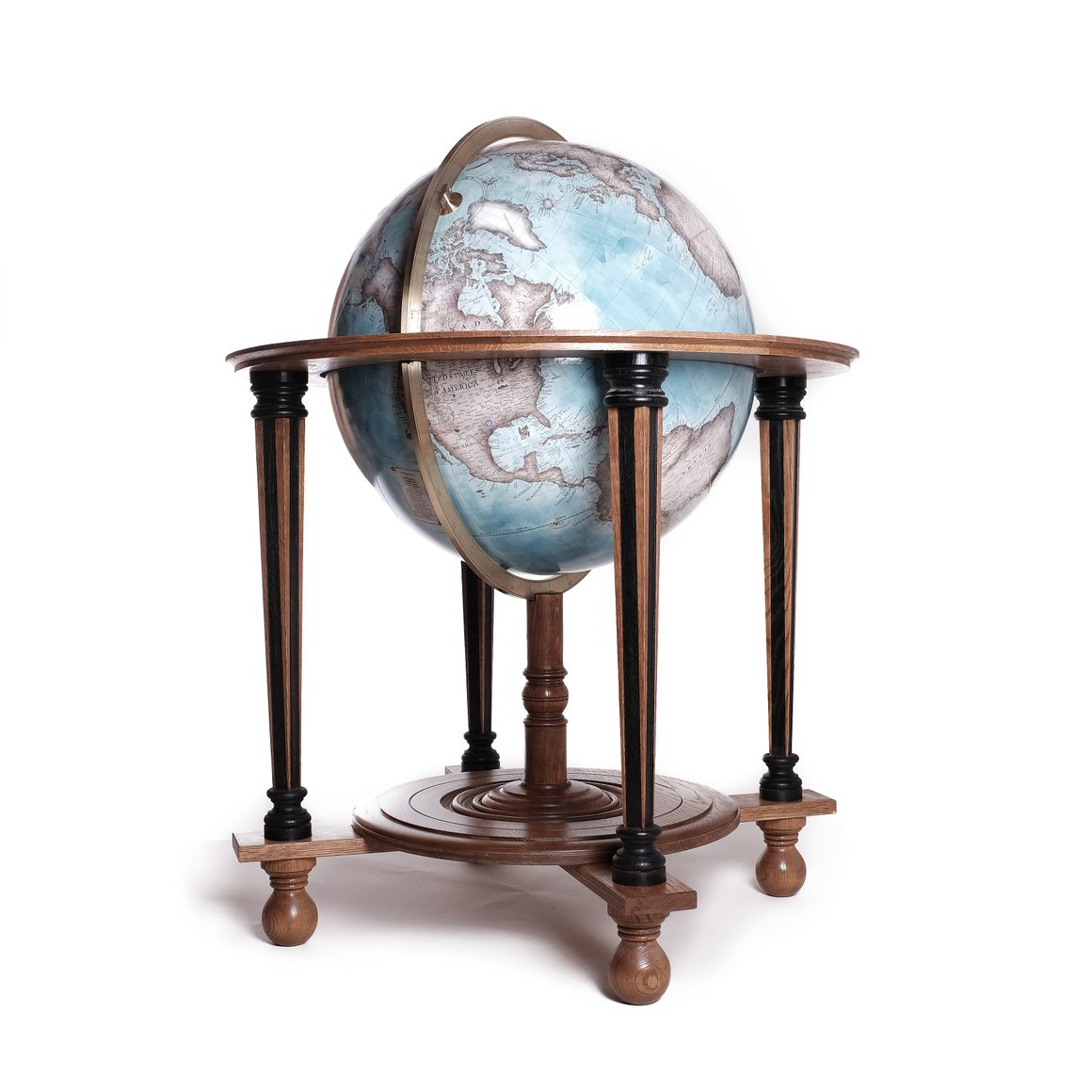 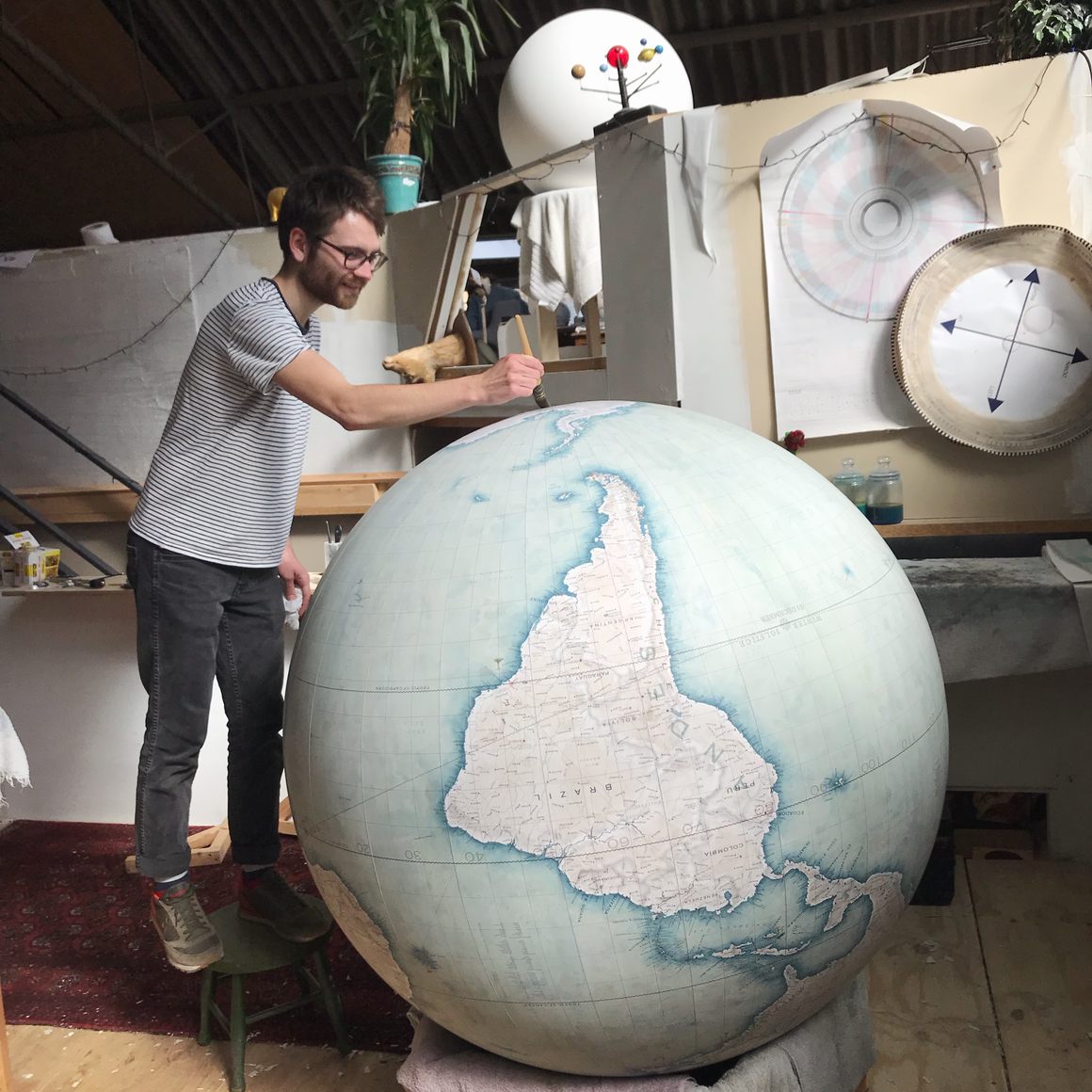 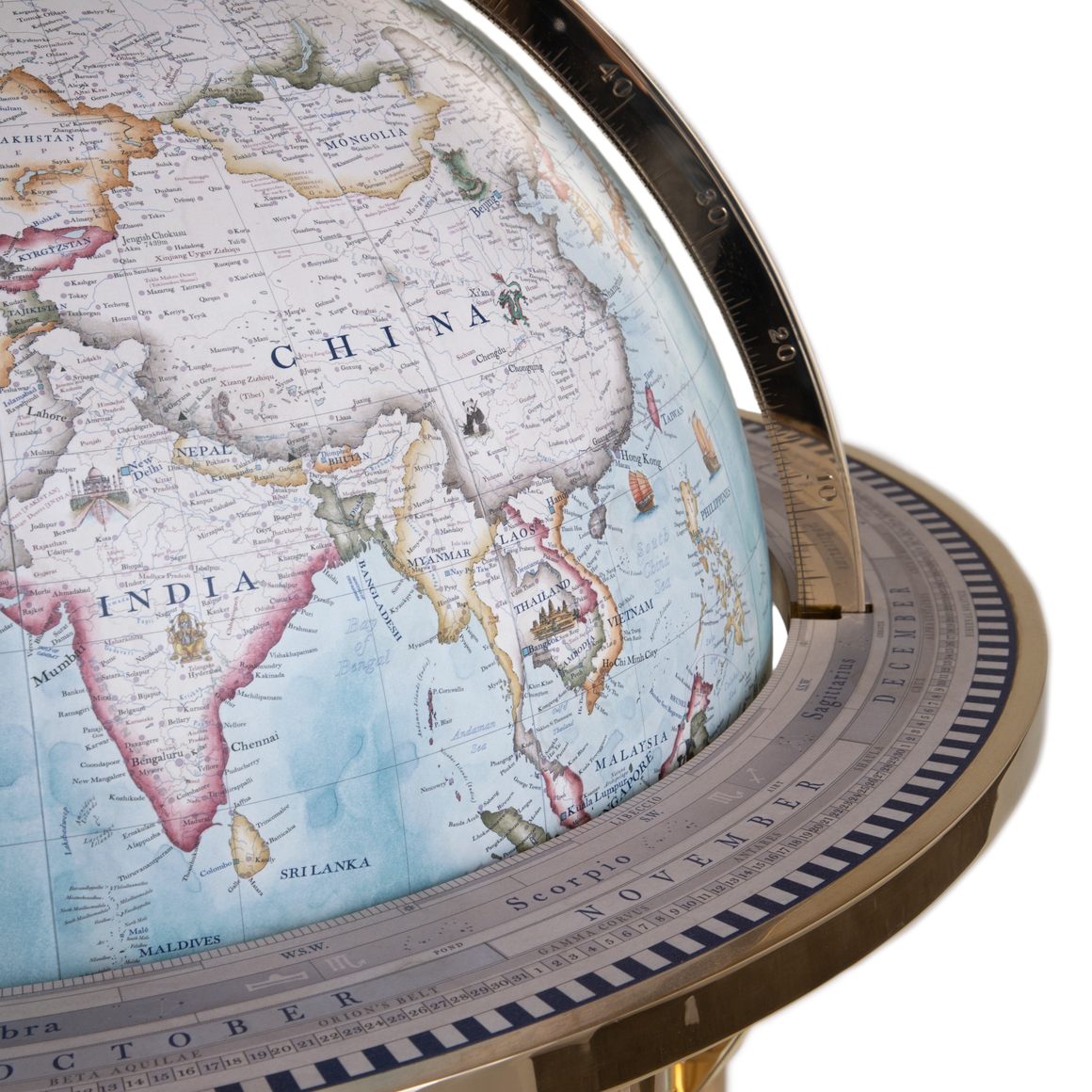 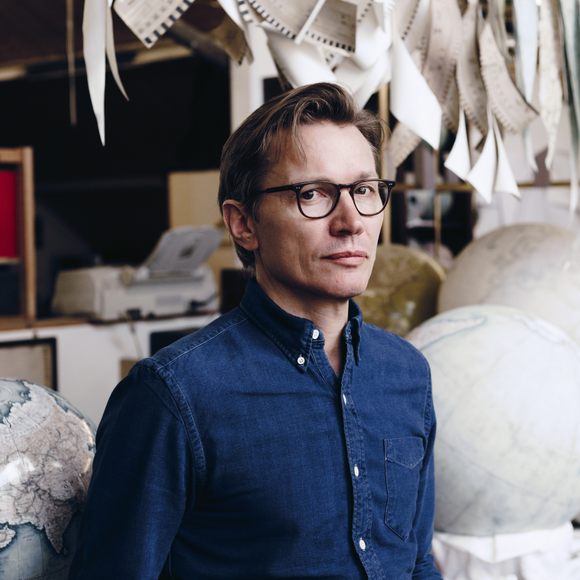 After a fruitless search for a globe for his father’s 80th birthday present, he set about making one himself.
Expecting the whole project to take three, maybe four months and cost a few thousand pounds; after all how difficult can it be to make a ball and put a map on it? It ended up taking two years, all his savings, and more…

Goring the globe (applying the map) was something that took eighteen months to perfect. The difficultly he had was that none of the existing Globemakers were producing anything close to perfect globes. Latitude lines that don’t match seemed to be the norm. There are makers many a Dictator would be proud of, who overlap gores to the extent that they wipe out entire countries. There are even some (well-known) commercial makers who in order to prevent the paper ridging cut out little triangles down the edge of the gores. Who was responsible for allowing that to happen? Some makers even have latitude lines that look like they have been drawn with a ruler after the map has been pasted on they are so straight. There just seemed little point in spending two years researching a project only to produce a poor quality finish.

In the past few years, Bellerby & Co’s globes have been used in Hollywood movies and for TV productions worldwide. We have also been able to work with several renowned artists, but more importantly, our globes are enjoyed by many customers around the world.

Peter now has a small team of highly trained Globemakers, painters, woodworkers, and cartographers, all leaders in their field. Together they create the handmade globes that Bellerby & Co. has come to be recognized for. It is born from a belief that we never compromise. From the wooden and metal bases to the artwork, the painting, and map-making, each piece is expertly crafted using traditional and modern globe-making techniques, and is lovingly produced in their North London studio; each piece is an individual model of style and grandeur and their globes are works of art in their own right. Even better artwork you can interact with.

Access to this online experience is free for Atlas Obscura Members. Unlock more wonder by becoming a member today!

Once registered, you can access the Zoom room for this experience through your confirmation email or Eventbrite account. Atlas Obscura online experiences are recommended for attendees age 13+

We provide closed captioning for all of our online Member Experiences, as well as transcripts upon request. Please reach out to us at membership@atlasobscura.com if you have any questions, requests, or access needs.

This event is one of Atlas Obscura’s Membership Experiences. At Atlas Obscura, our mission has always been to inspire wonder and curiosity about the incredible world we all share. Now, more than ever, there’s a need to stay connected—not only to our sense of wonder, but to each other.

We encourage you to follow and share the hashtag #AOExperiences for more incredible online experiences and courses with Atlas Obscura and our friends. And check out AtlasObscura.com, the definitive guide to the world’s hidden wonders, to keep virtually exploring the world through the website’s atlas of amazing places, unique stories, and videos.

Dates and Availability
Atlas Obscura Members get free access to this and other exciting online experiences!
Become a Member
Already a member? Sign in to continue
More Online Experiences
Online Course

Think Like A Museum: Curate Your Personal Collection with Alexis Hyde

Starts Tue, May 31
4 Sessions
$215 per person
+ 1 other date
Members Only
Online Experience

Monster of the Month w/ Colin Dickey: The Golem

Handcrafted Cartography: Inside a Globemaker’s Studio

A Lockpicking Practicum With Schuyler Towne