When you think about Illinois, what are the first things that come to mind? Maybe it's the environment, with its vast prairies and cold winters. Maybe it's someone from the state, like Abraham Lincoln, or something, like Chicago-style hot dogs or deep dish pizza. What you might not realize, though, is that there's a lot of fascinating science happening in Illinois. (There was even a settlement named Science along the Illinois River in the early 19th century.)

From some of the world's most powerful computers and particle-smashers to horological oddities, these are a few of the laboratories and collections that the 21st state has to offer.

As the pandemic continues, we hope this virtual trip helps you explore America’s wonders. If you do choose to venture out, please follow all guidelines, maintain social distance, and wear a mask. 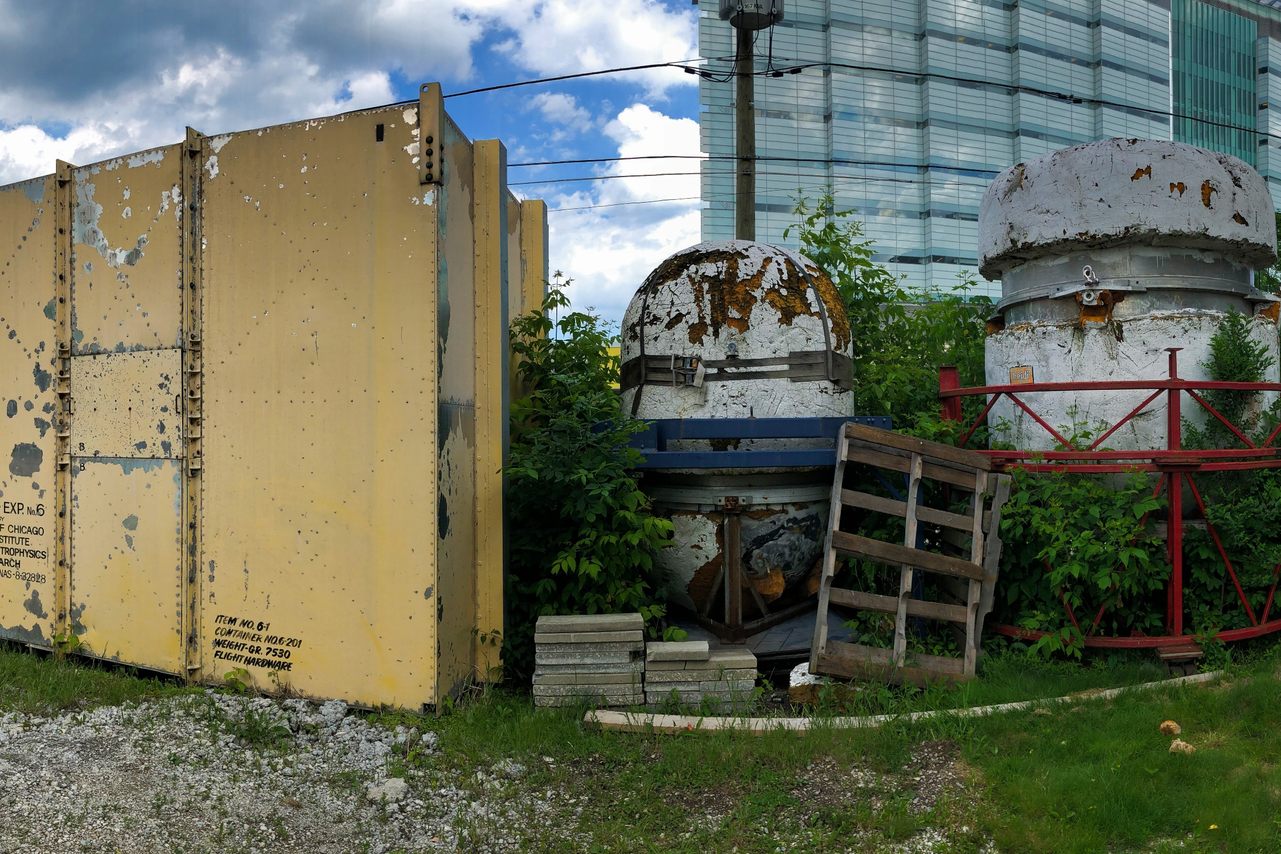 Though they look a little worse for the wear, these pieces of equipment helped expand our understanding of the Universe. sugarbomb (Atlas Obscura User)
Space Relics

Tucked away in a corner of the University of Chicago’s campus lie little-known relics of NASA’s space exploration efforts. Two large round objects and a storage container—all looking like they’ve seen better days—sit in tribute to University of Chicago astrophysicists’ study of cosmic rays. Inside the storage container are the remains of a piece of equipment nicknamed the “Chicago Egg,” a 2.5-ton, 12-foot tall cosmic ray detector that flew on the Space Shuttle Challenger in 1985. After the tragic Challenger explosion the following year and the subsequent grounding of the shuttle fleet, researchers switched to high-altitude balloons to bring their cosmic ray detectors to the edge of space. The two battered white objects are from these later balloon-borne missions. (Read more.)

One of the largest pieces of scientific equipment ever carried on a NASA space shuttle sits in a Chicago alley.
See More 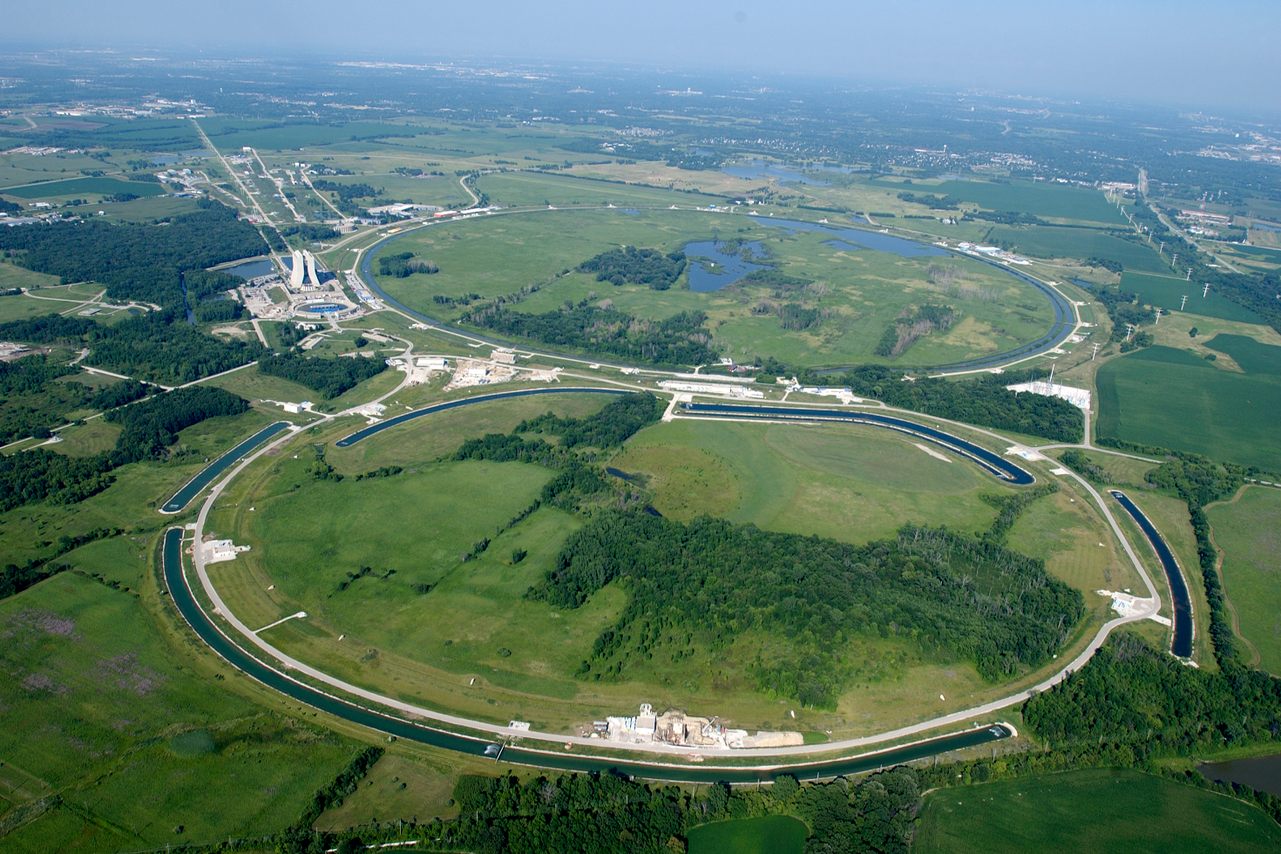 Since it first opened in 1967, the Fermi National Accelerator Laboratory has been asking big questions: What are we made of? How did the Universe begin? The scientific facility outside of Batavia specializes in particle physics. For decades, Fermilab boasted the world’s most powerful particle accelerator, known as the Tevatron. It was completed in 1983 and operated until 2011, a few years after CERN’s Large Hadron Collider began operating. Work is currently underway on an expansion of Fermilab’s particle accelerator complex that will allow scientists to better study neutrinos.

In addition to the particle physics laboratory, Fermilab is home to a prairie ecosystem restoration project and a small herd of bison. The grounds are open to visitors, and frequently host cultural events including musical concerts, folk dancing, and art exhibitions. (Read more.) 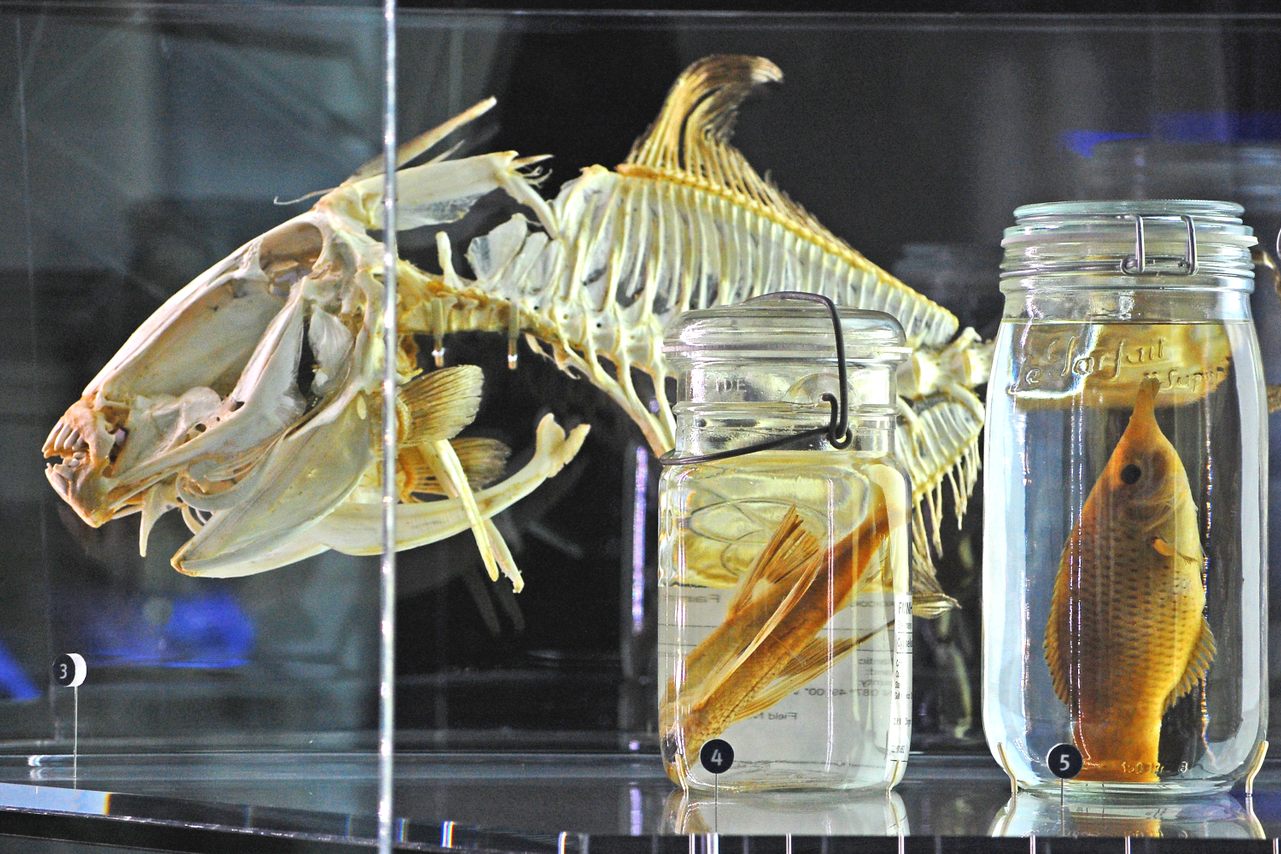 While the physicists at Fermilab are trying to figure out what we’re made of on a quantum level, biologists at the Field Museum are studying what we’re made of genetically. The museum's DNA Discovery Center is both a permanent exhibition and active research laboratory. Scientists at the Pritzker Laboratory are studying and analyzing the genetic codes of thousands of species to map out the connections between all living things on Earth. Visitors get a chance to see DNA research in action and even ask scientists about their work. (Read more.) 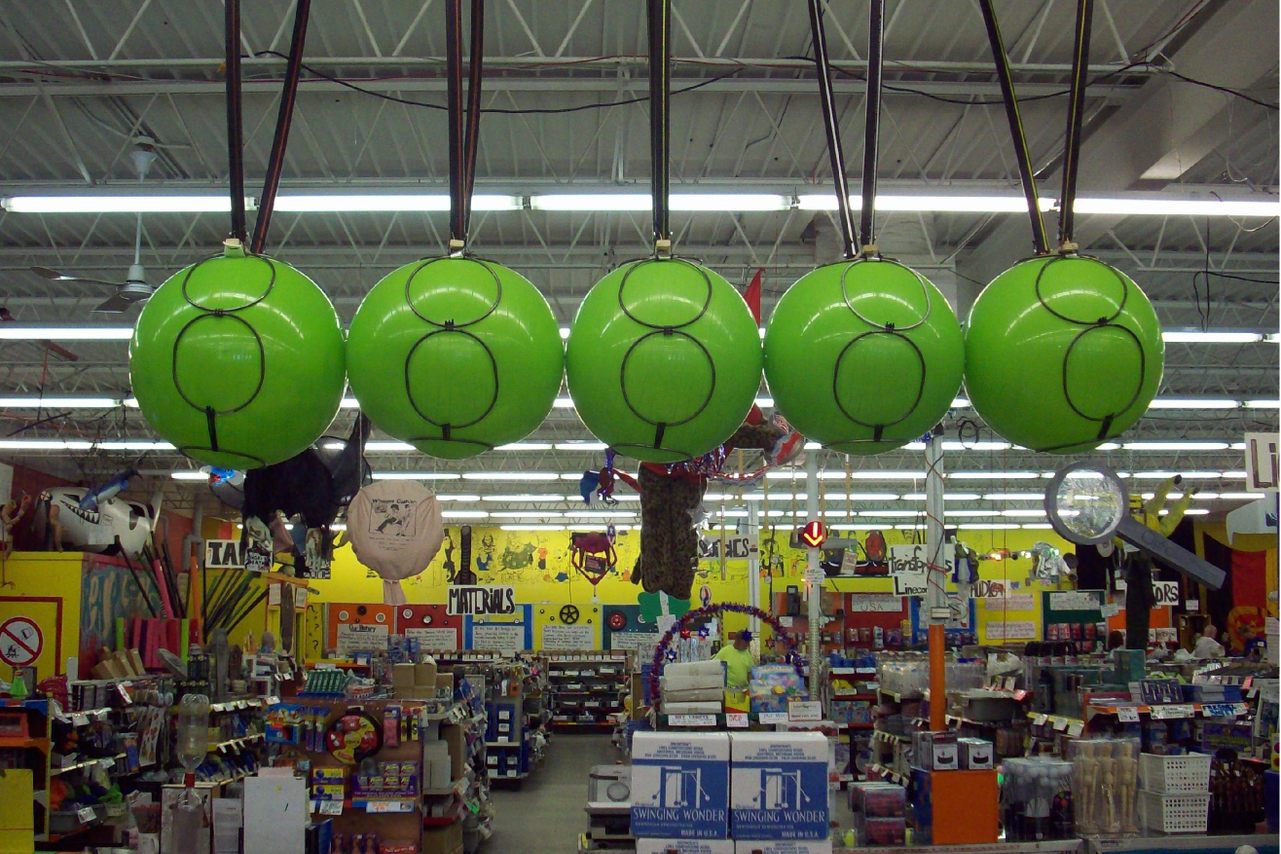 In 1937, Al Luebbers noticed that a factory near where he worked was throwing away optical lenses. Al got permission to haul them off, and he took them home, where he and his wife cleaned them up and sold them through a mail-order ad in Popular Science. That was the start of American Science & Surplus (known then as American Lens & Photo). After the end of World War II, military surplus helped the Leubbers’ business grow, and eventually the couple opened a brick and mortar store. Over the following decades, the store would undergo several name changes, new ownership, and expansion into new locations. But through it all, the shop has offered a unique mix of educational, industrial, and military items. (Read more.) 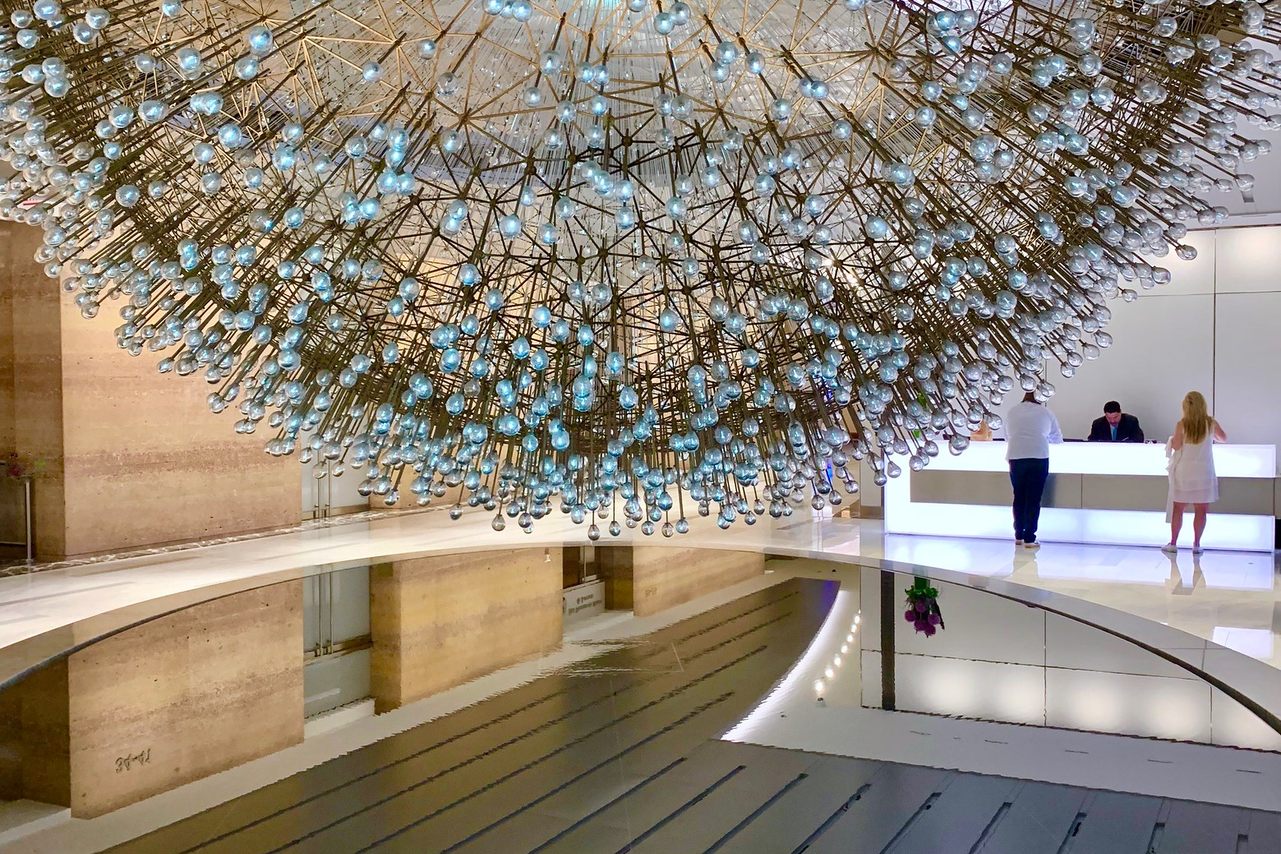 The stellar sculpture hangs between a mirrored ceiling and a reflecting pool, seemingly stretching on forever. Steve Jurvetson/CC BY 2.0
Star Map

A dazzling display of lights make up this sculpture that hangs in the lobby of the skyscraper at 875 North Michigan Avenue in Chicago, formerly called the John Hancock Center. Lucent was created by the English artist Wolfgang Buttress. It contains 3,115 glass bulbs, each hand-blown by artists from a local studio. Fiber-optic cables inside each bulb provide light that makes the 13-foot orb twinkle.

The piece is more than just a pretty sculpture—Buttress designed Lucent with help from the astrophysicist Daniel Baylissis. It represents a three-dimensional map of every star visible to the naked eye in Earth’s northern hemisphere. (Read more.)

A shining sculpture made of 3,115 lights, the number of visible stars in the Northern Hemisphere.
See More 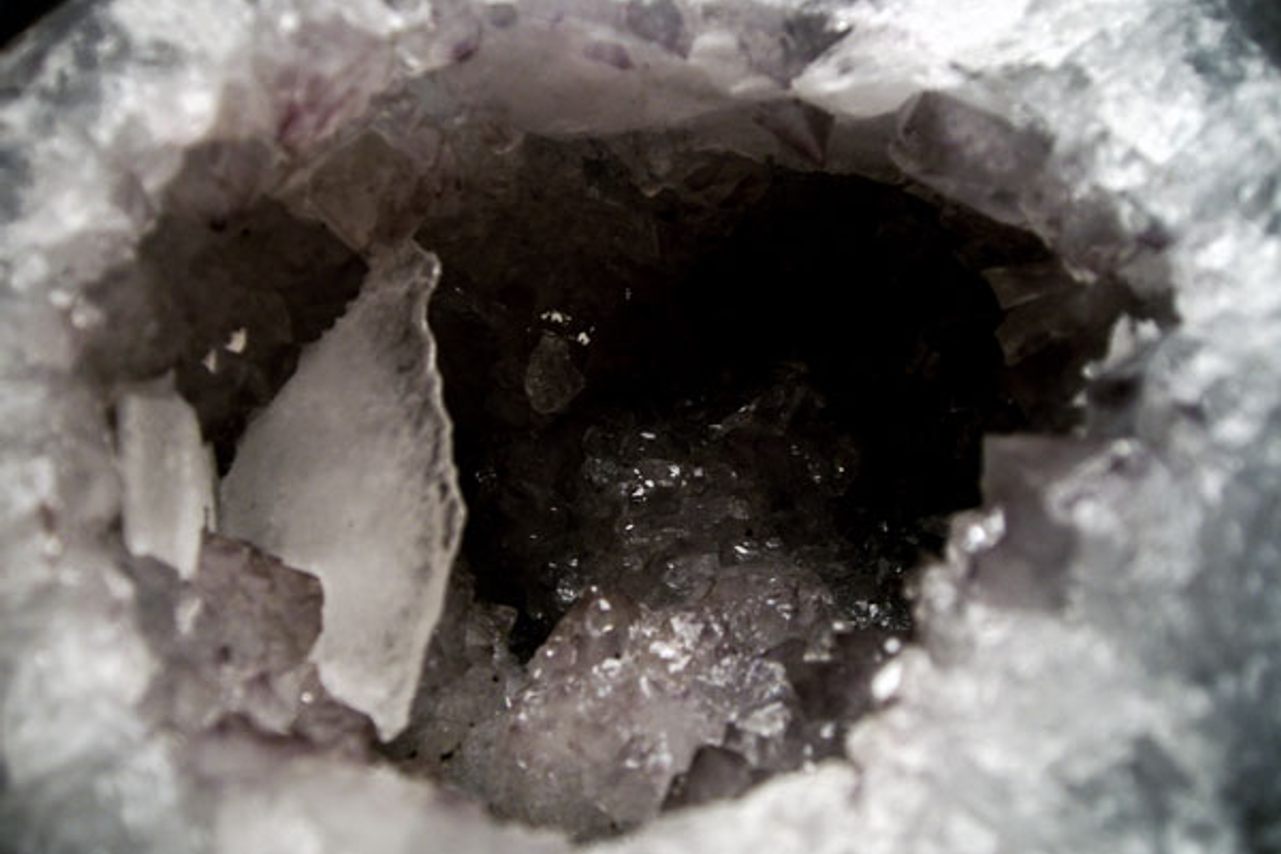 The collection includes amethyst, calcite, and more. Kelley/CC by 2.0
Museum

Isaac Funk arrived in Illinois in 1824. Over the decades that followed, he and his family built a sprawling agricultural empire. After Isaac’s death, his son LaFayette took over management of the farmland and served as a state legislator and senator. With the founding of the Funk Brothers Seed Company in 1901, the family expanded beyond Illinois. As work with the seed business sent the family afield, Isaac's great-grandson Lafayette Funk II became fascinated by gems and minerals.

He began collecting specimens from around the world, and eventually amassed a diverse collection of minerals, gems, and fossils. Today, visitors can learn about the Funk family and see Lafayette Funk II’s collection at the Funk Prairie Home Museum in Shirley, Illinois. The museum, which opened in 1975, bills itself as the largest one-man mineral collection in the world. (Read more.)

Eclectic collection of rare and beautiful stones in an historic home.
See More 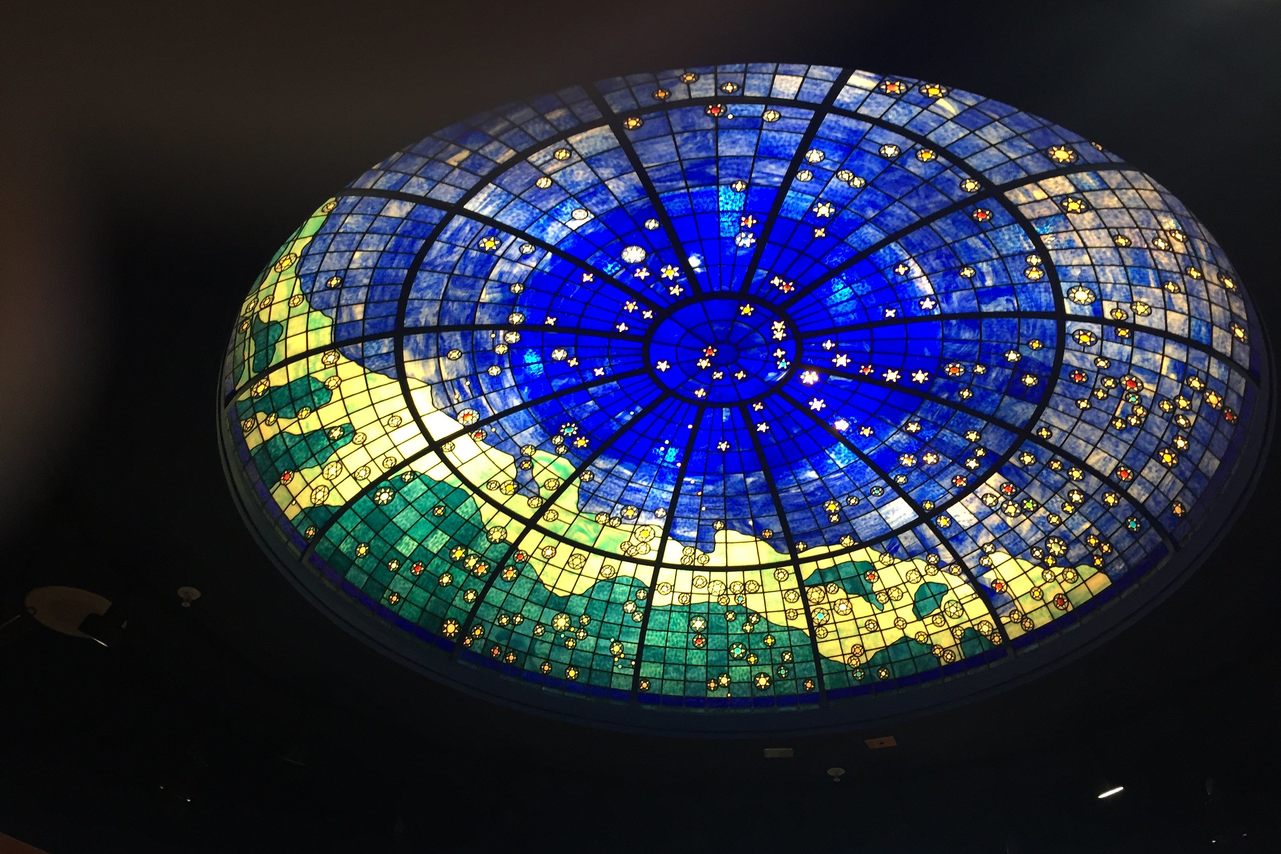 One of the museum's most impressive pieces is "Zodiac," a large, stained glass dome made by John J. Kinsella Co. Howard Lifshitz/CC BY 2.0
Museum

When Cameel Halim came to the United States from Egypt in the 1960s, he was awed by some of the churches he saw—especially their magnificent stained glass windows. Halim began collecting discarded window panes from demolished buildings. The pieces joined his collection of historic clocks and watches, which had fascinated him since childhood.

In 2017, Halim opened this five-story museum, which houses more than 11,000 objects from around the world. Four of the museum’s galleries showcase Halim’s exquisite stained glass collection, from an $85,000 Louis Comfort Tiffany window portraying Saint John the Divine to glassworks forged by Tiffany’s rival studio, John La Farge. The museum also holds eight rooms dedicated to displaying clocks and watches, some of which are hundreds of years old. (Read more.)

The first and only museum dedicated to stained glass and horology opened outside of Chicago in 2017.
See More 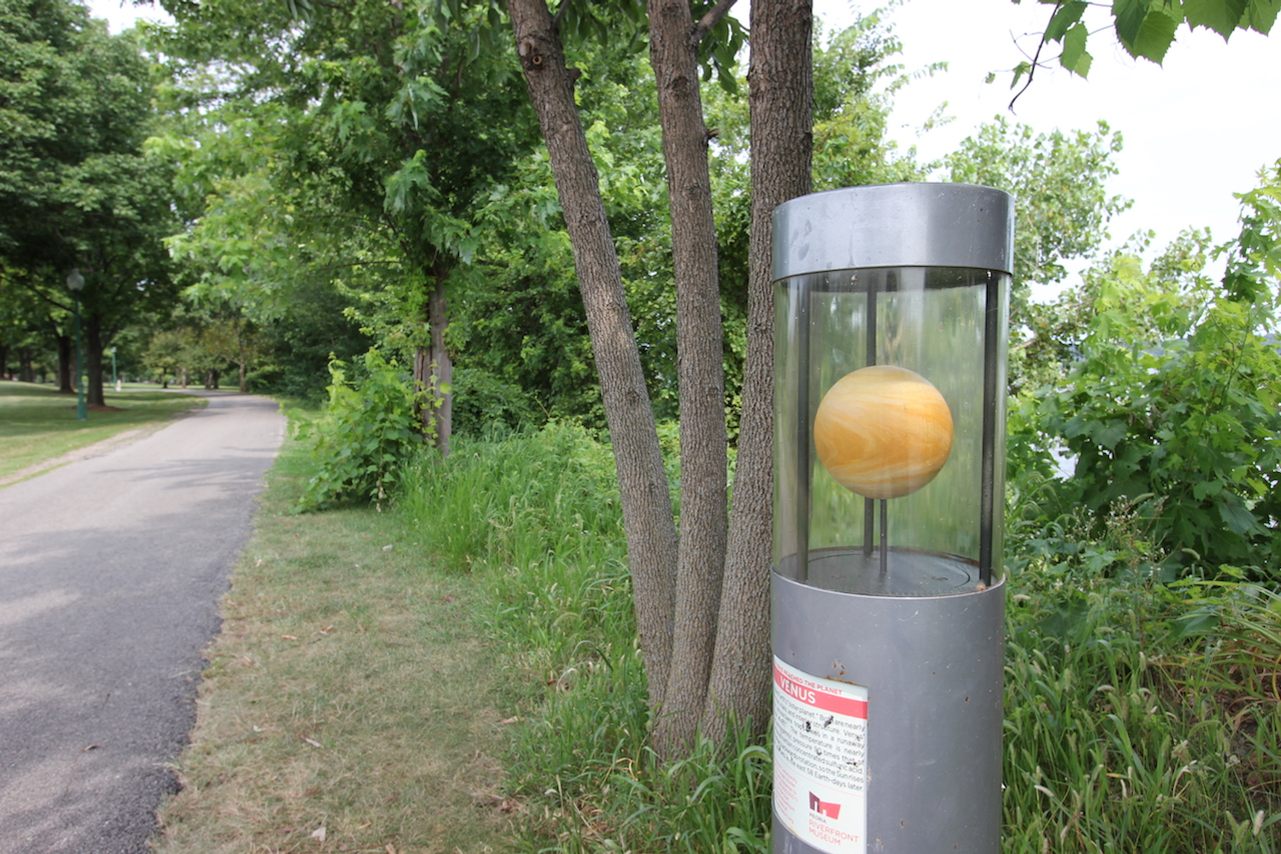 The system's scale model of Venus can be found about 0.68 miles from the museum along the Rock Island/Pimiteoui Trail. Courtsey Peoria Riverfront Museum
Space Exploration

In Central Illinois, the solar system covers 6,000 square miles. Peoria is home to the world's third-largest scale model of the solar system. At the city’s Riverfront Museum, a 46-foot circular plaza paved with red and yellow stones representing the Sun. The rest of the solar system stretches out from there, from a two-inch-tall Mercury located a third of a mile down the riverfront trail all the way to a one-inch model of the dwarf planet Pluto, which is located in a furniture store 40 miles from the museum. (Read more.)

The world's third-largest scale model of the planets.
See More 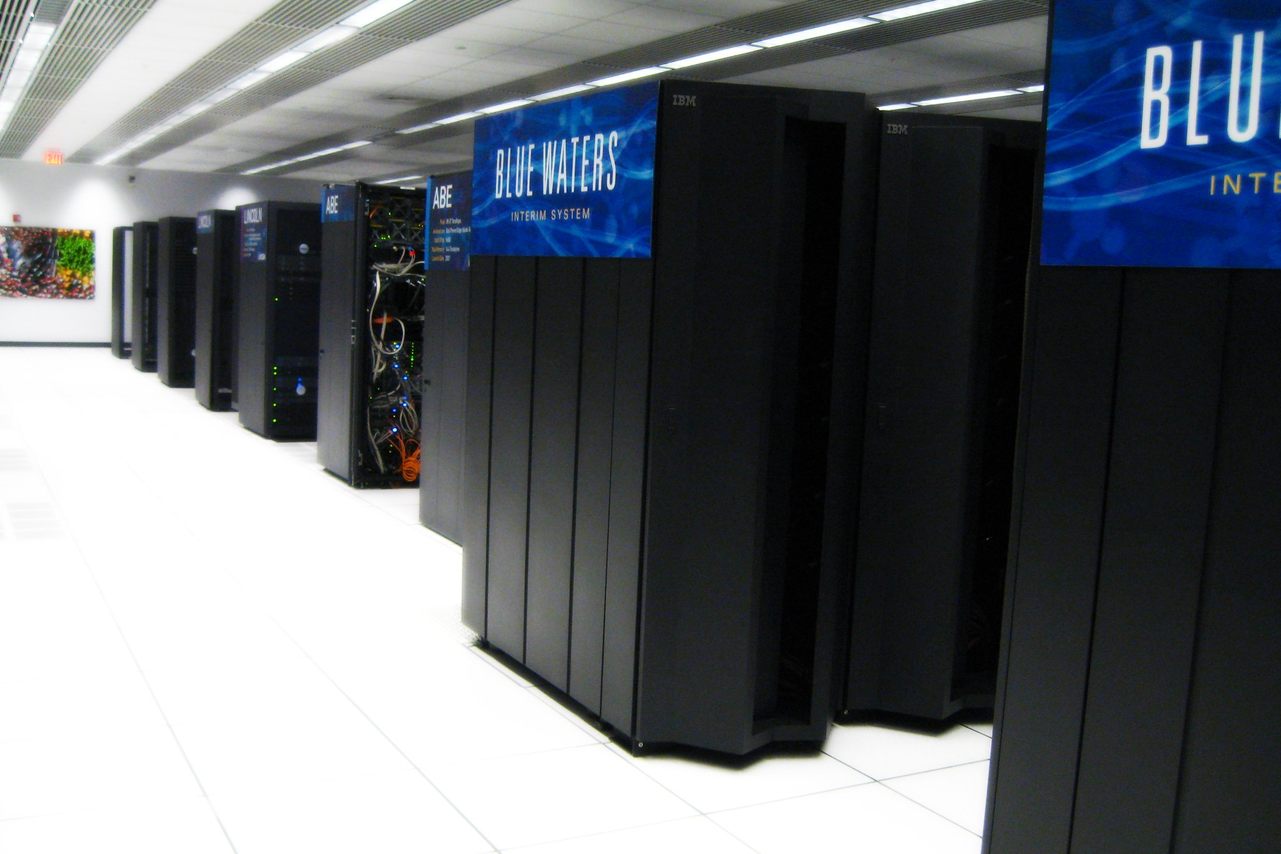 The Blue Waters Supercomputer is housed in a large climate-controlled room on campus. kosheahan/CC BY 2.0
Computing

The Blue Waters Supercomputer is capable of performing more than 13 quadrillion calculations in a single second—that's about three million times faster than a standard laptop. The supercomputer lives in 300 tall black cabinets in a 20,000-square-foot room at the University of Illinois at Urbana-Champaign. Since it began operating in 2013, scientists and engineers have put the massive processing power of Blue Waters to use for all kinds of research, from improving satellite coverage to predicting crop yields to understanding evolutionary development. Though operating a computer of this scale takes a lot of electricity, the facility was designed with sustainability in mind: For most of the year, the facility's cooling towers can rely on naturally chilled water. (Read more.)

One of the most powerful computers in the world can be visited by anyone who wants to experience more computing than they can handle.
See More
Photo Credits: Lenore Edman/CC BY 2.0 (Fermilab's bubble chamber, a device used to detect and study subatomic particles, looks like it's straight out of science fiction.) , Mike Steele/CC BY 2.0 (Fermilab)