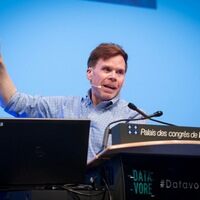 Featured in Wired, Mashable, TechCrunch, the Wall Street Journal, and Businessweek. Interviewed by NPR, the BBC, and Fox News. Purveyor of TED talks. Subject of TED talks. And now headlined by Showtime’s Dark Net. Chris Dancy is touted as “the Most Connected Man on Earth,” and the world is watching those connections carefully. For 25 years, Dancy has served in leadership within the technology and healthcare industries, specializing in the intersection of the two. Chris entered the public dialog concerning digital health as the media started to focus on wearable technology. He earned his moniker by utilizing up to 700 sensors, devices, applications, and services to track, analyze, and optimize his life--from his calorie intake to his spiritual well-being. This quantification enables him to see the connections of otherwise invisible data, resulting in dramatic upgrades to his health, productivity, and quality of life.
http://www.chrisdancy.com

This homeless brass fox tugs at your heartstrings from the foot of a Stockholm bridge.
59.3256, 18.0961
Added by ceciliao
Copenhagen, Denmark

The de facto symbol of Copenhagen is this bronze fairytale which cannot seem to keep its head for very long.
55.6929, 12.5992
Added by Alexander
Copenhagen, Denmark

Construction of Barcelona's iconic (but controversial) church is expected to be completed in 2026—a century after the death of its architect.
41.4036, 2.1744

A vista of the city and sea from atop the little-known viewing deck on an unassuming Columbus statue.
41.3758, 2.1777
Added by captnsusan
Barcelona, Spain

An overlooked marble is the only surviving in-place 18th century example of the measurement that changed how we define distance.
48.8493, 2.3355