18 Obscure Sports That Are Well Worth Rooting For - Atlas Obscura
Want to see fewer ads? Become a Member. 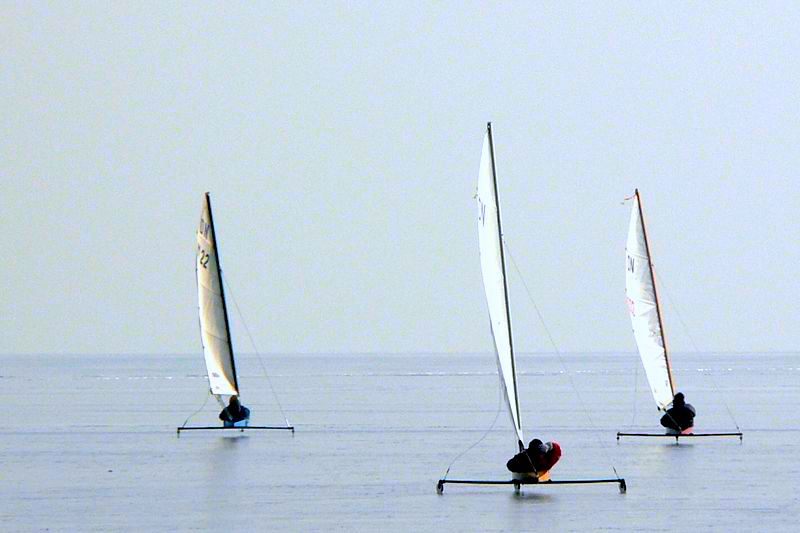 Anyone up for an ice yachting race? Ferkovax/CC BY-SA 3.0

From the hockey variant known as Broomball to the wild and often difficult-to-comprehend sport of Kabbadi, the world has no shortage of lesser-known yet entirely worthy athletic pursuits. Plus, such sports can offer a key window into the culture of the people who play them. We recently asked Atlas Obscura readers over in our Community Forums to tell us about their favorite esoteric sports, and we got some winning responses.

Check out a selection of some of the best submissions below. If you know about a fascinating sport that didn’t make the list, tell us about it over in the forums and keep the conversation going. GOOOOOAAAAAALLLLLL!!!

“Sipà is a game played with the foot—kicking a ball made from a variety of many different possible materials: a ball made with rubber bands, a bean bag, a rattan ball, a ball with feathers, or a washer with a plastic pom-pom. It takes a lot of coordination and a good sense of balance. It is also related to Sepak Takraw.” — AnyaPH

“Have to agree that takraw as one of the most intense, amazing games I have ever seen. I was traveling on business in Bangkok and saw a few neighborhood guys playing on a rooftop court. The agility and athleticism they displayed was unbelievable. Like watching volleyball being played with only your feet. Must see!” — marcdshapiro

“Hockey wasn’t awkward enough, so some (Canadian?) genius invented Broomball. It’s essentially hockey. But instead of a puck, it’s a ball. And instead of a hockey stick, you use a broom. And instead of wearing skates, you run around on ice in street shoes. I used to know people who played it wearing clown outfits, but can’t find a picture. So instead, here’s a team of firefighters playing against a team of roller derbyers.” — tralfamadore

“A friend from Limburg told me about the sport of ‘Gaffelhangen,’ which is a very local rural sport that is only done in a small part of the province. It is basically a competition to see which can hang on a pitchfork for the longest. They call the competition a European championship, even if it’s just locals.” — CoolCrab

“Crud—invented in Canada, played in Air Force messes around the world. All you need is an old pool table, two teams and lots of beer!” — domalley

“How about Underwater Rugby. I played for several years.” — Beta

“While semi-lost in the Guanacaste Mountains somewhere between Montenegro and Herradura, Costa Rica, the bus my friends and I were on made an unscheduled stop at a plaza the size of half a football field, where five or six small houses faced each other in a semi-circle.

Soon after we arrived some of the guests mounted horses. A ladder was brought to the middle of the plaza. On what I assumed had been a communal clothesline that stretched the width of the plaza, people climbed the ladder and hung small steel rings from ribbons. I can’t remember the exact process, but I believe there were three rings hung for each rider with smaller and smaller circumferences, the largest being no more than a half an inch or so.

Each rider had a small, carved lance that they would hold palm up and charge at the ring. I remember being astounded at the skill and accuracy required to snatch a ring, like the Tico version of catching a housefly midair with chopsticks. I also remember, being a North American kid from a working class family, just out of high school, the whole otherworldyness of it all. Being there through pure chance and experiencing what to me was an absolute spectacle encapsulated everything I imagined travel could be. I had walked out of the everyday and in to one of the National Geographics I had poured over month after month for time immemorial.

It was the first time I had left my country and visited another.” — SluggoSmith

“Pallone col bracciale has been played in Northwestern Italy since the Renaissance. The rules are basically similar to tennis but played over much longer distances, with the players using spiked wooden gauntlet/clubs to hit a heavy ball back and forth.” — tony_wolf

“Well, it’s obscure in the U.S., but very popular in Asia—dragon boating! It’s a 2,000 year-old Chinese sport. I’ve been part of a team for around five years. It’s more popular on the West Coast of the U.S. and in Canada.” — bumblebarb

Popular in: Canada and North America

“The Inuit One-Foot High Kick requires incredible strength, control, and precision. The goal is to kick a suspended ball with one foot while in the air and then land on that same foot. It’s considered the most difficult of the Inuit games.” — Tboullard

“Colorado’s State Summer Heritage Sport: Pack burro racing. The burros aren’t ridden. They are carrying some equipment, but racers run next to the burro for the entire distance. We even have a triple crown which includes the 29-mile race from Fairplay to the top of Mosquito Pass (13,190 feet) from the east side. The Fairplay race is followed the next week by the 22-mile Leadville race which races to the top of the same pass from the west side. The third leg of the triple crown is the short 12-mile Buena Vista race.” — cyccommute

“Kabbadi! I invite you to watch a game with the sound off, and try to figure out what the rules are.” — Josh

“Invented in Toronto, Canada (of course!) by Darrin Bedford, it’s a summer hockey game played on unicycles on pavement with a special puck that’s dunked in a flammable fluid and set on fire just before play (the flame makes a nice blue flame line as you hit it to start the game). Regular ice hockey rules apply—sticks down, etc. We played this game at NAUCC some years ago, and it’s crazy fun on a unicycle!” — sinclairpam

“In South Africa they play a sport called Jukskei. Jukskei is a 270-year-old folk sport, believed to have originated around 1743 in the Cape of Good Hope, South Africa. It was developed by ‘transport riders’ who traveled with ox-drawn wagons. They used the wooden pins of the yokes (Afrikaans: skei) of the oxen to throw at a stick that was planted into the ground. The game was also played during the Great Trek. It was also played by the farmers from the Boland on beaches. Jukskei became an organized sport around the year 1939, when the first unions were established and rules were formalized.” — laura10

“Up here in Vermont (and more recently in New Hampshire and upstate New York) a few of us compete in primitive biathlon. You might know about Olympic biathlon—people in spandex on skinny skis with precision .22 rifles skiing and shooting. Like that, only with wooden snowshoes and muzzleloading rifles, 18th/19th century style. There are three events in Vermont and a couple each in upstate New York and New Hampshire. The courses are generally one-and-a-half to two miles, with nine steel gong targets of all sizes and shapes spread out along the course. Each hit takes five minutes off your running time. The challenges are that 1) moving at any decent speed on snowshoes makes your pulse and breathing skyrocket, so holding still is hard, and 2) keeping an old style firearm working in sub-freezing temperatures is an issue. Some people dress the part, and others for cold weather survival. There’s a festive atmosphere; very few people are deadly serious about it. People encourage each other and help each other out.” — hiltonian

A Rocket Treated Florida to a Light Show at Dawn

8 Extremely Local Mascots That Are Worth Cheering For

The more obscure, the better.
machines