To Build an 18th-Century Ship, Shipwrights Had to Remaster a Lost Craft - Atlas Obscura
Want to see fewer ads? Become a Member. 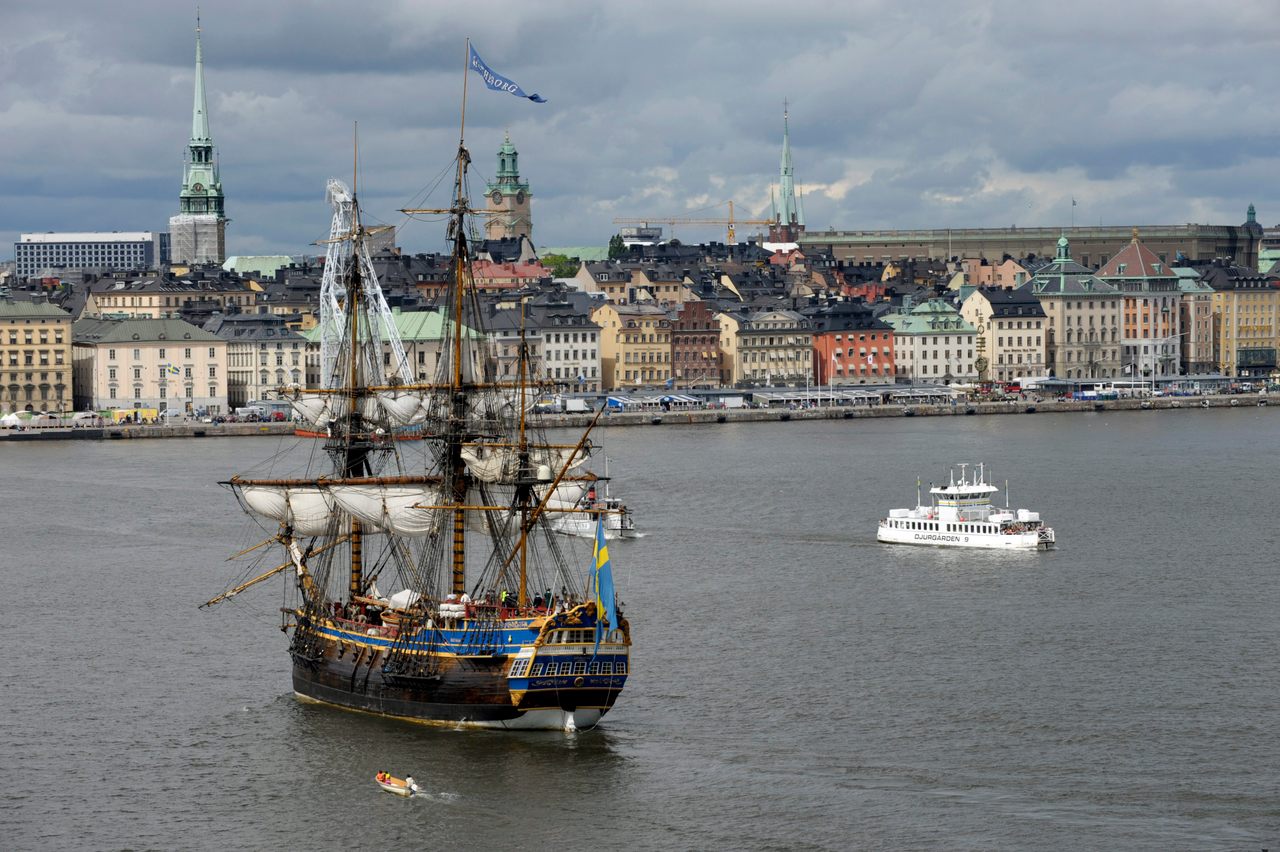 The recreated Götheborg sailed into Stockholm as part of the celebration around Crown Princess Victoria and Daniel Westling's wedding on June 19, 2010. AFP/Staff/Getty Images
In This Story
Destination Guide

In 1745, Götheborg, one of the largest ships in the Swedish East India Company’s fleet, was making its way home from China, laden with green tea, spices, silks, and tons of glistening porcelain. Having rounded the treacherous Cape of Good Hope and braved the open Atlantic, the ship was finally reaching the end of a grueling, 30-month journey. Then, right outside the harbor of Gothenburg, just miles from its destination, disaster. The ship struck a submerged rock in the Göta älv river. It lifted the 200-foot-long, treasure-laden ship several feet out of the water, and within minutes, five feet of water poured into its hull. A desperate crew managed to salvage much of the precious cargo, but not all of it, and Götheborg would never sail again. For centuries, the wreck sat, undisturbed, on the riverbed until December 9, 1984, when a team of divers began the first excavation of the site.

The project continued for two years. There wasn’t a whole lot left, says Joakim Severinson, a diver on the team. “It wasn’t like a whole complete ship standing on the seabed.” All that remained of Götheborg were “just scattered parts.” The excavation was still able to uncover eight tons of porcelain shards (currently on view at Maritime Museum in Gothenburg) and a two-foot layer of green tea.

“When you are diving and searching through the seabed for artifacts from the 18th century, you start to wonder how it was to sail in those days,” says Severinson. “When the excavation was ending, I started to think, “Why not build it again and build it so you can sail with it to modern standards to China and back again?’” Severinson later became the master shipwright for that very project—an exact replica of the original, built with the help of the Swedish government, the city of Gothenburg, and many local companies. After 11 years and $40 million, a new version of Götheborg was finally completed in 2005. Today it’s one of the largest wooden ships sailing, and in April 2022 the ship will retrace its final voyage for the second time.

“The whole idea with this ship was to build it as close to the original ship as possible,” says Severinson. The techniques used to build it were the ones used in the early 1700s. From hemp rope to hand-sewn linen sails, Götheborg was an experiment in construction time travel. When asked what the hardest part of the build was, Severinson laughs: “Almost everything!”

“In Sweden, we haven’t built a ship this size since the mid-19th century in wood,” he says, and that meant relearning many “different methods for building the ship, like steaming the planks.” Steam boxes were “high tech in the 18th century,” says Severinson, and allowed ships to be built twice as quickly. As the name suggests, a steam box is a huge wooden box filled with steam. Inside, the steam would “soften the glue between the fibers in the wood,” Severinson says, allowing it to be bent or curved—picture the hull of a ship—while maintaining or even increasing its strength. Severinson already knew about steam box mechanics before construction began in 1995. He had learned the skill after “participat[ing] in many investigations of old ships, both on land and in water” and “spend[ing] a lot of time studying old shipbuilding techniques.” Today, steam is still used to shape wood, but the art of doing it in a 40-foot box to shape a hull hasn’t been practiced for centuries.

The crucial first step was finding the right trees. The team considered each tree’s height, diameter, and curvature. “We actually got out in the trees with a mold and put the mold on the tree and said, ‘Yah, this will work,’” says Severinson, who traveled across Sweden, Germany, and Denmark to find the right candidates. Marine archaeologist Wendy Van Duivenvoorde from Australia’s Flinders University, author of Dutch East India Company Shipbuilding, says she always spares a thought for the trees that would’ve been used in shipbuilding’s heyday. “They were big oaks that had grown for hundreds of years when they were cut to facilitate the building of these ships. Just the environmental damage we have done as a human species in cutting these big beautiful trees down.”

Once the trees finally made it to the Gothenburg workshop, it was time to start bending. The thickness of each plank determined how many hours it would need to spend in the box. “So, for a four-inch plank, it’s four hours,” Severinson says. In the 1700s, the steam would’ve come from a giant pot of water boiling over an open flame. The crew of the new Götheborg, however, used what was essentially a massive electric kettle.

After the plank was sufficiently steamed, the team only had 15 or 20 minutes to shape it, and even less on a chilly Scandinavian winter day. Armed with gloves and massive, three-foot-long, 65-pound clamps, they’d mechanically lift and slowly bend each plank into a predetermined shape to form the hull and other parts of the ship. A team of eight could bend one or two planks a day, says Severinson. When asked how many planks went into the ship, Severinson erupts in laughter. “I don’t know! Many hundreds.”

The trickiest parts to bend were the specially curved planks at the stern of the ship. “If there’s a fault in the wood that you didn’t see, it cracks and then you have to make a new one,” says Severinson. Days when planks cracked or splintered were sad ones, he says. The whole process—just steaming and shaping wood—took more than two years, nearly a fifth of the whole ship’s construction time.

Before the advent of steam boxes in the 18th century, shipbuilders bent planks by heating them over an open fire, says Van Duivenvoorde. It was a very labor-intensive and time-consuming process, she says. Burning hay and straw, shipbuilders “would heat spots within the timber around growth aberrations and knots” and then slowly, bit by bit, start to bend the plank. The whole process took 10 to 12 hours and, “you can’t walk away from it once you start,” says Van Duivenvoorde. “Of course, we have a different concept of time nowadays than they would’ve had in the 18th century,” when no one would have batted an eye at a 12-hour shift with no breaks. The steam box completely changed the game. “You can steam much larger sections in one go,” says Van Duivenvoorde, while “maintaining moisture within your plank.” It sparked a shipbuilding revolution.

The lost art of steam boxes wasn’t the only skill the team had to remaster. There’s also the dramatic process of heating and cooling iron rings for the masts (the ship has three). There was tarring the hemp fiber ropes and making the historically accurate linen sails. There was also recreating the tools needed, such as the three-foot-long clamps. The final replica is enormous—147 feet out of the water, 36 feet wide, 192 feet long. Now that it’s seaworthy, the ship can reach a top speed of 11 knots, or 12 miles per hour. It can now be seen and toured in Gothenburg.

Between 2005 and 2007, Götheborg made its initial voyage to Shanghai, stopping in Cape Town, Jakarta, Singapore, Perth, and other international harbors along the way. Since then, Götheborg has made several European tours. But it was recently announced that in April 2022, the ship will once again head around the world— following almost the exact same route as the original had 300 years ago, from Gothenburg to Shanghai and back. This tour is a move to strengthen trade ties between Asia* and Sweden, a way “to market Sweden and Swedish companies,” says Severinson.

Severinson, for one, is excited about the upcoming voyage. “It’s built for sailing, and it’s preserved best by sailing,” he says. On that first voyage, between 2005 and 2007, “I sailed with the ship from South Africa to Australia. It was the leg that was most like sailing in the 18th century … big waves, strong winds, and nothing, absolutely nothing. No islands. No planes. No nothing. Just us and the sea.” When they finally docked in Perth, Van Duivenvoorde had the chance to see the ship up close. “I was very impressed by it,” she says. “Of the reconstructions, it’s one of the more historically accurate ones.”

It’s not uncommon for people to have a strong reaction when they see it in person, according to Severinson. “They are just so struck. They’re almost in love.” Soon thousands more will be struck by the sight of it, even if they don’t understand all the cutting-edge, centuries-old technology it took to make it.

* Correction: This story was updated to emphasize that the goal of the voyage is to strengthen ties with Sweden across Asia.

The Triumphs and Tribulations of Towboats on the Mississippi River

“You ride the river and just hope you’re in the right spot when you need to be.”
engineering

This 110-Year-Old Steamboat Is a Floating History Lesson

"Sabino" is the oldest wooden, coal-burning steamboat that still operates in the United States.
engineering

7:29
Want to see fewer ads? Become a Member.
From Around the Web
Atlas Obscura Trips
Rewilding: Tracking Wolves in the Forests of Sweden
View This Trip
Thanks for sharing!