A Sampling of Japan's Eccentric Restaurants - Atlas Obscura
Want to see fewer ads? Become a Member.
In This Story
Place

Drinkslinger is an unlikely vocation for a Buddhist monk, but at this Tokyo bar the enlightenment is served in a martini glass.
Place

The freshest fish here are the ones you catch yourself.
Place

This exacting restaurant will charge a fine for every grain of rice you've left behind.

If you’ve been on the internet for any amount of time, there’s probably been a point where you watched a video of Japan’s zany game shows or cartoons, read about the strange sci-fi like gadgets they’ve invented, or at the very least heard about their automated toilets. While they have more fascinating eye candy than you can swallow, you can also get a taste of strangeness in one of Japan’s many theme restaurants. Here are some of our favorites: 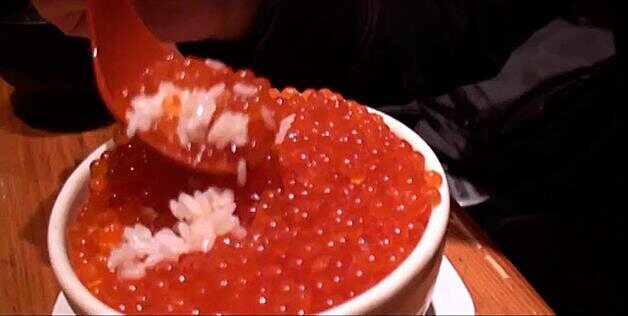 If you’re craving salmon roe by the pound, look no further than Hachikyo, a restaurant that specializes in the brilliant red delicacy known in Japan as tsukko meshi. A big bowl of this salty goodness can be yours at a reasonable price, so long as you follow the rules:

1. Finish all your food, if you don’t, you will be required to pay a fine in the form of a donation to the fishermen who worked to put that food to your table.

2. When the rice is served, you may not disturb the rice in any way, disturbing the rice means no tsukko meshi for you.

3. You must sing along with the staff while they serve your tsukko meshi to you. The songs they sing are authentic sea shanties that fishermen sing.

If you find yourself unable to finish every single bit of your food, you may find comfort knowing that your fine goes to the fishermen who risked their lives to bring you the delicious tsukko meshi on your plate. 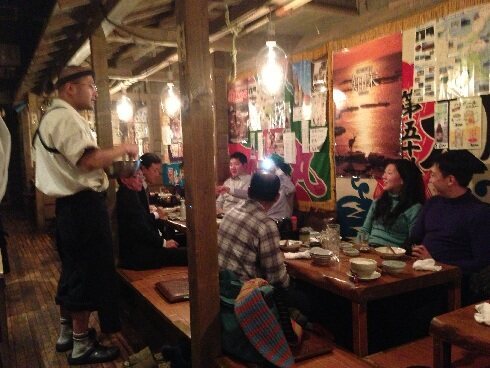 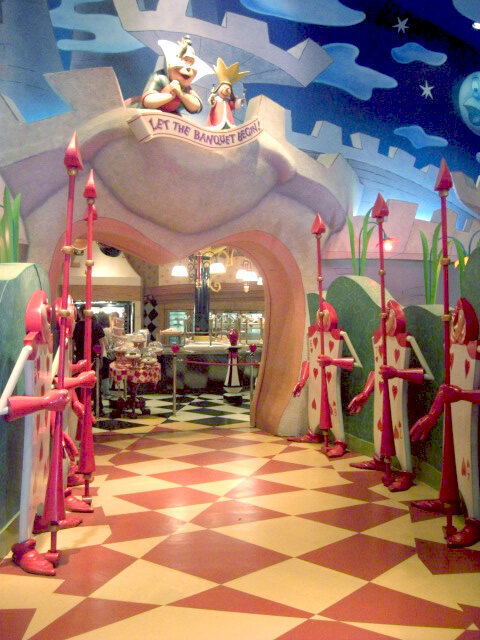 Entering the dining land of Alice (via Tigerdragonslayers)

Named with one of the most elaborate attempts at avoiding Disney copyright lawyers, Fantasy Dining Alice Trapped in a Labyrinth is an Alice in Wonderland-themed restaurant decorated with huge books, royal guards in the form of playing cards, and tables inside of giant tea cups. The menu includes many food items shaped like rabbits and cakes that entice you to “Eat me.” 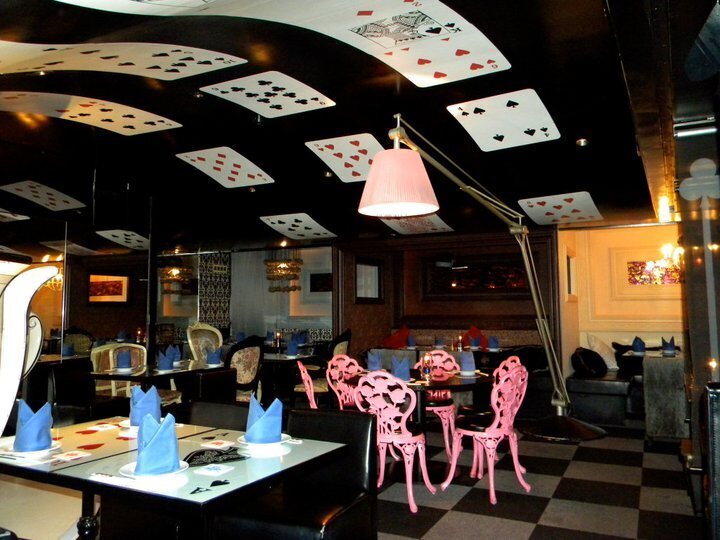 Cards on the ceiling (via user-submitted image) 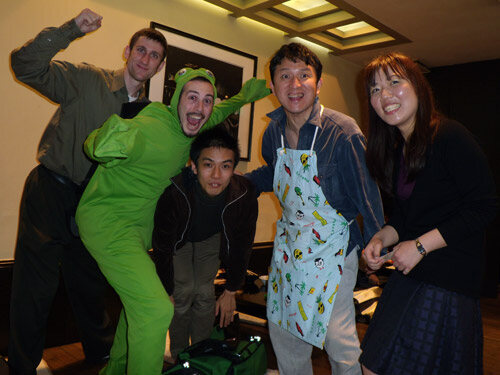 If you want true, down-the-rabbit-hole madness over a few drinks, you need to go to Kagaya. The bartender, Mark Kagaya, is probably one of the most entertaining bartenders you’ll ever meet, but not for the usual reasons that bartenders are entertaining. He doesn’t juggle bottles, and his drinks aren’t anything from the ordinary, but this bartender will serve you in a frog suit, yell and dance at you, then treat you to a puppet show that determines what food you order. Others who have experienced Kagaya have reported leafing through a coloring book of confusing crayon drawings to order food. 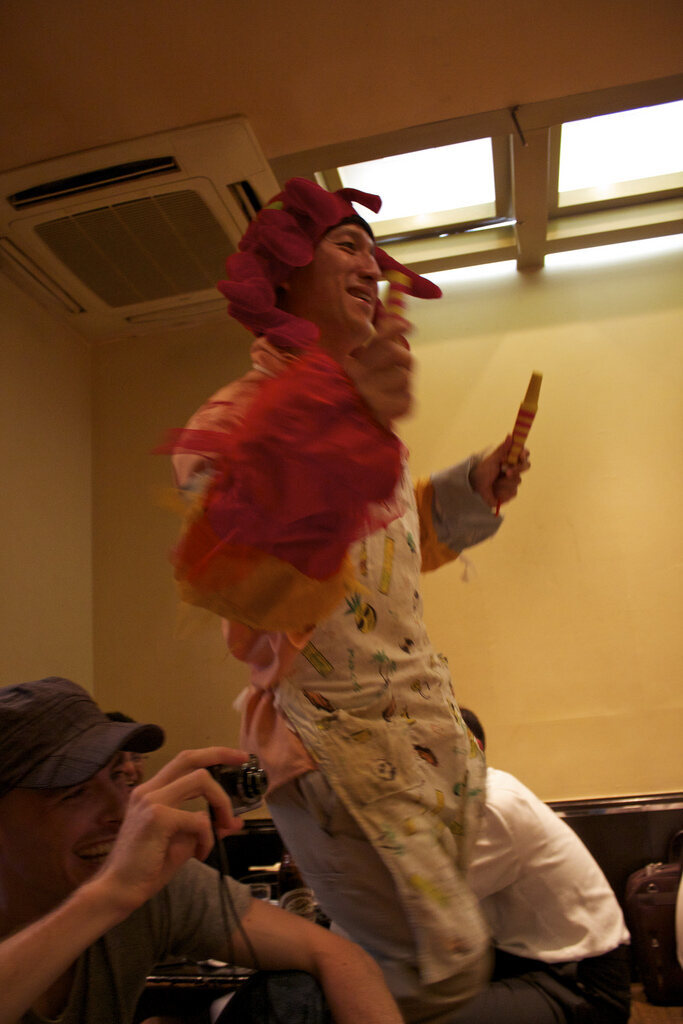 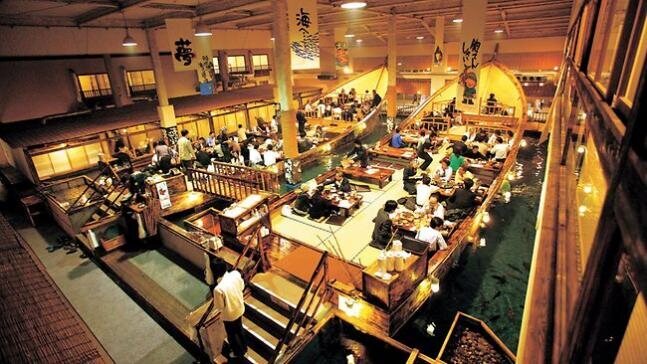 Boat dining in Zauo (via Field and Stream)

Zauo is a popular Japanese restaurant chain that gives you a rod, and encourages you to catch your own meal from the large aquarium that encompasses the dining area, shaped as a giant boat. After you catch a fish, you can choose how it will be prepared, and while simmering, frying, and grilling the fish are available options, the freshest option by far would be to eat it sashimi style. 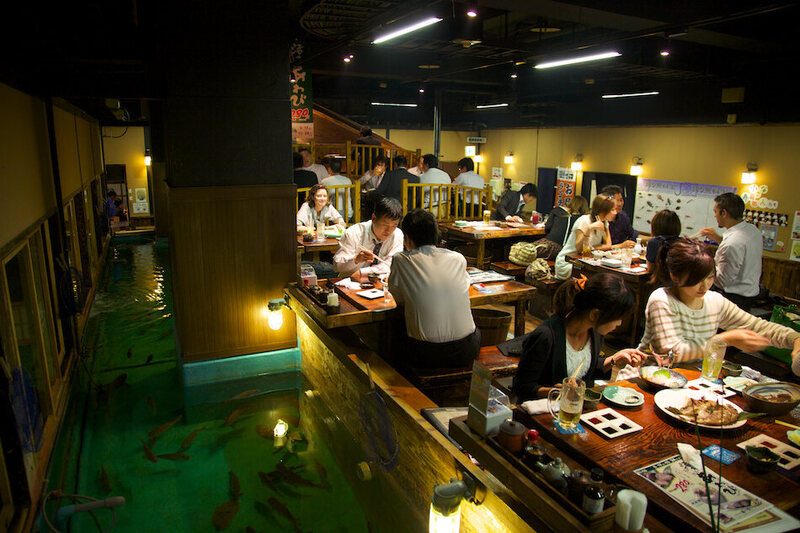 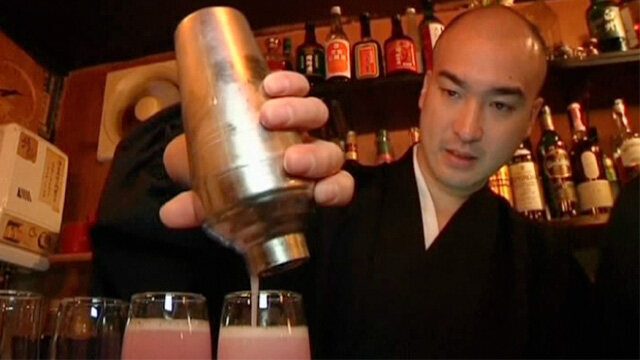 Serving up some spirituality at Vowz (via Bored Couple)

In an effort to keep Buddhism alive in Japan, Buddhist monk Yoshinobu Fujioka has decided to go back to his roots. In the old days, Buddhist temples were gathering places for people to socialize and have a drink. This led the ordained priest to start his own bar, called Vowz. People in the Yotsuya neighborhood gather at the Buddhist-run bar for a few drinks and some spiritual guidance in the form of sermons and homilies. The bar has themed drinks such as “Perfect Bliss,” “Infinite Hell,” and “Enslavery to Love and Lust.” 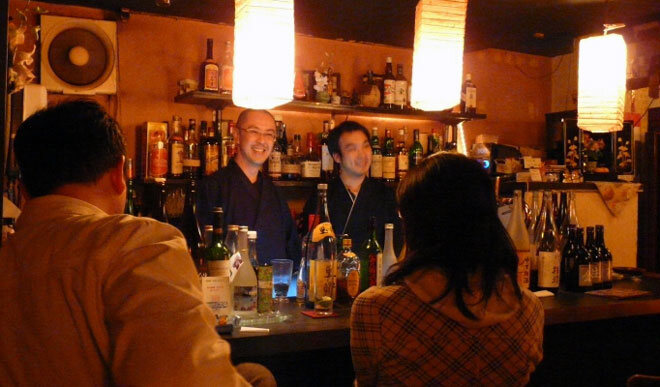 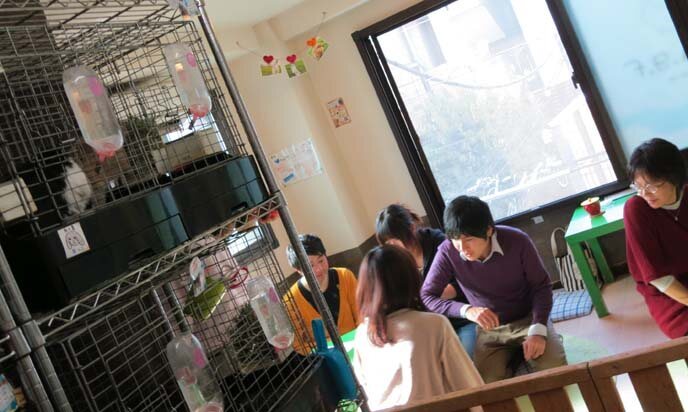 There are strict housing rules in Japan that prevent most residents from having any pets. However, Japan’s rabbit cafes provide an alternative source of cuddles and cuteness. The cafes look less like a cafe, and more like a pet store, with cages of bunnies lining the walls, and freely roaming the floors.