A world-class collection of mechanical musical instruments and automata. 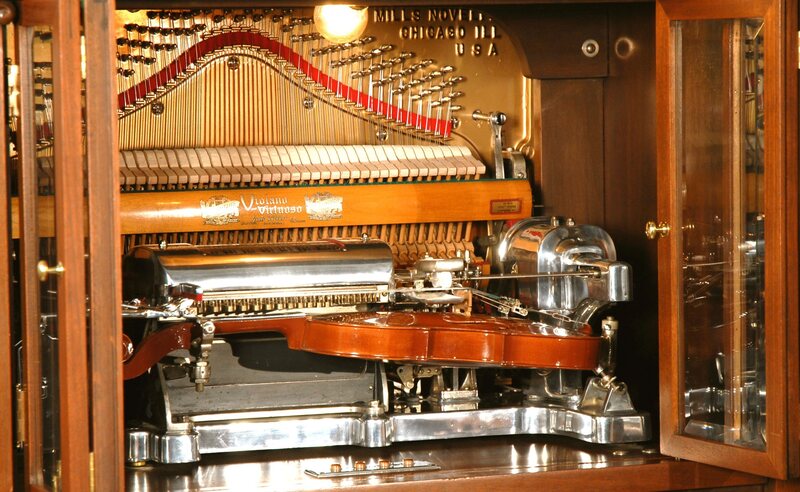 The Violano-Virtuoso (via Morris Museum)

Mechanical instruments have been with us since antiquity. The famous master inventor Hero of Alexandria designed some of the first known automatic instruments in the first century AD, including a “Sequential Automaton of Singing Birds” which produced the sounds of singing songbirds through air forced through pipes. 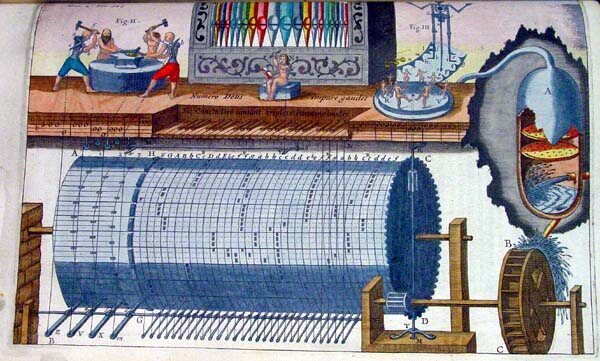 In 1650, Athanasius Kircher penned his treatise on mechanical music, Musurgia Universalis, inroducing the learned world to the wonders of water-powered, barrel-operated pipe organs and musical automatons.

Founded in 1880, by the turn of the last century, the Mills Novelty Company of Chicago was one of the world’s leading manufacturer of coin-operated machines. Beginning with slot machines and gambling devices, the company later began to focus on mechanical instruments, including the Violano Virtuoso, “The Greatest of All Self-Playing Instruments.” 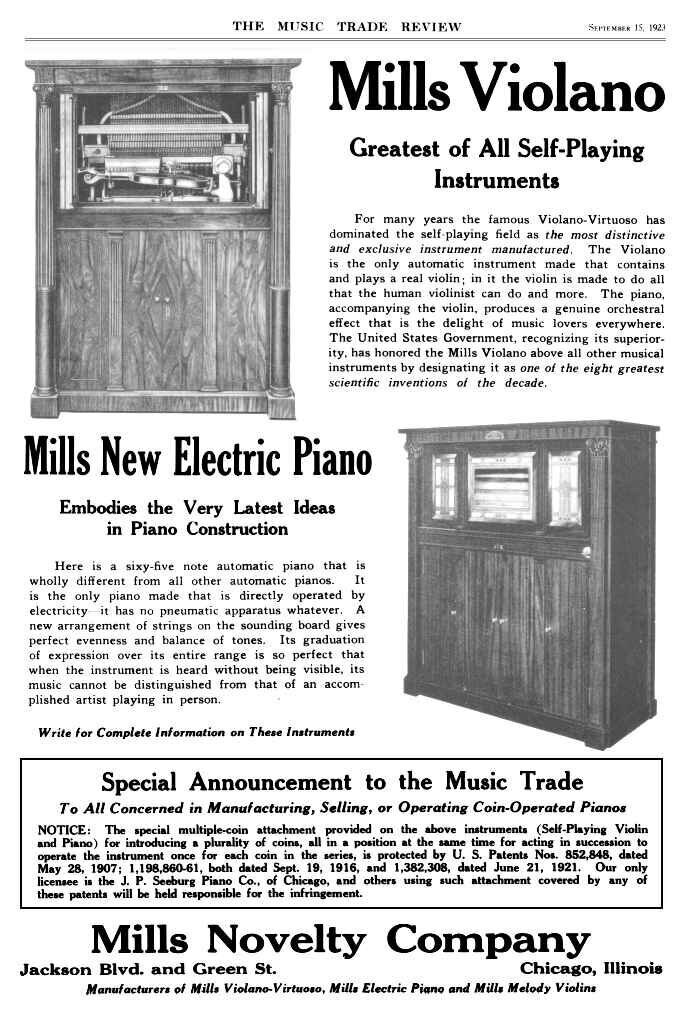 After more than a century in business, we are pleased to say that the Mills Novelty is still creating mechanical instruments for the 21st century and buying and selling vintage machines. Today their mechanical masterpieces are in homes and collections around the world, including one beautiful specimen of the Violano-Virtuoso at the Guinness Collection at the Morris Museum in New Jersey. 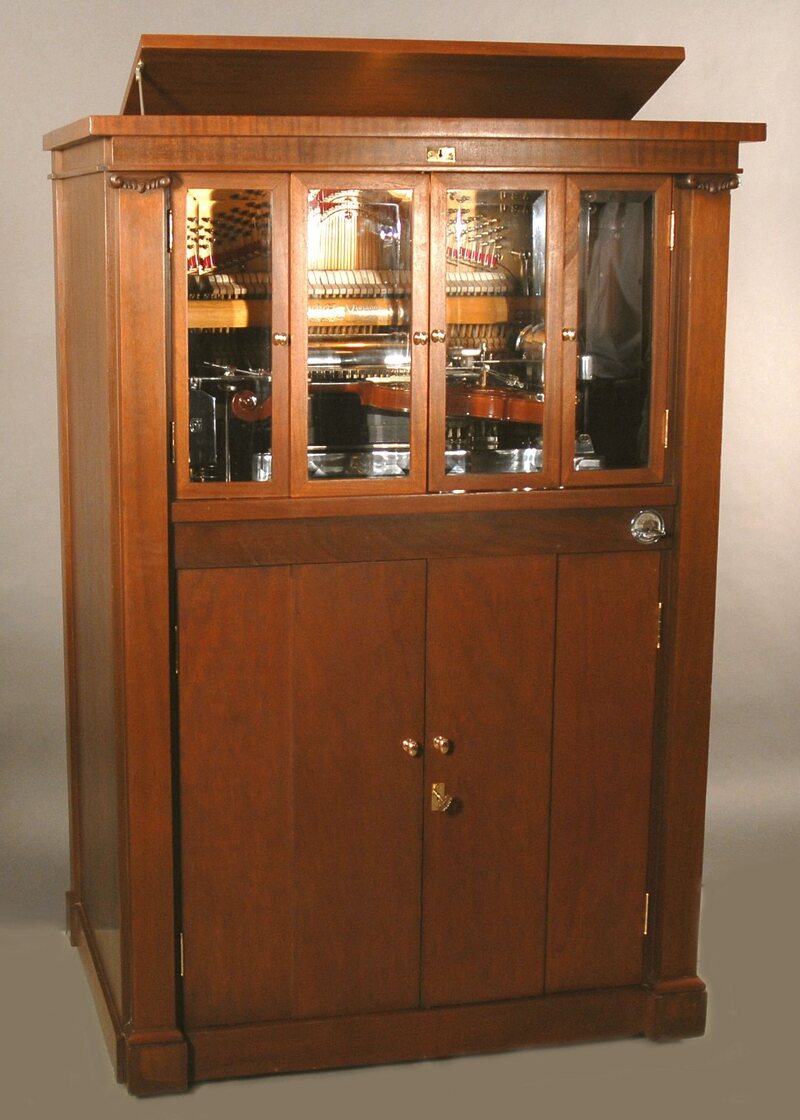 Kelly McCartney, Guinness Collection Curator at the Morris Museum, told us more about this beautiful piece of mechanical artistry:

A 1905 article in Popular Mechanics deemed the “electric violin a success.” The challenge of playing the violin by mechanical means interested a number of inventors in the early 20th century. Only two inventions achieved commercial success though, the Violano-Virtuoso by the Mills Novelty Company and the Hupfeld Phonoliszt-Violina. These large mechanical musical instruments would have been a commonplace form of entertainment in public places, a precursor to the jukebox. Mills advertised the benefits of their instrument:

“Every hotel, café, and refreshment parlor should have the Mills Virtuosa because it will royally entertain customers with the latest music with no expense to the house, and besides it will yield a large and steady income. It takes the place of an orchestra and makes money for you instead of cause you to spend it for salaries (for musicians).”

The Violano was first exhibited in 1909 for the Alaska Yukon Pacific Exposition in Seattle, Washington. For the Exposition, the U.S. Patent Office was asked to pick registered patents that represented the great ideas of the last decade to exhibit. A prototype of the Mills Violano-Virtuoso was one of the inventions chosen. 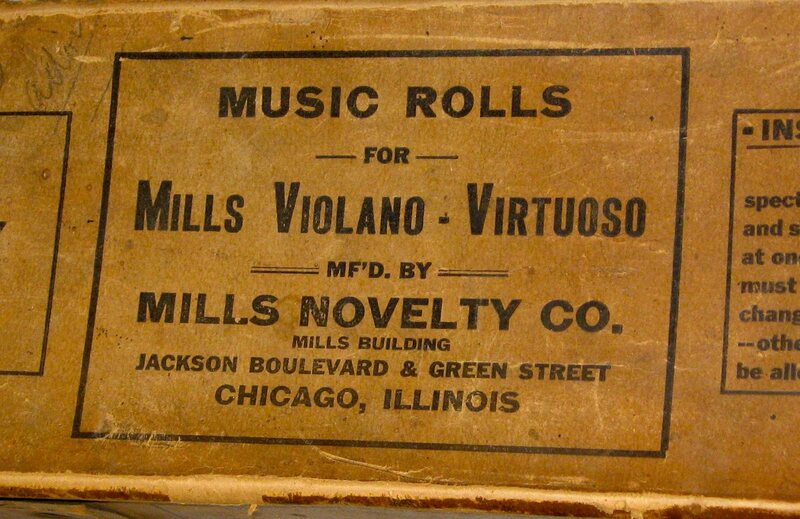 The Violano is a mechanical self-playing violin with a keyboardless piano. It is powered by an electric motor and electromagnets and the songs are played by a perforated paper roll. The instrument has a steel fingering system and rollers that act as a bow. There are 64 steel fingers beneath the four violin strings. Each finger has a spring to hold it down and it rises, by an electromagnetic coil, to contact the string at a certain point to produce the correct note as the string is bowed. A motor that controls the rollers, or bow, turns at five different speeds. Each violin note hole in the perforated paper roll engaged the bow and finger for that note at the same time. To play short notes, a separate staccato hole (in the paper roll) causes bow to lift off strings while the fingers remain engaged. For a vibrato, a large magnet and weighted lever shake the violin tail piece. 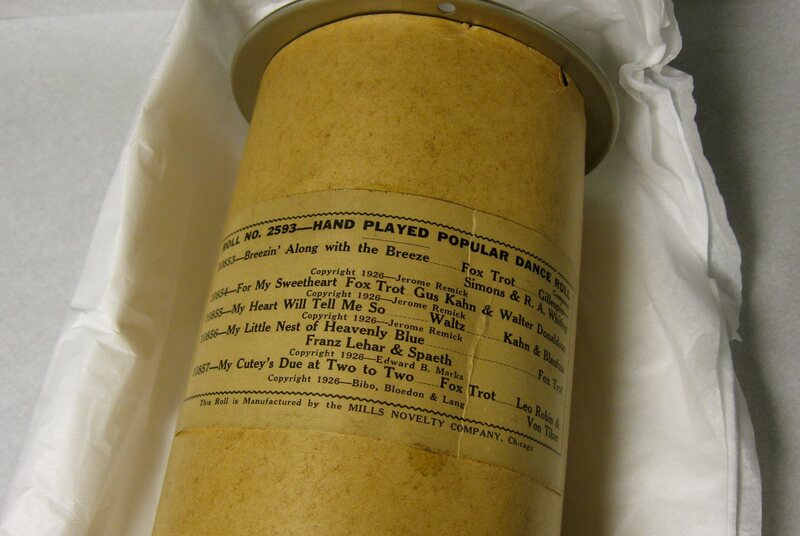 A little over 4,000 Violano-Virtuosos were made in the early 20th century. There were several styles of cabinets made for the Virtuoso and by 1916 a deluxe model with two violins had been introduced.

Sales of the Virtuoso were made by the factory until 1915 when they began using regional music dealers to handle their sales and most were sold outright to businesses. The common buyers of the instrument were candy kitchens, confectionery shops, soda fountains, and restaurants. By 1928, with the invention of the radio and phonograph, the Violano-Virtuoso was in decline. The Mills Novelty Company went on to manufacture other products like jukeboxes and radios.

The Guinness Collection is permanently housed at the Morris Museum in Morristown, New Jersey. During his lifetime, the late Honorable Murtogh D. Guinness (1913-2002), assembled one of the world’s finest collections of mechanical musical instruments and automata. The Violano-Virtuoso is exhibit in the Guinness Collection: Mechanical Music and Living Dolls at the Morris Museum.

Glimpse Millions of Years Into Evolution's Past With Sequenced Coelacanth Genome

For a unique gift, order a pair from the island of Tristan da Cunha.
Video • Wonder From Home