Glimpse Millions of Years Into Evolution's Past With Sequenced Coelacanth Genome - Atlas Obscura
Want to see fewer ads? Become a Member.
In This Story
Place 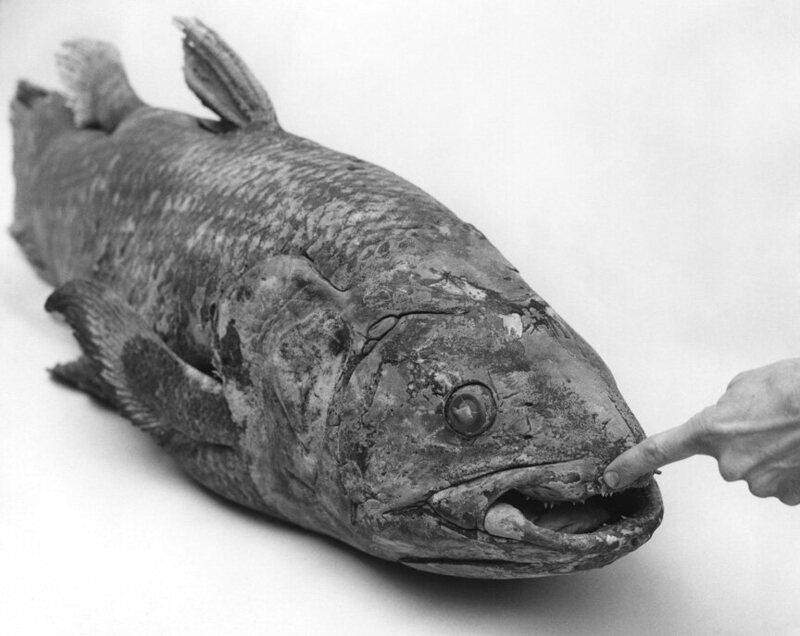 In honor of DNA Day, which is internationally held on April 25 to commemorate the day in 1953 that James Watson and Francis Crick with fellow researchers including Maurice Wilkins and Rosalind Franklin published their findings on the double helix structure of DNA, we are celebrating what is possibly this year’s most exciting DNA news, that of the sequencing of the coelacanth genome.

That ancient-looking five-foot-long fish that has been lurking deep beneath our oceans for hundreds of millions of years was long thought extinct until one turned up in 1938. Now an international group of researchers has fully sequenced the rediscovered coelacanth’s genome, revealing secrets of evolution in its DNA. Their findings were published last week in Nature journal, stating: ”The modern coelacanth looks remarkably similar to many of its ancient relatives, and its evolutionary proximity to our own fish ancestors provides a glimpse of the fish that first walked on land.” 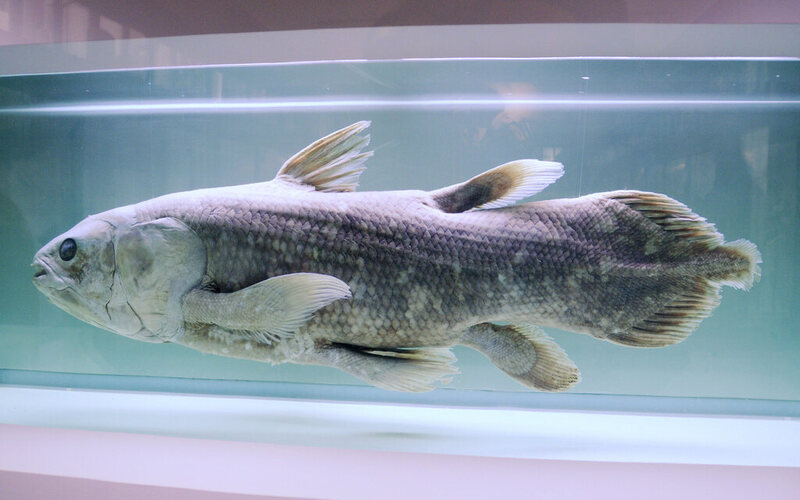 Here’s the summary of their conclusions:

Through a phylogenomic analysis, we conclude that the lungfish, and not the coelacanth, is the closest living relative of tetrapods. Coelacanth protein-coding genes are significantly more slowly evolving than those of tetrapods, unlike other genomic features. Analyses of changes in genes and regulatory elements during the vertebrate adaptation to land highlight genes involved in immunity, nitrogen excretion and the development of fins, tail, ear, eye, brain and olfaction. Functional assays of enhancers involved in the fin-to-limb transition and in the emergence of extra-embryonic tissues show the importance of the coelacanth genome as a blueprint for understanding tetrapod evolution.

Basically, this old fish can allow us to glimpse back at a time in evolution usually only studied in fossils, and figure out when exactly some creatures in the water started walking on land. And, unsurprisingly, it shows that the coelacanth evolves way slow, making it quite similar to what it was like 70 million years ago when the world once thought it went extinct. However, don’t go calling it some kind of relic from another time. As Jessica Alföldi of the Broad Institute, a co-author of the genome paper, defended in a statement: ”It’s not a living fossil; it’s a living organism. It doesn’t live in a time bubble; it lives in our world, which is why it’s so fascinating to find out that its genes are evolving more slowly than ours.” 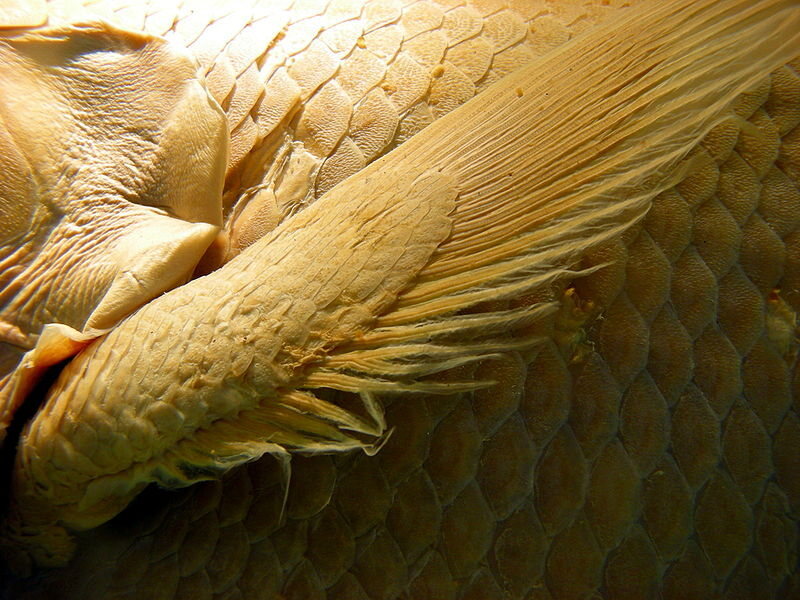 Coelacanth fin in the Natural History Museum in London (via Wikimedia)

And since it does live in our world, we can even see it up close for ourselves. Here are some of our favorite coelacanths on display, whether stuffed, preserved, or fossilized, that you can visit around the world. Perhaps stop by for today’s DNA Day to mark another year in our advancement of understanding the secrets of where we come from locked in the structure of our genetics: 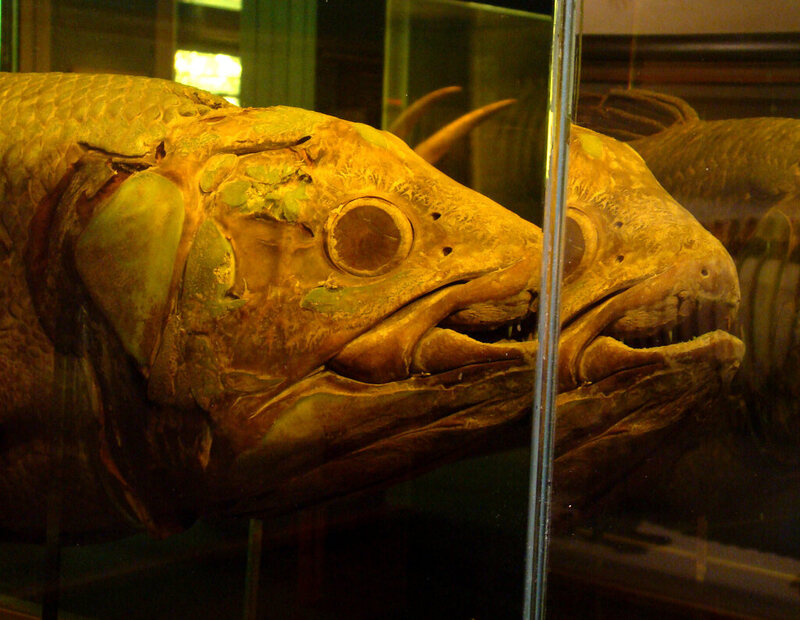 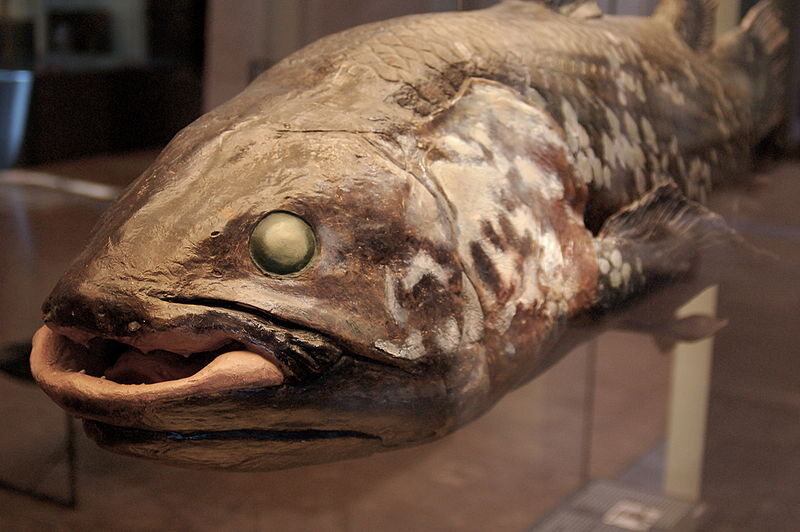 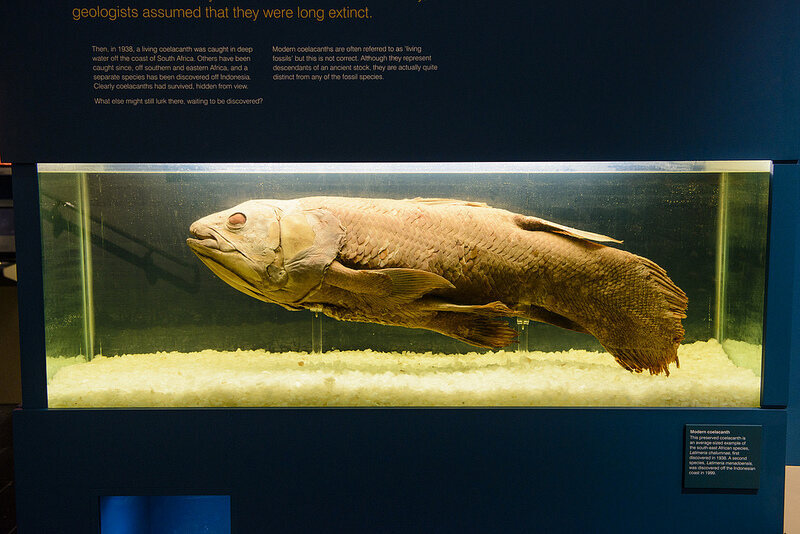 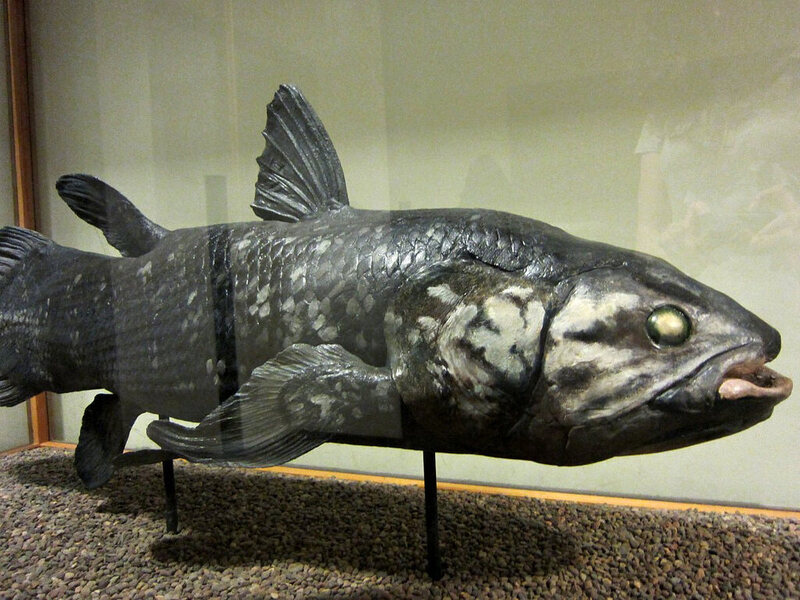 Possibly a replica, but sweet paint job nonetheless! (photograph by the author) 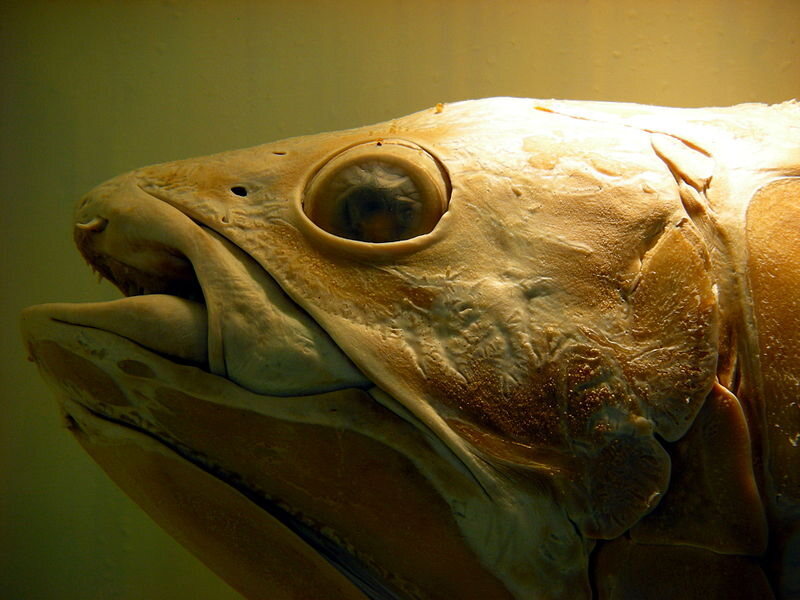 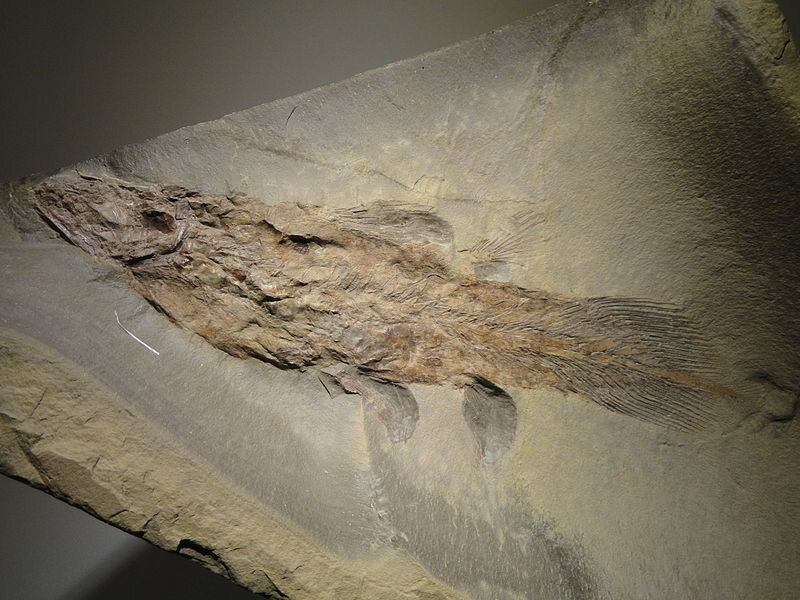 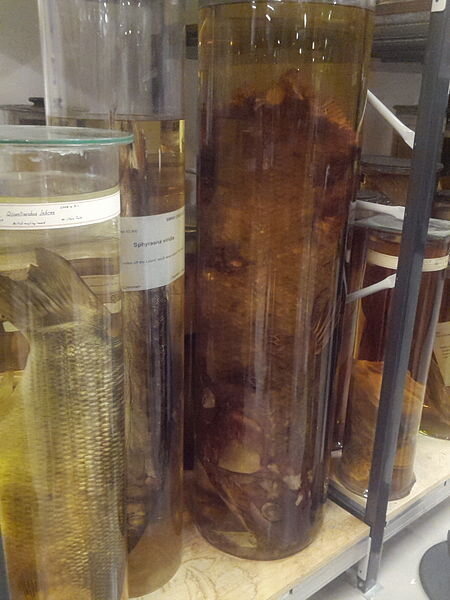 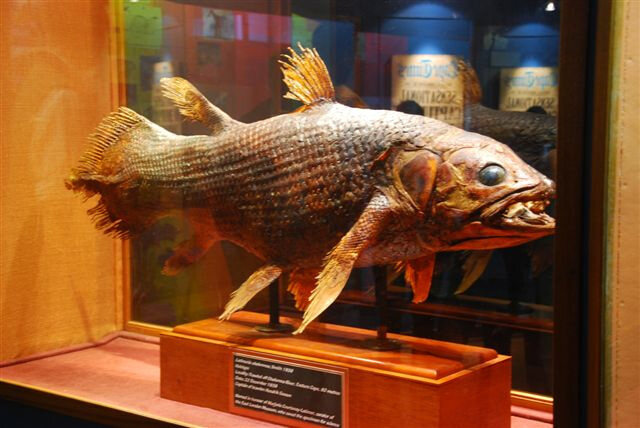 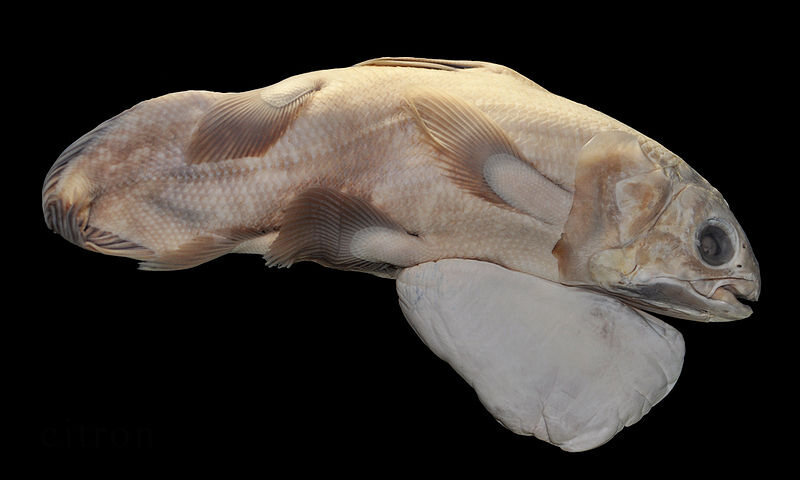 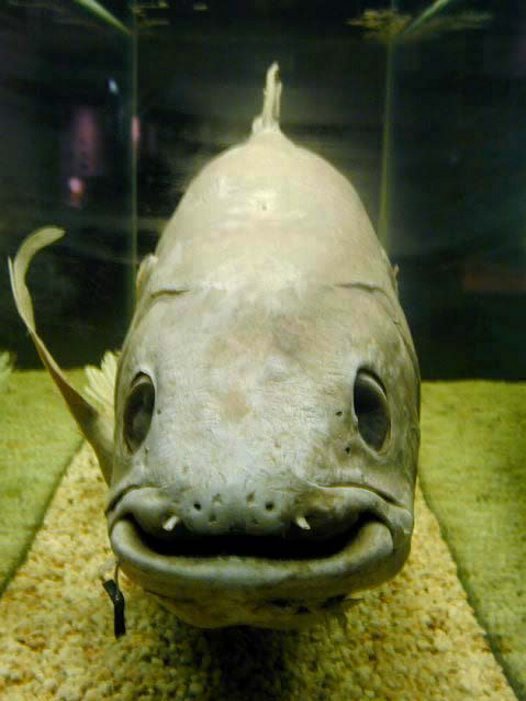 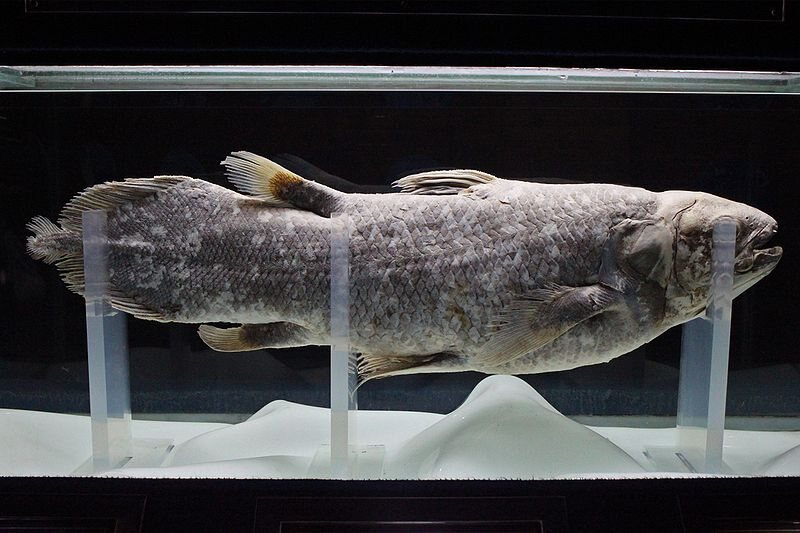 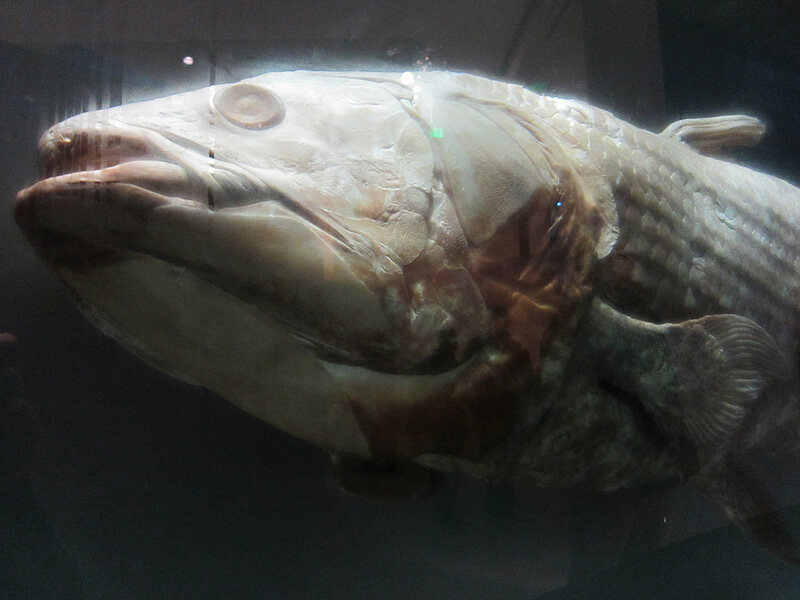 Photograph by the author

This terrifying creature has evolved over millennia—but never lost the need to feed.
cryptozoology