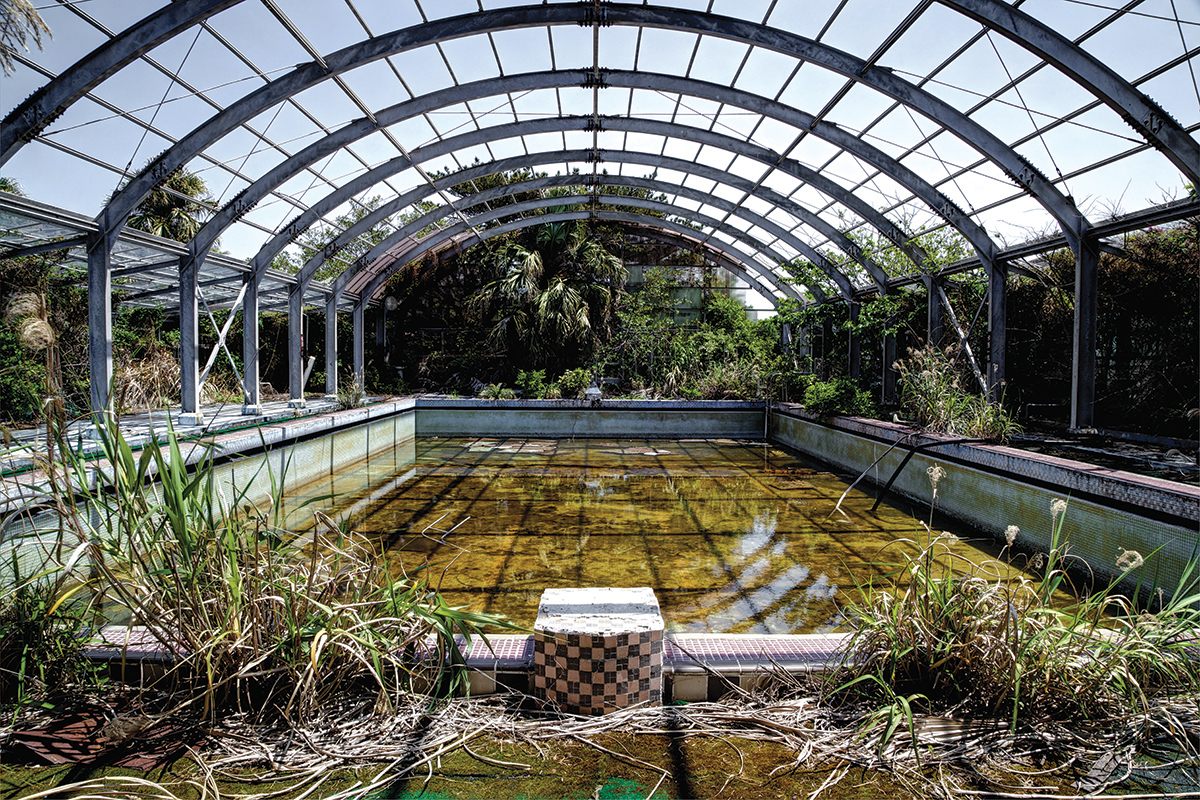 A swimming pool at an abandoned resort on Hachijo Island, Japan. All Photos: Shane Thoms

Of all the abandoned hotels that photographer Shane Thoms captured for his book Haikyo: The Modern Ruins of Japan, the one he finds most compelling is the Royal Hotel. A vast, ornate, crumbling structure on the volcanic Hachijo Island, it has everything Thoms wants from a ruin. “Exploring this marvelous, massive and haunting structure was just like stepping into a Tim Burton film set,” he says. “Darkly enchanting in all the right ways, it harks back to my early beginnings in that I could once again fulfill my playful fascination with the macabre and experience a magically creepy place—I was so in love.”

As a child, Thoms was fascinated by the unsettling environments of horror films like Nightmare on Elm Street. “I was heavily drawn to the darkness and danger of any space that resembled Elm Street’s huge labyrinthine boiler room or Candyman’s dilapidated and derelict urban project housing.” He began to sneak into empty buildings for “some kind of thrilling, creepy experience for myself.”

Thom’s interest deepened when, in his twenties, he began to photograph abandoned buildings. He realized that they were more than just eerie spaces with broken windows. “These empty, former lived-in spaces became realms where human emotion and energy still lingered,” he says. “Each item in the space had been left like a prop on a stage where the observer could sit, watch and ponder the past.”

In Japanese, haikyo means both ruins and the urban exploration process of tracking down those abandoned, overgrown spaces. Thoms’s book focuses on Japan’s now-derelict spaces that once housed modern life: apartments, mines and, of course, hotels and leisure facilities. This includes not just the once-splendorous Royal Hotel, but also deserted onsens and one of Japan’s “love hotels”, the Fuu Motel. Here, rooms that were once hired on an hourly basis now have branches growing through the windows.

Even these encroaching weeds are appealing to Thoms. “Kudzu vine is considered a pest,” he says, but he still finds it “very beautiful and attractive. Seeing gigantic rollercoasters covered in kudzu vine is a truly magical experience and I adore it.” (One of Japan’s most famous ruins—also in the book—was Nara Dreamland, a Disney-inspired amusement park that is currently being demolished.)

Not all the nature he experiences is so appealing, however. When shooting, Thoms keeps a wary eye out for Japanese giant hornet nests, which can be found in many abandoned buildings. “They attack in numbers and can be fatal and very painful.” He is also very careful about potential structural issues and asbestos hazards.

For Thoms, photographing these abandoned spaces has a purpose beyond his own enjoyment. There is “an importance in documenting these spaces before the process of urban evolution (ie. demolition) erased it forever”, he notes. “I feel that much can be learned about ourselves and society by documenting the hidden fragments of our urban past.”

AO has a selection of images from Haikyo: The Modern Ruins of Japan.

America's First Butter Sculptor Was an Artist and a Celebrity