Add a Surrealist Touch to Your Thanksgiving With These Dali Recipes - Gastro Obscura
Want to see fewer ads? Become a Member. 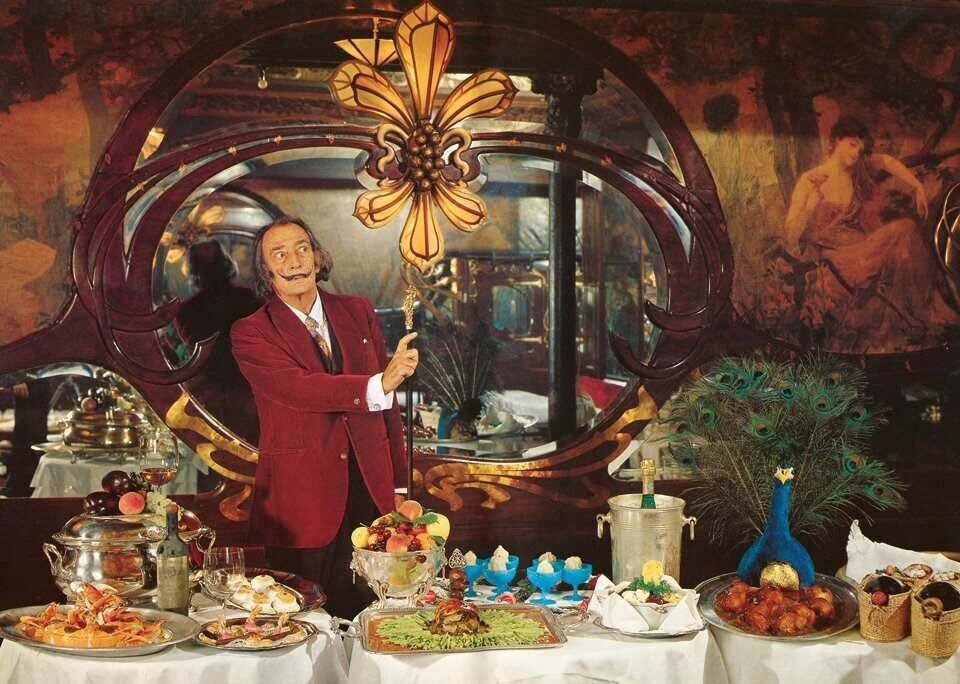 Salvador Dali at one of his lavish dinners. Some of the dishes featured in the photograph appear in his cookbook, Les Dîners de Gala. All images: Courtesy of Taschen.

Salvador Dali once claimed that “Surrealism is destructive, but it destroys only what it considers to be shackles limiting our vision.”

It was perhaps because of this that he decided to bring surrealism to one of the art forms he most admired: cooking. In 1973, he published the wonderful, confusing, and delectable cookbook Les Dîners de Gala—a title referring both to his wife, who went by the name Gala, and the lavishness of the dishes he included.

As with everything Dali, the book is all about finding extreme pleasure. But this pleasure is combined with the grotesque, the morbid, and even the violent. He writes at the beginning of the book:

Do not forget that woodcock “flambee” in strong alcohol, served in its own excrements, as is the custom in the best of Parisian restaurants, will always remain for me in that serious art that is gastronomy, the most delicate symbol of true civilization.

Within the 12 chapters and 136 recipes, Dali plays with our senses, our imagination, and our logic. Each chapter is peculiarly named— first courses are “the supreme lilliputien malaises” and meats are “the sodomized starter-main dishes.” He even dedicates an entire chapter to aphrodisiacs, “the I eat GALA.”

The chapters are dotted with philosophical musings, striking illustrations, and instructions that range from the whimsical (“have this delicate dish prepared for you only in Brussels”) to the cruel (“Rest assured that for each member you will pull off [the gooslin] will scream so that he will be eaten live rather than dead”).

But for all the eccentricities, the cookbook is surprisingly practical. As food historian Alex Ketchum, who runs The Historical Cooking Project, told Atlas Obscura, many so-called cookbooks are not really about food preparation, but a way to talk about ideas (as in the Anarchist Cookbook), or tell stories. Les Dîners, however, actually is about the recipes, which, as Ketchum attests, “are not just edible but very good.” The surrealism, she says, comes in the illustrations within the book and also in his recommendations.

Though there are only around 400 copies of the original book left, as of this month the first-ever reprint of the book has been released by Taschen.

In honor of the re-release, we have compiled some of the recipes from the book. With a bit of patience and a wide-open mind, you can use these to create the perfect surrealist Thanksgiving meal.

(To drown out your family’s political opinions)

This is quite appropriate when circumstances such as exhaustion, overwork or simply excess of sobriety are calling for a pick-me-up.

Here is a well-tested recipe to fit the bill. Let us stress another advantage of this particular pep-up concoction is that one doesn’t have to make the sour face that usually accompanies the absorption of remedy.

At the bottom of a glass, combine pepper and ginger. Pour the bitters on top, then brandy, and “vieille cure”. Refrigerate or even put in the freezer.

Thirty minutes later, remove from the freezer and stir the juice of the orange into the chilled glass.

Drink..and wait for the effect.

It is rather speedy.

(To innovate your regular turkey recipe)

Pick a tender and well-fleshed young turkey. Clean it and pass it through a flame; we are going to stuff it.

In a saucepan, put the tablespoon of oil and in it brown the tablespoon of flour. When it turns light brown, add water, sliced carrots, chicken bouillon and sliced onions. At boiling point, add the bird. Cover and simmer for 1 hour.

At the same time, mash the 10 ozs of roquefort cheese with the breadcrumbs, corn flour, egg yolk, 2 eggs, salt. Blend into a smooth paste.

Bring the quart of water to a boil, add salt.

Using a spoon, put the paste into the water (each spoonful should hold about the size of an egg).

When the puffs start floating, remove them and drain them on a dishtowel. Then roll them in breadcrumbs.

Remove the turkey, strain the gravy, slam the fat off and keep it warm to serve in a gravy boat.

Place the turkey in a baking dish surrounded with the puffs. At the bottom of the dish put the tablespoon of butter. Bake at -400°- for 15 minutes.

Watch it: the puffs turn golden very quickly, you will have to turn them several times.

Cut off the green part of the artichoke leaves and scrape the hearts.

Put the artichokes in salted boiling water for 30 minutes. Remove, cool, and take out the choke that is in the center. Mash the peas, the peeled avocados and the Pâté de foie.

Mix well and combine with the swiss cheese and tequila.

The particular taste of the latter will go well with the aroma of the vegetables; but if you cannot buy any tequila, use any white liquor.

Using this stuffing which you have salted and peppered, generously fill your artichokes. Put them side by side at the bottom of a big pot.

In a bowl, combine water, wine, tomato, and thyme. Add salt and pepper and a bit of the stuffing. Don’t let the liquid drown the artichokes. Cover and simmer on low flame for 1 ¼ hours.

Now and then, add a bit of liquid so the bottom won’t burn.

(In a surrealist Thanksgiving, crayfish can substitute cranberry sauce)

After giving us this recipe the chef decided that he wanted to keep the exact ingredients a secret. We present the recipe any way for its reading pleasure.

In order to realize this dish it is necessary to have crayfish of 2 ozs each.

If you don’t have the time to cook these or the money to spend on their lavish ingredients, heed Ketchum’s advice: make your traditional Thanksgiving meal surrealist by presenting each dish in peculiar ways. That is, after all, the way of Dali.

The Pilgrim Fathers' Church has a long history.
featuresfoodart

With Smog Meringues, You Can Taste Your City's Air Pollution

Artists whip up a way for your taste buds to go through what your lungs do every day.
art

They sat on top of a fridge for decades.
art

The Architect Baking Bread Along the Border Wall

Guorui Chen brought a hometown tradition back from extinction.
Video • Wonder From Home