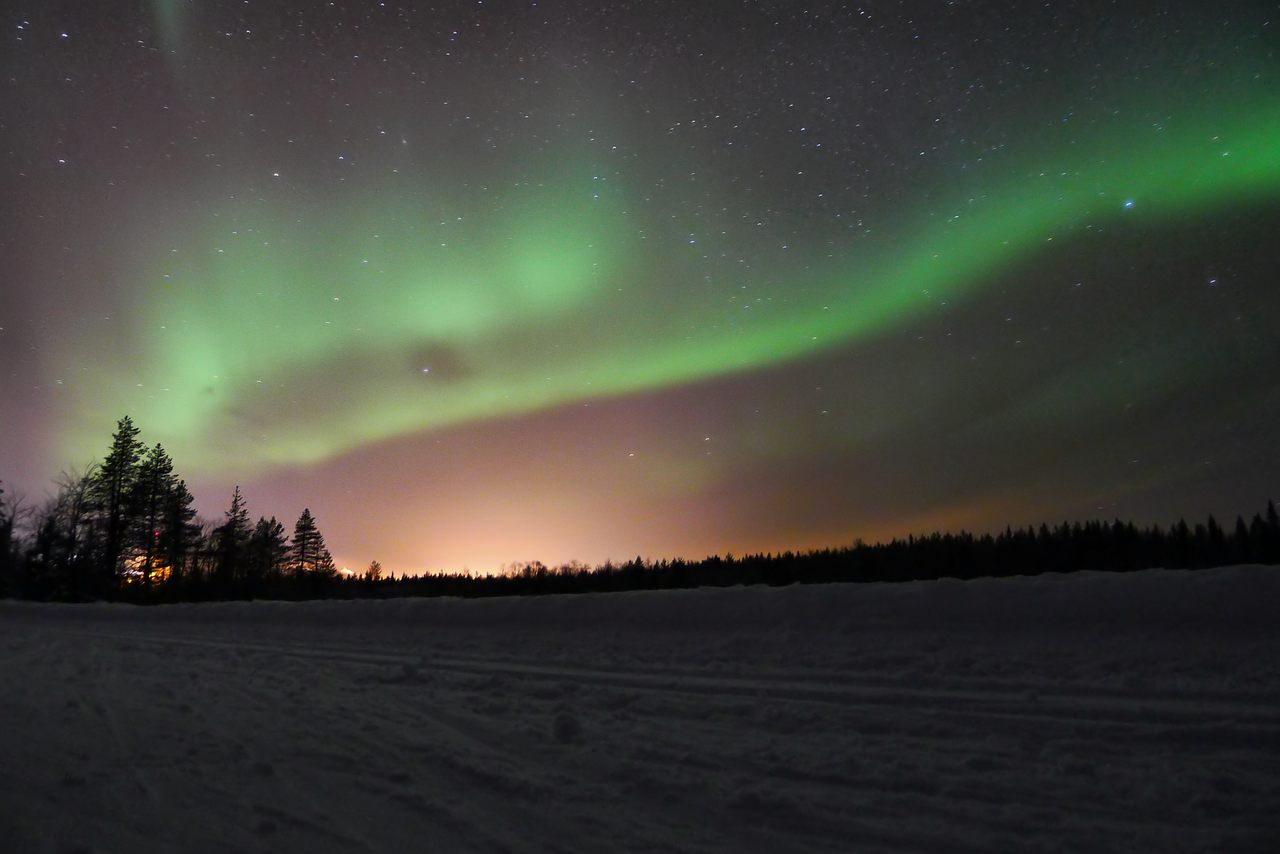 A 19th-century proponent of the Hollow Earth theory posited that aurora borealis were created by gas escaping from the inner earth. Timo Newton-Syms / Wikimedia (SA 2.0)
In This Story
Place

Former utopian colony based on the belief that the universe exists in a hollow sphere.
Place

A memorial for an outsider theorist who believed that the planet is actually hollow.

From time immemorial, people have believed that there is another world lying just beneath the surface of our planet. To a number of cultures—the ancient Greeks for one—it is a dark place filled with the souls of the dead. But most of those early beliefs were metaphorical or mythological in origin.

Modern science holds that the Earth is an unbroken series of layers, crusts, and liquid magma surrounding a dense, hot core made primarily of iron and nickel. But in the 17th century, some of the leading scientific minds of the time had a different theory—that the planet is actually hollow. This idea has proved incredibly durable.

Even today, there is a small cadre of Hollow Earth believers who are fighting valiantly to validate their ideas through books, websites, meetings, and some extremely ambitious travel plans.

Possibly the first person to scientifically speculate about a hollow earth was none other than Edmund Halley, of Halley’s Comet fame. Proposed in 1692 as a way of explaining anomalous compass readings, Halley’s theory was that the planet is a series of nested, spherical shells, spinning in different directions, all surrounding a central core. In his estimation, based on readings of the magnetic field and what he knew of the gravitational pull of the sun and the moon on the Earth, this model could account for any inaccuracies in his readings of the magnetic fields of the planet. He also posited that the space between each shell may have had luminous atmospheres capable of supporting life.

Halley’s strange idea was expanded upon over the next few centuries, tossing out the messy view of multiple spheres for the vision of the entire interior of the Earth as just one, impossibly large cavern. Generally, this new view of the hollow Earth is accompanied by the theory of a small sun that hangs in the very center, creating a lush, livable environment on the flip side of the Earth’s surface. According to a number of hollow Earth websites, this vision was developed among famous mathematicians and scientists such as Leonhard Euler in the 18th century and Sir John Leslie in the 19th century, although the sources for these accreditations seem to be somewhat nebulous.

Regardless of where it originated, the model of a Hollow Earth managed to grow and survive. In 1818, John Cleves Symmes, Jr. published his Circular No. 1, declaring to the world that the Earth is hollow. Symmes, a veteran of the War of 1812 and an unsuccessful trader, soon became maybe the most famous and successful proponent of the Hollow Earth theory. His initial vision of the Earth’s interior was like a simplified version of Halley’s multi-layered model, with the exception that Symmes’ version included huge holes at the north and south poles which allowed access to the hidden world inside. These holes, his unique addition to Hollow Earth theory, would even come to be known as “Symmes Holes.”

In his very first declaration, Symmes proposed to mount an expedition to the North Pole, where he was sure they could locate one of these apertures and gain access to the inner Earth. He too believed that the interior of the Earth not only could, but did support life, saying in Circular No. 1, that the inside of the Earth would be “stocked with thrifty vegetables and animals if not men.” Symmes believed that his theory was not science fiction, but science fact, and that it applied not only to the Earth, but to all planetary bodies. To him, the whole universe was hollow.

Even in the 19th century, Symmes’ theories were greeted with derision from the public and scientific community, but he would not be silenced. Symmes continued to campaign, giving lectures and publishing letters about the Hollow Earth, always angling for an expedition to the North Pole that would prove his theory. Barreling right through the skeptics, Symmes was eventually able to convince enough people of the possibility of his Hollow Earth that in 1822, he and his supporters actually got Congress to vote on funding for his expedition. The grant was shot down, but Symmes’ belief in the inner Earth never died. He continued to campaign for the theory until his death in 1849.

Even after Symmes’ death his idea continued to thrive amongst believers. Students and admirers of Symmes’ work, and even Symmes’ own son continued to publish materials explaining the increasingly odd theory.

One bizarre offshoot of the traditional Hollow Earth theory, put forth by natural healer and eventual cult leader, Cyrus Teed, even inverted the idea, devising a “cellular cosmology” that placed the entire universe inside a shell. According to Teed’s thinking, humans were actually living on the inside of the Hollow Earth, looking up at the universe, which itself was just an illusion created by a strange solar mechanism. The stars were just reflections of the mechanism’s light. Teed’s theory managed to gain enough traction that a small cult developed around him, called the Koreshan Unity after Teed renamed himself Koresh. The Koreshans established an extensive colony in Estero, Florida in 1894, but most of the community disbanded after Teed’s death in 1908.

Both Teed and Symmes still have monuments dedicated to their work and beliefs. The location where the Koreshan community made their home is now protected as the Koreshan State Historic Site, while Ohio’s Hollow Earth Monument is dedicated to Symmes’ work.

Even as unbelievable as the beliefs of Symmes and Teed were, as the Hollow Earth theory grew into the 20th century, it began to take on an even more supernatural air.

In 1864 Jules Verne published A Journey to the Centre of the Earth, which proposed a weird world inside our own, and while it was not the first work of fiction to propose such a thing (it could be argued that the first such work of fiction regarding the weird world inside of our own is Dante’s poem, Inferno), Verne’s work quickly became the benchmark for such fantasy tales, giving steam to a whole sub-genre of subterranean science-fiction. Many of these stories used the theories of Halley and Symmes as jumping off points for tales of weird prehistoric jungles and highly advanced, lost races of humans. The 1892 novel, The Goddess of Atvatabar, or The History of the Discovery of the Interior World, used Symmes’ model as a basis for a tale of a rich interior world inhabited by a race of spiritually enlightened beings. This vision of the Hollow Earth would seem to be one of the prime inspirations of many of the current tropes among modern hollow Earth theory.

Modern belief in the Hollow Earth theory can be a bit hard to pin down, encompassing such disparate subjects as the Northern Lights and even an escaping Hitler, but despite the variations a few themes do seem to be common among Hollow Earth truthers.

Among most believers, the inside of the Hollow Earth is a lush tropical paradise that very likely houses an advanced race of humans/aliens/giants. No matter where they come from, they are generally characterized as peace-loving, and advanced far beyond those on the Earth’s surface. The perfect climate believed to exist in the Hollow Earth is said to produce animals and people that are larger and far more healthy than those on the surface. This inner world is sometimes called or associated with Agartha, a legendary city at the Earth’s core often tied to Eastern mysticism.

“My conception of the Hollow Earth, based on my research, is that the shell of the Earth is about 800 miles thick, from the outside to the inner surface,” says Rodney Cluff, author of World Top Secret: Our Earth IS Hollow. He believes that half the planet is taken up by surface weight, and then there’s empty space, and then, something else. “Suspended in the center of that hollow is an interior sun that is divided by day and night sides,” he says.

If it is to be believed that the Earth is in fact hollow, and home to all manner of super-race and megafauna, why have we never contacted them, or gone there? According to Cluff, we have, but an international banking conspiracy has worked to cover up the existence of the Hollow Earth and hide evidence of any Symmes Holes. This sort of paranoid, conspiratorial thinking tends to be another hallmark among modern Hollow Earth believers.

Through the mid-2000s and into the early 2010s, Cluff was a part of a long-gestating expedition known most recently as the North Pole Inner Earth Expedition. Unfortunately after a number of setbacks including backers and members of the team falling victim to calamities ranging from cancer to fatal plane crashes, the expedition was put on hiatus.

As of 2022, a team of Hollow Earth advocates was again planning to mount an expedition on a nuclear-powered icebreaker (this expedition was previously delayed by the pandemic). They believe there is a hole in the sea floor which will allow access to the interior of the earth under the near-constant cloud cover and ice of the Arctic Sea, seven days out from Murmansk, Russia.

Even if they don’t find it, the Hollow Earth theory will likely continue on. Until humans can actually peer into the Earth’s core, who can say that it’s not filled with Germans or aliens or a very small sun.

This story was updated in June 2022 to adhere to Atlas Obscura’s current editorial standards and include information about the planned Arctic expedition.

In the long-forgotten "Swastika Night," Hitler is a god, women are subhuman, and love is dead.
space exploration

Find out what it takes to make your favorite spaceships tick, hum, and drone.
science

The Problem With Invisibility Is The Blindness

Invisibility creeps closer to becoming a reality but we still don't know how to see out of it.
objects of intrigue

Object of Intrigue: The Most Sought After Star Wars Action Figure