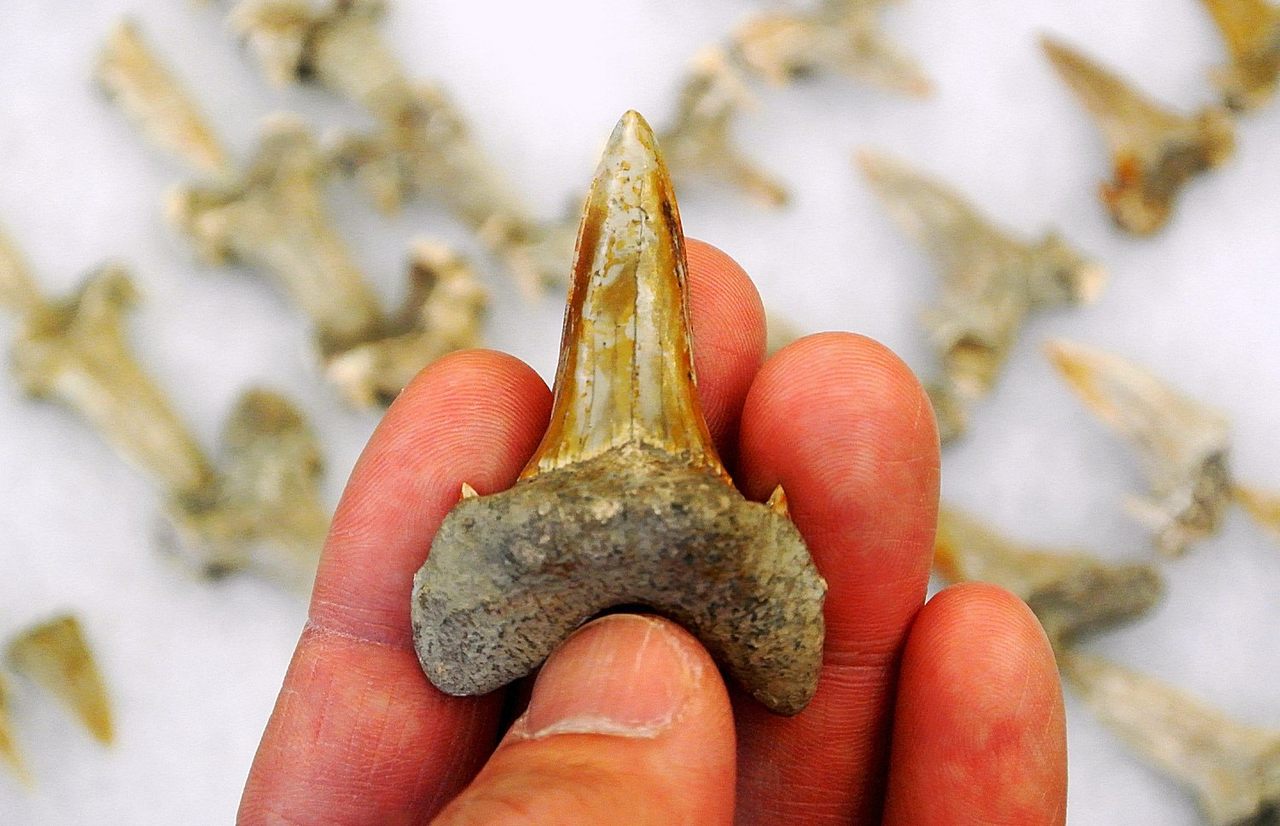 This ancient shark may have been slow-moving, but it was still pretty pointy. Courtesy Kenshu Shimada
In This Story
Destination Guide

During the Late Cretaceous period, some 90 million years ago, long before Kansas was a flat expanse of grassy plains, it was a part of a great inland sea that connected what is now the Gulf of Mexico to the Arctic Ocean, right through Middle America. That’s why giant prehistoric sharks often turn up in a state that today is as landlocked and crop-covered as they come. Recently, after nearly a decade of deliberation over a collection of fossilized teeth, the menagerie added an ancient relative of today’s great whites that once swam what’s called the Western Interior Seaway. The find, described in a paper published in the Journal of Vertebrate Paleontology, came out of a ranch in Mitchell County, about 50 miles south of the geographic center of the United States.

“The Western Interior Seaway was apparently a relatively stable, warm ocean that provided favorable habitats to a diverse array of prehistoric marine creatures,” says lead author Kenshu Shimada, a paleobiologist at DePaul University in Chicago and a research associate at the Sternberg Museum of Natural History in Hays, Kansas, where the teeth are held.

For about 20 million years, sediments steadily settled on the bottom of that shallow sea—sediments that now stick out of the earth like a butte or lie just below fields of wheat and soybeans.

The shark was a lamniform, a prehistoric mackerel shark in the same family as modern great whites, and could grow longer than 15 feet. While many lamniformes are known for their predatory speed, some, like the megamouth shark, are slow-moving filter feeders. The new species, Cretodus houghtonorum, seems to have been from the more languid side of the family.

“Their lifestyle varied,” Shimada says of lamniformes. “Many of them, but especially smaller species, likely fed on small fish and squid, while larger species were able to consume other large aquatic vertebrates, such as marine lizards called mosasaurs, plesiosaurs, and sea turtles, besides other types of fish.”

Though C. houghtonorum was not a plankton eater—it had classically sharp shark teeth—Shimada determined the fish was slow, in part on the basis of its scales, 23 of which were found on site. (They’re not obvious, but sharks do have small scales.) C. houghtonorum’s scales were not well grooved, the way they tend to be on fast sharks, which means its prey was likely small and similarly pokey.

The remains now reside in the veritable shark tank of the Sternberg Museum, alongside fossils of everything from snails to mosasaurs, as relics of Kansas’s marine past.

It's fun to imagine it leapt out of the water like a torpedo—but unlikely.
reptiles

These prehistoric reptiles reigned over the skies 66 million years ago.
turtles

The ancient relative of a popular (but invasive) pet.
fossils

Found: A Rich Collection of Triassic Fossils at Bears Ears

Another wonder from a wild place now left unprotected.
Want to see fewer ads? Become a Member.
From Around the Web
THE GASTRO OBSCURA BOOK
Taste the World!
An eye-opening journey through the history, culture, and places of the culinary world. Order Now