The Ancient, Sunken Forest That Rises From a Welsh Beach - Atlas Obscura 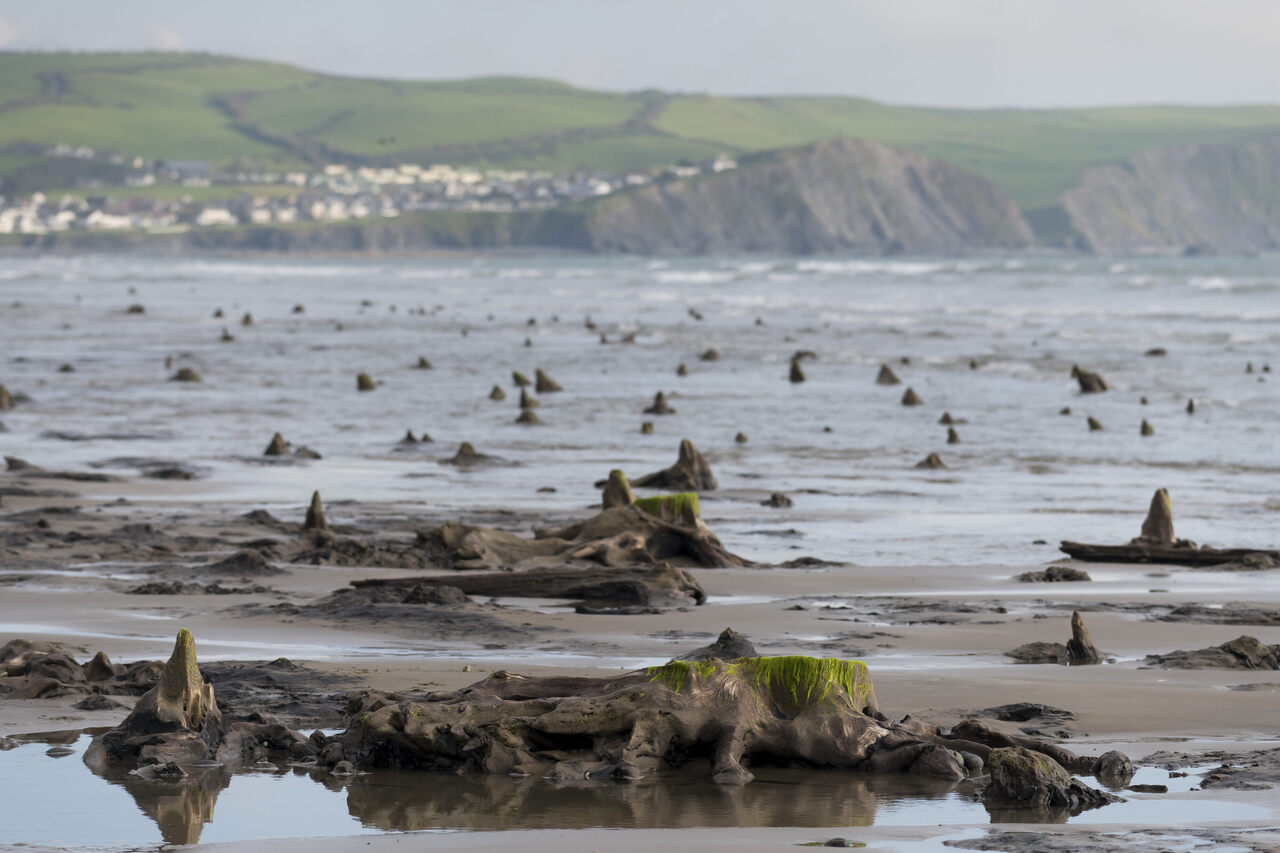 The stumps, as seen in May 2019, remind some onlookers of shark fins. Matthew Horwood/Getty Images
In This Story
Place

A 4,500-year-old forest is slowly being revealed from beneath the sands of a Welsh beach.
Destination Guide

Long before it was a sandy patch abutting Cardigan Bay, the beach near Ynyslas, close to Borth, Wales, was grassland—and before that, thousands of years ago, a forest. The proof is right there in the sodden sand, but it’s only fully visible every once in a while. And when it appears, it looks like something out of a fairy tale.

During times of strong wind and surging waves, layers of the wet sediment peel away, and clumps of sulfuric peat and stumps of long-dead trees emerge. They’re waterlogged, so the shin-high crags of ancient birch, pine, and oak look stained—dark brown, almost onyx when they’re wet. Hundreds, maybe thousands, of these stumps are scattered across a few miles of the shore, jutting through the sand in sharp, pointy angles. The size and shape often remind Martin Bates of shark fins.

Bates grew up just a few miles from this sunken forest, and a love of the ancient trees is in his blood. “There’s always been a connection between the forest and the family,” he says. His father worked on the beach as a geologist, and now Bates studies it, too. “When it’s exposed, it’s an awesome sight,” says Bates, who works as a geoarchaeologist at the University of Wales Trinity St. David. “It’s a great, dark-brown mass stretching into the distance.”

Shifting sands are a too-easy metaphor for the passage of time—boulders becoming rocks, rocks becoming beaches, grains tumbling down through an hourglass. But in Borth, a real shift of sand shuffles around time—and helps researchers piece together how this shore has changed over thousands of years. When the stumps are easily observable at low tide—as they are now, following a storm at the end of May 2019—they’re like the past rising up through the sand to the present.

For the most part, anything that we’ve left along a shore, above or below the tide line, will be threatened or altered in some way by climate change. Human remains in low-lying burial grounds may wash out, long-ago trash heaps known as middens may get jostled loose, and historic lighthouses or other seaside attractions may just topple into the water. Archaeologists, for their part, often view climate change as a race against the clock, to save or document whatever they can before our coasts change forever. At the sunken forest, though, the picture is a little different.

“The fact that we’re getting more storms [and] climate instability means we’re getting to see [the forest] more frequently than in the past,” Bates says. That’s helpful, because in Borth, the record of the past is a bit like a book with missing chapters. Researchers know that the area was a reed swamp before it was a forest, and that the trees flourished around 6,000 years ago. Then, roughly 4,500 years ago, Bates says, the trees seem to have died out as water levels rose. Based on what they can see in the pollen record, grasslands appeared some 3,000 years ago. “It would have been a strange place,” Bates says, with dead trees in place amid the tufts of grass, their roots drowned in salt water.

The tree stumps mingle with a layer of peat, about three feet thick, which had dried out before the trees began to grow. Beneath the stumps, there’s a layer of clay and silt some 60 to 100 feet deep. The sediment probably holds information about what came before the forests and grasslands—about salt marshes, mud flats, and brackish waters, as well as whatever life flourished there, but Bates hasn’t been able to get down as far as he’d like to. This sand, which crumbles and tumbles out of borers and gunks up machine parts, “is a driller’s worst nightmare,” he says. Still, he’s hopeful that he’ll eventually enlist some better tools and fill in the blanks.

Each time the waves expose the forest, “You’ve got to be fairly quick off the mark,” Bates says, that is, swift and efficient in combing the shore to catalog new sights before the sediment washes in again. “Often, I find myself walking the beach and thinking, ‘Ugh, why am I here again, what am I going to see that’s new? Forty-nine times out of 50, it’s nothing usual—and then that 50th time, you see something new or something you have seen before in a slightly different light, and then suddenly go, ‘Oh!’”

After a big storm, he says, it’s usually a matter of two or three months before the sand fully covers the stumps again. That has proven to be ample time to make some interesting new discoveries and reexamine a few old ones. A few years ago, for example, storms exposed the remains of large channel that once flowed through the forest. That led researchers to a better understanding of why, exactly, an ancient aurochs—wild, massive, horned cattle that went extinct in the 17th century—wandered in and died there. (Its remains turned up nearby in the 1960s.) The more researchers can glean about these ancient ecosystems, the more the “little observations suddenly make sense in the bigger picture,” Bates says.

Bates says that while other sunken forests, such as ones in Jersey, in the Channel Islands, are being splintered and demolished by water, the one at Borth seems pretty safe for now. The local Ceredigion County Council, which manages the sunken forest, pledged £39 million for breakwaters and other coastal defenses to buffer the 450 homes nearby against inundation and erosion. Several thousand tons of sand will also be used to extend the beach farther into the sea.

In the meantime, the sunken forest is open to anyone who wants to wander amid the skeletons of long-dead trees. Portions of it have been designated as “sites of special scientific interest” and protected by national conservation laws, Bates explains, but those regulations don’t limit casual access. The shore appeals to surfers and vacationers, Bates adds, and the local tourism bureau suggests it might be part of the lost world of the legendary Cantre’r Gwaelod, mentioned in The Black Book of Carmarthen, thought to be the oldest surviving text written entirely in Welsh. (There’s even an app to help visitors explore the lost realm.)

Bates understands why the landscape strikes people as wondrous. The changing topography and the occasional intrusion of the distant past into the present make it “a slightly mythical, magical place,” Bates says. “You never quite know what you’re going to see.”

Sold: A Letter Where Hemingway Complains That He Sucks at Bullfighting

At least it gave him lots of material.
walesforeststreesancientscience

"What we’re most concerned about is things can still get worse.”
science

Coincidence and correlation in the stars, from the founding of Baghdad to the New York Yankees to COVID-19.
science

When conditions are right, the waters of Congaree National Park can look like bright scoops pooling on a sidewalk.
science

Researchers are now focused on the coconut palms, to make the atoll more friendly to seabirds.
Read more
Thanks for sharing!