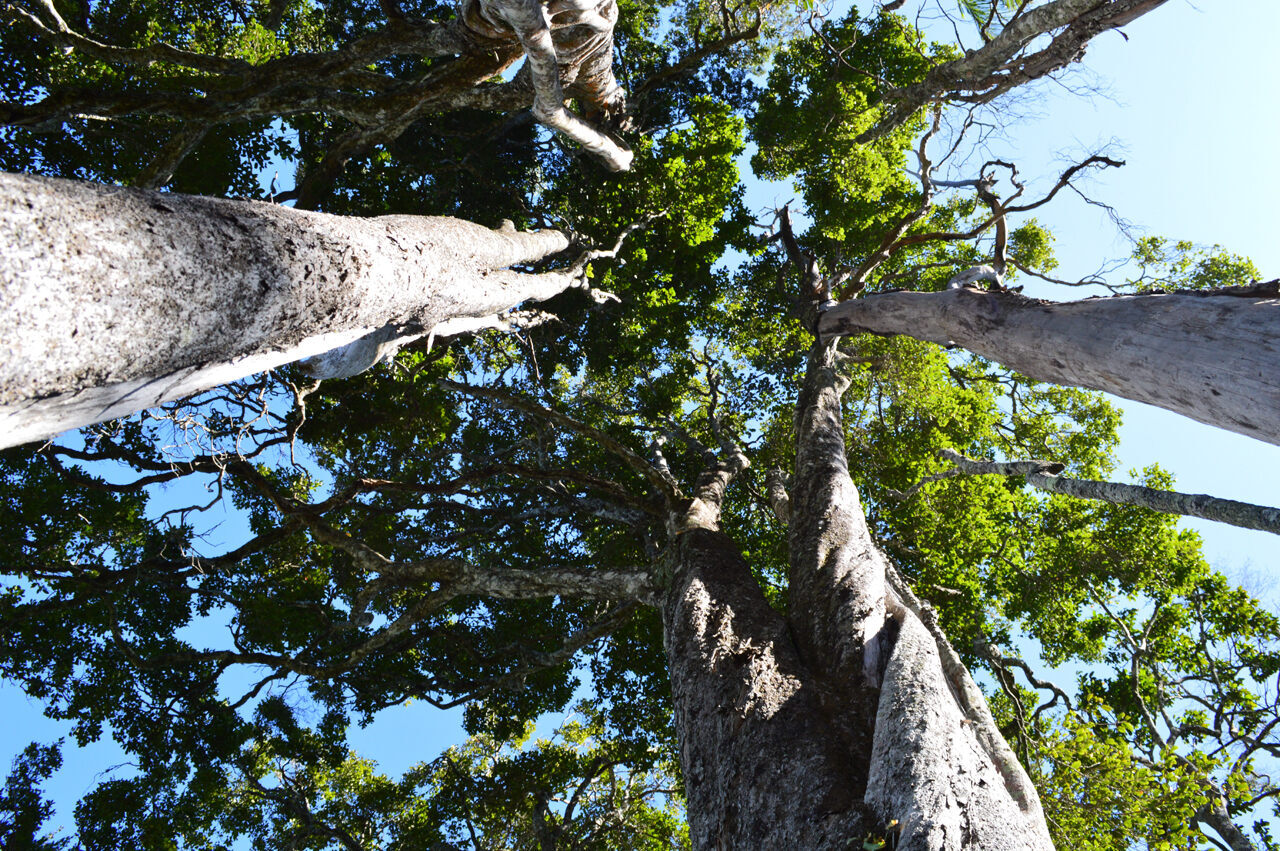 In gallery forests, sohisika may attain a height of around 60 feet and a diameter of about three feet. James Lucas
In This Story
Destination Guide

At first, the fire didn’t look like much of a threat. It was October 2014, the end of the dry season in central Madagascar, 100 miles north of the capital city of Antananarivo. The hillsides of this area are as dry and grassy as the golden hills of California, but slash-and-burn agriculture is a part of daily life. So when smoke rises on the horizon, no one thinks much of it. Locals certainly don’t expect it to threaten nearby homes, or the town’s most precious resource: sohisika trees.

The sohisika is not a valuable tree, nor is it culturally significant, but it is incredibly rare. Generations ago, it would have been found in forests all across this part of Madagascar. Today, the 230-acre park known as Ankafobe Forest is home to the world’s last wild sohisika trees. But during that 2014 fire, the species was almost wiped out—and would have been, had it not been for two hundred local people, armed with buckets of water, who fought a dramatic, two-day battle for the survival of the species.

On a dry, hazy day in early August, a young man named Ando Andriantsalohimisantatra stands on the slopes of a gully in Ankafobe, facing south. Bare, rolling hills stretch out in front of him. “The fire came from that direction,” says Ando, who is secretary of the conservation association formed to protect the forest, as well as the local lemur monitor. Ando is arrestingly tall and lean, with a relaxed gait and slow grin, and he strides smoothly over the grassy slope. He is with his friend Tahiry Rivoharison, a self-taught botanist and forester.

It is not hard to imagine the fire: Several other blazes are visible on the horizon today. Fire here is a way of life. For generations, farmers have burned forests to harvest charcoal, and to grow whatever they can on the land left behind. When the land gives out, they move on to the next forest. It’s destructive and short-sighted, but in the absence of fertilizer, it’s how many farmers survive.

Today, what was once mostly forest is grassland as far as the eye can see. The Ankafobe Forest rises out of the plain landscape like something out of The Lorax, the book by Dr. Seuss about the disappearance of the fictional Truffula tree. Ankafobe is only a third the size of Central Park, but inside, the forest is lush and green, with three species of lemur, including the endangered fat-tailed dwarf lemur. And, of course, the sohisika tree.

“It’s like a fossil landscape,” says Chris Birkenshaw, a botanist with the Missouri Botanical Garden who led the project that rediscovered the tree in 2004. “The forest is as a vestige of a landscape that was certainly more extensive in that area before.” He estimates that there are about 160 mature trees left.

In 2004, a biologist named Mamisoa Andrianjafy, who was working with Birkenshaw, stumbled across the sohisika, which is pronounced “swiskah.” It’s a stately, white tree with long branches, and it lives on slopes along forest edges. As forests recede, a sohisika can endure, often becoming the only tree on a hillside, like a stubborn child who won’t follow the class.

Unlike other plants in the forest, the sohisika isn’t useful for medicine, or building, or much of anything. In fact, when it was discovered, locals barely recognized it. But it was among the rarest trees in the world, so the Missouri Botanical Garden offered to pay to preserve it. A cadre of locals jumped at the chance at jobs, and perhaps the potential to attract a few curious tourists. For a decade, they worked building nurseries, planting trees, and scouring the region for other plants. Then the fire came.

It came from the south, but at first no one paid much attention. By late morning, forest monitors were getting alarmed. The fire was moving toward the trees, and fast. Men from the four surrounding villages converged to battle the fire, which approached quickly along a ridgeline to the west. They fought the blaze along a firebreak, tamping out the embers that jumped over.

For a moment, Ando and Tahiry recall, it looked like the fire would miss the forested valley altogether. But powerful fires can play havoc with wind, causing hot air to pivot and twist. According to the people who were there that day, a tornado-like whirlwind sprang up and threw embers high into the air, over the break and toward the head of the valley. The fire had entered the sohisika forest.

“When the fire was outside the reserve, only men fought the fire,” says Jean-Jacques Rosolofonirina, president of the conservation association Vondron’ Olona Ifotony Sohisika. “But once it was inside, we called everybody.” About 200 men and women formed lines up and down the hillsides, passing buckets from hand to hand, fighting the fire. Below them, what was a six-foot fire had become a 30-foot blaze. “You had to be careful not to look straight at it,” says Ando. “It would burn the beard off your face.”

Even for seasoned firefighters with trucks, planes, and firebreaks, it can be hard to fight back a crown fire like this. For a handful of villagers with buckets and handheld rubber slats, called flappers, it was nearly hopeless. The fire worked its way through the forest, ravaging everything in its path. The animals, already trapped by deforestation, had nowhere to run. “We heard the voices of the lemurs screaming,” Ando says. “Later I found their skeletons.”

For two days and two nights, the villagers fought the fire. In many ways, it was a defining moment for the community. Four villages surround Ankafobe Forest: Firarazana, Andranofeno, Ampitambe, and Andranorovitra. Each has its own character and history, but Andranofeno occupies an especially thorny place in local politics—many of its inhabitants are former city slickers who were given land in an effort to curb overcrowding. Most of the conservationists come from there, and their presence wasn’t always welcome, according to Birkinshaw. Yet here they all were, united in an effort to save a tree that was barely known just 20 years earlier. “Two hundred worked day and night, passing water pails down a line,” says Tahiry.

Tahiry and Ando lead the way along a hillside, above the site of the final confrontation with the blaze. Tahiry is Rocky to Ando’s Bullwinkle: He’s short and strong, with sharp movements and a quick smile. Highly motivated and passionate about plants, he has traversed the entire landscape on his bicycle, searching for novel plants and collecting seeds. Both are in their late 20s and came to conservation as students who grew up learning about sohisika trees in school.

Ando says that at one point, he thought they would never beat the fire—that it would consume all the sohisika trees, and their livelihoods with it. “The two nursery men cried a lot. Because they had a nursery with 50,000 plants that died,” Tahiry says solemnly. Rural Malagasy men are expected to be stoic, and he looks a little uncomfortable talking about his colleagues weeping.

The forest of Ankafobe straddles a small drainage ravine, and the fire was tearing down the slopes toward the stream. On the second night, the firefighters made their last stand along the water. The dense trees and moisture stalled the blaze, and finally it slowed. It had consumed 80 percent of the sohisika in one forest, but it hadn’t jumped to a second grove. The trees would survive on the brink of extinction. “We knew that we had won when we were close to the river,” says Ando. “I didn’t believe we could stop the fire. I was astonished and happy.”

No one cheered. There was no celebration. “I didn’t feel tired, I just felt happy because the fire was stopped,” Tahiry says. “But then when I got home, I just collapsed into bed.”

When Birkenshaw arrived with other scientists a few days later, the devastation was shocking. “It did look awful. It was stunningly bad,” he says. It wasn’t just the damage—it was also the possibility of erosion where trees no longer held the soil in place. Plus, the fire would attract people looking for charcoal, a major source of fuel in Madagascar. The chances of maintaining this fossil ecosystem seemed small. Birkenshaw considered the possibility that the sohisika tree might not be savable. He remembers telling locals, “If you’ve had enough, now is the time to stop. It’s okay.” But they wouldn’t have it.

“They were really shocked that I would even suggest that,” Birkenshaw says. “They were quite insistent. There was no question of stopping.”

Since 2014, the community has rebuilt the nurseries, which are brimming with native plants, including sohisika. They have beefed up the fire breaks and sunk barrels of water at regular intervals along the edges of the forest. Inside the park office, they have stockpiled flappers and spray cans. They are also experimenting with green fire breaks—bands of fire-resistant plants—outside the park. Occasionally tourists even show up to see the sohiskas and plant a few native trees. Ando says the lemurs are doing well, and even leaving the tiny forest to mate occasionally. Tahiry still hops on his bike and crisscrosses the region looking for new plants.

Birkenshaw says that the community’s response to the fire was inspiring to him, as someone who studies endangered plants that rarely get the attention of their animal counterparts. “I was really quite surprised,” he says. All this time, he goes on, “I thought that it had been us motivating them.” Ankafobe’s conservation spirit grew out of the community. It started as a spark of curiosity and has grown into a towering blaze far larger than the ones that threaten the forest.

Conservation has given locals something even more precious than a few critically endangered plants. “We are considered like heroes,” says Rosolofonirina. “Before, nobody knew about this place. But after the sohisika tree was discovered, we had pride.”

This project was supported by a storytelling grant from the National Geographic Society.

How a Tiny Plant Made a Big Comeback in West Virginia

The running buffalo clover may soon be removed from the endangered species list.
forests

Long after the forest stops burning, the effects of this year's fires will linger in the soil and water.
islands

The state has some strict standards to be named an exceptional tree, and competition is pretty stiff.
forests

Where Are Europe's Last Fairytale Forests?

Mapping the oldest and least-disturbed tracts of trees is easier said than done.
Video • Object of Intrigue

They're older than Christ and as high as the heavens.
Read more
Thanks for sharing!