The Archaeology of Those Weird Metal Things That Open Your Soda Can - Atlas Obscura
Want to see fewer ads? Become a Member. 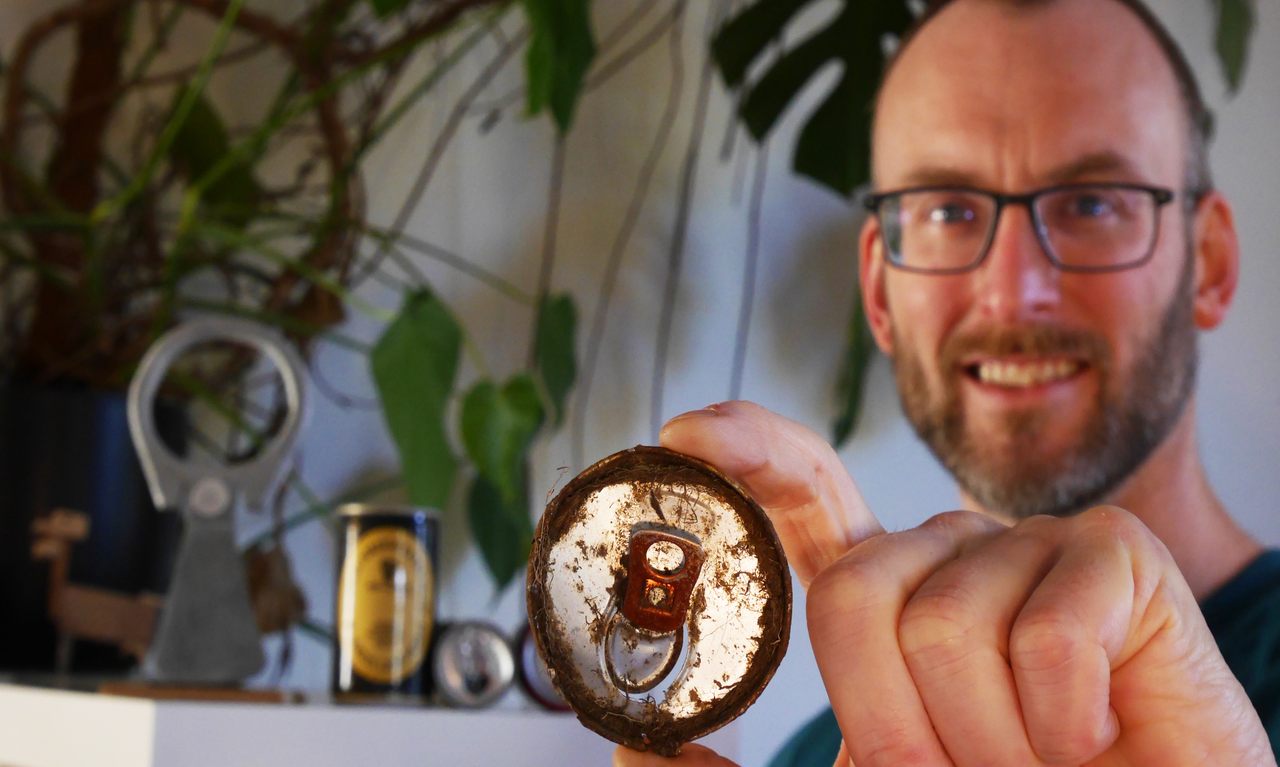 Jobbe Wijnen, a contemporary archaeologist in the Netherlands, is a pull-tab connoisseur. Courtesy Jobbe Wijnen
In This Story
Destination Guide

Jobbe Wijnen keeps his collection organized. That’s what any typologist must do with their most precious material—the cache against which all other finds are measured. Museums around the world are careful with their invaluable type specimens—the individual examples that embody and define a species’ characteristics and help researchers determine whether, say, a leech they find in their fieldwork is thrillingly new to science or the cousin of one floating in a jar inside a museum cabinet.

Wijnen is working to amass a reference collection of scores of types, so that any researcher following in his footsteps can examine what they’ve found and slot it into the appropriate place on the taxonomic family tree. Yet unlike some of his peers, Wijnen doesn’t need any jars, preservatives, or cabinets: His specimens are small, and designed to be sturdy. The representatives of the 70-plus types he has recorded so far are cradled in plastic sleeves—the kind a coin collector might use to store her loot. They fit easily inside a leather binder about the size of a photo album.

Wijnen’s collection suggests that he is probably the world’s most passionate and rigorous collector of pull tabs—those humble little things that help you crack open anything from tins of fish to cans of beer.

The whole concept of Wijnen’s project, which he calls Pull Tab Archeology, started out as a joke. By trade, he’s a contemporary archaeologist, studying the physical evidence that humans have left behind over the last several decades. Instead of plumbing the ground for items that have been there for centuries, or even millennia, he focuses on things that have only been around since the 20th or 21st centuries.

In the Netherlands, where Wijnen lives and works, many archaeologists had long swooned only over things that are well and truly old, he says, and hadn’t been especially keen on newer finds. Until fairly recently, he adds, anything more recent than the medieval period wasn’t particularly alluring to old-school archaeologists. But in the past few decades, archaeologists began doubling down on their efforts to excavate World War II–era sites. “It was completely a new duck in the pond,” says Wijnen.

About 10 years ago he was excavating some World War II–era trenches around the Grebbeberg—a hill in Rhenen that was the site of a bloody defense against German forces—and found that the top layer of soil was littered with pull tabs. Over the next few years, he started facetiously kicking around the notion of collecting as many as he could, and seeing how they stacked up against one another.

As he did, he realized that he had hit on a solid idea. “I started to realize, ‘Whoa, this is not just a joke,’” he says. “There’s much more to learn here than I would have expected.”

Though archaeologists probably wouldn’t throw in the trowel on honest-to-goodness treasure, many also realize that trash can be a goldmine, because the things we shed in the course of our daily lives offer unfiltered insight into what we buy and how we live.

“You could argue that trash is one of the things that make us human,” Rebecca O’Sullivan, a public archaeologist with the Florida Public Archaeology Network (FPAN), said on an episode of “The Materialists,” the archaeology podcast she co-hosts. “There’s truly nothing that archaeologists love more than garbage.”

Bits of trash are valuable snapshots of how people went about their days. As they cruised down U.S. Route 66, for instance, winding from America’s Midwest to California, drivers and passengers once lobbed cans, bottles, and the dregs of picnics out their windows. That trash accumulated in mounds just pitching distance from the asphalt, and researchers have learned much about midcentury recreation by taking stock of what those heaps held.

“It’s funny that someone would throw these bottles or cans out and not think that in 50 years they’d be in a museum somewhere,” William Parker, chief of science and resource management at Petrified Forest National Park (the only one that contains a segment of the old asphalt artery), told Atlas Obscura last fall. “As we progress through time, things are constantly becoming historic.”

Most people have probably handled a pull tab to crack open a can of soda or soup, and would recognize the object without having looked particularly closely at it. The metal gizmos all look somewhat similar—a bit like a freshly filed fingernail—but they have scores of subtle differences that point to the time and place they were manufactured.

Canned drinks really took off after the second World War, and over the next few decades, punch-top cans gave way to tabbed ones. Some pull tabs are single loops, like little rings that someone would stick a finger through; others, known as “Sta-Tabs,” were designed to push a tear strip into the can to create an opening, while the tab remained on the can so it didn’t wind up on the ground. Different tabs have different perforations, different angles, and slews of other other variations.

Wijnen is keen to get a handle on how different manufacturers’ styles have varied across time and place. “Two types that I know of—very early ones, called zip-tops and U-tabs—have never been produced in Europe, as far as I know,” he says.

Looking for something so mundane can turn out to be a little wondrous. Pull tabs are ubiquitous, but also easy to overlook—they blend into the background of the various bits of trash, debris, leaf litter freckling the ground. “It’s a silly thing that no one looks at normally,” Wijnen says. “But when you do, you start seeing them everywhere.”

He recalls one collaborator in Saratov, Russia, saying that he wanted to comb his neighborhood for tabs, but didn’t expect to find any there. “Then he went out to look for them,” Wijnen says, “and said, ‘Oh, my God—they’re everywhere.’”

Parks, schoolyards, and areas around restaurants or delis are often fruitful places for tab-hunting, Wijnen says. Some tabs, decades old, might suddenly be revealed again by a gust of wind. “Aluminum deteriorates very poorly,” he says. “[Tabs] stay in the environment for a long time.”

Wijnen says that before 2018, he was a bit of a lone wolf, prowling for tabs on his own, with occasional help from colleagues who would pass their finds on to him. Then, “in 2018, I said, ‘Let’s do it big time, and do it globally, and ask everyone in the world to send me the pull tabs they can find.” So far, he has amassed more than 3,060 tabs.

“Suddenly I get an envelope in my mailbox from Taiwan or Shanghai or Australia or Texas,” he says, “and I never would have found them myself because I don’t have time or money to travel.”

Ideally, these donated tabs come with beautifully precise location information, down to an address where they were collected. That allows Wijnen to map them all.

(One note before you scoop up a bunch of old tabs: Different countries have different laws about what is considered historic, and under what circumstances something can be moved. It’s a good idea to look into the regulations where you are, lest you violate a heritage law.)

If you can participate, Wijnen hopes you will. “I want people to know that it’s an interesting topic if you look closely at it,” he says. Trawling for these little metal bits of the past, he adds, is a way of connecting with stories that are often mainly accessible to people with credentials and equipment.

“I like the idea that this is a kind of archaeology that everyone can do for themselves.”

An old dump beneath the airport on Michigan's Mackinac Island was brimming with stories from summers past.
national parks

Bottles, cans, and more can reveal a long history of industry, recreation, and shenanigans.
garbage

More than a year into the pandemic, scientists are seeing the impact of disposable gloves and masks on ecosystems.
List

Proof the Dutch can convert nearly anything into a place to stay the night.
List

If you own your property, why not bedazzle it?
Video