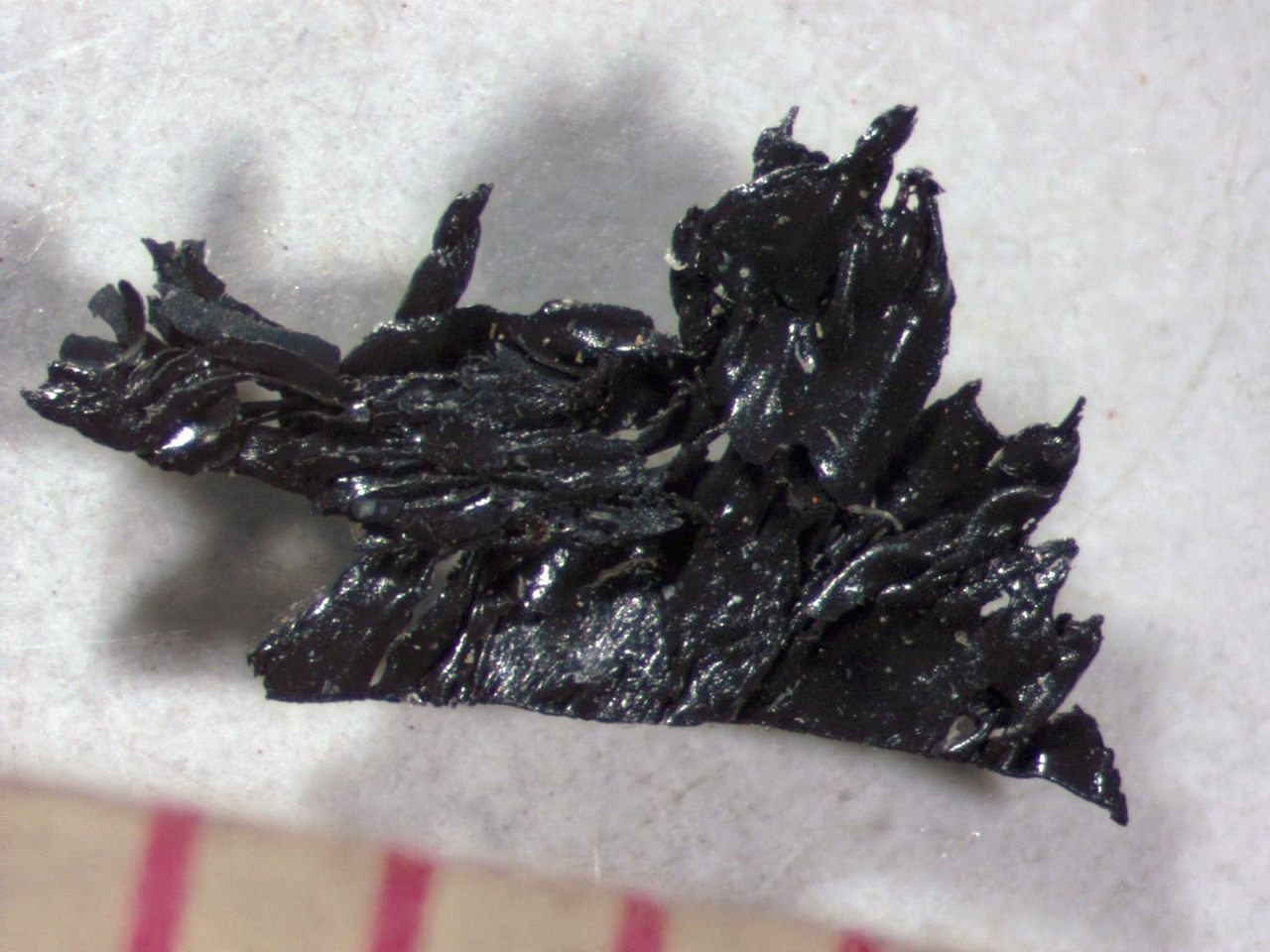 The black material found on the final page of Brønlund's diary. Kaare Lund Rasmussen/SDU
In This Story
Destination Guide

Nearly a century after a tragic Arctic expedition secured a portion of Greenland for Denmark, a final diary entry by one of the explorers has offered up a clue to how he spent his last, frigid moments. The secret lay in a mysterious spot of dark material stuck to the page, rather than in the words themselves.

“No food, no foot gear, and several hundred miles to the ship,” wrote Jørgen Brønlund, the last survivor of a three-man sledge team that perished in 1907 during the Denmark Expedition to survey far northeastern Greenland. The men were attempting to return to base camp in Danmarkshavn when delays forced them to summer in a fjord and await the return of ice and snow more favorable for dog sledge travel. They were, however, already critically short of food and supplies.

Crippled by hunger and exhaustion when they resumed their trek in the fall, Brønlund’s companions, Niels Peter Høeg Hagen and expedition leader Ludvig Mylius-Erichsen, died that November within days of each other. Brønlund, an Inuit native of Greenland, managed to walk another 15 miles to a depot that had been prepared ahead of time at Lambert’s Land. There he sought shelter in a cave, but could go no farther due to frostbite and darkness. His body was found four months later, along with his diary, holding the tell-tale black material on the last page.

“This story is something every Greenlander knows about,” says chemist Kaare Lund Rasmussen, lead author of the study in the journal Archaeometry, and whose team at the University of Southern Denmark specializes in the analysis of cultural artifacts. “This was the terra incognita at the time. It became the Moon and Mars later, but back then it was the polar expeditions that people were waiting to hear about.”

Brønlund’s diary and Hagen’s cartographic drawings preserved the work of their expedition, which helped settle the question of whether Peary Land—a vast area explored by American Robert E. Peary for the first time around 1892—was a peninsula or an island. In showing that it was peninsula, the expedition affirmed Denmark’s claim to the land, rather than, potentially, America’s.

A search party found Brønlund’s body in the spring of 1908, with his diary and Hagen’s sketches in a sledge bag at his feet. “I reached this place under a waning moon, and cannot go on, because of my frozen feet and the darkness,” he wrote in the final entry. “The bodies of the others are in the middle of the fjord.”

The journal was taken to the Royal Library in Copenhagen, where, in 1993, a reader removed (without permission) a tiny black spot beneath Brønlund’s signature with a pocketknife, according to the study. The material, described as having a “fine fibrous and twined structure,” was submitted to the National Museum of Denmark, where Rasmussen worked at the time. “We couldn’t figure out what it was—we didn’t have the technology to do it then,” he recalls.

Twenty-five years later, in 2018, he tried again. Because the amount of material left was so miniscule—roughly half the size of a grain of rice—the researchers had to use advanced machinery at CERN in Switzerland, among other techniques, to analyze it, Rasmussen says.

The results indicate that the black material is likely mostly charred natural rubber—perhaps a rubber gasket or waterproof fabric that Brønlund somehow burned while trying to preheat his stove with other materials, the study concludes. (Though Brønlund still had petroleum, it would have gelled in the extreme cold, requiring initial heat to liquefy it, says Rasmussen.) This would have been a difficult task, given his extreme cold, hunger, and fatigue. Traces of fish or animal fat and vegetable oil suggest what Brønlund might have been attempting to use as fuel. The analysis also indicated the presence of feces.

Brønlund’s Lux stove, a kerosene container, and other personal objects were recovered in 1973 by the Danish Army’s Sirius Patrol, which still occasionally crosses the extremely remote and forbidding region on dog sledges. Of course the paper in Brønlund’s diary also could have served as kindling, though he probably would never have considered that as an option.

“I think the diary was something he knew other people would read, so he would preserve that by all means,” says Rasmussen. “Just think of it: He realized he would die very soon, and he really protected his diary and the information they had gathered. You could say that the acts of Brønlund meant the expedition was fulfilled in a way, because the information got back.”

Since their discovery more than 60 years ago, the "Fishbones" tunnels beneath the French city have been an enigma.
Video • Object of Intrigue