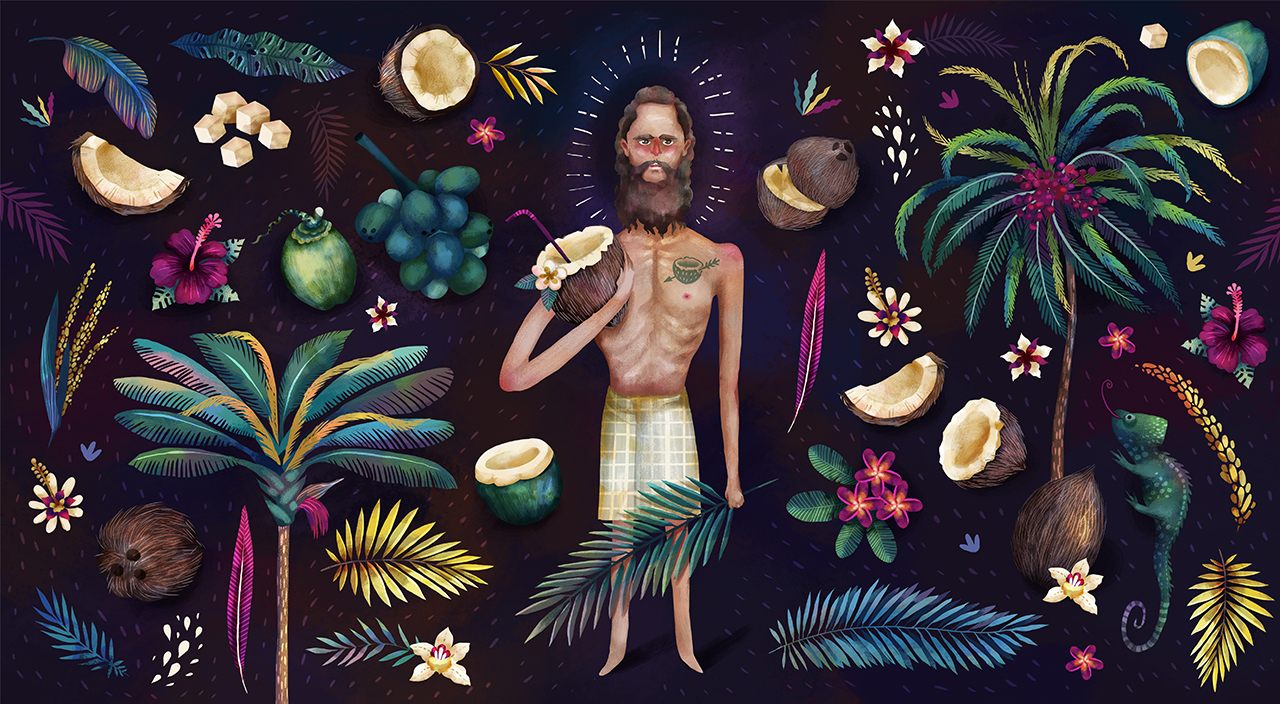 In 1902, a student named August Engelhardt set sail from Germany with a suitcase full of books and a peculiar mission: to establish a new Edenic order on the sunbaked shores of Papua New Guinea. Paradise, he knew, existed on earth, somewhere along the equator, and the key to happiness was simple: Abandon your earthly possessions, move to a tropical island, become a nudist, and eat only coconuts.

From his newly purchased island home, Engelhardt established a cult called Sonnenorden, or the Order of the Sun: a religion that revolved around worshiping the sun, which he saw as the ultimate giver of life, and coconuts, which he believed to be the tropical transubstantiation of God’s very flesh. As Christian Kracht, the author of Imperium, a fictional account based on Engelhardt’s life, puts it, “To Engelhardt, the sun and God and the coconut were much the same indivisible holy entity, much as the trinity of Father, Son, and Holy Ghost are one and the same in Catholicism.”

The precepts of Sonnenorden are meticulously outlined in Engelhardt’s collection of writings, entitled, A Carefree Future: The New Gospel, which he co-authored with his friend, August Bethmann, four years before setting out for the island. A Carefree Future dwells obsessively on the coconut; page after page is filled with wild theories that extol the virtues of the fruit and adoring, devotional poems with titles like “The Coconut Spirit” and “How to Become a Coconut Palm.” One poem, entitled “Mother Coconut,” begins, “Coconut, noble princess and benevolent mother of men, Likeness of God you are, and divinity in shape of a plant.”

The crux of Engelhardt’s coconut obsession was rooted on a thin observation: The coconut, with its spherical shape and furry shell, is the fruit that most resembles the human head. Therefore, it is the most ideal fruit for man’s consumption. “We can expect from God that he created our food in the shape of our heads,” Engelhardt reasons. Coconuts are “vegetal human heads, and they alone are the proper human nourishment.”

Despite Engelhardt’s aspiration to spread his new gospel of cocovorism, his cult attracted only a handful of followers. In total, no more than fifteen German disciples joined Engelhardt in a life of quiet island devotion. Together, they sun-bathed for hours a day, swam in the cool waters of the Pacific, and ate their holy fruit.

Engelhardt’s ideology, though radical, was born of more mainstream philosophy sweeping through Germany in the late 1800s. Disillusioned with the state of society in Victorian-era Europe, a collective of writers propagated a movement called Lebensreform, or life reform, a philosophy considered to be the ideological forbearer of the hippies and the modern day organic food movement. Proponents of Lebensreform believed that men should live close to nature, eat strict vegetarian diets, abstain from tobacco and alcohol, and be nudists.

But Engelhardt’s cult was short-lived. As it turns out, paradise is not without its perils, nor can man live on coconuts alone. A sensationalistic 1905 account from the New York Times describes the fate of two of Engelhardt’s followers, a student named Heinrich Eukens and orchestra director Max Lützow, who died shortly after joining Engelhardt on the island.

Throughout the course of the next few years, several more of the cult’s followers, unaccustomed to the warm climate and stringent coconut diet, died or contracted malaria. Engelhardt, too, grew seriously ill. Despite his recovery, the cult disbanded of its own accord; disenchanted with the disastrous realities of the New Eden, the remainder of the group returned to Germany. Engelhardt blamed his follower’s illnesses on their deviation from the coconut diet — it was the sweet tropical fruits they had consumed in addition to coconuts which made them ill, he reasoned.

In response to the cult’s ruinous outcome, the German government issued a stern warning, banning any more prospective followers from joining Engelhardt on the island. Engelhardt was left alone, scribbling lengthy treatises on the healing powers of plants and studying the dietary habits of the island’s natives. He was an emaciated nudist, treated as something of a solitary sideshow by visiting tourists who would occasionally ask him to pose with them for photographs.

There’s little known about the fate of Engelhardt himself. It is widely assumed that he died in his mid-40s, nearly seventeen years after setting foot on the island. While no trace of a gravesite or memorial remains, his body is believed to have been discovered on the shores of Papua New Guinea in May of 1919, his legs riddled with ulcers. At the time of his death, Engelhardt weighed only 66 pounds.

It might be easy to dismiss Engelhardt as a domineering madman, a deranged eccentric, or a maniacal cult-leader. But, according to Kracht, he’s a character who, in some ways, begs our sympathy. Kracht, who discovered a tome of Engelhardt’s diaries in a New Zealand library, says that Engelhardt writes of a deeply unhappy childhood and physical abuse from his parents. As an adult, Engelhardt was a shy and insecure man who believed he was ugly and hopelessly awkward around women. Kracht sees Engelhart as an artistic, misled visionary, who hoped to transcend the limitations of inflexible Victorian society. And, in some ways, Engelhardt’s legacy lives on: It’s difficult not to draw parallels from Engelhardt’s story to the occasionally fanatical organic and locally-sourced food movements of today.

“The hipster’s credo is directly descended from Engelhardt’s world view,” says Kracht. “So he is vindicated, in a small way, a century later.”

The Designer Who Makes Dessert Come to Life

Experience desserts that move and a record made of chocolate.
health foodhippiescoconutcultshealthfood

Before Avocado Toast, There Was Snowflake Toast

From Fruitlands to NXIVM, food has served as the core of Utopia and a tool of control.
food