For the Madagascan Aye-Aye, the Rule of Thumb Comes in Two - Atlas Obscura
Want to see fewer ads? Become a Member. 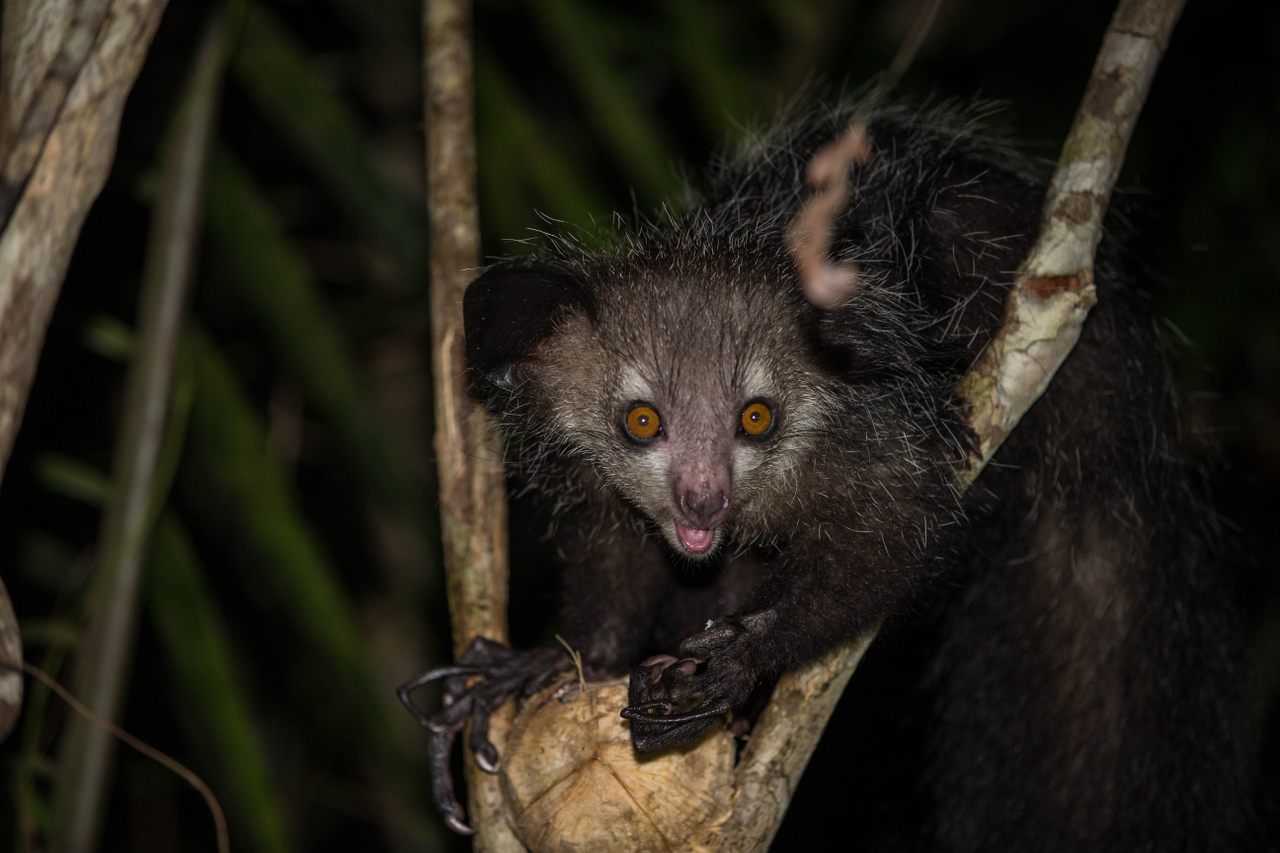 It's an aye-aye surprise! Madagascar's battiest lemur is the only primate with four thumbs. Oregon State University & Nomis Simon / CC BY-2.0
In This Story
Destination Guide

In the small hours of the night in the jungles of Madagascar, nightjars croak in the canopies, and hordes of chocolate-colored cockroaches skitter through the undergrowth, hissing as they go. Somewhere in between the forest floor and the treetops, a rapid tapping reverberates from a rotten branch. The bug-eyed aye-aye is hunting, using its echolocating ears, its skeletal fingers, and its thumbs—all four of them.

“The aye-ayes have absurd hands,” says Adam Hartstone-Rose, an evolutionary biologist at North Carolina State University who specializes in primate morphology. “Their hands are crazy. They almost look like bat fingers. They’re so long and so thin.”

The aye-aye is a type of tree-carving lemur that’s nominally impossible to understand—a platypus of the trees. Its hand makes up 41 percent of its forelimb; for a human, that would be like having a foot-long mitt. When the French naturalist Pierre Sonnerat described the primate in 1782, he suggested that its name—as spoken by locals—was derived from the sound people would make when they saw it.

Though Sonnerat was wrong, it’s possible that the name is derived from “heh heh”— Malagasy for “I don’t know,” and a pretty on-the-nose indication of how humans understand the animal. Which is why in October 2019, when dissections of the aye-aye revealed extra thumbs on each of its hands, Hartstone-Rose was nonplussed.

“The muscle you need to hitchhike—that muscle—as it passed the aye-aye’s wrist, we found most of it did go to the thumb, but some of it went to a different place,” he says. “The wrong place.”

Hartstone-Rose studies primate forearms. Specifically, he looks at how different muscles are strung together, and uses the anatomy to figure out how apes, monkeys, and lemurs may have adapted for life in the trees or on the ground. He’s dissected hundreds of primates over the years, and has always wanted to examine an aye-aye. But specimens are hard to come by.

Last fall, however—“thanks to unfortunate circumstances,” Hartstone-Rose says tactfully—a few captive aye-ayes and one wild specimen died of natural causes, and were made available for scientific inquiry. Probing the specimens, the research team made a surprising find, published last fall in the American Journal of Physical Anthropology: a strange protuberance of cartilage and bone on the hand, with the capabilities of an entirely separate digit.

“The way I think of it working is like, if you had a golf ball, you could pick that up just by using your palm,” Hartstone-Rose says. “The aye-aye has that, but to the nth degree.”

The aye-aye’s “pseudo-thumb” acts to counterbalance the slender, delicate fingers on the opposite side of the lemur’s palm, which are capable only of light lifting. Yet those fingers are a perfect evolutionary tool for the animal’s unique hunting style. When aye-ayes find grub-riddled tree limbs, they use their hearing to locate the transects that insects have made inside. Then they create a sort of mental map of the tunnels in the wood, and use their ever-growing teeth to puncture the limb at the tunnels’ intersection, and their extra-long middle finger to scoop out the wriggling morsels inside.

For a human, it’d be like having a finger that’s over five inches long—probably not bad for backscratching.

“Although they have these amazing hands that enable them to do this … that means their hands are no longer good at doing [regular] ‘hand stuff,’” Hartstone-Rose says. “We think that the pseudo-thumb evolved in order to compensate for that very specialized finger.”

The aye-aye’s pseudo-thumb has its own fingerprint—akin to the unique whorls the human hand has where the base of the pinkie slightly protrudes from the palm. Hartstone-Rose’s team found these prints even on a neonatal aye-aye, suggesting that they originate by birth.

Aye-ayes are the only known primate with a pseudo-thumb, but they aren’t the only famous mammal that has one.

“The same [evolutionary split] happened with bears,” Hartstone-Rose says. “[O]ne lineage of bear ended up doing something no self-respecting bear should do. They started eating bamboo.”

The giant panda’s pseudo-thumb developed as an additional wrist structure to support its iconic diet. Just as humans became bipedal, and an opposable big toe on the side of the foot gradually moved forward to become the sedentary big toe we know now, so too did most bears have their extra digit subsumed into the rest of their foot structure.

As improbable as aye-ayes are, their complex anatomy gives them a unique set of skills for surviving in the jungles of Madagascar. Perhaps, if we’re lucky, more mysteries of this mysterious animal remain to be discovered—and will keep us saying “aye-aye” far into the future.

Oversized, fluffy rodents in the Philippines may have been hunted by our evolutionary cousins.
art

Life finds a way.
Want to see fewer ads? Become a Member.
From Around the Web
THE GASTRO OBSCURA BOOK
Taste the World!
An eye-opening journey through the history, culture, and places of the culinary world. Order Now