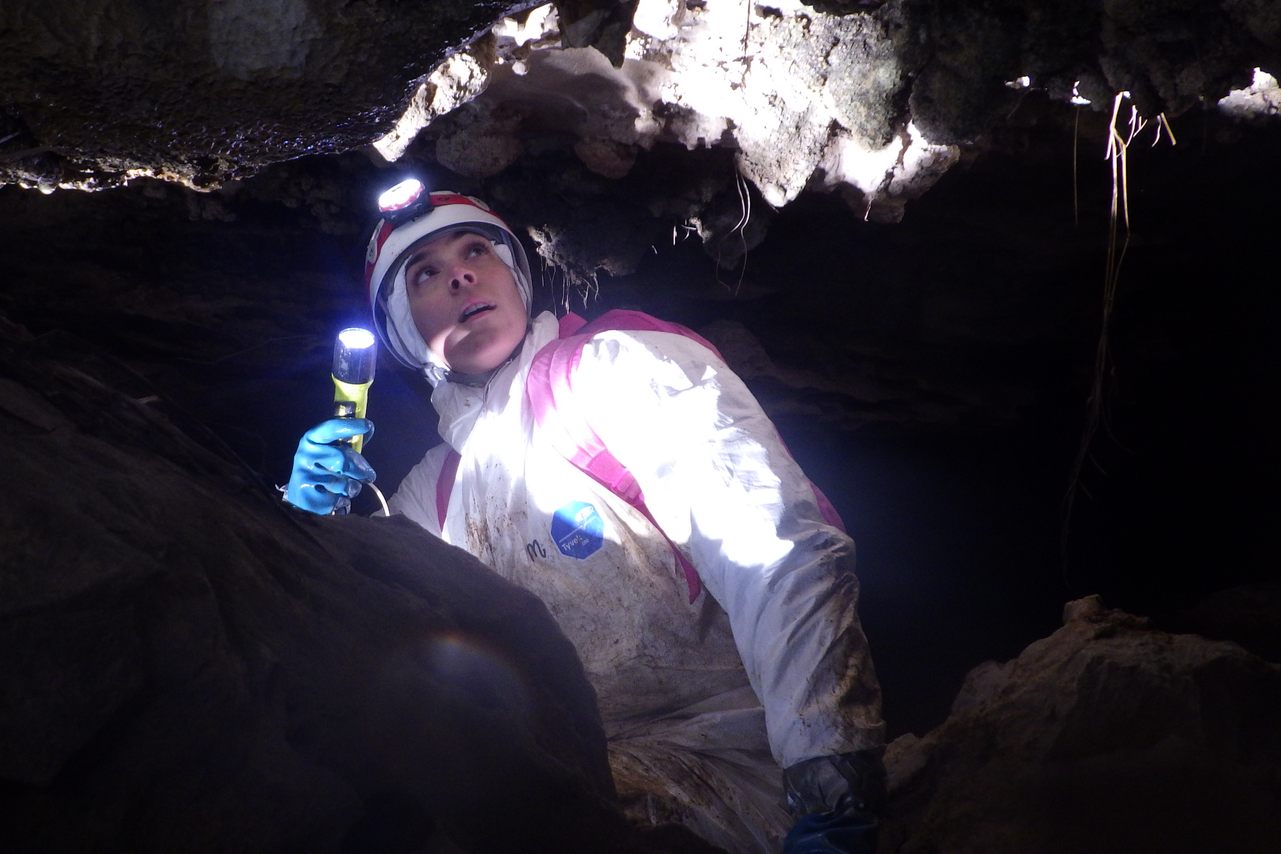 In 1799, a boy named Conrad Reed found a 17-pound hunk of gold on his family’s farm in Cabarrus County, North Carolina. Reed’s discovery launched the first gold rush in the United States, inspiring dozens of mines tunneling deep into the earth. They were productive for a while, but after news broke that someone had struck gold in California, many prospectors abandoned the mines and headed out west. Now, more than two centuries after Reed’s discovery, these mines have taken on a second life as dank bat habitats.

For most bats, life in a gold mine—dark, cold, and humid—is pretty much paradise. But the bats living in North Carolina’s gold mines are in danger. Researchers have detected evidence of the fungus that causes white-nose syndrome, which can drive bats to madness and death, in populations living in 12 mines throughout the Piedmont region of North Carolina. Most bats aren’t yet infected, but they could be very soon. “You tend to see the fungus first and then, a few years later, you see infected bats,” says Katherine Caldwell Etchison, a bat biologist with the North Carolina Wildlife Commission. “So we’re waiting and holding our breath.”

Etchison says there’s no telling when the bats colonized the mines. They may well have been around since the mines were first abandoned in the 19th century. As it turns out, gold mines are exceptional surrogates for the caves that bats use as hibernacula, or places to overwinter and hibernate. In North Carolina, natural caves run pretty small. “Most of the time, it’s a little more than a rock shelter. You have to army crawl and drag your legs behind you,” Etchison says. So with the gold mines, the bats of the Tar Heel state found a new and palatial roost.

After Conrad Reed struck gold, more than two hundred years ago, his family used the large nugget as a doorstop—until his father John Reed took the nugget into a wily jeweler, who bought it for $3.50, according to a blog post from the University of North Carolina’s library. Reed soon recognized his mistake and opened up the first commercial gold mine in the United States. Within a year, an enslaved person named Peter would find a 28-pound nugget.

Etchison, who was born in the county where Reed struck gold, was floored when she discovered this story. “This guy paid $5 or something ridiculously low for this huge gold nugget!” she says. “What a way to be ripped off.”

As a bat biologist, Etchison rarely encounters anything historical in her work, and never knew the Carolina Gold Rush was the first to hit the nation. So the American legacy of these bat habitats excited her. “That first huge gold nugget drew people from all around the world to North Carolina,” she says. Skilled copper miners from Cornwall, England came to seek their fortune in the South. During peak years, gold mining employed more North Carolinians than any other profession except for farming, according to the UNC blog post. The state became the largest gold-producing state in the U.S. until 1848, when California entered the fray. “It just didn’t last long,” Etchison says. “And now bats use them.”

In 2014, biologists with the North Carolina Wildlife Resources Commission began conducting a survey of the bat populations living in the mines (Etchison joined the project later on). White-nose syndrome breached North Carolina in 2011, and the researchers wanted to know how far it had spread. The project has expanded a little each year as the biologists identify new mines and, within them, new bats. They’ve surveyed 12 mines so far in the Piedmont, and hope to complete surveying the 30-something mines across the state in the next few years, Etchison says. There are fewer bats in each of North Carolina’s mines than there ever were in the caves, but the counts are stable, compared to mountaintop hibernacula that have seen 90 to 99 percent population declines since white-nose syndrome was first spotted.

The biologists conduct their surveys starting in December and ending in early March. Wintertime is the most opportune season to study bats, because the animals hibernate: It’s a lot easier to count dozens of immobile, upside-down bats in a mine than to try and capture the critters when they’re out and about in the summer, gorging on fruit.

Theoretically, gold mines are traversable by the average-sized person. But the majority of the Carolina’s mines are just vertical shafts into the earth, less than 50 feet deep and lacking any kind of supportive scaffolding, making an ordinary bat survey a pretty dangerous endeavor. Unlike caves, with their sturdy rock walls, mineshafts are drilled into a shaky mixture of dirt and stone. “We have to use our caution and very best judgment going down those,” Etchison says. Biologists often tie themselves to a nearby tree and rappel down into the pit. Etchison sometimes feels sediment raining down around her—a frightening reminder that the mine could give way up at any movement.

The only exception is the Reed Gold Mine, which stands out like a lord among peasants. John Reed’s commercial mine unearthed over 100 pounds of large nuggets before it shuttered in 1912. Now, the mine is a historic site that offers guided tours and a picnic area. So as one might imagine, surveying Reed’s bats is a similarly peachy experience. “They keep you on the safest part of the tunnels, and everything’s really reinforced,” Etchison says. “And caretakers will just tell you ‘don’t touch that wall’ before you even notice anything’s loose.”

Once within a mine, Etchison and the biologists will count the bats and record which species are present. Then comes the challenge. To check for white-nose, Etchison has to swab the face and forearms of every single hibernating bat, before the animals wake up. (It’s like the oddly-specific plot of an addictive iPhone game.) In caves, bats hang high over her head; in low-lying mines, the bats are practically at eye level.

There are many ways, too many, to wake up hibernating bats. Their hibernation is triggered by temperature, so a person’s body heat can wake them up. Then there’s the swabbing itself. “When you swab them, they swing like a pendulum back and forth, and then tend to fall off. After all, they’re only holding on by one toe.” To prevent bats from falling to uncertain depths, Etchison will hold her q-tip in one hand and hold her other palm below each bat. The light from her flashlight can also arouse the critters, so she shines her flashlight away from the bats as soon as she can.

White-nose syndrome, which was first detected in New York 13 years ago, has killed millions of bats. (It does not afflict humans.) The perpetrator is a European fungus, Pseudogymnoascus destructans, that thrives in cold, dank places. As the animals lapse into their long sleeps, the fungus begins to grow on the bat’s bodies. This growth irritates their skin, and so the bats often wake up to scrape their bodies, sapping the precious fat reserves they saved up for hibernation, Etchison says. Bats that fight the fungus often die of starvation before the abundance of spring comes. But for bats who don’t manage to wake up, the fungus can take root inside the body and become full-blown white-nose syndrome, causing bats to behave erratically and expend energy twice as fast as normal.

White-nose syndrome can be spread bat-to-bat and human-to-bat, so the researchers must take extraordinary precautions when they move between mines, Etchison says. The biologists wear scrub caps, gloves, and Tyvek suits—disposable plastic coveralls with hoods—with duct tape to seal any gaps at the wrist. After surveying a cave, the researchers strip in the frigid North Carolina weather, bundling their suits to be decontaminated in hot water.

In the Piedmont, the hardest-hit bats are the population of tricolored bats, one of the smallest bats in North America. Tricoloreds are named for their hairs that begin as black, shift into yellow, and end with brown at the tip. But Etchison’s team often encounters other species, such as the unhelpfully-named “big brown bats” and “little brown bats.” These vaguely descriptive names make the other part of Etchison’s job—house calls to people with a bat trapped in the kitchen or basement—difficult to assess. “They often describe it as a little brown bat,” she says. “But it’s almost always a big brown bat.”

Etchison is hopeful that white-nose syndrome won’t take root in the Piedmont mines. They’re located in a warmer area of North Carolina, which could discourage the cold-loving fungus from spreading fast. But until Etchison can conduct another survey this upcoming winter, she’s planning ahead. She’s already identified several more mines she plans to rappel down into the coming months. There’s no comprehensive list, and most of the mines dwell on private land, leaving Etchison to Google endlessly, dig into old newspaper articles, and go by word of mouth. She often cold-calls people and asks if she can inspect bats in their mines. “It’s just the greatest thing when some guy’s like, ‘Oh, there’s this mine down the road, just take a left,’” she says.

Etchison has one request that she cannot stress enough. If you or anyone you know has an abandoned mine in North Carolina, please let her take a look at your bats.

This year, we met creatures (and other living things) great and small, from the world’s largest organism to microscopic parasites.
animals

Kasanka National Park in Zambia hosts one of the largest and most mysterious animal migrations on the planet.
zombies

A creepy form of parasitism is one of evolution's favorite strategies, and scientists are starting to figure out how it works.
Video