For Sale: The Wooden Stage From The Beatles' First Concert - Atlas Obscura
Want to see fewer ads? Become a Member. 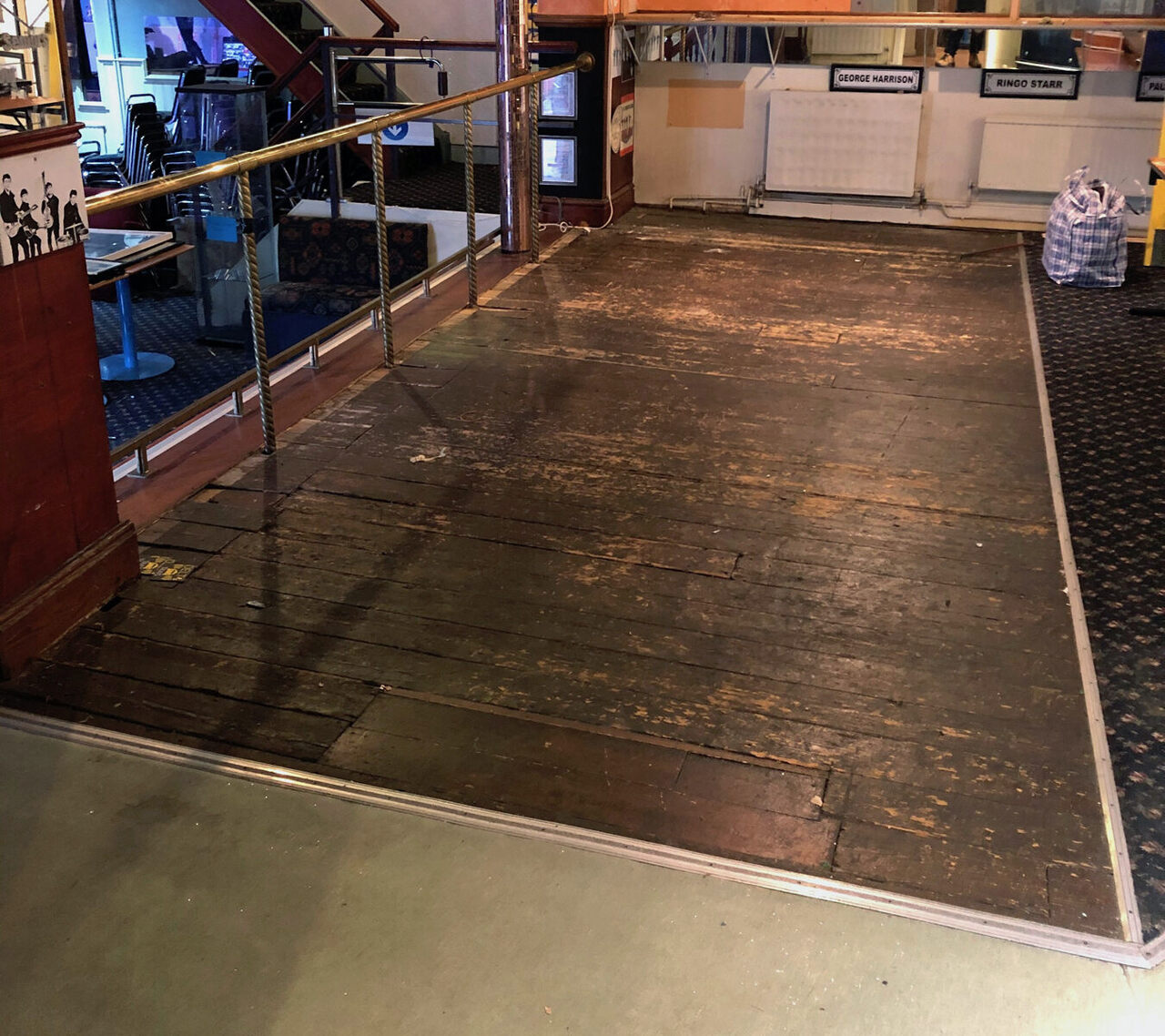 Where it all started. Courtesy Julien's Auctions
In This Story
Destination Guide

Lots of music appears to be emerging from the world’s windows and balconies, in some cases recalling The Beatles’ famous rooftop concert from 1969. Now some enterprising fan out there might be able to replicate the band’s very first concert—from almost a decade earlier—on the actual stage where they played.

On April 10, in commemoration of the 50th anniversary of the band’s breakup, California-based Julien’s Auctions will offer a slew of Beatles memorabilia (with live online bidding available), from the handwritten lyrics for “Hey Jude” to corduroy trousers worn by John Lennon himself. While it may not look so illustrious, this set of wooden planks pulled straight out of the floor are in fact witnesses to history, and a marquee item that could fetch as much as $20,000.

Like all matters of diehard-fan minutiae, the precise date of The Beatles’ first concert is up for debate. It depends how you define the band: Their origins date back to the late 1950s, when Lennon, George Harrison, and Paul McCartney played as a skiffle trio called The Quarrymen. This wooden stage from Liverpool’s Lathom Hall isn’t where they first played as that band, but it does predate the Fab Four as we know them. On May 14, 1960, the band performed as a quintet, with Stuart Sutcliffe on bass and Tommy Moore on drums, at Lathom Hall. (Ringo Starr didn’t get involved until 1962.) They had also not yet settled on their final name, and played the show as The Silver Beats. Neither Harrison nor McCartney had yet turned 18, and the young group walked onstage not just for their debut gig, but also to audition for local concert promoter Brian Kelly.

It went over well, and Kelly booked The Silver Beats to return to the Lathom Hall stage the following Saturday night. This time, he’d even put their name on the bill.

But, true to the spirit of rock ‘n’ roll, the band blew off the gig. When they were supposed to report for duty at Lathom Hall the following Saturday night, they were actually in Scotland, backing a singer named Johnny Gentle. They’d received the offer at the last minute—in between the first and second shows at Lathom—and neglected to tell Kelly that they’d accepted it.

And so The Silver Beats were basically fired, and forbidden to play any of Kelly’s venues for several months. By the time the promoter changed his mind and invited the band back to Lathom Hall—in a nod to their rising profile and burgeoning reputation—the group had already changed its name twice: first, to The Silver Beetles, and then to The Beatles. They played the Lathom Hall stage 10 times between January and February of 1961.

That venue, Lathom Hall, was founded in 1884 as a Victorian social hall. It later became a movie house, before it was converted into a dance hall in the 1950s. Over the subsequent decade, the venue became closely associated with the Merseybeat musical movement—essentially the early British wave of rock ‘n’ roll—named for the River Mersey that runs alongside Liverpool. Today, Lathom remains open as a Merseybeat-themed throwback bar. This stage itself reflects the building’s long history, measuring about 20 feet by 10 feet, with the original Victorian-era nails still peeking out of the planks, all of which are numbered for easy reassembly.

The Julien’s auction was originally slated to take place at the Hard Rock Cafe in Times Square, but the auction house has changed its plans in response to the COVID-19 outbreak. While the auction is still scheduled for April 10, CEO Darren Julien says that bidding will be remote, and that the auctioneer and phone operators working the room will all be distanced at least six feet apart from each other.

A celebration of freedom, published next to advertisements for the slave trade.
music

For Sale: A Wood-Paneled Console That Helped Shape Classic Rock

Bowie, Marley, Zeppelin, and more recorded on this piece of music history.
mathematics

Cagey about his methods, John Wallis was a bit of a cipher himself.
Video • Wonder From Home

The King kind of had a thing for cars.
Read more
Thanks for sharing!