How a Farmer's Hunch Led to a Lost Monastery and a Neolithic Surprise - Atlas Obscura
Want to see fewer ads? Become a Member. 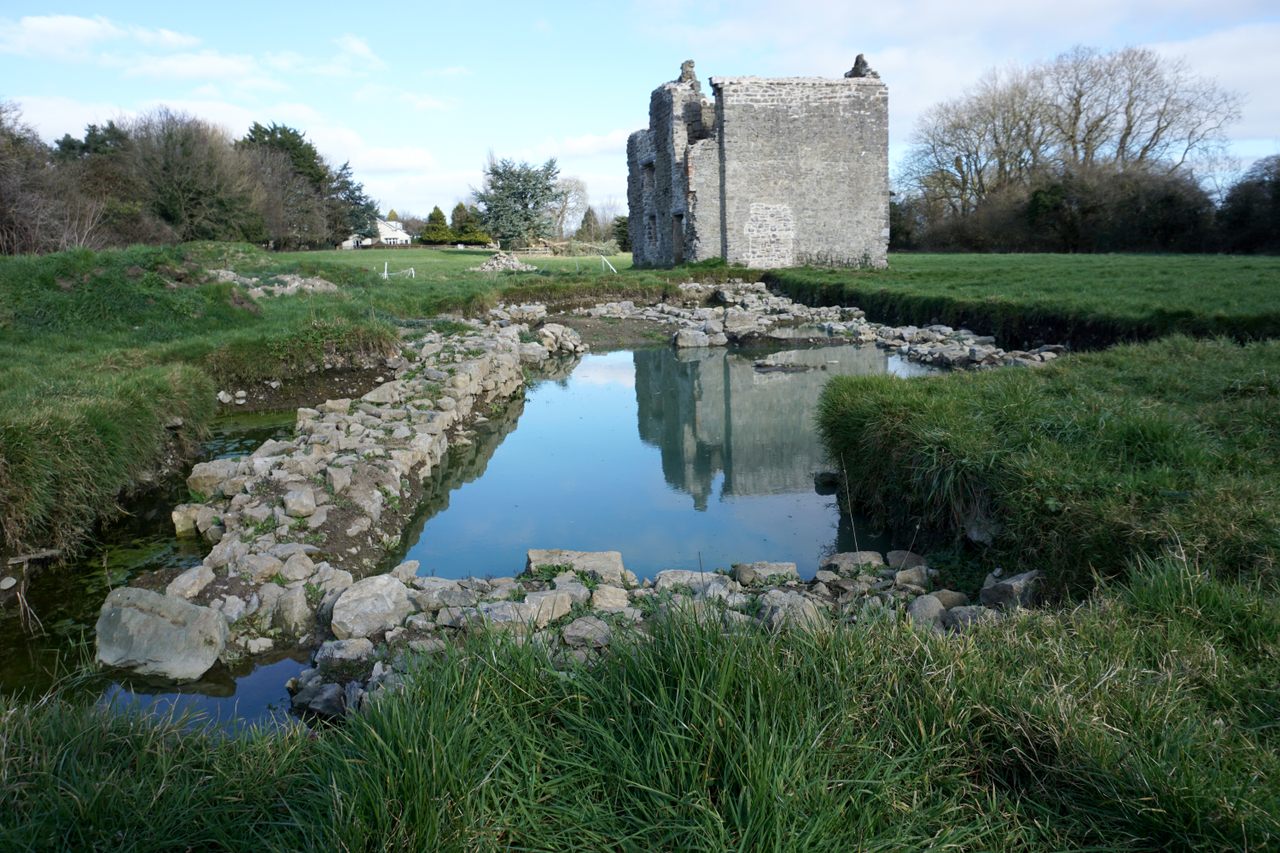 A five-acre pasture on the McCullen family farm, dominated by an old stone tower, has turned out to be the site of both a medieval monasterial complex and Neolithic ruins. Matt McIntosh
In This Story
Destination Guide

John McCullen steps through a gate and into a small, green pasture. Like so many fields north of Dublin, this five-acre section of the McCullen family farm is gently rolling and lush even in late winter. His steps are purposeful, his gestures deliberate and emphasized with a short walking stick as he approaches the centerpiece of the pasture: an old stone tower that looks no more remarkable than the multitude of other ruins scattered around County Meath. McCullen had a feeling there was more to the tower, however. One day, he started to dig.

His intuition proved right. The tower was hundreds of years older than thought, and would turn out to be the only remaining building from a lost medieval monastery. Even more surprising: Beneath the tower and other remains of the medieval site are much older structures, which date back millennia. Thanks to McCullen’s hunch and persistence, and the efforts of his family, researchers, and volunteers, the true significance of the site has finally been unearthed.

For generations, the McCullens had called the tower “the castle,” or “the pigeon house,” for its resemblance to old dovecotes built to accommodate the birds. They had assumed it was built in the 17th or 18th century, during previous construction at the site and at a time when both dovecotes and follies, or decorative architecture, were in style. McCullen’s curiosity about the structure began as a boy 70-plus years ago, thanks to a cryptic warning from his Aunt Mary, one passed down for decades in the farming family: “Don’t take any stones from the pigeon house, because it’s a monastic place, and woe betide any despoiler!”

There was one feature about the tower that suggested it might be older, however. McCullen notes that a single window in the upper part of the structure was of “Norman design,” hinting at possible medieval origins. The tower’s red sandstone offered another clue. The stone is rare in the area, but was a favorite building material of French masons, particularly in the medieval era. Something else McCullen noticed hinted that the tower might be just one of several buildings in the pasture: During spells of dry weather, patches of grass turned brown in consistent patterns, suggesting that there was something buried beneath them.

“We were very curious,” McCullen says, prodding a piece of sandstone with his walking stick. “We started doing some work ourselves.”

In 1997, McCullen began digging with the help of neighbors and members of the local historical society, eventually revealing an 18th-century driveway. Another investigation, in 2016, used ground penetrating radar to detect a large complex of buried foundations. The tantalizing results of that survey secured funding for a bigger dig that began in 2019.

Through artifacts and architecture uncovered in the most recent excavation, and comparisons between the site and historical documents, the team was able to confirm the complex had 13th-century origins. In fact, they discovered it was the lost Cistercian monastery of Beaubec, a working farm, or grange, that was mentioned in medieval texts but never located by archaeologists.

The medieval site was much larger than even McCullen suspected. It includes a large barn that would have been nearly 200 square meters (more than 2,000 square feet) and remnants of a bread oven, brewing kettles, and a kiln for drying grain. There was also a storage area that archaeologists believe was used to hold goods destined to be exported to France, where the Cistercian order was headquartered. Geraldine and Matthew Stout, the veteran archaeologists managing the Beaubec project, find the site’s French connection particularly interesting.

“It’s unique in Ireland,” says Geraldine Stout, noting that the monastery’s construction involved a lot of timber, unusual in a region where stone was the preferred building material. “The monks who came from Normandy came from a place with plenty of trees and had different methods,” she says. “It’s only when we went to the [home monastery] in Normandy that we realized the similarities.”

The dig also uncovered flint arrowheads and the remnants of what might be a stone circle or passage tomb similar to the structures, more than 5,000 years old, found at the nearby UNESCO World Heritage Site of Newgrange. Grace McCullen, John’s daughter, worked as a tour guide at Newgrange and takes particular delight in learning the family farm has its own Neolithic monument. “We used to play around it as kids, you know,” she says.

While the Newgrange site enjoys a number of protections, many other monuments from Ireland’s past—including those not yet discovered—are at risk from urban sprawl, road construction, and other destructive activities. Archaeologists increasingly rely on people such as John McCullen to recognize the significance of what may be sitting in their pastures.

“There are 250,000 monuments in the Republic, and maybe two dozen are major tourist attractions. Even though the goodwill is there, we still rely on landowners being on board,” Matthew Stout says. The McCullens, the Stouts, and their colleagues at the Archaeological Survey of Ireland see Beaubec as a case study for showing how monuments can be preserved on private rather than state-owned land in a way that works for landowners as well, allowing working farms to continue without disruption. In fact, at Beaubec, the team plans to backfill open excavation trenches in a way that communicates the size and layout of the medieval monastery complex but also allows the McCullens to continue using the pasture for their livestock.

While the digging may be done for now, archaeological work will continue with an additional geophysical survey of a wider area around the pasture planned. Geraldine Stout expects to find more remains of the monastery, including its abbey and cemetery. Like John McCullen, whose lifelong curiosity about the pigeon house started the process of discovery, Stout has hunch about the site. “It still has more to yield,” she says.

The remnants of Borgund were buried in the dirt for centuries and then sat in museum storage for decades.
plague

A look inside the Mediterranean trading power, courtesy of its hard-working 16th-century porters.
ruins

The discovery, in a city famed for its Roman ruins, may mark the site of England’s first coronation.
archaeology

The women in this century-old photo weren't visitors—they were probably scientists.
Video • PinDrop