Meet the Man on a Mission to Hand-Paint 50,000 Bees - Atlas Obscura
Want to see fewer ads? Become a Member. 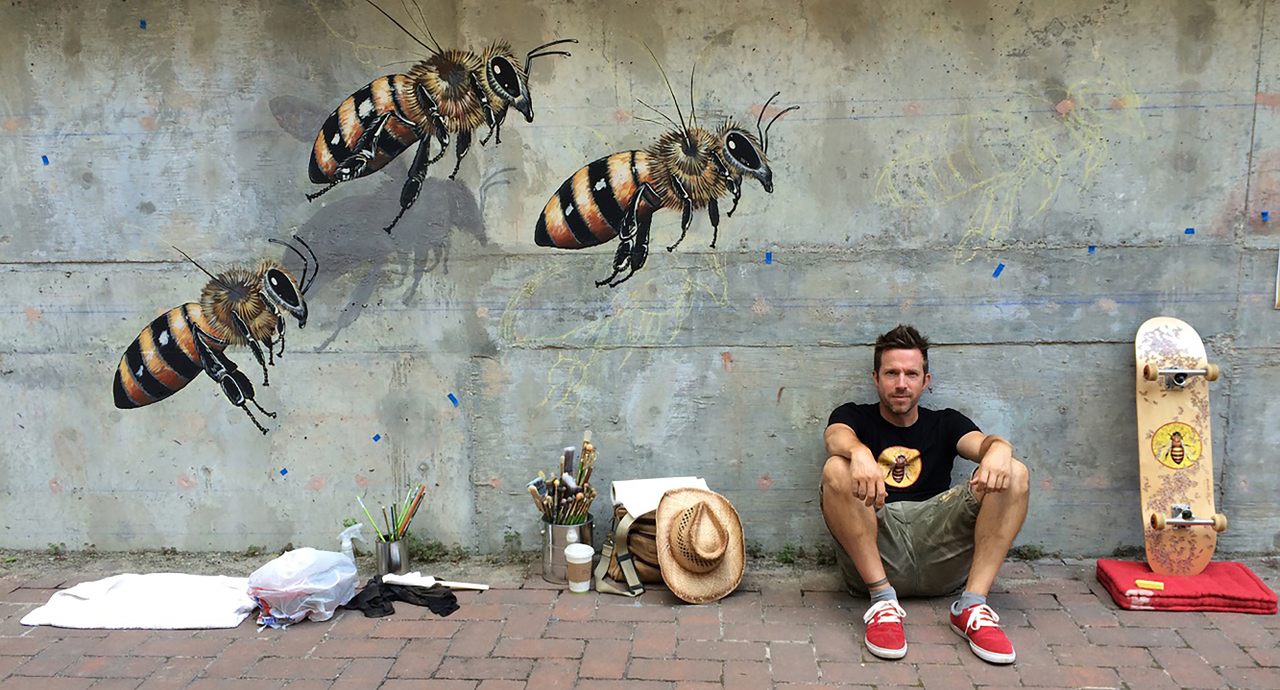 Willey poses next to his mural at the North Carolina Museum of Natural Sciences. All photos courtesy Matthew Willey

The artist Matthew Willey used to instinctively avoid bees, as so many of us do—until one fateful day in 2008. “I was in my studio in the East Village and a little honeybee flew in and landed right in the middle of the rug,” Willey shares. “She was walking along the carpet, not flying around, so I had the opportunity to get down on the floor and really study this bee.”

Leery but curious, he grabbed a magnifying glass and began to examine the ailing bee up close. “The first thing I noticed was the fuzziness and the cuteness,” he says. “This looks like a little tiny puppy more than it looks like a bug to me,” he remembers thinking. For two hours, Willey “connected” with the bee—marveling at its intricacy, pondering its presence.

Willey believes the bee’s solitary demise was an act of altruistic suicide, an extreme behavior found in many social insects that protects colony as a whole from sickness or invasion. He began to research honeybees, and soon discovered that they are dying in droves all over the world. The implications are devastating for humans and the planet at large.

“Colony collapse disorder is a phenomenon first observed in honeybee colonies more than a decade ago,” explains Victor H. Gonzalez, a melittologist at the University of Kansas and editor-in-chief of the Journal of Melittology. It occurs when worker bees suddenly abandon the hive, leaving behind the queen, brood, and honey. “After years of research, it appears that many factors—including parasites, pesticides, and poor nutrition—are the main causes.” Honeybees are critical pollinators for many food products that humans depend on, and add at least $15 billion to the value of U.S. agriculture each year, Gonzalez adds.

Willey, who has painted murals for 25 years, including a 10-year stint as a muralist for the Washington Wizards, sat with his newfound passion for bees until 2015. Then a friend sent him an iPhone video of the side of a fifth-generation beekeeping company in LaBelle, Florida. “You should call them up and see if they want a mural,” he remembers her saying. “And I was like, ‘You know what? I’m gonna.’”

The beekeeping company loved the idea, but they had no money for a mural, and neither did the town. “And on top of that, murals are illegal in LaBelle, Florida,” Willey remembers hearing. He wasn’t worried about payment—“I believe money is important and honor the energy of it, but I do not believe it should guide the human spirit,” he says—but admitted that he paints too slowly to go on the lam. “I didn’t figure they were ever going to get the law changed,” he says. “I hung up the phone and figured that was that.”

Two months later, Willey received a phone call and learned, to his amazement, that the law had been changed. He dutifully headed south and painted 16 bees onto the side of Harold P. Curtis Honey Co. He thought it was a one-time thing, but the bees apparently had other plans: Onsite, an observer with a honeybee perched on his shoulder approached Willey and said, “This bee is telling me to come and talk to you.” The man asked Willey how many bees make up a healthy, thriving hive. Willey had learned the number—30,000 to 50,000—just the day before. “He just looked at me and sort of flippantly said, ‘Do you think you could paint 50,000 of them?’” Willey recalls. “It was a lightning-bolt moment.”

Today, through Willey’s organization The Good of the Hive, the artist has painted 5,436 bees in 27 separate murals, each of which takes eight weeks or more. “Don’t do the math on the amount of time,” he jokes. “I’m figuring out how I can pick up the speed and get it done in 15, 20 years.” He’s painted 22-foot bees on a barn roof in Lyons, Nebraska—visible only to crop dusters whose wake can inadvertently hurt organic farmers—and a life-size bee on a child’s cochlear implant. He’s painted bees on a North Carolina elementary school, the Great Ape House at the Smithsonian’s National Zoo, Burt’s Bees headquarters, and Post Office 12764 in the rural hamlet of Narrowsburg, New York.

The murals don’t feature bees exclusively—many incorporate birds and flowers, especially dandelions, a vital source of nourishment for bees. “Honeybees are not the only pollinators,” Gonzalez explains. “His murals also remind us of the pollinators we tend to ignore, like flies, butterflies, and beetles.”

By the time he paints the 50,000th bee, Willey hopes to have shifted public perception, spreading the message that humans are also members of a hive—and our health, ultimately, is collective. “It’s the idea that I’m not just me,” he says. “That whatever I’m doing—every thought, action, behavior, everything I discard to every positive thing I do in the world—has a ripple effect that goes out and affects others.”

What a Socially Distant World Would Really Look Like

Can these unlikely bursts of beauty refresh Australia’s parched rural towns too?
insects

Found: The First Bee's Nest Made Entirely of Plastic

Researchers in Argentina found the synthetic nest by chance.
insects

Scientists were thrilled to find the Wallace's giant bee, missing for four decades. Things did not go as they'd hoped.
Video • AO Docs