21 'Ugly' Buildings That Aren't Ugly at All - Atlas Obscura 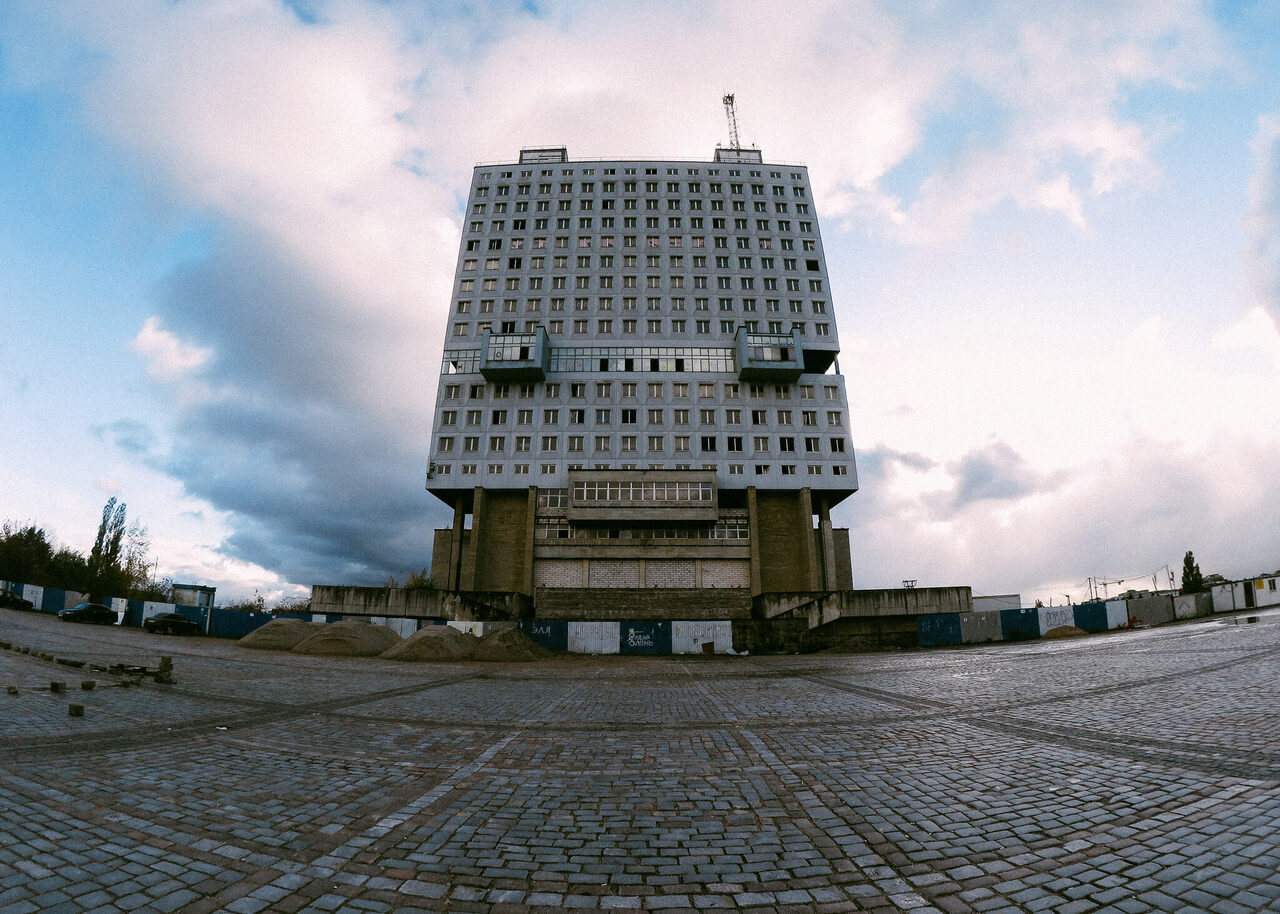 Beauty, the eye of the beholder, etc. Felipe Tofani/CC BY-SA 2.0

It’s easy to put together collections of beautiful, soaring buildings that perfectly encapsulate today’s hottest architectural trends. But who will speak for the edifices that have gone largely out of favor since they were first constructed? The imposing behemoths and the strangely angled stars of yesteryear’s design fads? Atlas Obscura readers, that’s who. We recently asked members of our community to tell us about the “ugly” buildings they love, and you weren’t shy in sharing your appreciation for your favorite misunderstood structures.

While the style certainly doesn’t have a monopoly on unconventionally attractive architecture, the majority of the responses we received pointed to brutalist institutional buildings—especially those featured on college campuses. But what all of your nominees ultimately have in common is a way of inspiring devotion in spite of (or sometimes because of) the way they appear on the outside.

Take a look at a collection of some of our favorite responses below, and if you want to see more, or even add your own, head over to the Community forums and join the conversation!

“I nominate the Hilton San Francisco Financial District, which was formerly the Holiday Inn Chinatown. In both incarnations, it’s a hulking concrete pile towering above the neighborhood, but there’s nonetheless something lovable about it. Maybe it’s the cool, futuristic concrete bridge that connects it to the park across the street?” — tyler

“The Engineering Center campus building at University of Colorado, Boulder is often called the ugliest building in the campus, because it’s decidedly different from the rest of the ‘Tuscan’ style buildings on campus. It definitely stands out, but I don’t think it’s ugly. I’ve spent many hours hanging out and exploring the nooks and crannies of this building, even though I wasn’t an Engineering student.” — nagnabodha

Wescoe Hall at the University of Kansas

“I lean towards Wescoe Hall on the University of Kansas campus. And, although the outside leaves a lot to be desired, the inside is also an underwhelming, dated, and drab labyrinth of winding and looping hallways. Story has it that the building originally started as a parking garage, but soon became the English department. Whether or not that’s true, I still haven’t heard.” — hallucin

House of the Soviets

“Used to live in Kaliningrad, Russia. We called the (still-unfinished) House of the Soviets building, ‘the robot head.’” — wilsongriffin

“In Milton Keynes there is a building everyone loves to hate: The Point. It is apparently going to be demolished soon, but at one time this was relatively famous as the home of the U.K.’s first multiplex. It also used to light up at night and it could be seen for miles.” — claudiarosani

Buchanan Tower at the University of British Columbia

“This ugly brute is called Buchanan Tower. It’s on the University of British Columbia campus and houses most of the offices of the Arts professors. It’s by far the ugliest building on campus, but also the coziest, and it has a special place in all of our hearts (especially those in the History department).” — ccass927

“Never been in, but it catches my eye every time I pass by.” — tylercortner

The Institute of Texan Cultures

“The Institute of Texan Cultures building [in] San Antonio, Texas, was the Texas State Pavilion for the 1968 World’s Fair and now it’s the home of the Institute of Texan Cultures museum. It’s also the site of the city’s annual Asian New Year Festival, which I’ve gone to almost every year since at least 2002. I missed 2017 and it threw off my sense of time for the rest of the year. Apparently my brain has come to accept the Asian New Year Festival as a sign that it’s February and can’t really accept that it’s March or later without it.” — Olivia

Wurster Hall at the University of California, Berkeley

“Marring UC Berkeley’s park-like Beaux Arts/City Beautiful/Neoclassical–inspired campus is Wurster Hall, a colorless, asymmetrical, brutalist argument against form following function. Cal’s ugliest building houses its architecture program, as its students will tell you with both irony and a strange sense of pride. The interior is exactly as attractive as the facade, sculpted from the same cold, unadorned concrete, and left largely unfinished, so that the students can see examples of a building’s working systems simply by looking up to follow the tubes, pipes, and conduits running across the ceilings. The only splash of color you’ll find is the abundance of graffiti in the stairwells, left by there by the students on the rare occasions when they escape the confines of the upper-floor studios.” — pds888

“Somehow, most buildings that fascinate me in an ugly/lovable way are churches?! In Strasbourg, France, most churches look alike (they’re made from a darkish pink stone like the cathedral), and either pretty or unnoticeable. But there are exceptions. This one, that kind of looks like a space building from Interstella 5555 that was made for worshiping wheat (?!) in the 60s. Why do I love you, ugly, brownish church? Why?” — Bouboulina

“My hometown of New Haven, Connecticut, has plenty of ugly and harsh, brutalist architecture, but the old Pirelli Tire building on Long Wharf, which was designed by Marcel Breuer, has always been my favorite. It’s fascinated me since I was a kid.” — jmang

Central Hall at the University of York

“Students at the University of York, U.K., get to graduate in this wonderful concrete spaceship. It’s stuffy, surrounded by waterfowl, and was apparently once wrecked during a Boomtown Rats concert, but it’s such an iconic piece of the campus that there would probably be outcry if it is ever scheduled for demolition.” — AmunyAnkhesenra

“I lived here for a few months and would always joke about its very prison-like appearance.

*Kollegiums are dorm-like communal residences for students in Denmark.” — Ashley_Wolfgang

Physical Sciences Center at the University of Oklahoma

“I nominate the Physical Sciences building at the University of Oklahoma in Norman, Oklahoma. It is an unfortunate, running joke on campus that it is ugly. In fact, it is often treated as a unanimous opinion, and even called ugly on promotional tours. There are apocryphal ‘facts’ about its riot-proof origins (these rumors are also present for many brutalist buildings on college campuses around the country), and is affectionately called ‘The Blender’ due to its base+high rise arrangements.

However, I love this building. I think its brutalist, neo-modernist appearance is fantastic, and a breath of fresh air from the anglophilic, samey, ‘we want to be Harry Potter’ neo-gothic appearance of other ‘pretty’ campus buildings. I find its somewhat imposing nature beautiful. It was designed by two very notable Oklahoma architects, and I believe that its maligned reputation is misinformed and not respectful of its historical and aesthetic significance.” — joeyalb

“So ugly but I do love it. There’s a fire escape on the other side that local runners run up and down. My old office was across the street so I’ve spent years looking at this monster.” — Lolaswhitetrashparad

Social Sciences and Humanities Building at the University of California, Davis

“The Social Sciences building at the University of California, Davis, known as the Death Star, inspires love or loathing. It has endless weird passages and walkways that my teenage sons used for capture the flag games.” — kosmick

“I’m from Toronto, Canada, and I immediately think of the Sheraton hotel downtown. It’s across the street from our City Hall, and in a prime tourist district, and it looks like it went through some kind of horrible war. It’s a heck of an eyesore, but I know we’d miss it if it was gone!” — kathrynkef

Robarts Library at the University of Toronto

“It looks like an ugly concrete 2D pixel peacock.” — Andy416

A Team of Explorers and Scientists Traveled Through Antarctica—By Kite

In 2020, guests will be able to bask in the glory of a seven-story, basket-shaped hotel.
architecture

On Valentine’s Day 1994, protestors in Hollywood turned out to eulogize the Brown Derby.
architecture

Atlas Obscura readers from across the U.S. share their favorites.
libraries

China's Seaside Library Mimics the Rhythms of the Ocean