America's Train Fans Are Having One of the Best Weeks of Their Lives - Atlas Obscura
Want to see fewer ads? Become a Member. 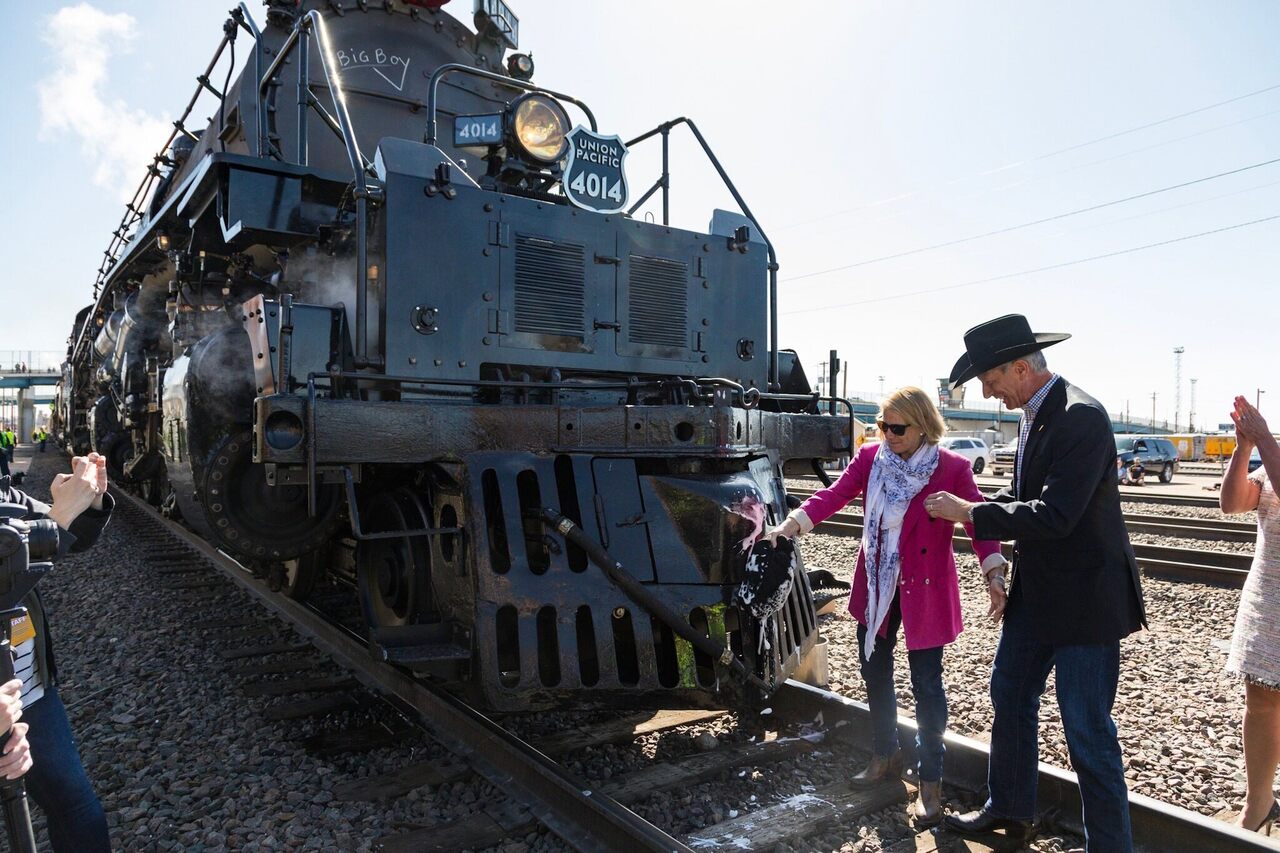 Lance M. Fritz, right, the chairman, president and CEO of Union Pacific, rechristens locomotive 4014 alongside his wife, Julie Fritz, in Cheyenne, Wyoming, on May 4, 2019. Photo by Scott Dobry/Courtesy Union Pacific

In seventh grade, Elrond Lawrence and Robert Spinuzzi made a pact with each other: If a Union Pacific Railroad 4-8-8-4 locomotive—known to railroad enthusiasts around the world as “Big Boy”—ever ran again, they would do everything they could to see it in person.

This past week, 40 years after Lawrence and Spinuzzi made that promise, their boyhood dream finally came true.

Thousands of train fans and history buffs are making a pilgrimage this week to Wyoming and Utah, to see the world’s largest steam locomotive run for the first time in nearly six decades. On May 1, the Union Pacific completed an extensive overhaul of Big Boy No. 4014, one of 25 such locomotives built by the American Locomotive Company in the 1940s, and a behemoth of a steam engine that many train lovers had thought was too big to ever run again.

The Big Boys weighed more than one million pounds and were 132 feet, 9 inches long. A single Big Boy was so powerful it could pull a train with enough material to build 16 Statues of Liberty. Although the locomotives were originally going to be named “Wasatch,” in honor of the mountains they would haul freight over, a shop worker is said to have written “Big Boy” in chalk on the front of the first one, and the name stuck.

The locomotives spent nearly 20 years hauling freight through the mountains of Wyoming and Utah. But in 1959, the Big Boys and other steam locomotives were replaced with diesel-electric locomotives, which were easier and cheaper to maintain. All but eight of the Big Boys were scrapped. The ones that remained were sent to museums from Pennsylvania to California.

In 2013, the Union Pacific announced that it was reacquiring a Big Boy to restore ahead of the 150th anniversary of the First Transcontinental Railroad on May 10, 2019. In 2014, the railroad moved Big Boy No. 4014 from a museum in Pomona, California, where it was on display at the RailGiants Trains Museum, to Cheyenne, Wyoming, where Union Pacific keeps and maintains two other historic steam locomotives for special events and excursions. At the time, the man leading the restoration, the locomotive engineer and mechanic Ed Dickens Jr., likened the effort to resurrecting a Tyrannosaurus rex.

Five years after Big Boy No. 4014 arrived in Wyoming, it returned to the rails under its own power for the first time on May 1. The following day, the locomotive was taken on its first run out of the rail yard to test its recently repaired systems. Along the way dozens of railroad enthusiasts came out to see the locomotive on its previously unannounced trip. Among them was Dave Schaaf, a railroad enthusiast from Denver who left work early last Thursday to drive to Cheyenne when he heard the locomotive might make its first run down the main line. Schaaf says even though the test run had not been publicly announced, word spread quickly and people lined the tracks in small towns along the line.

“It was impressive. The Big Boy is a locomotive in a class all its own,” Schaaf says, adding that he did not get home until 1:30 a.m. after following the locomotive through the night.

On May 4, the locomotive was christened in Cheyenne before departing for Ogden, Utah, where it will take part in a number of events to commemorate the sesquicentennial of the First Transcontinental Railroad. Railroad enthusiasts from across the country and around the world have been following the Big Boy on its five-day journey to Ogden, while others have been tuning into a livestream from Trains magazine to watch the progress.

Lawrence and Spinuzzi, the childhood friends who had vowed to someday see a Big Boy run in person, staked out a spot to see the locomotive climb Sherman Hill west of Cheyenne and say it was worth waiting 40 years.

“I never thought I would see a Big Boy run,” says Lawrence, who made the trip from California to see it. “When the engine went by, it really was a dream come true.”

Big Boy No. 4014 arrives in Ogden on May 8 and will be on display at Ogden Union Station until May 11. On May 12, the locomotive will start its journey back to Cheyenne, making stops in numerous small towns along the way. Union Pacific has published a schedule online of where people can see the locomotive for themselves in the coming days and tips on how to safely view the locomotive trackside. You can also track the train online in real time. Once the locomotive returns to Cheyenne, the crew will start preparing for a tour of the Union Pacific system—which covers 32,000 miles in 23 western states—this summer. Details of that trip are expected to be released soon.

Lawrence says it’s worth a special trip to see the locomotive in action.

How an Ancient Indian Art Utilizes Mathematics, Mythology, and Rice

The connection between New Orleans to Los Angeles can still be felt today.
railroads

A new book collects 33 routes that went off the rails.
railroads

No Trains Required to Ride the Rails

Woods was prolific, but was largely forgotten for many years after his death.
Video

Hold onto your engineer caps, railroad history lovers.
Read more
Thanks for sharing!