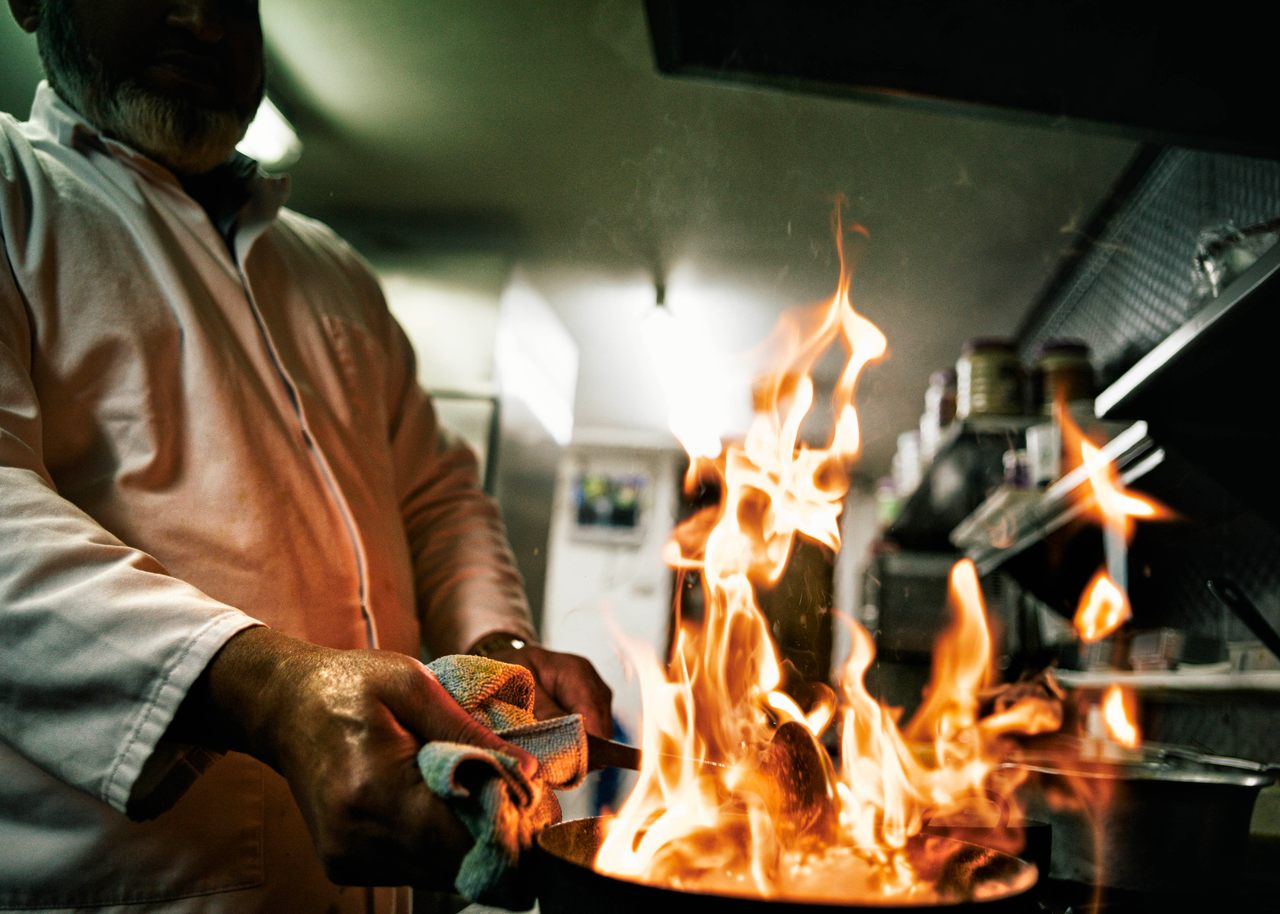 The Balti is cooked traditionally over scorching heat, which contributes to the speedy cooking process and allows for excess oil to burn off. Here, the Balti is cooked at Al Frash Balti House in Birmingham. All images by Daniel Stephen Homer
In This Story
Food

Once ubiquitous throughout the city, shops serving this unique Pakistani curry are disappearing.
Destination Guide

To successfully make Balti—a subspecialty of Pakistani curry that’s prevalent in the United Kingdom—is to rely on intuition. Apart from the sauce, which typically consists of a heady mix of ginger, garlic, coriander, garam masala, and other traditional spices, the Balti is, in essence, mastering the art of using scorching heat.

What makes Balti especially extraordinary is that its maestros are expected to concoct the sprightly stir-fry of meat and vegetables at swift speeds—usually within minutes, nearly half the time an average curry takes to prepare. The dish is then served in the same vessel in which it was cooked, a pressed, thin-steel contraption called a karahi. It’s eaten with a sizable naan, which is perfect for soaking up the last of the caramelized juices etching the bottom of the pan.

How the dish came to be called Balti is the subject of debate: It either stems from the Urdu term for bucket, or is used to commemorate the Baltistan region of Northern Pakistan. Its popularity and ubiquity, however, is uncontested in Britain—particularly in Birmingham, England. About a 20 minute drive from the city center, Ladypool Road, Stratford Road, and Stoney Lane collide to make the “Balti triangle.” There, family-run Balti restaurants co-mingle with sellers hawking their wares, jewelers, traditional dressmakers, and South Asian sweets shop owners.

The Balti triangle has its roots in the 1950s and 1960s, when immigrants from the Indian subcontinent settled in Birmingham. At the time, a wave of new economic opportunities cropped up after the Second World War, particularly in the industrial city. Looking for a way to support themselves and their families back home, new residents set up restaurants and hired staff that often lived in cramped quarters right above their culinary establishments.

Mohammed Afzal Butt, the owner of Imran’s Balti house, arrived with his family in 1967. After working in a factory, and then as a chef, he bought a clothing shop in 1981 and converted it into the storied institution. He and many other entrepreneurs ended up staying in Britain, and eventually brought their families over. In time, their children became poised to take over the shops, too.

Mohammed Arif, who’s said to have created the Balti in the late 1970s, came to Birmingham from Pakistan. He was already cooking homemade food for his peers, so it made sense to open a restaurant. After he opened it, Arif spent several weeks in Pakistan, where he saw flavorful, spicy curries being served in the same pan they were cooked in. When he came back, he had an idea. His creation, which appealed to European palates, involved a lighter version of traditional curry. The rapid-fire, high-temperature approach to cooking Balti, coupled with many spices and herbs, gave it its distinctive flavor.

At first, they faced animosity from some white Birmingham locals, several of whom once approached the city council and asked for discounted housing, citing the smell of the spices their new neighbors cooked with. But in the 1970s, South Asian establishments began to replace fish & chip joints in the Balti triangle area. In his book Going for a Balti, author Andy Munro notes that back then, many inebriated club-goers tottering back home went for curry, as most culinary establishments tended to shut shop as the sun set.

“When the Balti came about, I think [it] changed the face of curry,” Munro says, adding that it became more of a family-style meal. Especially since many a Balti house, including Shababs, Imran’s, and Al Frash, owned by Muslims, did not serve alcohol. All these restaurants had “dicky bows, silver servers, white napkins, and hot towels,” he notes.

Balti houses soon attracted a wide customer base, and dozens of restaurants achieved popularity throughout the 1980s and 1990s. It wasn’t just Balti houses, either: Curry houses in Britain saw a particularly huge boom during that decade, swelling from about 3,000 houses in 1980 to nearly 6,600 establishments in 1990. Special vegetable, cutlery, and knick-knack suppliers sprouted to work with the Balti houses. Now, it’s estimated that two to three curry houses close per week, and with them, the Balti houses have been disappearing in recent years, too. The beloved Saleem’s shuttered in 2014, and a mainstay, Dawat, closed its doors in 2016.

Even these suppliers, including Uncle’s and Raja Brothers, saw their popularity begin to wane first under the auspices of Margaret Thatcher’s government, which saw the advent of 24-hour supermarkets. Uncle’s was considered an institution in itself as a seller of kitchenware and other knick-knacks. “We were the original suppliers of the Balti dish … we sold them by the hundreds,” says Surinder Singh, who ran the store until it closed earlier this year. “We’ve had a good innings—60 years is a long time.”

In 2016, a long-standing and fraught attempt to acquire the coveted Traditional Specialty Guaranteed (TSG) status—a European Union food designation for products made with “traditional” ingredients—for the Birmingham Balti was abandoned. Those fighting for the cause, including locals and British politicians alike, were unable to convince the gatekeepers that it’s the swift, high-temperature cooking method that makes the Balti special, and not any specific ingredients.

Other forces are encroaching on Balti’s once-dominant reign, too. Several restaurants face fierce competition from cheap fast food joints such as steakhouses and pizza places. Others are enticed by the city’s numerous Michelin star offerings.

Even if parents want to have a Balti, the kids often ask for burgers instead, notes Butt. Some Balti proprietors, such as Butt, are contemplating changes to adapt to evolving tastes, including serving alcohol. “We’re thinking of getting licensed because over the years we’ve learned that beer goes well with a Balti,” he says. “We don’t drink ourselves, but that doesn’t mean we shouldn’t sell what goes well with a Balti.”

In addition, succession planning has become trickier, as second-generation children of Balti shop owners and suppliers hope to pursue other educational and entrepreneurial opportunities in Britain. “We’ve worked hard. I just think we don’t want to see our kids pushing trolleys, lifting baskets,” says Singh. “We’ve worked for their education, and hopefully they better themselves. Personally, my daughter wants to go into medicine.”

Finding and hiring new staff has also been problematic. Working in a Balti house—putting naan into a hot tandoor, working on a high flame in a sweaty kitchen—is an acquired skill set. Additionally, acquiring work visas for chefs and other culinary staff arriving from the Indian subcontinent has become an even unlikelier prospect.

The staffing issues impacting the livelihood of Balti and other curry houses have not escaped the notice of political circles, either. Last year, Liberal democratic leader Sir Vince Cable urged the British government to issue one-year visas to redress this personnel crunch. The chef recruitment crisis also prompted the support of Andy Street, the West Midlands mayor, when he urged the government to relax immigration regulations. But as it stands, the once-booming Balti industry in Birmingham is in real danger of a bust, unless steps are taken to revive it.

The Designer Making Board Games You Can Eat

Win or lose, all that's left are crumbs.
curryspicesvisualfood

One of India’s most popular gastronomic exports tells a tale of empire.
food

Fruit curries have a sweet and savory history.
food