The Mystery of the Mummified Bishop and the Fetus in His Coffin - Atlas Obscura
Want to see fewer ads? Become a Member. 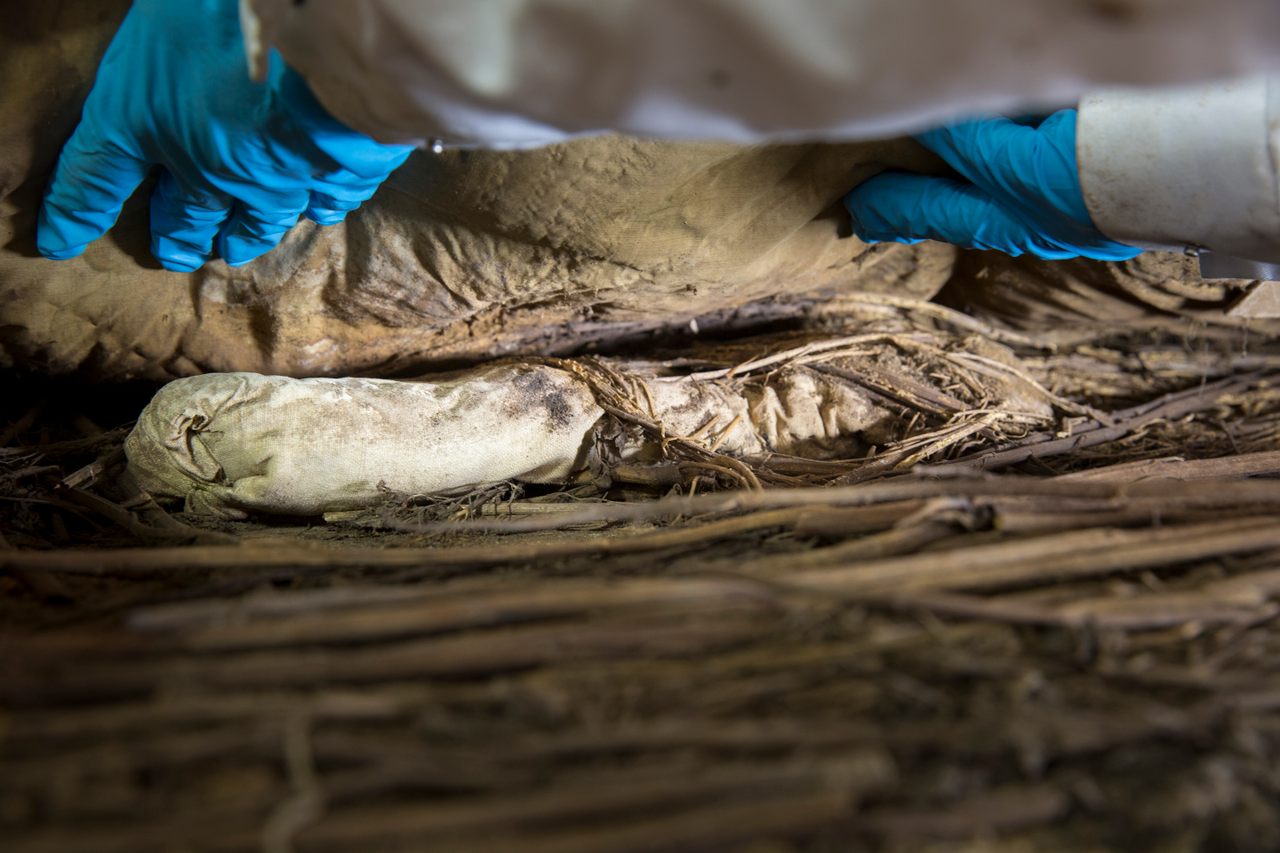 During examination of Peder Winstrup and his coffin a few years ago, researchers discovered the remains of a stillborn fetus, wrapped in linen and placed between the Swedish bishop's lower legs. Gunnar Menander
In This Story
Destination Guide

In life, Peder Winstrup was a man of both god and science, and a practical politician who advocated for his city of Lund, in what is now southern Sweden. In death, the 17th-century bishop is still providing assistance—as well as a puzzle, hidden in the folds of his funerary garb, that researchers are only now beginning to solve.

“This founding father, in one way, still lives, still contributes to modern society, through his coffin, through his body,” says Per Karsten, director of the Lund University Historical Museum. “It’s a mini-universe of the 17th century. With deepest respect, he is a unique medical archive that we can return to, over and over again, to ask new questions. And he will have the answer.”

In 2012, when Lund Cathedral officials decided to relocate Winstrup’s remains from the crypt, Karsten and his colleagues were able to analyze the coffin’s contents, including with CT scans and X-rays. They found that he had been laid to rest on a bed of fragrant lemon balm, hyssop, juniper, and other plants, which may have helped ward off decay. The bishop’s body had mummified naturally, perhaps from being kept in a cold, ventilated environment for weeks before his funeral. His remains, the plant material, and preserved textiles in his coffin have given researchers unprecedented insight into 17th-century diets and illnesses, the evolution of tuberculosis, and even insects common in Sweden at the time but now rare. (Nearly 50 invertebrates were present in the coffin, including Sweden’s oldest known bedbug.) But there was something else buried with the bishop: Someone had hidden a five- or six-month-old human fetus between Winstrup’s lower legs, beneath his vestment.

For years, researchers speculated that the stillborn child had belonged to a servant in the Winstrup household, or perhaps even the undertaker. Now, ancient DNA analysis has shown that the fetus belonged to the Winstrup lineage, and was most likely the bishop’s grandson.

“I was not expecting to see that they would be related,” says Maja Krzewinska, a biologist at Stockholm’s Center for Paleogenetics and the lead author of the new paper, published in the Journal of Archaeological Science: Reports. Her team was able to obtain the entire genome of both bishop and fetus thanks to recent advances in ancient DNA extraction and analysis. This showed a second-degree kinship, most likely along paternal lines, such as uncle and nephew. Combing through the Winstrup family tree, they determined the stillborn most probably came from the lineage of the bishop’s only son to survive to adulthood, Peder Pedersen Winstrup.

Karsten, who was not involved in the new study, says the results “are absolutely beautiful in every way—beautiful because I was wrong. I really love when science comes into play like that. You have one theory and new analysis proves that you’re wrong and you have to think in another way.” In 2015, Karsten posited that the remains had been hidden in the coffin by a servant or other staff member of the bishop’s household who had experienced a miscarriage. Winstrup’s health was clearly failing—the bishop had been bedridden for two years before his death—and the servant could have saved the remains out of grief, and put them in the coffin in the hope that the respected bishop might shepherd the child to the afterlife.

“By concealing the fetus, you make a statement that maybe it isn’t totally okay, but you do it to get the best chance for the soul of this unbaptized child to have a place on God’s right side,” Karsten says. “I find it very human.”

The stillborn was likely the bishop’s grandson, but the mystery is only partly solved: Who placed the remains there? From what historians know of Winstrup’s life and legacy, and the ruin of his family that followed his death, the answer may be part–cultural tradition, part–parental grief. The trail begins in the shadow of the cathedral’s imposing Romanesque towers, which have stood watch over the city for nearly a millennium.

When cathedral construction began in the 12th century, Lund was part of Denmark—Winstrup himself was born in Copenhagen—and would remain so until the mid-17th century. He was already bishop of Lund when transition to Swedish rule occurred in 1658, and Winstrup seized the moment.

“He was very practical and thought, ‘Okay, so now we’re Swedish, how can we benefit?’” says Karsten. “Why not start a university in Lund so that the city itself, the province, would prosper whether it was Danish or Swedish. I think he is a role model of a practical politician who’s trying to make the best for himself and for the city.”

Despite being a conservative, even “dogmatic,” Protestant bishop, says Karsten, Winstrup was deeply interested in natural science and, as chancellor of the university he helped found, successfully fought to include the medical sciences. “I think he would smile if he knew about the interest in him now,” Karsten adds.

Access to Winstrup’s remains allowed researchers to reconstruct his final years in painful detail. Bedridden, suffering a range of maladies, including tuberculosis, gallstones, heart disease, and severe tooth loss, he finally succumbed, likely from pneumonia, in December 1679. At some point before his interment the following January, someone hid the other remains with him in his coffin.

While Krzewinska declined to speculate on why the remains were hidden or by whom, she notes that her team’s results are just the first of several ancient DNA–based analyses of shared adult-child graves in Sweden. “This is fairly common in Scandinavia in medieval times, where we see multiple burials of adults with children. And we don’t know why that is,” she says. “I’m looking to see what’s the relation between the grown-ups and the children. No one has ever looked at that, because only now do we have the tools.”

Ancient DNA cannot answer who hid his stillborn grandson in the coffin. Karsten now believes it was the child’s grieving mother, Dorothea Sparre, who wed Peder Pedersen Winstrup just a year or two before the bishop’s death. The younger Winstrup was likely a disappointment to his father, says Karsten: “The son was a gambler. His heart was not in the Bible at all. That would have meant a great sorrow for the old bishop.”

There is no record of any offspring, and within months of his father’s death, the younger Winstrup lost the family fortune when the Swedish crown took back lands and residences previously granted to the aristocracy. Sparre and the bishop’s son, says Karsten, ended up “totally poor. It was a very steep fall.” Details of their deaths are unknown.

The elder Winstrup’s remains have been placed in a new, metal coffin intended to preserve him for future scientists. However, Karsten laments the bishop is now interred in a part of the cathedral out of public view, behind the building’s massive—and noisy—medieval astronomical clock. “If that doesn’t wake you up, to hear the alarming bells,” Karsten says, completing the thought with a shudder. “It’s very disturbing for a bishop’s final resting place.”

And the remains of what would likely have been his grandson, but represents the end of the Winstrup legacy? “Of course we placed the fetus with the bishop,” Karsten says with a smile. “They belong together.”

New research reveals that the hundreds of anonymous dead spanned both continents and centuries.
science

A surprise discovery from Haiti may finally reveal how some famous feral horses got to a distant barrier island.
mummies

3:07
Want to see fewer ads? Become a Member.
From Around the Web
Atlas Obscura Trips
Rewilding: Tracking Wolves in the Forests of Sweden
View This Trip
Thanks for sharing!