The Bones at India's Mysterious 'Skeleton Lake' Came From All Over - Atlas Obscura
Want to see fewer ads? Become a Member. 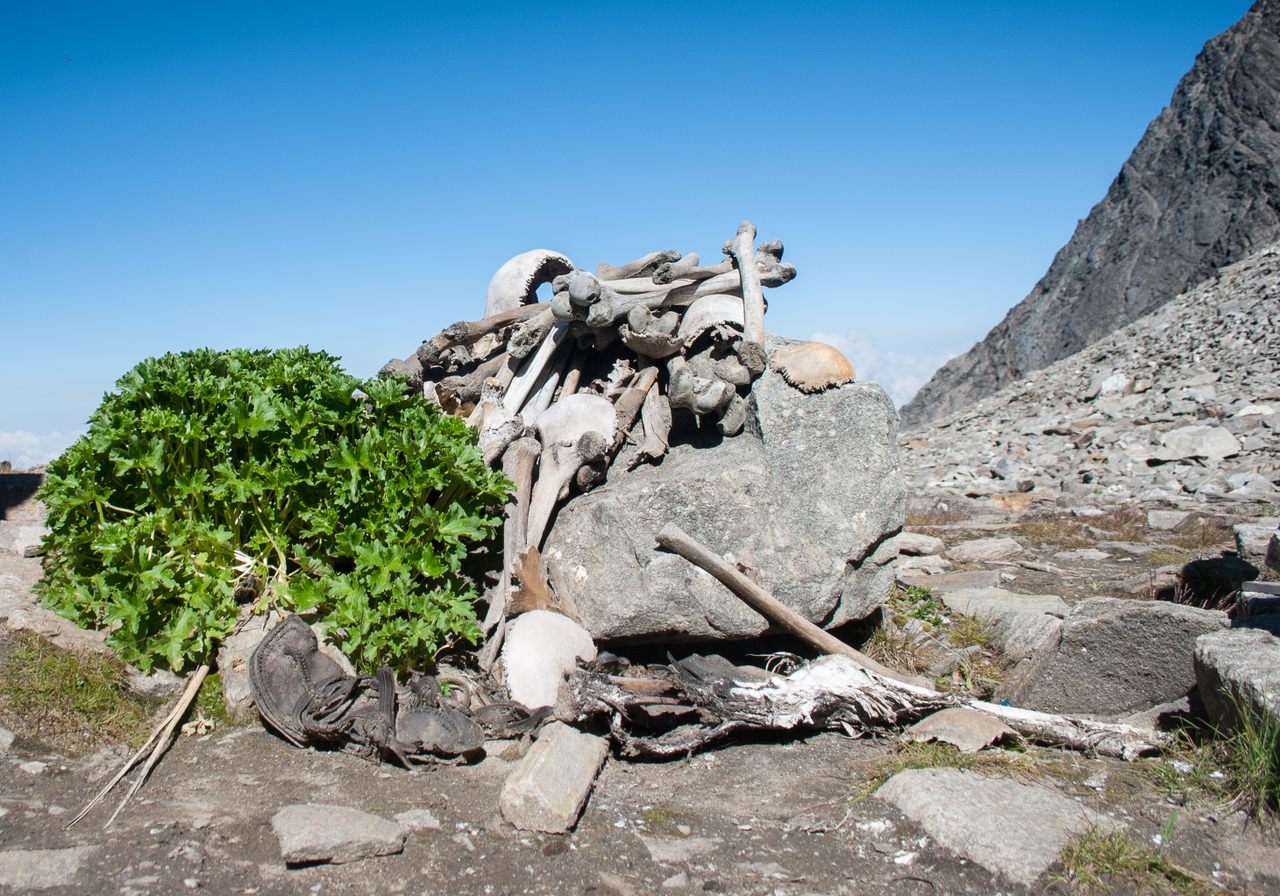 Whatever happened here didn't just happen once. Schwiki/CC BY-SA 4.0
In This Story
Place

A lake with hundreds of ancient skeletons surrounding it. The surprise is what killed them.
Destination Guide

No one knows exactly how they got there—the skeletal remains of 500-some-odd people spread around Lake Roopkund, in the Indian Himalayas. Since the bones were rediscovered by a forest ranger in 1942, a number of haunting—if unsubstantiated—theories have circled the skeletons like vultures: Had these been Japanese soldiers who succumbed to the elements? Victims of a landslide or forgotten epidemic or attack?

Now an international team of more than two dozen researchers has thrown more than one wrench into this enduring and alarming mystery. As it turns out, the remains do not all date to the same historical period—and they don’t even share a common geographic origin. This means that, many centuries apart, different groups of different peoples from different parts of the world somehow all met their demise at this same spot, which has since earned the popular moniker Skeleton Lake. The researchers published their puzzling findings yesterday, in the journal Nature Communications.

Éadaoin Harney and Nick Patterson, biologists at Harvard University and two of the study’s 28 authors, say they were very surprised by what they found in their DNA analyses. With their colleagues they looked at 76 distinct skeletal elements, 38 of which provided full genomic information, and all of which combined to present an impressive diversity: Of the 38 individuals, the remains of 23 date approximately to the year 800, while the remains of the other 15 date approximately to 1800. Though the 23 older individuals all appear to have come from South Asia, Harney and Patterson say there is evidence indicating that they came from different places within the subcontinent, and the evidence indicates that their remains were “deposited in more than one event.” All but one of the other 15 individuals, meanwhile, came from as far away as the eastern Mediterranean—perhaps, says Patterson, from somewhere in the Greek-speaking world. The remaining individual had Southeast Asian ancestry, and so constitutes a third distinct group.

Ayushi Nayak, another author of the study and a PhD candidate in archaeology at Germany’s Max Planck Institute for the Science of Human History, emphasizes that those three groups were represented in the remains of just 38 individuals. How many more historical periods and geographical regions, she wonders, might lie within the site’s hundreds of bones? Looking at all of them was not feasible for just one study, but the remaining samples have been well preserved by the chilly Himalayan air, so more research is possible.

Until then, scientists can be kept plenty busy trying to figure out how people from the eastern Mediteranean ended up at Roopkund. Patterson hopes that the project will become even more interdisciplinary, with Indian and Himalayan historians combing archives for some indication of these mysterious travelers. (For now, the researchers say, the only hint is that the lake sits along a pilgrimage route, though that doesn’t necessarily explain these particular populations.) Harney and Nayak also hope that further research can uncover what caused these deaths, even if information about the groups’ identities remains elusive. Earlier research submitted that the deaths were caused by a hailstorm, but the new study shows that no single catastrophic event could explain it all.

That’s the thing: The new research, insightful as it is, hasn’t made Skeleton Lake any less mysterious or inscrutable—it actually seems to have made it more so. “We still don’t know why there are so many scattered dead individuals at this site,” says Nayak. That fundamental question makes this Himalayan lake a chilling scene indeed.

The Dinner Party That Served Up 50,000-Year-Old Bison Stew

A surprise discovery from Haiti may finally reveal how some famous feral horses got to a distant barrier island.
mummies

Remains hidden with this Swedish “founding father” likely belonged to his grandson, but questions linger.
skulls

The answer involves pseudoscience, politics, and a burglary at a windmill.
plague

A city built on water was always going to struggle with burials—especially when a deadly pandemic came to town.
List

15 places where rodents are celebrated, feared, preserved, and studied.
Video • Wonder From Home

3:07
Want to see fewer ads? Become a Member.
From Around the Web
Atlas Obscura Trips
India: Desert Festivals of Rajasthan
View This Trip
Thanks for sharing!