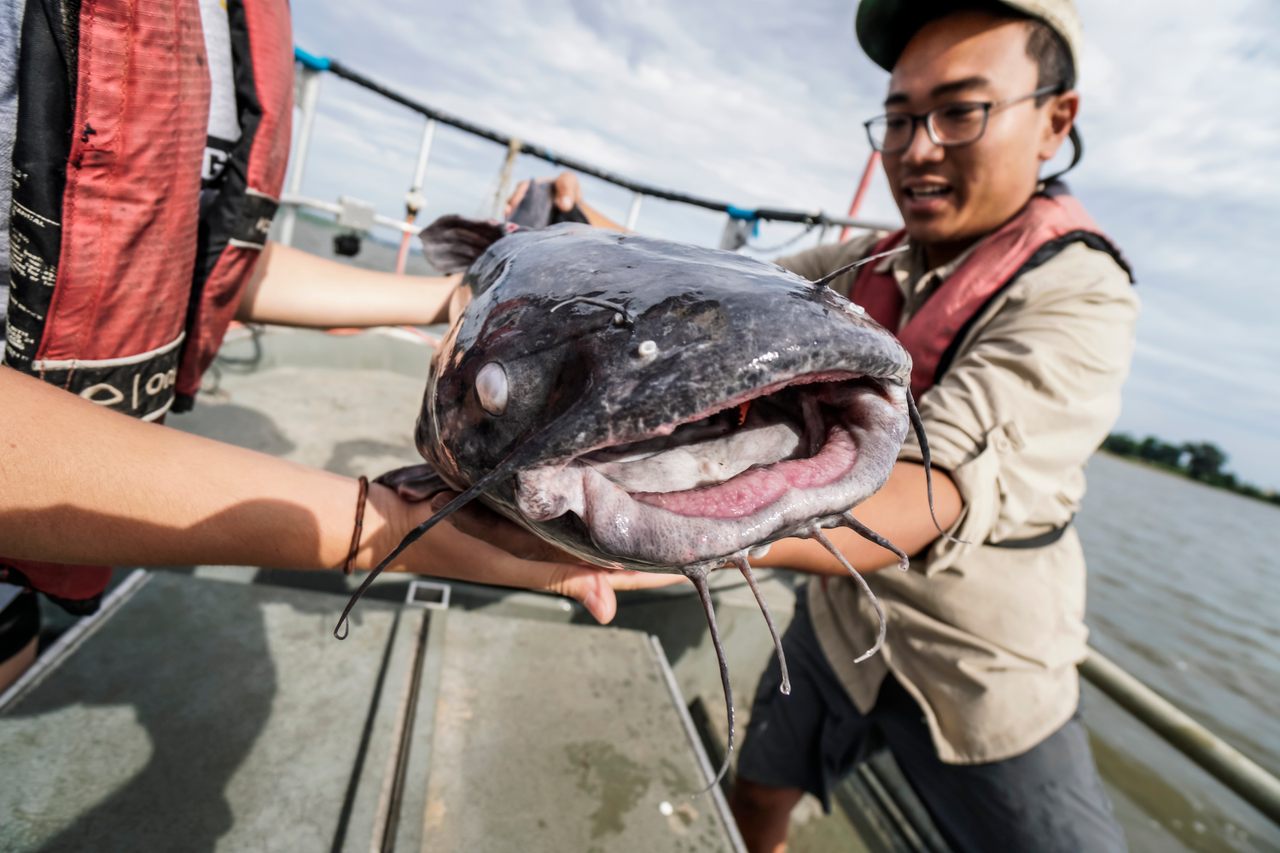 Ever since it was introduced to Virginia’s waters for sport in the 1970s, the blue catfish has eaten the Chesapeake alive. “You cut one open and you’d see six blue crabs in their stomach,” says ecologist Dr. Howard Townsend. “The problem is they eat everything.” When they eat enough—and they often do—they can grow to well over 100 pounds.

Lacking any known local predators, an estimated 100 million of these hulking invaders now comprise up to 75 percent of the total fish biomass of some Chesapeake rivers, and recent years’ rainfall has only expanded the freshwater species’ stomping grounds. In response, residents of the Chesapeake are trying to eat their way out of the problem.

The region’s call to arms—or rather the dinner table—is only the latest attempt to turn appetites toward solving an ecological problem. After pelters unleashed hordes of furry South American rodents on the American South in the 1930s, the animals overbred and collapsed their own market. Attempts to promote “nutria” as delicious have largely stalled; swamp-rat meat evades simple rebranding.

In the Southeast, invasive lionfish, which were likely released from personal aquariums, are ravaging native species along the coast. They’re tasty enough, but can only be caught one at a time by speargun—a process far too inefficient to sustain a market. “Invasivorism” has a long, well-intentioned, but mostly unsuccessful history.

Two characteristics of blue catfish, however, make this standoff different. This invasive species is changing the way an entire region eats.

For one, this species of catfish is undeniably good eating. “It’s an amazing product,” says John Shields, proprietor chef of Gertrude’s Chesapeake Kitchen. He proudly claims to be the first restaurant in Baltimore to serve blue catfish. “And we’ve been pretty successful with it. We’ve changed so many people’s perception of it.”

Unlike native bottom-feeding catfish, its invasive counterpart came to dominate the entire height of the water column. This threatens the bay’s sensitive stocks of shad, sturgeon, and herring, but swimming and eating closer to the surface also means they make for more palatable meat.

“My grandmother had to soak catfish in milk for 24 hours to take out that muddy flavor, but now I don’t have to do that,” says Shields. “It has a much cleaner taste with a lovely, firm, yet flakey texture.” The self-described “cheerleader for invasive eating” pan sears blue catfish with creole shrimp and coconut rice at his Baltimore restaurant.

They’re also a laughably easy catch. In fact, scientists once caught 6,000 in just an hour. Their greatest enemy, however, may be the Wide Net Project. “You have environmental issues, you have food access issues, this is a really good solution for both,” says co-founder and director Wendy Stuart. The non-profit is working to create a marketplace for the invasive species while donating fish and subsidizing sales to hunger-relief organizations and schools. “It wasn’t until the women who started Wide Net Project brought it to the forefront that all of our local purveyors started carrying blue catfish,” says Shields.

Together with the Maryland Department of Natural Resources, Stuart and her co-founder secured a green rating of sustainability from the Monterey Bay Seafood Watch in 2015, earning blue catfish a spot in retail fridges from Whole Foods to Mom’s Organic Grocers (a regional chain). The Wide Net Project now distributes fish throughout Maryland and Virginia, and as far north as Philadelphia, blanketing the mid-Atlantic’s universities, restaurants, and baseball stadiums in tasty fillets of invasive seafood. If harvests are any indication, the people of the Chesapeake are developing a taste for the ecological threat: The 400,000 pounds of blue catfish extracted from the bay in 2014 jumped to 5 million pounds by 2017.

Twenty years ago, chefs would have scoffed at the idea of selling catfish in their restaurants. Today, blue catfish dot menus from D.C. to Baltimore. “No one I’ve suggested eating it hasn’t liked it,” says John Shields. At Ida B’s Table in Baltimore, Chef David Thomas’s customers eat 100 pounds a week. “People don’t think of catfish as something you can have a glass of wine with—this is the complete opposite. It’s like any great fish out there,” he told Remsberg Studios. Almost any restaurant serving fish in the D.C. area, says Stuart, reserves a place for blue catfish.

Whether the tireless work of area chefs and scientists is paying off remains to be seen. I pressed Maryland Department of Natural Resources Fish Ecologist Dr. Joseph Love for an accurate tally of today’s blue catfish population. “I love that word, ‘accurate,’ and I have to tell you, we don’t have one,” he says. Tracking millions of fish across several states and jurisdictions is an uphill, underwater battle. The fish may be having more of an impact on the lives of the Chesapeake region’s human inhabitants than the other way around.

Dr. Love’s report from December 2019 titled “Save the Bay: Eat Invasive!” encourages readers to “Fish and eat; then repeat.” “We’re just trying to make the best of a bad situation,” he says. “Because the next introduction might not be a food fish, you know what I’m saying?”

The only certainty is that the fish are here to stay. “Eradication is out of the question at this point,” says Townsend. The only hope to preserve the biodiversity of the Chesapeake of tomorrow is to maintain the trend in recent decades of eating invasive. “It’s part of the Chesapeake infrastructure now,” says John Shields. “It has no natural predators at all—we’re it. We can do an environmental deed with our knife and fork on this one.”

New Jersey's Passaic River has been unsafe to fish for decades.
food

With only nine master fishermen left, a centuries-old tradition is at risk.
animals

Asian carp are a problem, but they're also dinner.
Video