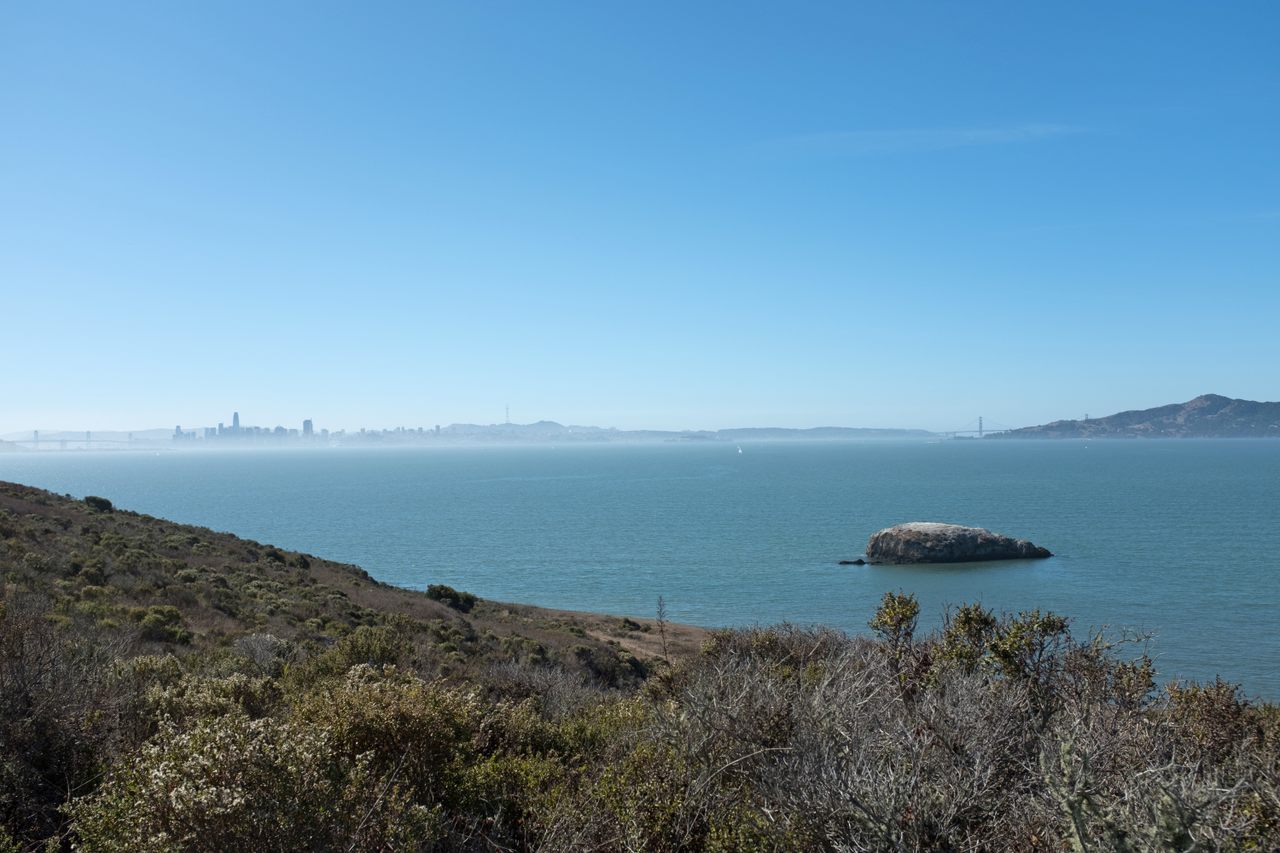 And yet it's only half a mile from the mainland. Britta Shoot

Matt Allen is sitting on the dock of the bay with his three-year-old pit bull, Honey, by his side, his fishing line bobbing in the cold, glittering water. Another fisher, an osprey, swoops overhead, and curious harbor seals occasionally surface. On this sunny afternoon, Allen is hoping to reel in some striper, jacksmelt, or halibut.

Despite the incredible panoramic views and abundant wildlife sightings, there’s no competition at this scenic spot. That’s because Allen is the lone human resident of Brooks Island, a 373-acre parcel of land and water in the San Francisco Bay about a half-mile offshore from the city of Richmond.

Allen, a youthful 47-year-old with a ruddy complexion and arms adorned with tattoos, is dressed in his standard uniform of crisp white T-shirt, faded blue jeans, thick black leather boots, and a baseball cap to shield his eyes from the bright sun.

After serving as an aviation electronics technician for four years in the U.S. Navy, he worked a variety of technical jobs and was repairing Ducati motorcycles—his favorite type to ride—when he was injured on the job and had to consider his next move. He hadn’t imagined it would be to his own personal island—at least not until an old Burning Man pal told him about the island-caretaker job ad nearly a decade ago.

Allen, who grew up nearby, took a two-hour tour of Brooks Island, which is shaped a bit like an elongated comma. “I’d been sailing around the island most of my life, but I’d never been on it,” he says.

After considering its 159-foot green chert peak and 360-degree views of the Bay Area, he agreed to move onto the tiny landmass—an islet the public can access only on trips led by naturalists with the East Bay Regional Park District, which owns and manages it.

When Allen first moved to Brooks Island nine years ago, everyone he met at the parks district had the same advice, delivered in the form of a warning: Don’t go crazy. That had happened to a previous caretaker. He had to be forcibly removed by law enforcement at the end of his tenure—airlifted away by helicopter when he refused to leave the island.

But Allen has something that minimizes the risk of rock fever: close ties to the shore. Many friends and family members, including parents and grandparents, live in the area. Loved ones get dispensation to visit the island any time they want, and many do. Allen’s nephew spent every Monday until he was four years old out on Brooks Island with his uncle.

The islet boasts about two-and-a-half miles of hiking trail and only a few other resident non-mammal populations, including Western garter snakes, alligator lizards, and anise swallowtail butterflies. There are no large animals on Brooks, but there is an invasive vole species—a favorite of the local raptors and owls, which can easily spot the voles’ ultraviolet urine tracks from high above. Six of the rodents were released in a 1950s population study on Bird Island, a tiny, barren outcropping on the northwestern side of Brooks. The study went awry, and at some point in the ensuing decades the voles crossed over to Brooks during low tide. They continue to thrive here today.

The island is perhaps best known for its colony of Caspian terns, which nest on a low-lying sand spit. “If you get too close to them they will dive-bomb you,” Allen warns. “I’ve had them attack my hat! No other bird here—not even the geese—will do that. They’ll all just fly away.”

Eighteen other bird species roost on Brooks, and over a hundred migrating ones—including brown pelicans, double-breasted cormorants, and black oystercatchers—use it as a resting stop.

Native scrub makes the island an area of interest for researchers, including members of the California Native Plant Society, who visit every spring. The sensitive, protected biodiversity—which includes soap plant, bunch grass, and wild lilac—is another reason why this is a permit-only destination. A few buckeye trees thrive here thanks to the two freshwater springs that make human life possible on Brooks Island. In Allen’s case, they provide water for washing, cleaning, and bathing—basically everything but cooking and drinking (the water he uses for that comes from the mainland).

But due to the island’s location, Allen says, a windward-facing stretch of sandy beach along the spit acts as a “trash can for the Bay.” The western shoreline is a magnet for items large and small: tennis balls, shoes, huge pieces of urban infrastructure. Inland from the beach, a small field of full-size utility poles marks a high-tide line. Most of Allen’s 75-foot boat dock is made from pieces of other piers that washed in over the past several years.

One recent afternoon, shore debris included a television, an onion, and the kind of heavy plastic sphere used for a patio umbrella base. Allen says that in his first months managing the island, the body of a canoeist washed up several days after a tragic incident at nearby Treasure Island.

If the contents of its shoreline are occasionally grim or mysterious, the island has a history that’s a bit less opaque. Based on the presence of two shell mounds, it’s believed that some 2,000–3,000 years ago, California Ohlone Indians lived—or at least fished and hunted—on the island. By the 1890s, Brooks was quarried to add fill beneath the Bay Bridge and at San Quentin penitentiary. In the 1960s, crooner Bing Crosby and “Trader Vic” Bergeron—perhaps best known for creating the mai tai cocktail—leased the parcel for sport. Members of The Sheep Island Gun Club could sail over from the mainland and shoot pheasants that its proprietors set loose.

In 1968 the parks district took over the plat, and in 1988 canceled the shooting club’s lease. Since 1991, it’s offered size-restricted group boating and kayaking tours a few times a year, between March and October.

Other unwelcome visitors to the island—that is, all humans without permission to come ashore—are kindly asked to leave by Allen. But every so often, trespassers are impolite. “When they want to argue,” Allen says with a friendly smile, “I tell them, ‘I’m the next step before you see a guy with a badge and a gun.’”

Each year he ends up rescuing paddlers and boaters who run ashore on the spit or get caught near the island in a storm. Boaters often turn up here without knowing exactly where they are, let alone how to get back into deeper, navigable waters. In a typical year, Allen might help out 40 or 50 individuals or groups. This past year it was closer to 60.

“That isn’t part of my official job,” he says. “But I’m a mariner, so I do it.” The same principle is applied when kite-surfing friends suddenly lose their wind and need a place to wait until it picks up.

Staying engaged with the public is another big part of keeping island fever at bay. Allen has his own personal fleet—six crafts, including a kayak and a boat docked at the Richmond marina, where his truck is parked. “I can even go to the Richmond Costco without my truck,” he says, explaining the ease of boating to shore and walking over to do his shopping.

Allen mostly keeps his own schedule—at least, when nature allows. “The tide is the No. 1 thing I deal with,” he says. The San Francisco Bay has a twice-daily tide that shifts about 45 minutes every day. The height fluctuates; so does the speed with which the tide rises and falls.

The tides also determine when Allen can come and go from his home. If he leaves the mainland too late, he’ll get stuck in the mud around the island. “The first year living out here, without planning to, I ended up sleeping in my truck in the marina maybe eight or nine times,” he says of not being able to get home. He doesn’t let that happen anymore, especially with his beloved Honey waiting for him back on the island.

“After nine years,” Allen says with a grin, gesturing at the bay waters around his island home, “this is all normal for me.”

See What the Pyrenees Look Like From an Antique Airplane

At least while the lions behave.
islands