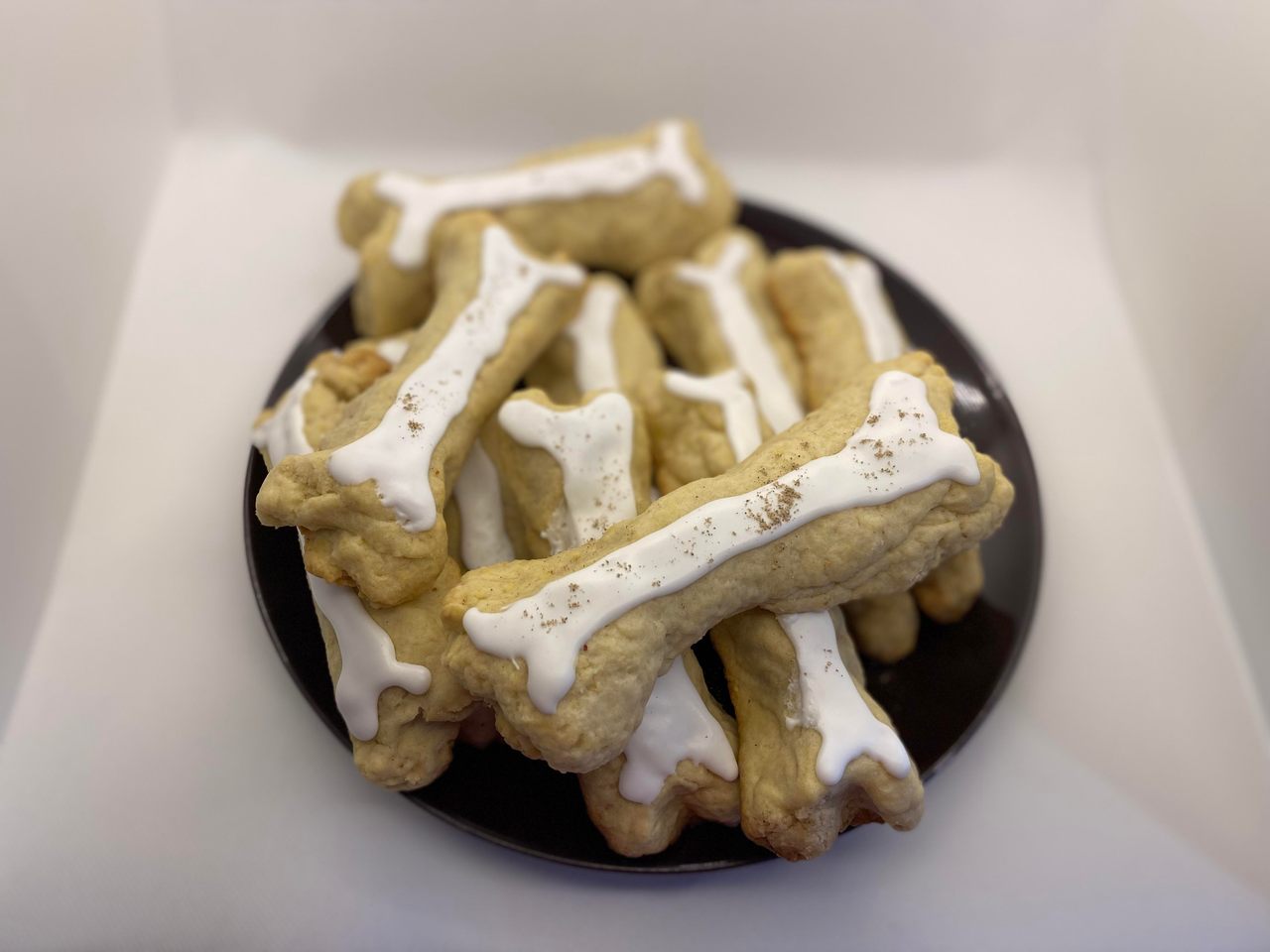 Maltese bone cookies are a tradition with a murky past. Alice Levitt

For more than 50 years, Baron Confectionery in Ħaż-Żabbar, Malta, has been crafting pastries. Often, they turn out flaky ricotta-or-pea-filled pastizzi or figolli, the colorful Easter-time sweets. But by the end of October, their treats take on a more macabre look.

Għadam tal-mejtin (dead men’s bones), or alternatively, għadam ta’ Novembru (November bones) are available not just here, but across the country throughout November. They are edible memento mori, part of Malta’s longstanding Month of the Dead celebrations.

The għadam look like chunky sugar cookies. They’re typically large enough to share, and, traditionally, each one is uniquely knotty—though some bakers now use cookie cutters to make them more uniform. The creviced dough is smoothed out by shiny white royal icing on top.

But the three-dimensional bone shapes hold a secret. The vanilla exterior gives way to a center that’s flavored with cardamom and clove, even aniseed in some versions. This second dough, made with almond flour, crumbles at the first chewy bite.

These unexpected flavors owe much to Malta’s location. South of Sicily and flanked by Tunisia and Libya, the country has been a hotbed for both traders and invaders since time immemorial. That, coupled with the fact that Malta is not rich in its own natural resources, means that many Maltese flavorings have roots in the Arab world, North Africa, and mainland Europe. The one major exception is the homegrown almonds that make the central “marrow” of the cookie so compellingly different from the sugary “bone.”

Marlene Zammit grew up near Sydney, Australia. But the blogger behind A Maltese Mouthful can thank both her parents for introducing her to their native land’s rich culinary heritage. Her family considered Halloween, with its costumes and candy, “really more of a thing for the younger generation,” she says.

Instead, they attended mass and prayed for the souls of the dead on All Souls Day, November 2. Though the Zammits were thousands of miles away from their family’s graves, people back in Malta celebrated by visiting loved ones’ resting places, neatening them up, and leaving flowers and other mementos.

But Halloween has slowly become a presence in Malta. “People move on and traditions change. It’s a living situation. We feel that this shouldn’t take place at the detriment to what makes us Maltese,” says Kenneth Cassar. The senior curator of MUŻA, Malta’s national art museum, is also a member of Taste History, a group of historians that works to preserve the country’s culinary traditions. The organization is part of Heritage Malta, the national agency that oversees the museums and cultural sites of the islands.

In Malta, November is unofficially considered the Month of the Dead. Għadam tal-mejtin are part of the festivities and available everywhere, from the bus station at the main island’s capital of Valletta to countryside pastry shops.

According to Cassar, it’s difficult to trace the precise origins of għadam tal-mejtin, because historical references only appear in snippets, and there are very few historical books on Maltese food. However, Zammit says that her recipes for cheerful figolli and għadam tal-mejtin are almost identical, save for the aromatic spices and bone shapes of the latter. Could they be siblings? Cassar thinks this is likely, which means that għadam tal-mejtin could date back as far as the 17th century, considering that the first mention he’s found of figolli is from 1660.

But why were they created in the first place? “It is very much typical to our way of life,” says Cassar. “It is tied in with fate.” In other words, memento mori are everywhere. Churches all over Malta are decorated with skulls and skeletons. The most famous, St. John’s Co-Cathedral in Valletta, sports marble floors that depict skeletons doing everything from wielding scythes to reading scripture.

Christianity has had a hold on Malta since the dawn of the religion, evidenced by the many early Christian catacombs around the island nation, most notably St. Paul’s Catacombs in Rabat. Even during Arab rule, from the 9th century until the Norman invasion in 1091, Christianity was never fully erased.

Cassar says that while the church always encouraged people from all walks of life to do good deeds, the pressure was stronger around November 2. Even children were traditionally called to pray for the spirits of the dead in purgatory, and were rewarded with sweets for their efforts. The existence of bone-shaped treats might have reflected local practices as well. Along with people visiting cemeteries, Cassar also recalls that churches once displayed empty coffins covered in black cloth in November to further remind attendees of the other side.

Cassar doesn’t believe that these rites have pre-Christian roots, as they are strongly linked to Catholic doctrine. In some ways, the rituals aren’t so different from the cemetery visits and pan de muerto of Mexico’s Día de los Muertos and the celebrations in other Catholic countries. But Malta’s version has evolved in unique ways, thanks to its separation from the mainland.

November food traditions weren’t limited to għadam tal-mejtin. According to Cassar, as recently as the mid-20th century, some communities would let a pig run free with a bell around its neck. Each home in the neighborhood would feed it leftovers and scraps when they heard it approach. Once it had reached its desired weight, the pig would be slaughtered, roasted, and served to the less fortunate as il-ħanżira tal-erwieħ, which roughly translates to “the sow of souls.”

Cassar and his team are now bringing Month of the Dead traditions to delicious life in modern Malta. Heritage Malta plans to host a dinner this year on October 28. It will feature roasted pig; maħluta, a bittersweet wine cocktail representing the joys and sorrows of life; and a kind of garlic bread, ftieti tal-għaża, that’s eaten when families are in mourning. Most importantly, there will be għadam tal-mejtin, Malta’s bone-shaped cookies, to serve as a reminder that life is short, so it may as well be sweet.

The Curse of the Viking Sally, the Baltic’s Most Ill-Starred Ship

Can a "dumb cake" help you discover your fate?
19th century

Pennywise, Art the Clown, and other modern, face-painted menaces recall an era when their kind were strictly adults-only entertainers.
plague

A city built on water was always going to struggle with burials—especially when a deadly pandemic came to town.
wunderkammers

Centuries after the philosopher’s death, lingering controversy over his remains highlights a macabre practice of profiting from the dead.
Video