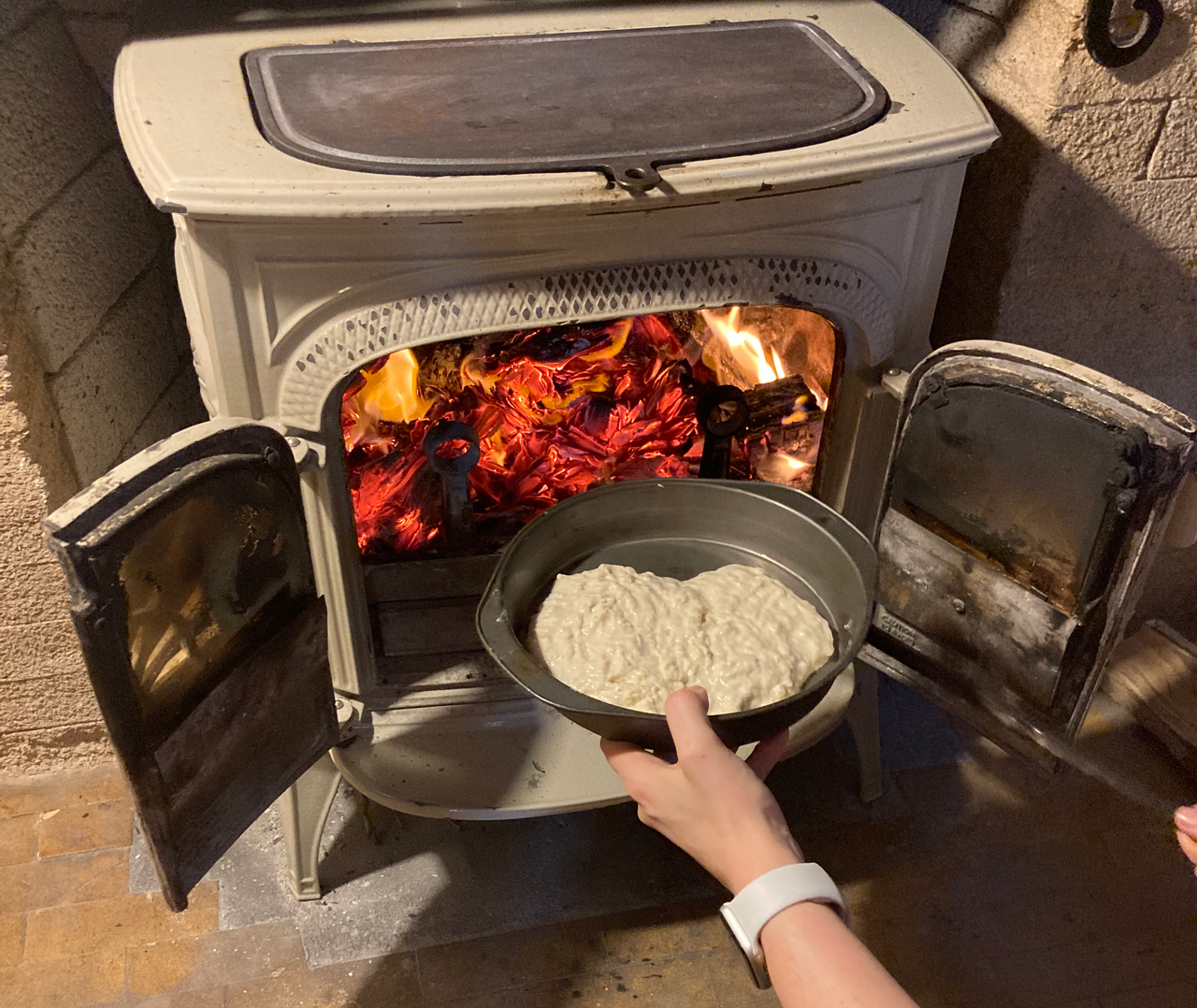 A lumpy dumb cake on its way to be baked. Anne Ewbank for Gastro Obscura

On one recent Tuesday night, I texted my friend Katie and asked her to come over to make some fortune-telling flatbread.

When she showed up, wary but game, I explained a bit more. We were going to bake a dumb cake. The name, by the way, isn’t meant to describe a poorly-thought-out pastry. Instead, it was the main event of a baking ritual conducted by young, unmarried women across the United Kingdom and North America from the 1700s up to the mid-1900s. Universally, the goal was the same: to discover the identity of their future husbands with what one encyclopedia called “a dreaming bread.”

Dumb cakes were once part of an enormous tradition of soothsaying foodstuffs. Rings hidden in cakes and mashed potatoes could reveal who was next to be wed, while an apple peel tossed over your shoulder might very well fall into the shape of the first initial of your future spouse. These traditions took place on the liminal, celebratory days of the year, when mystical or seasonal change was nigh: Halloween, Christmas Eve, and solstices, for example.

But making dumb cakes wasn’t often considered a fun party game for a group. Instead, it was more like a spooky, complicated sleepover game, such as “Bloody Mary,” the ghost-summoning ritual conducted with a mirror. But instead of seeing a gore-covered spirit, these duos or trios of girls hoped to see their future husbands in a dream.

The origins of dumb cake, and its close cousin, the dumb supper, are murky. Ruth Edna Kelley, the author of the first long-form history of Halloween, confidently claimed that it began on the Scottish Isle of Lewis. Scotland may not be too far off origin-wise, actually: Some writers tie dumb cakes to a tradition in the Scottish Highlands of making salty bannocks, or bread, on the Christian holiday of Shrove Tuesday in order to see one’s future sweetheart while dreaming. One of the earliest known written references to dumb cakes surfaces in Satan’s Invisible World Discovered, an 1685 book on witchcraft by George Sinclair. Sinclair, a demonologist and the University of Glasgow’s first mathematics professor, unflatteringly described it as a familiar superstition in the Scottish Highlands.

The source of the name is also uncertain. One interpretation is that “dumb” is derived from that word’s older meaning, which means “silent.” The other is that dumb comes from Middle English’s “doom,” for fate or destiny.

From the 18th to the mid-20th century, accounts of dumb cake–making proliferated through the press, folklore anthologies, and, occasionally, research publications. Many newspapers of note breathlessly described how to conduct the ritual, listing it along with other activities such as carving jack-o’-lanterns at Halloween or hanging mistletoe at Christmas. The common method, from my research, was as follows:

Two or three girls gather in a kitchen late at night. In complete silence, they must bake a simple cake consisting of flour, water, and salt. Every girl should mark the cake with her initials, then set it in the oven to bake without speaking a word. After pulling it out of the oven, the girls break the cake, sometimes each taking a bite, and then begin an odd march, backward to their beds. After setting the cake under their pillows, they should dream of their future husband upon sleeping.

For our dumb cake, Katie and I decided to use instructions from 1911, written by one Charles Dick:

The two must go to the larder and jointly get the various ingredients. First they get a bowl, each holding it and wash and dry it together. Then each gets a spoonful of flour, a spoonful of water and a little salt. When making the cake they must stand on something they have never stood on before. They must mix it together and roll it. Then they draw a line across the middle of the cake and each girl cuts her initials each on opposite sides of the line. Then both put it into the oven and bake it.

The instructions called for a third girl to put the cake pieces beneath our pillows, but we did without, since neither of us knew another 1) unmarried 2) girl who 3) would be willing to drop everything to bake a ritual cake on a 90-degree evening. To meet the odd “stand on something you’ve never stood on before requirement,” Katie balanced on a rickety stool that she kept stepping off of accidentally while I perched on a textbook. A slip of the hand during the water-adding step meant that our cake turned out goopy, without the firmness needed to initial the surface. In a quest for authenticity, we decided to bake the cake in my woodstove.

While it sizzled in a cake pan, my unsuspecting roommate and his friend walked in on us. As it turns out, it’s quite difficult to explain dumb cakes to someone when you’re bound by silence and using only hand gestures. During our attempt, we all suddenly noticed a burning smell.

The dumb cake, after only seven minutes in the woodstove, looked a bit too crispy along the edges while still gluey in the middle. We still broke it in half and each took a bite of our piece. Under the baffled gazes of our audience, Katie and I marched backward to my bedroom, where I solemnly placed a steaming, plastic-wrapped piece of dumb cake under my pillow while Katie put hers in a tote bag for later. Then, we decided to break our silence and explain to my roommate, Xavier, and his friend, Priscilla, what we were doing. (Priscilla, after sampling a leftover piece, said that it reminded her of the crust of an empanada.)

That night, I dreamed of absolutely nothing. It probably didn’t help that the dumb cake had slipped out from under my pillow and wedged itself in the bedframe. When I texted Katie to announce my impending spinsterdom, she shared that she had dreamed about stepping in dog poop.

But perhaps we were the lucky ones. Even accounts of successful dumb-cake summonings read like horror stories. Sometimes, the magical boyfriends showed up in person. One 1816 book described how “a few minutes after midnight, the husband of her who is to be first married will appear to lay his hand on the part of the cake marked with her name.” Other accounts declare that as soon as the bread is broken, a dark shadow will jump into being and chase the girls, and only by leaping into bed will they be safe from some unspeakable fate.

Sometimes, the magical boyfriends weren’t too happy to be summoned at all. In a 1913 article about folklore in Oxfordshire, England, Angelina Parker related the following harrowing tale:

An old lady once told me that a girl in this way brought her future husband, who was a soldier, into the room, and in passing through the doorway he broke his sword in two. The girl picked up the broken piece and kept it. After she had been married to him some years, in turning out her trunk she came across it, and showed it to her husband, and he was so angry he could hardly forgive her. He told her he suffered dreadful agonies during the time she forced him to appear, although he did not then know the reason.

Legends often spoke of the evil that girls would call down on their heads by using love rituals to look into the future. Those legends may have a worldly source. Before dumb cakes were lauded as an interesting folk ritual by newspapers, they were considered a nasty remnant of a superstitious, un-Christian past by clergymen and religious writers. One fascinating 1750 tome, subtly titled God’s Revenge Against the Breakers of the Ten Commandments, rails against “that execrable Way of making what is termed a Dumb-Cake … with a thousand other Tricks, in order to see or dream of their Sweethearts, which are still too much in use among young maidens, in order to satisfy their insatiable Curiosity and inexcusable Impatience.”

On some sad but rare occasions, dumb cakes could indeed prove deadly. In February 1813, three servant girls working at an English estate made their dumb cake with the addition of some unknown poisonous plant, perhaps hellebore or laurel. Late that night, their employers were drawn by screams to their quarters, where they happened upon the girls in agony, in a scene one account called “truly shocking to contemplate.”

One girl died that night, and while the others survived, newspapers still tut-tutted over them as “two deluded females.” It’s easy, both then and now, to shake our heads at such folly. But at a time when women depended almost entirely on marriage for economic and social safety, many of these girls had good reason to desire a peek into the future. To quote the writer of a sympathetic story about Halloween love rituals published in 1849, “A young maiden will go through a great deal in order to get some kind of answer to a question that so deeply involves her happiness.”

Whether you’d like to see your future spouse, or just alarm your roommates, here’s how to perform your own dumb-cake ritual this Halloween.

The cookies are just one way that the island nation remembers the dead.
food

When ‘Dumb Suppers’ Were a Halloween Love Ritual

The infamous ‘Don’t Ask Cake’ is better than it sounds.
19th century

Pennywise, Art the Clown, and other modern, face-painted menaces recall an era when their kind were strictly adults-only entertainers.
Video